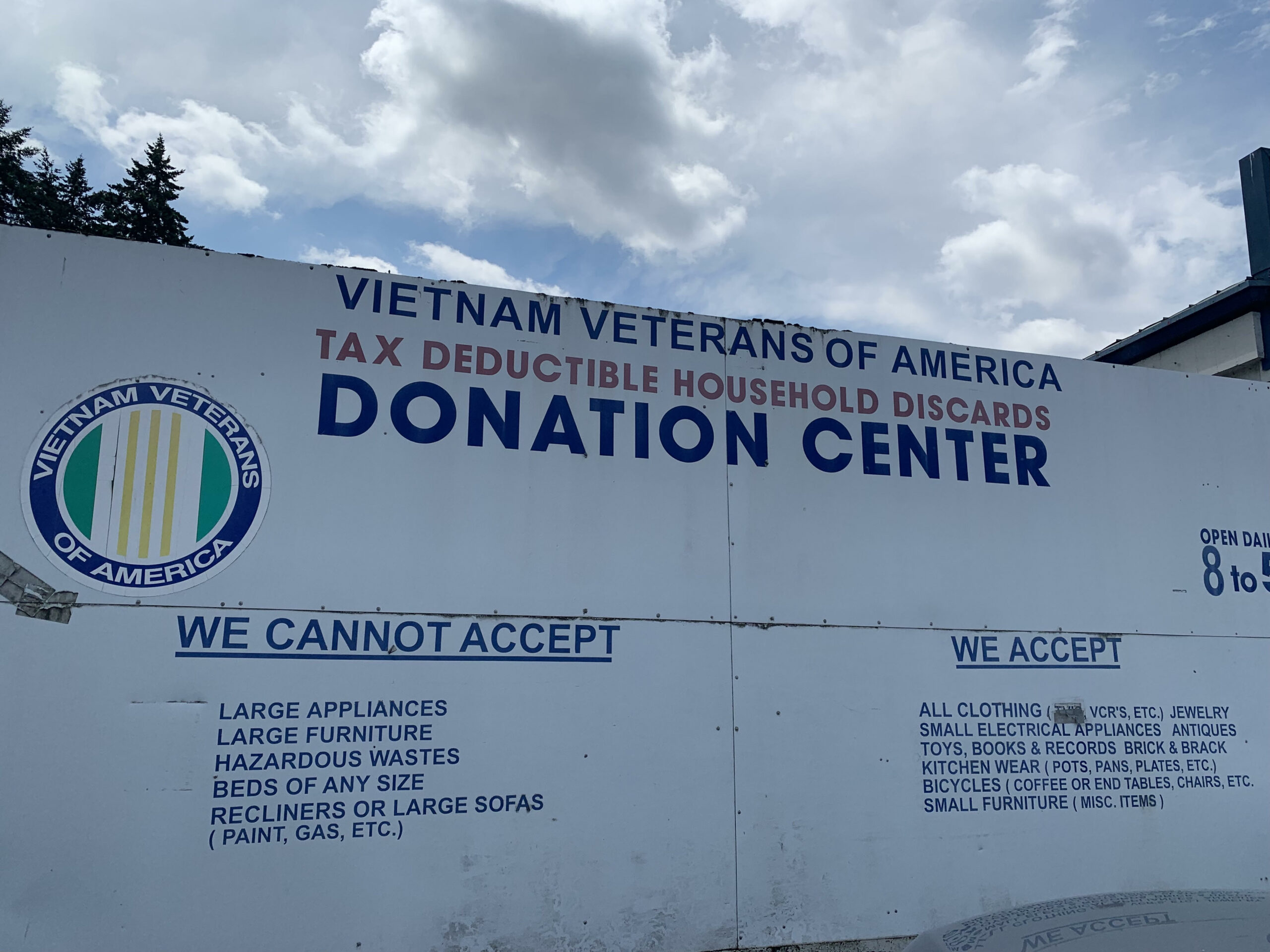 Charities like Goodwill and Salvation Army have traditionally dominated the $10 billion nonprofit thrift-store industry, but they face competition from a growing number of for-profit companies.

Even with shopping malls and brick and mortar retail stores rapidly going out of business, America’s retail scene is seeing fast growth of secondhand stores, especially the for-profit kind that are part of a $19.8 billion used goods industry.

“Demand has never been higher for used goods in the marketplace,” says Eric Farley, a consultant in the recycling and resale business, who describes an invisible river of goods crisscrossing the nation, collected from donation bins and home pickups primarily to for-profit sellers. “Every day, millions upon millions of clothing and goods are travelling in 50-foot trailers and rail cars from one market to another.”

Today, there are at least 500 for-profit thrift stores advertising some benefit to charity, owned by at least 20 regional or national branded chains, operating in the United States and Canada, according to an InvestigateWest count.

Because for-profit thrift stores don’t have a trade organization or other centralized tracking system, it’s difficult to know exactly how many exist. It’s an ever-changing landscape, as some stores open up shop and others go out of business—as a few have during the retail downturn, compounded by the pandemic economy.

Based on information from publicly available sources, including business reporting services Dun & Bradstreet Hoovers and IBISWorld, government records, and others, here are thumbnail sketches of those surveyed.

Bought by Alpine Investors, a San Francisco private equity company, in 2012, which owns 70% of the company.

Alpine Investors claim the thrift-store chain claims it gives a “significant portion,” to charities but its actual percentage to charity is not disclosed. Some of their ads claim that in-store purchases contribute to a charity. The charity receives a bulk rate based on donations.

Operates six stores in North Carolina with revenues of $1.2 million; ($23,000 for Carolina Value Village, Charlotte, NC.); $9.7 million according to Zoominfo.

National Kidney Services received a failing score by nonprofit watchdog Charity Navigator. Its percentage to charity is not disclosed.

Operates 40 stores and outlets in Texas and Arizona with revenues of $1.6 million, according to Dun & Bradstreet. Also does business as Thrift Land Inc.

Works with a pickup service, Charity Clothing Pickup. Another by the same name, operating in Florida, Massachusetts and Texas, partners with Vietnam Veterans of America. 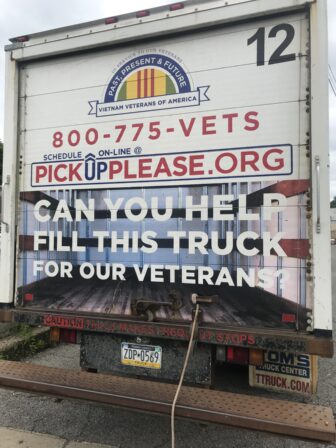 “Fill this truck for our veterans,” reads this vehicle in Pittsburgh. CharityWatch rates Vietnam Veterans of America an “F” because its accounting practices tend to mask its fundraising costs. (Credit: Robin Rogers)

Its charity partner is Vietnam Veterans of America. Stores go by the names Valley Value, Mile High and World Thrift.

In its disclosure to the state of California, the chain contributes 12.8% at its Community Thrift Store and 15.4% at its Valley Thrift Store in California, according to its 2018 filing, its most recent. The company posts signs disclosing that the stores operate as a for-profit corporation. 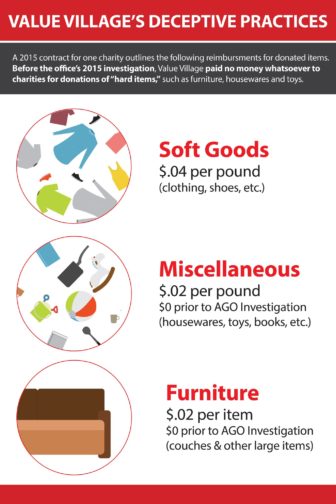 A graphic circulated on social media by the Washington State Attorney General’s office in December 2017 revealed that a couch you gave to Value Village’s donation center in Washington could be worth as little as 2 cents to charity.

Operating 295 stores in the United States, Canada and Australia, Savers, Inc. is the largest for-profit thrift store chain in the world with up to $1.67 billion in revenues, according to Dun & Bradstreet. According to Zoominfo, estimated revenues of this company was $3 billion.

Also known as TVI, Inc., it owns such subsidiaries as Apogee Retail, LLC. (a soliciting agent), Unique, and Village des Valeurs in Canada. TVI is, itself, a subsidiary of Evergreen AcqCo 1 LP, its corporate parent.

The Better Business Bureau has flagged the company for suits and government actions, and rated it with a C- in many locations because of these government actions and consumer complaints. Value Village/Savers declined to comment on this.

Does not market itself as a charitable organization online, but contracts with a pickup service, the ARC of Davidson County and Greater Nashville, which is a charity.

An affiliated solicitor, J & I Advisory, was fined in 2015 for misrepresentation by Tennessee Secretary of State’s Office.

Operates three stores in Florida with $3.66 million in revenues, plus another $25,000 in revenues from its Bradenton, Florida, operation, according to Dun & Bradstreet. Zoominfo states $13 million.

Its charity beneficiaries are unclear. Its website advertises that it buys from “worthy nonprofits.” It solicits customers: “When you’re ready to clean out your closet or simply change up your wardrobe, stop by one of our stores to recycle your gently worn items at the charity bin we host at each of our stores. Now more than ever, second hand shoppers are helping support their local communities and keeping perfectly good textiles out of landfills.”

Once operated 15 locations with $147 million in revenue, through Norquist Salvage, according to Zoominfo, but recently changed hands, reducing it to four locations in Texas and New Mexico.

Past charities included Big Brothers, Big Sisters, ARC, Las Trampas, but the current owner is exploring but has not yet worked out a charity partnership. The chain’s California filings reveal no charity partnerships at the moment.

Operates 11 stores in Ohio, with an estimated $42 million in revenues, according to Dun & Bradstreet. Its website states that it purchases its merchandise from “nonprofit organizations, liquidators, importers and local manufacturers.”

Charity beneficiaries include National Kidney Services of Ohio and nkfpickup.com. The amount it donates to charity is not disclosed.

Operating online with revenues of $28 million, according to Hoovers, and upwards of $500 million according to other online sources, such as Inc Fact. ThredUP is “a fashion resale website” giving consumers a chance to buy and sell their secondhand clothing online. Consumers may also donate.

The Better Business Bureau rates the company with an A, but has posted some cautionary reviews regarding donations. BBB cautions customers, some of whom have complained about difficulty receiving refunds and lower-than-expected payouts, to read the fine print in the company’s terms of use; it points out that ThredUp will automatically recycle your items if you fail to sign up for their “return assurance” policy.

That $5 bag that this store will “donate to your favorite charity” will be worth a lot more when given to a nonprofit store, said Kris Kewitsch, of the Minnesota-based Charities Review Council. 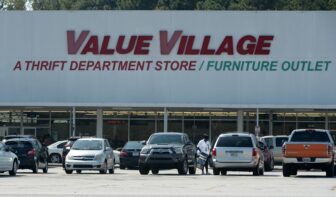 Operates 12 stores in Georgia and owns the trademark for the name “Value Village” under 2 Peaches Group LLC, which is listed in Dun & Bradstreet records as a freight-forwarding service with revenues of $3.2 million.

Charity partner American Kidney Services sent 18% of its revenues to the national American Kidney Fund in 2017, according to calculations based on its nonprofit 2017 tax return. It came under scrutiny by the Better Business Bureau for “Standards not met” in 2017, and in December 2019, BBB’s Wise Giving Alliance flagged the charity for misreporting fundraising costs as program. The BBB is awaiting a response. It received a failing score from Charity Navigator.

Operates 13 stores in Ohio and Michigan, and another in Dallas, with revenues of $3.7 million (Lakewood, Ohio), and $5.3 million (Value World, Inc. in Solon, Ohio), according to Dun & Bradstreet.

This story has been corrected to reflect that Zoominfo cites annual revenues for Savers, Inc., at $3 billion.