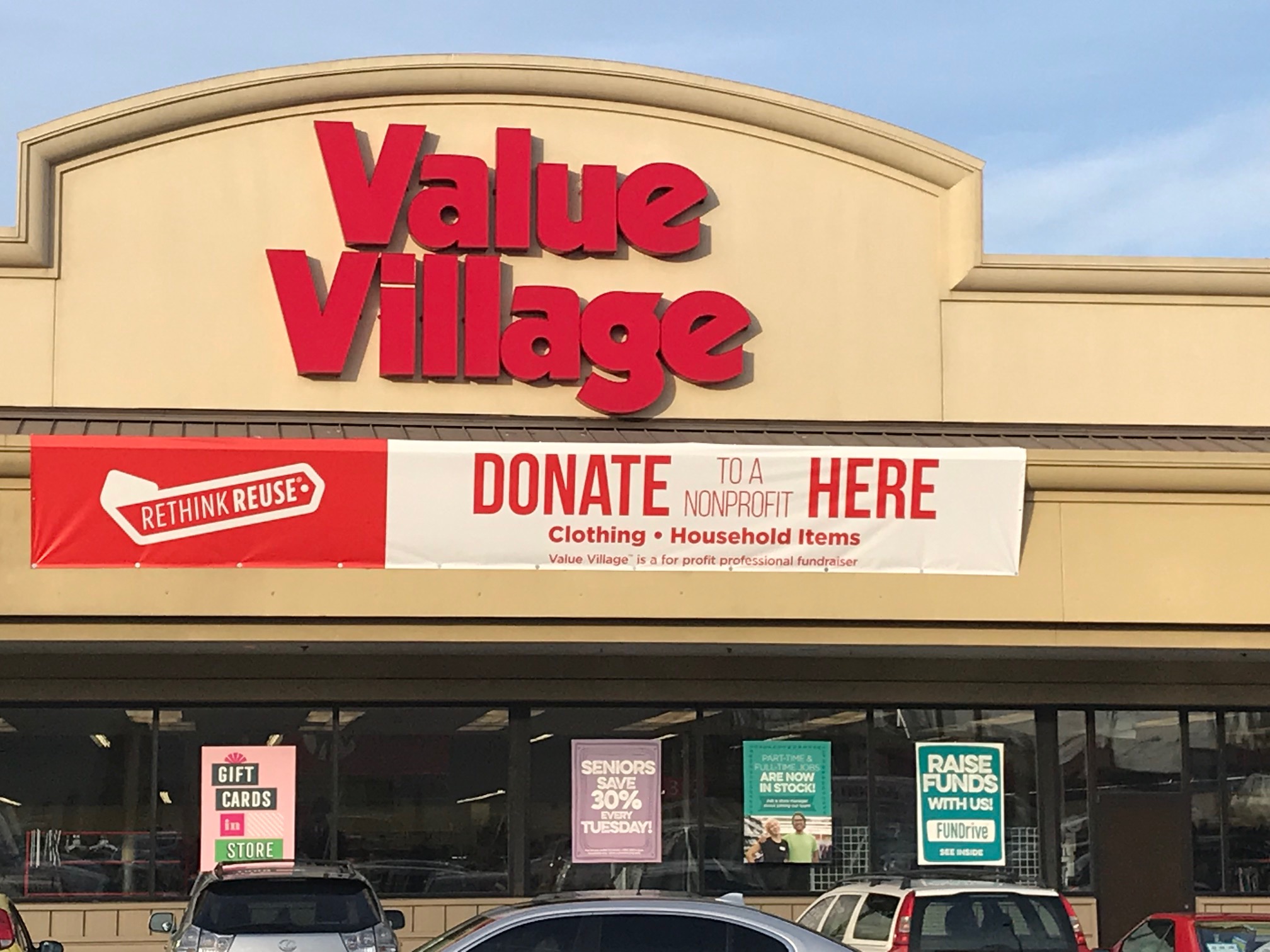 “The consuming public was deceived,” said Superior Court Judge Roger Rogoff during a 1 ½-hour verbal ruling before a packed courtroom.

The ruling in a long-running legal battle between Value Village and the Washington state Attorney General’s Office comes on the heels of Value Village’s announcement that it will close its last store in Seattle, the Crown Hill location.

With its corporate parents TVI Inc. and Savers Inc., the Bellevue-based chain remains the largest for-profit thrift store in the world, with more than 100 stores in the United States, including 20 in Washington, as well as about 200 in other countries.

Value Village has steadfastly maintained that it never misled consumers. The company is expected to appeal, and says its $170 million of donations to North American charities last year are proof of its model’s value to society. The company’s revenues exceed $1 billion per year, the state said.

State attorneys did not win every point in the case. But in a news release reacting to the decision, Attorney General Bob Ferguson said his side prevailed on a key issue.

“Value Village profited by misleading Washingtonians into believing that it was a nonprofit,” Ferguson said in a news release reacting to the ruling. “My office received numerous complaints from consumers who feel deceived by Value Village’s advertising.”

The judge’s verbal ruling appears to have settled four of the seven legal points at issue in Value Village’s favor.

“Value Village won the majority of the claims at trial,” said Rich Medway, Value Village general counsel and chief compliance officer, in a prepared statement released late Friday. “Value Village is proud of our business and we have operated with the support of our customers and non-profit partners for more than 50 years.”

Attorneys for the state argued that Value Village deliberately confused shoppers with promotional slogans such as “with every purchase or donation, you’re helping to make a difference in peoples’ lives.” In fact, though, as InvestigateWest reported in 2015, Value Village had agreements with charities to pay lump sums for donated used clothing and other items that would be sold by the thrift store for much more. 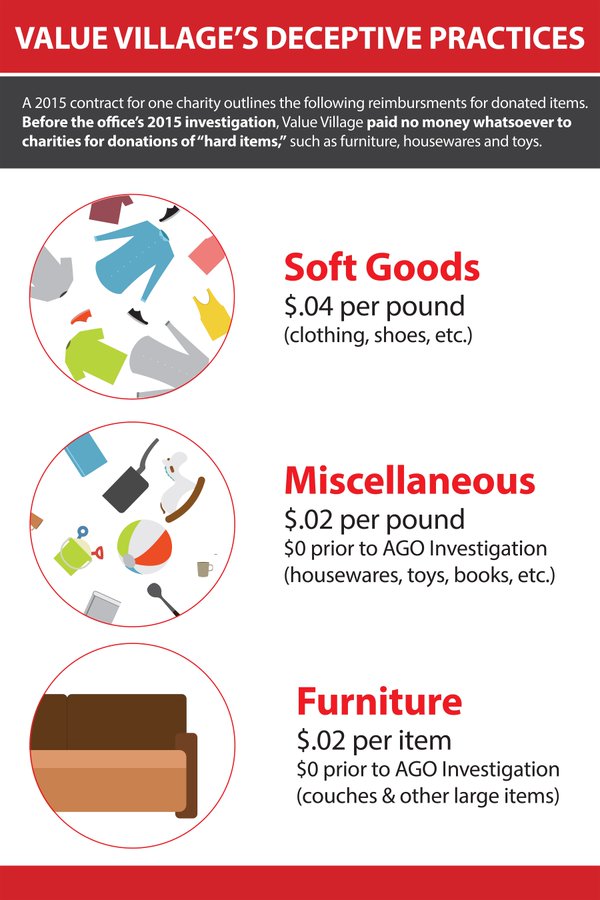 A graphic circulated on social media by the Washington State Attorney General’s Office reveals that the fancy piece of furniture you gave to Value Village’s donation center could be worth as little as 2 cents to charity.

For example, a necktie that Value Village might pay a nickel to buy from a charity sold for $4.99, InvestigateWest’s reporting showed. A vintage women’s top that cost Value Village a dime was priced at $9.99. Also, under many of the chain’s contracts, the charities were required to bring in household goods such as televisions along with the clothing, but were not directly compensated for those so-called “hard goods.”

This was a key point on which Value Village won in Rogoff’s ruling. He said the chain’s business model of paying a few dimes per pound for clothing and household goods it sells at a large markup is not illegal.

“Value Village has created a successful business model,” the judge said, adding that it has provided funding to charities through its purchases of donated goods.

But he said it was not legally permissible to then give shoppers the impression that most of the cost of the items was going to charity.

“They should have known that marketing in the way they did would give a deceptive net impression,” Rogoff said. “All of that gave people the sense they were” a nonprofit.

Rather than reading his entire 95-page-long ruling out loud, the judge delivered a summary. A written ruling is expected to be issued within the next two weeks.

One example of misleading advertising cited by the judge: “Good deeds, Great Deals,” which he characterized as making consumers “feel good” by conflating the stores with charities. He also pointed to the example of a huge banner that read, “These racks support more than just clothes.”  Promotional material like that, he said, falsely gave the impression that “purchasing is a charitable act.”

Value Village “knew clearly that its position in the market was subject to confusion by members of the public,” Rogoff said.

In fact, the store went to great efforts “to be technically correct,” Rogoff added. For example, even in the company’s employee training, he said, managers took pains to have employees say that donations were made “at” a store rather than “to” a store, showing that the company recognized the problem. Typically this involves a “community donation center” at each thrift store where donated goods are collected on behalf of a charity.

Nor is there anything wrong with TVI’s model of partnering with charities to recycle reusable goods, the judge said: “In fact we should have more companies doing these kinds of things to reuse unsalable items, to dispose of things they can’t sell.” He also said the system provides “steady, unrestricted funds for the charities.”

“It’s also a good way for American consumers to rid themselves of their unwanted goods,” Rogoff said.

One of the state laws the Attorney General’s Office cited in filing the lawsuit seeks to protect the public from deceptive charitable fundraising and governs whether organizations must register as a “commercial fundraiser.” Commercial fundraisers must report how much they raise for charity and what percentage they keep for themselves.

Based on documents obtained under the state Public Records Act, InvestigateWest’s 2015 “Profiting From Thrift” series traced how Value Village at least six times since 1987 fended off state officials’ efforts to have the company classified that way.

After investigating the chain’s practices, the Attorney General’s Office sought a $5 million fine for violations of state consumer-protection and charitable-solicitation laws. Value Village balked, offering just $700,000 — $200,000 to pay the attorney general’s costs and a $500,000 donation to a Washington State University research program on recycling waste from clothing, sheets and other cotton consumer items.

Value Village also pointed out that after the Attorney General’s Office launched its investigation, the chain took steps to better inform consumers and donors of its true status as a for-profit, including displaying signs explaining to consumers that the chain is for profit.

The resulting lawsuit sprawled over nearly two years and spawned the collection of more than 1,000 pieces of evidence, including Value Village promotional materials, more than 100 Facebook and Twitter posts and – importantly – a survey of consumers. The survey showed that most people were surprised to learn that the store isn’t a nonprofit, but rather a for-profit business reselling donated goods at a hefty markup.

“They are selling a used chest of drawers for $80 and they are going to give an organization 2 cents,” one shopper complained in the survey. “That’s awful!”

Also, 75 percent of Washingtonians in a focus group erroneously believed Value Village was a nonprofit, while nine out of 10 greatly overestimated the amount of money the company actually gave to charitable organizations.

Value Village attorneys hotly disputed the survey’s results, resulting in a battle of expert witnesses that Rogoff, acknowledging both sides had good points, said he was unwilling to resolve.

The evidence offered by the state included a similar lawsuit brought against Value Village’s corporate parent, Savers Inc., by the Minnesota attorney general. In that suit, Savers reached a settlement that allowed it to avoid admitting to charges that it deceived consumers. The company paid a $1.8 million settlement and agreed to better inform customers about its business practices. In addition, the company reports to Minnesota state officials the percentage of the value that goes to charity.

The company also has detailed how much it gives to charity to state regulators in a number of states including California, Colorado and Ohio.

In the Washington case decided Friday by Judge Rogoff, Value Village’s attorneys argued that the stores’ communications with customers were protected by the First Amendment’s guarantee of free speech. Attorneys for the state countered successfully that the First Amendment does not cover fraud or deception.

The InvestigateWest stories in 2015 and 2016 established that the proportion of Savers’ revenue paid to charities is likely between 8 percent and 17 percent, based on the company’s own statements, an examination of some of the company’s contracts with charities obtained by InvestigateWest, and estimates of revenues by private business research companies.