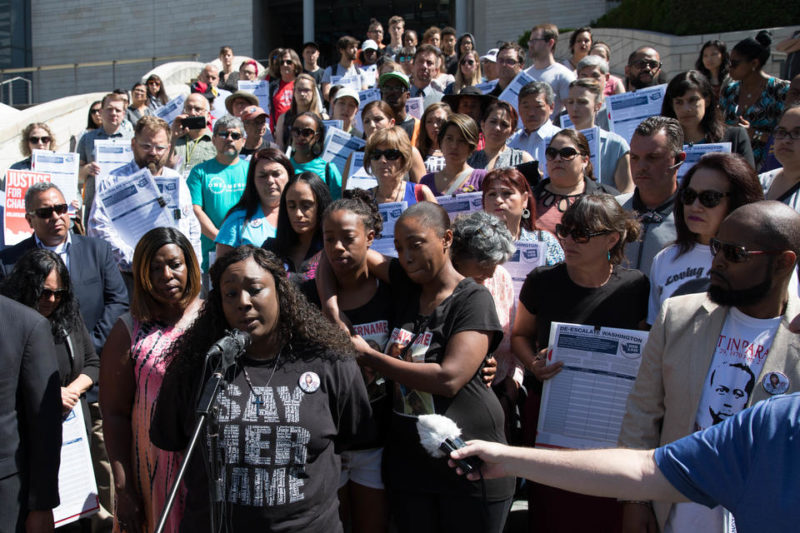 How can police minimize racial profiling of Native Americans, others?

Home » Indian Country » How can police minimize racial profiling of Native Americans, others?

In an era when movements like Black Lives Matter and Missing and Murdered Indigenous Women are calling attention to the life-and-death issues facing communities of color, it’s easy to overlook the impact day-to-day interactions can have on police-community relations.

But experts on bias and policing say when a racial or ethnic group is “over-policed,” which can include being searched at a higher rate than other groups, it can breed a mutual disrespect and distrust that becomes the basis for bigger problems.

That kind of treatment expands “that divide between you and law enforcement, who are people that are tasked to protect and serve you,” said Katrina Johnson, a Seattle criminal-justice activist. “They’re causing trauma, because you’re continually getting harassed or pulled over or whatever for nothing. You’re not doing anything. Who wouldn’t get tired of getting in trouble without actually being in trouble?”

An analysis of millions of traffic stops released this week by InvestigateWest found that Washington State Patrol troopers search Native Americans at a rate more than five times higher than white motorists. Black drivers were twice as likely to be searched as white drivers, and Latinos and Pacific Islanders were about 80 percent more likely to be searched. Yet white drivers were most likely to be found with drugs or other contraband. A similar analysis by Stanford University earlier this year that focused on black and Latino drivers found the same is true nationwide.

Nationwide, Native Americans are one of the groups most likely to be killed by police.

“It’s no coincidence that Native people suffer from both the highest rate of police violence nationwide and over-policing in Washington State,” Jesse Phelps, spokesman for the Lakota People’s Law Project, wrote in an email. “It’s all too obvious that racial profiling is alive and well throughout the U.S.

“Until we see more activism from the populace, better protections from elected officials and increased oversight from law enforcement authorities, people of color will no doubt continue to suffer disproportionately.”

There are steps police departments can take to address overpolicing and one of its underlying causes, implicit bias. They include:

Johnson knows firsthand about the rift that over-policing can cause with communities of color. As a leader in the fight to prevent more deaths like that of her cousin Charleena Lyles, who was killed by Seattle police in 2017, Johnson still felt disconnected from and distrustful of the people who were supposed to be protecting and patrolling her neighborhood. Months after Lyles’s killing, when her own home was burglarized, Johnson said, she was afraid to call the police.

When Johnson in August 2018 started her work with the Law Enforcement Assisted Diversion program, which refers low-level drug offenders to treatment instead of prosecution, she “probably did not believe that there was a possibility that officers were good,” she said.

As an activist, she traveled the country speaking with other activists and police leaders. But it wasn’t until she began working for the LEAD program last year, Johnson said, that she got to know rank-and-file officers. The work has helped her realize that some prejudices are unconscious, but police officers need to be able to openly address their biases, she said. Being in personal contact with police changed her, too.

“I just waved at a police officer. How weird was that?” she said during an interview at her office. “They’re not all bad. So I want a greater understanding of what’s happening during these interactions.”

Bias and cultural competency training “starts to humanize people,” Johnson said. “And it will make you think differently.”

The State Patrol offers a 50-minute anti-bias class to cadets in training, and officials said bias is addressed in other parts of training, including refreshers. They also said new curriculum, mandated by the I-940 ballot initiative that was approved by Washington voters last year, should be in place when the March cadet class begins next year.

Activists say if police officers are more reflective of the communities they represent, and live in those communities, it can improve relations.

To know whether training is working, academics who study bias say, police agencies need to set goals and have a way to measure improvements. A State Patrol collaboration with Washington State University showed that there were disparities in how often some drivers were being searched and would have allowed officials to track improvements, but those studies ceased in 2007.

Clayton Mosher, one of the WSU professors involved in the studies, said he believes they could be restarted for about $50,000.

“I think it is important,” Mosher said. “Of course, this seems to be the case nationally – while there, of course, has been some focus post-Ferguson, etc., the kind of work we did with the (State Patrol) does not seem to be occurring,” he said.  Oregon has just released its first report of this kind and could prove a model for routine analysis of similar data.

There are more immediate policy changes agencies can make that take officers out of situations where their biases might play out.

Chris Burbank, who served as the chief of police for Salt Lake City from 2006 to 2015, said traffic stops and minor citations sometimes become a form of “stop and frisk,” the infamous New York City policy from the early 2000s that encouraged police to question and search people based on a low level of suspicion. Officers were found to have disproportionately targeted black and Latino men and a federal judge in New York eventually ruled that the city was violating the Constitution.

In Salt Lake City, Burbank said, officers were issuing jaywalking tickets almost exclusively near a homeless shelter and were using the citations as an excuse to conduct searches, or as he put it “get in their pockets.” To address the problem, Burbank simply put a moratorium on jaywalking citations. Using minor citations as pretexts for searches is “shortcutting the police work” and wastes resources on frivolous searches, he said.

In October, the Los Angeles Police Department announced it was dropping a controversial policy, derided as “stop and frisk in a car,” of using traffic stops to look for contraband in high-crime areas. The department ended the policy after a Los Angeles Times analysis found the unit was disproportionately stopping black drivers. Last month, the Oregon Supreme Court ruled that questions unrelated to an officer’s reason for stopping someone violated the state’s constitution. Civil libertarians hailed the ruling, saying it would protect people of color who are disproportionately targeted for searches.

The Washington State Patrol regulations say troopers are required to get “clear and explicit” consent and give drivers a written explanation of their rights “where practical.”

Burbank suggested that police agencies can address racial disparities in searches by informing drivers of their rights before asking consent to search a vehicle or pat someone down — or by eliminating those so-called “consent searches” altogether, and requiring troopers to have probable cause before searching a vehicle. Or, Burbank said, agencies could go so far as to reduce or eliminate traffic citations.

“These are small steps you can take, and most of these can be done at the police department level by an administrator,” Burbank said. “You’re just holding the cops to a higher standard than what the law says.”

For its part, the Washington State Patrol says it’s considering once again partnering with an organization like Washington State University to conduct analyses like InvestigateWest’s. The State Patrol agrees there is a disparity in the search rate among blacks, whites, Latinos and Native Americans and that “is not acceptable,” said spokesman Chris Loftis. The agency is expanding its recruitment for diversity and recently hired a tribal liaison, with plans to hire another, Loftis said. He said the agency is committed to addressing the disparity InvestigateWest found, but said it will take time. The change that comes from new training programs and diverse hires is “more of a process than an event,” he said.

This story was supported in part by a grant from the Fund for Investigative Journalism.