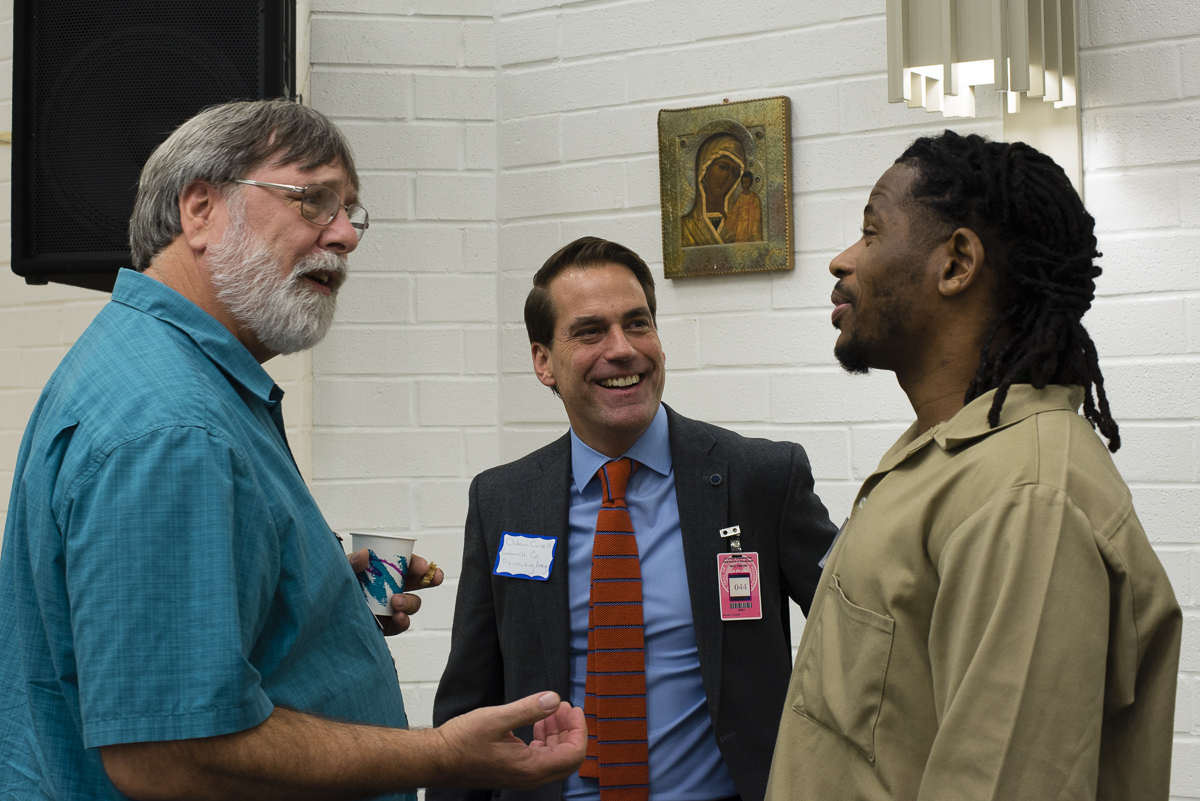 MONROE — Inevitable. That’s how winding up in prison felt for a group of former foster youth — now adults who are imprisoned at Monroe Correctional Complex.

The men, who are part of the prison’s “state-raised working group,” convened a half-day conference last week to explore how to sever the pipeline they say delivers too many from foster care to prison.

The state of Washington, as the de facto parent of foster children, must do a better job protecting, nurturing and educating their children, the men told the nearly 80 attendees, who included leadership from the state’s child welfare and juvenile justice agencies.

“What are these young people lives’ worth to society?” asked Ray, one of the 22 state-raised men who shared their stories and facilitated group discussions in the cavernous chapel of the 109-year-old prison in Monroe, Washington. “And what’s the cost to society if we neglect to invest [in these youth]?”

For Ray and the others, their trajectories began with childhood abuse or neglect that brought Child Protective Services to the door. At least one was born in prison. Most cycled between foster homes, group homes, homelessness and juvenile detention — where several said they experienced further abuse.

Few got an education beyond the eighth grade. Many remained in foster care until they “aged out” at 18, when state support ended and they were on their own, with no job skills or support system. Even as teens, many already had a lengthy rap sheet. 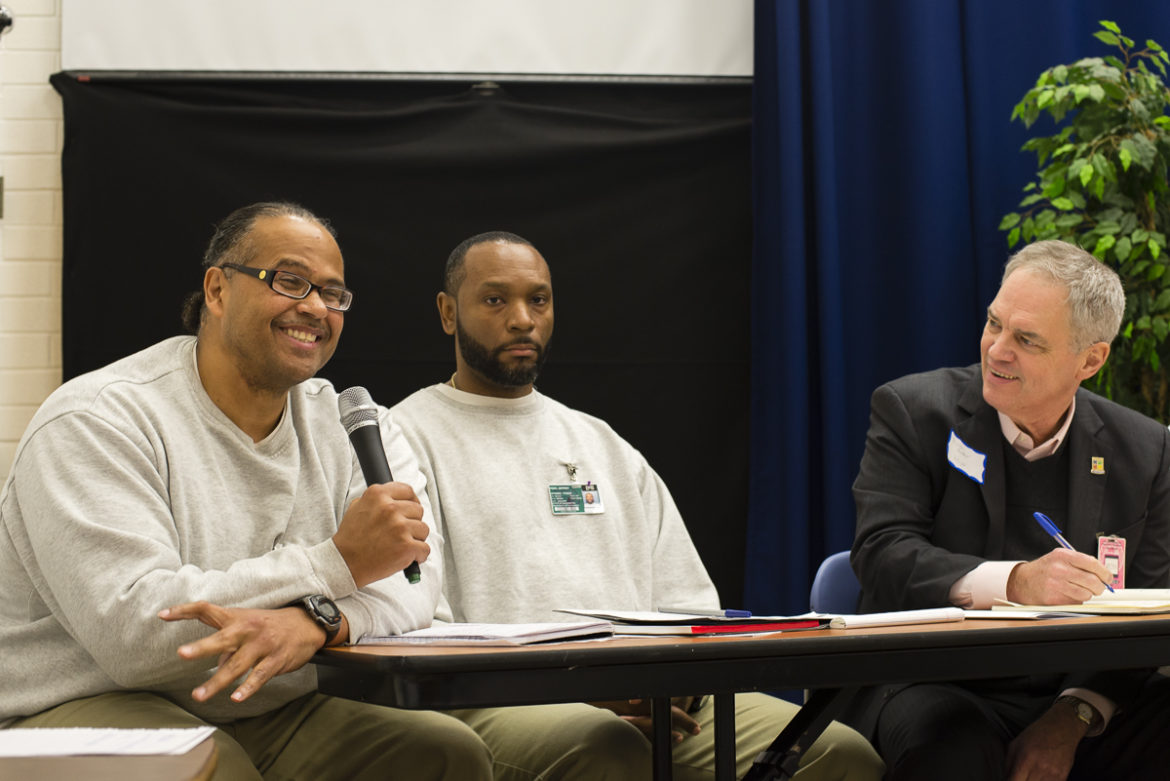 Percy Levy (left), who was born in prison and “aged out” of foster care, speaks about the importance of children’s first interaction with a social worker as part of a panel discussion on preventing the foster-care-to-prison pipeline, as Jeff Fox (center), and Department of Children, Youth and Families Secretary Ross Hunter (right) listen. (Photo by Allegra Abramo)

Along the way, they became inured to the experience of incarceration and learned to distrust adults, they said.

“Where the hell else were these kids going to end up?” said Nick Hacheney, of Monroe’s Concerned Lifers Organization, a group of inmates of who advocate for changes to the criminal justice system.  “Unless there was some miraculous intervention, they were going to end up right here in prison.”

Many young people incarcerated in the state’s juvenile rehabilitation facilities, which house youths facing longer sentences for serious or repeated crimes, are already well along the pathway from foster care to prison.

About 40% have experienced foster care, said Marybeth Queral, assistant secretary for juvenile rehabilitation at the Washington Department of Children, Youth and Families. And nearly 80% of youth in the facilities have been the subject of Child Protective Services investigations. The number of adults in state prisons who experienced foster care is not available.

“The child-welfare-to-prison pipeline is alive and well,” Queral said during a breakout discussion.

She noted some positive steps, such as a state law passed last year that reduces the crimes for which juveniles can be charged as adults and allows them to stay in juvenile facilities until age 25. But funding and staffing shortages are barriers to providing the services these youth need, Queral said. 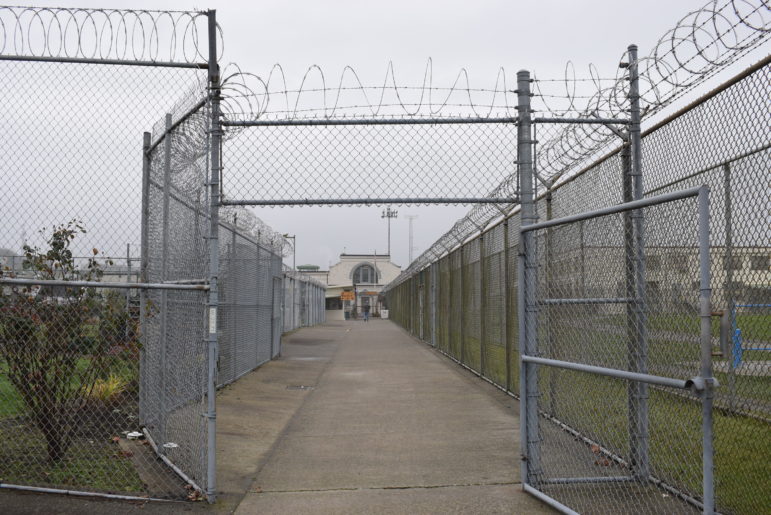 “The language I would use… is constitutionally inadequate,” Hunter said. The per-child funding in institutional schools is significantly less than in regular schools, he said, despite the high needs of many detained youths, half of whom qualify for special education.

“It’s terrifying to me that we have this system, and we expect kids to come out of juvenile rehab and launch themselves back into the normal public education system,” Hunter said.

State-raised group member Ray said he was sent to adult prison at age 17 and released three years later to a homeless shelter, still with just a sixth grade education. He is serving a life sentence after “three strikes” for assault and burglary convictions, including one when he was 16.

(The Department of Corrections made news media access to the event at the prison contingent on not using select inmates’ last names. “Our policy is that it is the right of the victim to be free from the traumatization they might feel if they view the incarcerated individual who victimized them on TV or in other media,” Susan Biller, a spokeswoman for the agency, wrote in an email explaining the restriction.)

“I would like to see state-raised youth have special funding set aside for their post-secondary educational needs,” he said, “so they can get out and be the contributing members of society that I know they can be.”

Foster youth coming out of public schools often don’t fare much better. In Washington, less than half graduate from high school in five years, said Dawn Rains, chief policy officer for the nonprofit organization Treehouse, which has significantly boosted graduation rates among foster youth by providing them with mentors. 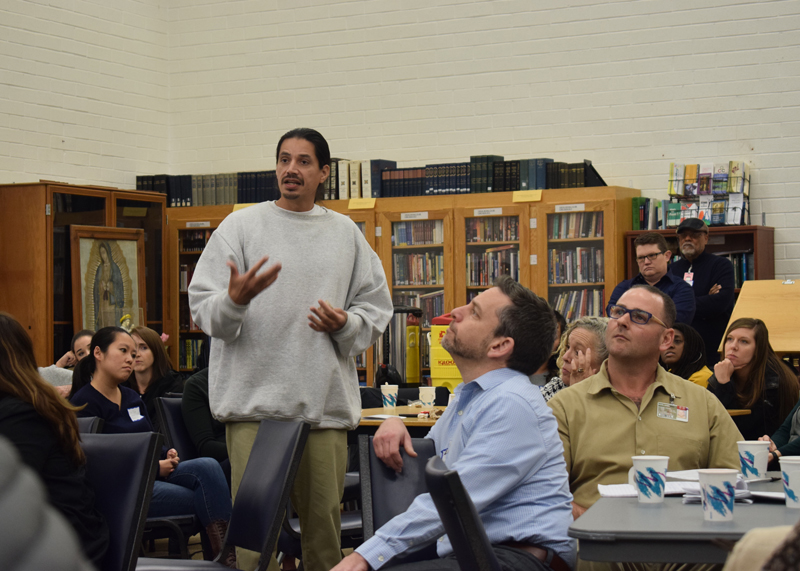 Carlos Heureca, a member of the “state-raised” group at Monroe Correctional Complex, suggests that group homes provide mentors who have “been there and done that” during a panel discussion on ending the foster-care-to-prison pipeline. (Photo by Jesse Colman/Treehouse)

Having the sort of consistent, reliable adult in their lives that Treehouse provides is critical for foster youths, a number of the men noted.

Instead, many  foster kids endure frequent changes in their foster homes, case workers and schools, leading to an untethered existence where it is difficult to learn and prepare for a successful adulthood.

Some of the incarcerated men said they didn’t get the mentoring they craved until they landed in prison.

“When we were in foster care, we felt that we were alone,” said Faraji Blakeney, a member of the state-raised group. “And when we came together and were allowed to be vulnerable and share our experiences, we found we weren’t alone.

“But why did it take prison for us to find out that we’re not alone?”

The state-raised group launched four years ago under the aegis of the Concerned Lifers Organization, which has operated at Monroe for about 45 years.

Hunter, who has met previously with the men, said in an interview that their insights have “changed how we do stuff in juvenile rehabilitation.”

For example, he said, the department is working to ensure that youths who will be released from detention into foster care can build relationships with the people they will live with afterward.

“I just love how thoughtful these guys are,” Hunter said.

In the long run, he told the crowd, he wants to lower the number of children in foster care from the current 9,000 and shorten the time they are there. That will require strengthening families so that they can safely keep or reunite with their kids, he said.

“If we remove fewer children, we’ll need fewer foster parents,” Hunter said, alluding to the state’s ongoing shortage of foster families. “And perhaps we can be more selective” about who gets licensed to be a foster parent. 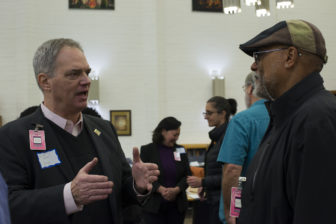 In an interview after the event, Judge Wesley Saint Clair, who presided over King County Juvenile Court until retiring in March, said institutional racism is “the elephant in the room.” Racism affects all of our systems, he said, including child welfare, schools and courts.

Black and brown children are overrepresented in foster care and linger there longer, Saint Clair said. In the courts, they are often sanctioned more harshly, and in schools they are the first to be kicked out, he said.

“And as long as we’re not willing to address the biases,” he said, “it’s going to be a continuing, everlasting conversation.”

For youths who received life sentences when their adolescent brains were still developing, Saint Clair added, the courts have decided that they need to be able to revisit those sentences.

That’s exactly what the state-raised group would like to see happen for people who entered prison before age 25 and already have served decades.

“Let’s take a look at this individual, and see if it’s just that we keep this person in prison for the rest of their life, when… the state was involved in how they got to where they are,” Hacheney said.

This story is a collaboration with Youth Today, the national news source for youth service professionals, including child welfare,  juvenile justice and out-of-school-time programming.
This story has been corrected to say that many foster children endure many moves from one foster home to another, rather than most foster children.