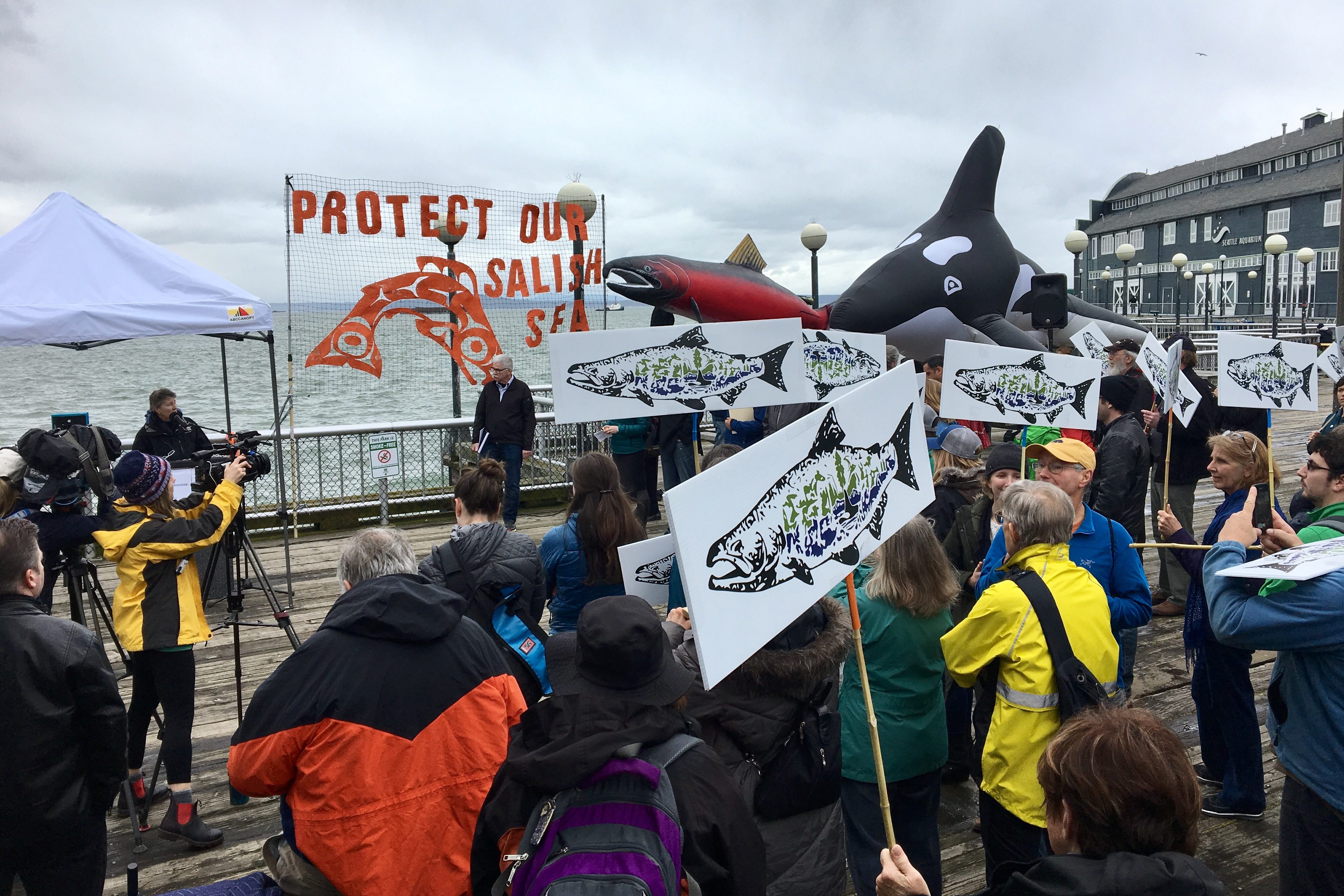 Trump is not the only one cutting Puget Sound funding

OLYMPIA – President Trump’s proposed $28 million cut of Puget Sound restoration funding has provoked an outcry. But Gov. Jay Inslee himself is proposing a $29 million cut to the program.

Loss of federal funding for Puget Sound restoration is not the only cause for concern. State funding, which pays for a much larger share of the restoration costs, also is facing cuts.

Citing loss of federal dollars and income from hazardous substance tax revenues, Inslee is proposing to spend $29 million less on the Sound cleanup and restoration than in the previous bi-annual budget. The Legislature is set to follow suit with cutbacks of its own.

In his last biannual budget proposal in 2015, Inslee asked for roughly $176 million more than he’s asking for this time around. Though funding requests by program managers always are higher than the governor’s proposal and the final budget, this year’s gap between agency requests and the governor’s proposal is the largest in a decade: a $362 million shortfall. Inslee’s budget was drafted before any proposed federal cuts were known.

What’s happening to Puget Sound funding is not an anomaly. The state has been spending ever less on all of its natural resource protection/restoration programs. Over the last decade, the percentage of the state general fund spent on natural resource programs – tiny to begin with – has been halved.

The natural resource agencies are one of the few general fund categories where expenditures have shrunk – from 1.6 percent of the general fund budget to .8 percent. Strong budget pressures from the education funding crisis are expected to make matters worse. 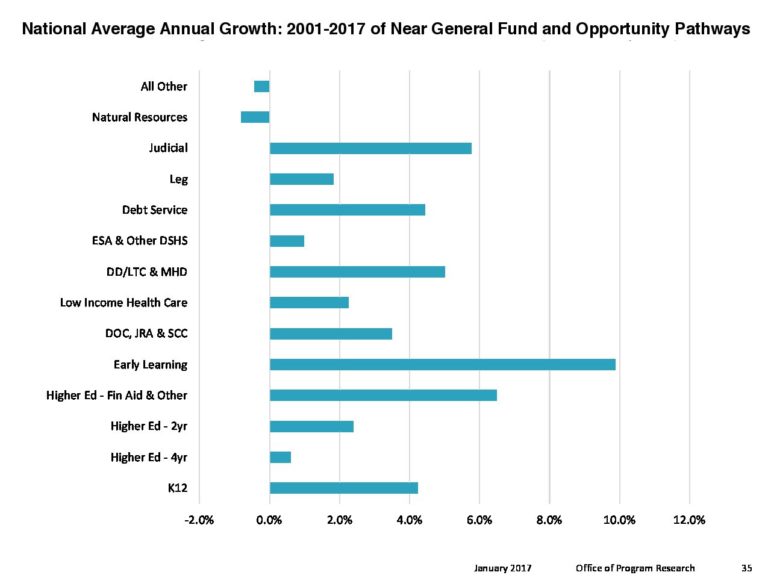 Graph of average annual growth of major program categories in the state general fund. Source: January 11th presentation on the operating budget to the House Appropriations Committee by the Office of Program Research.

“Over the last decades we’ve seen environmental programs getting reduced general fund support every biennium,” says Darcy Nonemacher, legislative director of the Washington Environmental Council. “The general fund is the foundation of state budgeting. It gives you long-term reliability that your programs are a priority.”

Instead of long-term reliability, though, the state’s strategy has been to shift to dependence on less stable funding sources for natural resource protection. Tax funding for the Model Toxics Control Act, for example, is tied to the price of oil. In 2014, oil dropped from $104 to $30 a barrel, according to the state Department of Ecology. The drop cost the state hundreds of millions in lost revenue over the next four years.

Puget Sound restoration efforts have been going on for more than thirty years, but funding has never met the level of need, according to restoration proponents. In 2007, the state set a goal of restoring the Sound by 2020. Though improvements have been made, that goal will not be met, and further funding cuts may jeopardize the gains that have been made.

The list of Puget Sound priorities in the state budget is massive. It includes more than 75 programs across nine state agencies. Stormwater treatment, salmon recovery, cleanups and research are just part of the restoration effort. All told, this job would be done with $539 million in the upcoming biennium, according to the governor’s budget request.

The responsibility for overseeing this complex effort falls to the Puget Sound Partnership, a tiny 10-year-old state agency that determines restoration priorities and coordinates the effort.

It has no regulatory authority. The Partnership itself is among the underfunded programs. Last year the Partnership saw a large funding cut from the Environmental Protection Agency, which had been providing roughly half its budget. The Partnership estimates it is now $7 million short of funds needed to fulfill its mandate.

Inslee’s budget for Puget Sound, while leaner than his previous ones, includes $900,000 of new state funding to fill staffing gaps at the Partnership that were created by an EPA funding cut of $1.9 million last year under President Obama.

“If the feds withdraw from that partnership, it would be a step in the wrong direction.”

In the previous biennium, the Partnership had a $18.8 million budget, 60 percent of which came from the EPA’s National Estuary Program and the National Oceanographic and Atmospheric Administration (NOAA). Trump’s budget calls for massive cuts to both of those sources of funding, which have been some of the most stable for Puget Sound restoration. The National Estuary Program provides an average of $25-30 million per year for restoration.

Dennis McLerran, the former EPA region 10 director in Seattle until Trump took office, says “$28 million per year is not chump change.” And losing it has large ripple effects, he adds. That’s because restoration programs are intertwined, designed to receive funds from all levels of government. When the federal piece is taken away, the highest regulatory authority disappears, explains McLerran. Then the matching fund requirements go away, sending the message to state and local government that the federal government hasn’t made this a priority, so they don’t have to either.

“If the feds withdraw from that partnership, it would be a step in the wrong direction,” he said.

The $28 million Trump’s budget would cut makes up nine percent of funding when combined with the annual state budget for Puget Sound restoration. But it’s only the beginning.

EPA funding and staff help manage Puget Sound restoration efforts, including overseeing Puget Sound cleanup sites. Trump’s proposed 31 percent cut to the EPA budget would severely cut back on staff, eliminating one in five agency jobs. Locally, that means trouble for the EPA’s Bellevue office, which oversees the Puget Sound area. It took on some of Ecology’s cleanup site management duties when Ecology’s funding was cut.

“We haven’t built up the other resources enough to make up that difference.”

Ecology could face additional cuts as well. For the 2015-17 biennium, federal funds from the EPA provided 21.8 percent of Ecology’s budget.

And then there’s the new Puget Sound Federal Task force, created in September 2016. Supported by the Obama administration, all of Washington’s congressional representatives and led by congressmen Denny Heck and Derek Kilmer, it was created to provide stronger federal support and commitment for Puget Sound restoration. The program is set to start this year, and also receives its funding from the EPA, though from a different pool of money. But with proposed EPA funding cuts, whether its action plan will get off the ground is now up in the air.

Budget cuts to NOAA could be even more detrimental to Puget Sound recovery than those to the EPA. Some of the biggest gains Washington has made in Puget Sound recovery are from salmon recovery efforts, and much of that is funded through NOAA. It’s expecting a 16 percent budget cut under Trump’s proposal.

“It’s the cornerstone for the funding pyramid, and if you pull that one out everything else starts to fall,” said Cathy Cochrane, communications lead for Puget Sound Partnership, said of the NOAA funding. “I think that can be said of the federal funding of the EPA money too,” she added, explaining that federal funding is a crucial piece of the restoration effort because the programs so collaborative. “The sudden withdrawal of that money leaves us without other resources. We haven’t built up the other resources enough to make up that difference.”

What happens if federal funding is cut and the state doesn’t step up to replace it? According to McLerran, complex, multiyear programs that have been years in the making may stop, even if funding only dries up for one to two years. And, he explains, if those do, don’t expect them to just start right up again.

The governor’s leadership can only go so far, though. The state’s investment in Puget Sound comes down to funding, which is controlled by the legislature. And its recent budget numbers tell a story of declining commitment.

This story is part of InvestigateWest’s Statehouse News Project, a crowdfunded effort to provide independent reporting on the Legislature. Please support the project with a tax-deductible donation at invw.org.

This story has been corrected. It erroneously stated that the governor’s 2013 and 2015 biennial budget requests for Puget Sound restoration efforts were roughly $200 million higher than his 2017 request. The 2015 request was $176 million higher and the 2013 request was $46 million lower than the 2017 request. It also originally stated that natural resource agencies were the only major category of general fund where expenditures shrunk over the past decade. They are one of a few categories where expenditures have shrunk.