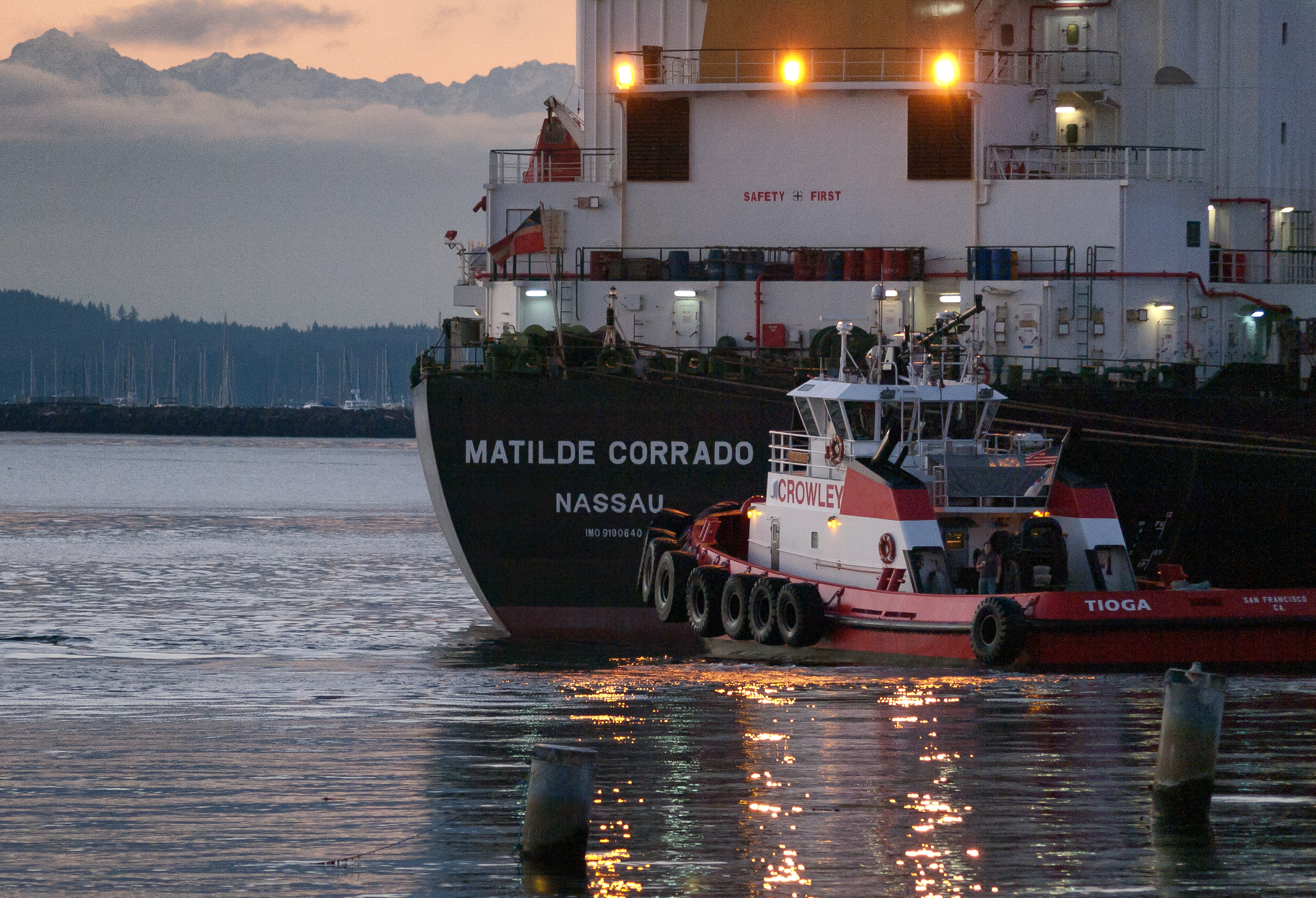 Every week, a barge laden with a crude oil called dilbit makes the journey from Vancouver, B.C., to Tacoma, winding its way through the passages of the San Juan Islands to southern Puget Sound. If the dilbit aboard spills into water, it will sink to the bottom, attaching to sediment. This makes it much harder to clean up than other oil spills.

That weekly trip of dilbit – bitumen diluted with natural-gas condensates containing naphtha – and other oil traffic through Washington’s ecologically sensitive Salish Sea soon will be much more frequent, as often as every day.

With the expected expansion in capacity of Canada’s Kinder Morgan pipeline from Alberta, oil vessel traffic through the Salish Sea is expected to increase seven-fold, according to a vessel traffic study by two university researchers. And Washington, environmentalists and other concerned citizens say, is ill prepared to handle the added risks.

All large oil tankers plying the waters of Puget Sound are required to use tug escorts. But smaller vessels, such as articulated barges, which are newer and come outfitted with more safety features, are not – even though they can carry as much oil as small tankers and are run by a smaller crew. They too will be used more frequently.

Thursday (March 30) in Olympia the House Finance Committee voted a measure to require tug escorts for articulated tug barges and other smaller vessels between 5,000 and 40,000 deadweight tons out of committee. HB 1611 aims to address some shortcomings in the state’s oil spill prevention program. It would improve safety requirements for water transport, including mandating tug escorts for oil-transporting vessels. It also would tighten safety standards for pipelines and provide additional funding for the oil spill program administered by the Department of Ecology.

Strong opposition from Republicans in the Senate means the bill faces a steep uphill climb, its sponsor, Rep. Jessyn Farrell, D-Seattle, acknowledges. She failed to get similar legislation passed two years ago, instead passing a bill that improved safety only for oil transport by rail.

“I do think that there is a narrow path but I will be honest, it is a heavy lift,” Farrell said.

That heavy lift is in no small measure due to the bill’s proposal of a 2.5 cent increase in the state’s existing oil barrel tax, bringing it to a total of 4.5 cents per barrel.

The bill is opposed by railroad, petroleum, and business interests. The Western States Petroleum Association argues that the barrel tax is an unfair way to fund the safety measures. Oil is not the only industry that these safety measures will apply to, the association argues, and nor is it the most likely to spill. The association points to data from the U.S. Coast Guard showing that from 2005-2015, fishing and recreational vessels were responsible for the most incidents of oil spills in Puget Sound, not oil transport vessels.

“The way we move oil cross state and across water is rapidly changing.”

This is not the first time Washington has made efforts to improve oil transportation safety. In 2015, state legislators passed a different Farrell bill to improve safety for rail transport of oil, in response to 2012 increases in oil entering the state by rail. Originally that bill also contained Farrell’s measures dealing with water transport, but those were removed.

Since then, two important things have changed: Canada approved the Kinder Morgan pipeline expansion and the United States lifted a 40-year ban on crude oil exports.

Washington’s four northern refineries, located in Whatcom and Skagit counties, are connected to the Kinder Morgan pipeline, though the main pipeline terminus is in Vancouver. Already existing improvements in pipeline pumping capacity over the last decade increased the share of crude oil coming into the state by pipeline from 9 to 24 percent from 2003 to 2013, according to the Department of Ecology.

“The way we move oil cross state and across water is rapidly changing,” says Farrell.

The lifting of the American export ban opened opportunities to increase volume of oil moving through this state’s five refineries. Environmentalists say they worry that, absent the crude oil export ban, refineries also could begin to act as crude oil export terminals, in addition to processing plants, without having to go through a review or permitting process. This would increase the amount of crude oil moving through the state. A provision in the bill would require refineries to alert the public and update safety measures if the refineries begin exporting crude.

“They would essentially be acting as a dock,” says Rebecca Ponzio, oil campaign director for the Washington Environmental Council. “That changes the landscape significantly.”

A coalition of supporters of Farrell’s bill include not only firefighters but residents of communities near refineries and former refinery worker union representatives.

Steve Garey, a retired refinery worker and former union chief, spoke on behalf of the Blue Green alliance at a February hearing on the bill.  “We know how bad it can get with these substances and we know how quickly it can get bad… We know that sufficient emergency management resources are essential, and that we cannot be properly prepared without them. The provisions in this bill will help ensure that we are properly prepared.” 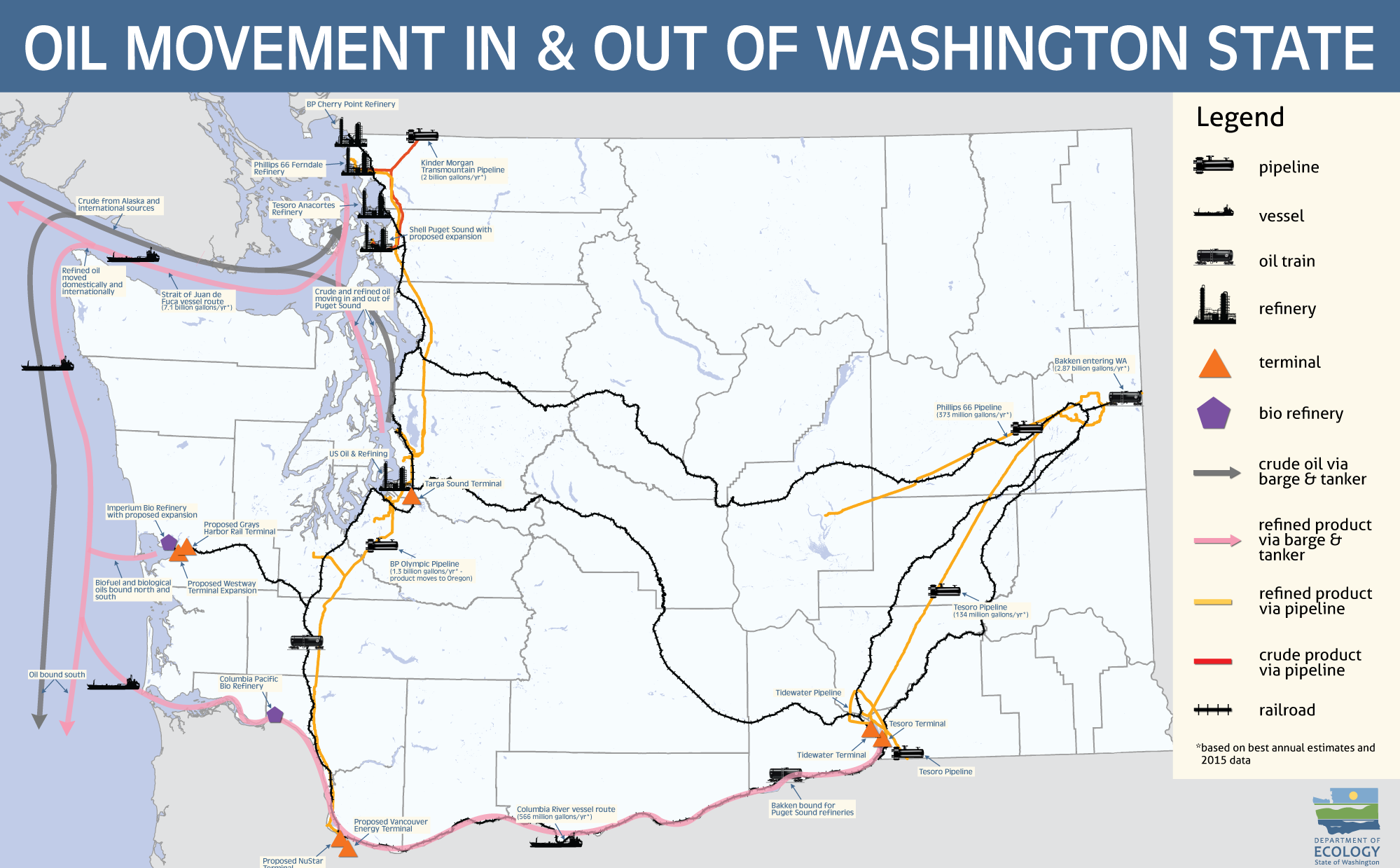 A map of how oil moves through Washington state, from the Department of Ecology.

Bob Cecile, a civil engineer and chair of the Cherry Point Aquatic Reserve Citizens Stewardship Committee who lives just south of the Cherry Point refineries, testified that “The Kinder Morgan pipeline project in British Columbia has the potential to very drastically increase the tanker traffic through the Salish Sea…That makes it all the more important that Washington state get ahead of the curve by adopting rules and regulations contained in this proposed bill.”

“My primary concern is we don’t have an updated statewide hazardous materials plan,” said Wayne Senter, executive director of the Washington Fire Chief’s Association. “We don’t have an updated plan and we haven’t implemented the plan.” And he cautions, “The more volume, more percentage chances that we’re going to have more things go wrong.”

The statewide hazardous materials plan for responding to spills on land was created twelve years ago to help coordinate responses to spills across the state, but it had problems, says Senter. When the plan was created, the assumption was that the state would fund the implementation. But it never did, Senter says.

The Washington States Petroleum Association’s Greg Hanon told the February hearing that Canada is requiring significant new maritime safety measures as part of the Kinder Morgan project, including five new response bases along the shipping route. “Rather than implement the bill to respond to a prospective concern about the Canadian pipeline deal, we should be working with Canada and with B.C. to find out how we integrate our existing program with that new [maritime safety] program,” he said.

Felleman authored a 2016 study for Friends of the Earth which concluded that the three most important steps to improving safety of vessel traffic in the Salish Sea were to require tug escorts in Puget Sound, create a coordinated transboundary Canadian-American spill response program and permanently position an emergency rescue towing vessel in the San Juan islands to prevent disabled ships and barges from grounding and potentially spilling. A 2016 Ecology Salish Sea Oil Risk Mitigation workshop came to the same conclusion.

“Once the oil hits the water, it’s not a measure of if, but when.”

But of the three recommendations, the tug escort requirement is the only one in HB 1611. Coordination with Canada requires federal action. But stationing an emergency response vessel in the San Juans is something Washington could do. Felleman argues it’s the number one thing that could help prevent a major spill in the San Juans. And residents of the islands agree.

“This bill is a good first step…we feel like it needs to go even further,” said Jamie Stephens, a San Juan county council member. “We think there needs to be more done.”

Getting an emergency response vessel is what potentially affected residents are most concerned about. Right now the nearest one is in Neah Bay, at the tip of the Olympic Peninsula. The state stationed it there in 1999, and it has been deployed 57 times. Ecology estimates its use has prevented more than 18.5 million gallons of spilled oil.

With the projected traffic increase of the Kinder Morgan pipeline, the likelihood of a 20,000 barrel or larger spill happening at the most difficult pass in the San Juans, Boundary Pass, would increase 800%, according to a vehicle traffic assessment done by researchers from George Washington University and Virginia Commonwealth University that was based on data from 2015.

“A major spill would have a significant impact on Washington State’s maritime economy, which is worth $30 billion and supports 148,000 jobs,” U.S. Senator Maria Cantwell, D-Wash., said in a 2014 press release.

“For us, once the oil hits the water, it’s not a measure of if, but when,” Stephens explained. “It will hit land within a few hours.”

That could be disastrous for a county whose economy depends on clean water and the pristine environment that brings tourism and creates high property values, residents say. But it’s not just oil vessels that San Juan county residents are concerned about.

Vancouver is the third largest port in North America, and projections based on new and expanding projects, mostly on the Canadian side of the border, estimate that traffic from other industries will be increasing dramatically over the next few years.

In 2015, San Juan county saw 11,580 vessels move through its waterways, but that number is expected to grow by 4,286 — a 37% increase in traffic, according to the vehicle traffic study. Most of those projects are for coal, natural gas, and oil transit.

“This is an exponential expansion,” says Stephanie Buffum, the executive director of Friends of the San Juans, a local nonprofit teamed up with Friends of the Earth to monitor the oil traffic.

San Juan county is home to the state’s southern resident killer whales, several tribes with fishing treaties, and a nature-based tourism economy. One oil spill could permanently change the county’s landscape, she says.

This story has been corrected. It misstated that the vessel bound for Tacoma was a tanker. It is a barge. The increase in vessel traffic as a result of the Kinder Morgan pipeline is projected to be seven-fold, not nine-fold.

This story has been updated to reflect the results of the vote on HB1611 in the House Finance Committee.