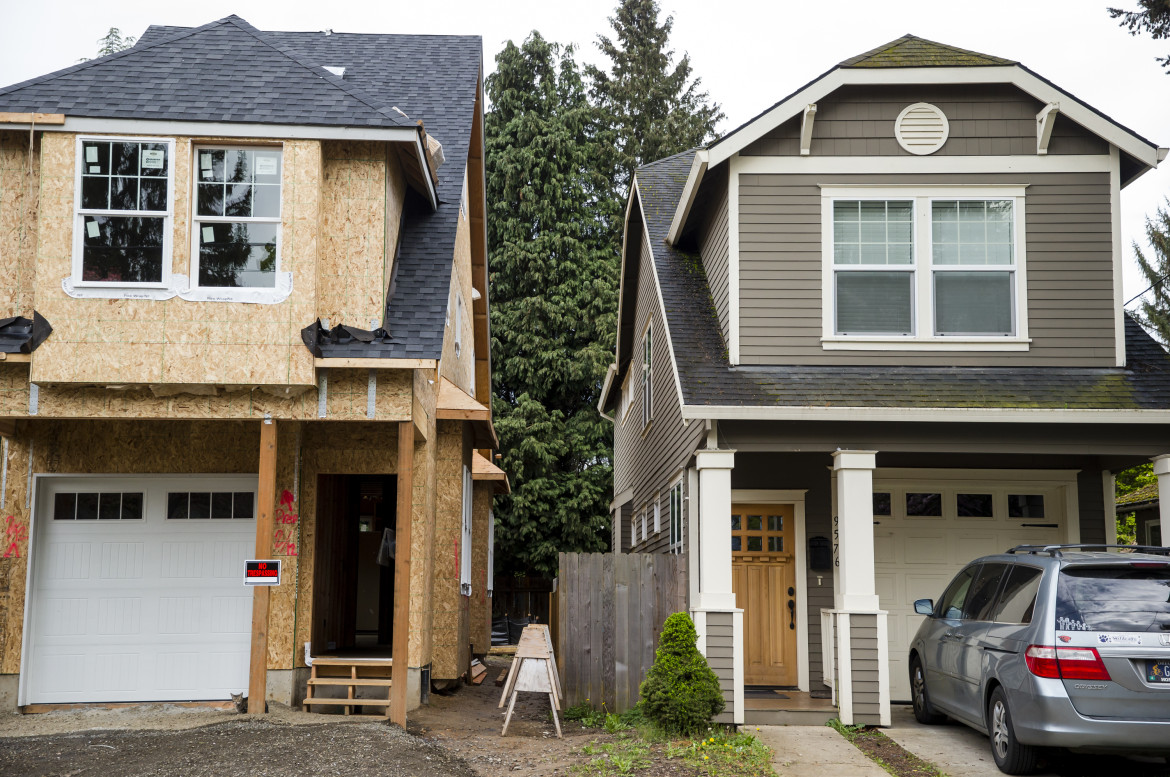 Reporting on the new reign of cash in the Portland housing market, as investors buy thousands of homes and homebuyers and renters alike face pressure from a new kind of speculation.

A bill sent to Oregon Gov. Kate Brown attempts to crack down on police racially profiling citizens. It drew controversy late in the legislative process when Democrats amended it to make possession of small amounts of heroin, cocaine and methamphetamine misdemeanors instead of felonies to encourage drug treatment.

It’s one of literally scores of schemes on the table to address rising homelessness, decreasing affordability, and continued displacement of low-income families and families of color from the city.

(InvestigateWest has reported this year on how cash changed the housing market, the release of the first State of Portland Housing Report, and what happens when your landlord is Wall Street. We also made a list of the key players on affordable housing in Portland.)

In a fit of accountability, we decided to benchmark the proposed affordable housing solutions for Portland that we know about today, so that we and others can look back in the coming months and years and evaluate our progress.

First, a primer on the housing emergency

Affordable housing means regulated housing. It’s typically set aside for people earning less than 80 percent of median family income, which is $51,730 for a single person or $73,900 for a family of four in the greater Portland area. Households in what is classified as affordable housing spend no more than 30 percent of their income on rent. By one count, Portland is 40,720 affordable housing units short of what it needs.

“This number has doubled over the last 15 years. We are losing ground,” said Jes Larson, executive director of the advocacy group Welcome Home Coalition, which did the survey.

A recent analysis from the Portland Housing Bureau, called State of Housing in Portland, identified some of the reasons why: The city has partnered well with nonprofits and successfully used of a handful of tools to develop affordable housing. But local leaders were slow to react to rising housing costs, and over the last several decades planned programs to develop affordable housing that were never quite deployed, including incentives for developers and bonds to build more affordable units in urban renewal areas. The lack of follow-through arises from the fact that Portland was — at market rates — affordable for most up until recently. No one imagined that a housing crisis would arrive, and so suddenly.

With the recession, builders stopped building while population growth continued (Portland gained more than 80,000 residents between 2000 and 2013, according to the State of Housing report). The tightened housing supply meant rising costs that hit the city hard.

“We were making great progress and everything stopped because of the economy. So many people — homeowners — were losing their houses. That was many years of unwinding our progress,” housing homeless residents, said Mary Carroll, Senior Policy Advisor to Multnomah County Chair Deborah Kafoury. She says that the effects of the recession are still being felt by those individuals and families who took years to exhaust their support network.

The triple-play of the recession, rising costs, and a housing shortage ruled out a lot of free-market options that used to be suitable for people with low incomes. That’s why experts like Larson and Carroll now say policy solutions are not enough to house low income earners in Portland. Instead, proposed solutions focus on a combination of regulatory measures and funding strategies to build more affordable units.

A big pot of state money

A push by Governor Kate Brown in the last legislative session led to $62.5 million in new dollars for affordable housing. Because the money comes from a general obligation bond repaid by the state, it comes without the typical restrictions of the federal money that dominates affordable housing. Of the pot, $40 million will be used to address the needs of families at risk for homelessness, with the remainder directed to preserve existing affordable housing ($2.5 million) and develop housing for people with mental health and addiction disorders ($20 million). “It’s really exciting. it’s a chance for us to rethink some of the rules and strings that come with affordable housing because it’s state money,” said Alison McIntosh, Government Relations and Communications Liaison for the department. Because the money won’t be available until the latter part of the biennium, these funds will hit the ground in 2017.

Oregon and Texas are the only two states that prohibit the use of inclusionary zoning — a zoning tool that provides incentives to builders and developers to add affordable units as a percentage of new development. Proponents of inclusionary zoning not only say it could be used to foster diversity in owner-occupied housing, but that it could potentially be expanded to rentals, creating more low-cost rent options. This year’s legislative push to roll back that ban came closer than ever, advocates say, seeking to repeal the ban and ensure affordable housing accounted for up to 30 percent of a development’s units. The repeal would not have mandated the housing, instead allowing communities to choose whether or not to adopt the plan. But in the end it failed. Some advocates now predict this debate will return to the next legislative session.

Saltzman’s office is also proposing a study of the relationship between commercial and residential development and the need for affordable housing. Should the city move forward with the study, it will pave the way for the city to charge “linkage fees” to developers, or fees intended to address their impact on housing affordability. Funds generated through such a fee would be set aside to address affordable housing needs.

Mayor Charlie Hales is floating a $25,000 flat tax on demolition of single family homes, with an additional $25 for every year the house stood. The tax would not apply to derelict homes or structures being demolished due to catastrophic loss. When paid, it would generate revenue for the Portland Housing Bureau’s housing investment fund, supporting home ownership and repair programs. And while housing advocates worry developers will simply eat that cost, Hale’s staff says that research shows the sweet spot to discouraging a teardown is $25,000. The tax aims to halt the steady demolition of Portland’s older housing stock — 181 single family homes were demolished in the last year, according to Hale’s office. “That causes affordability in certain neighborhoods to change because developers could potentially tear down, as the mayor characterizes it, a perfectly good $200,000 single family home, and build a giant home in its place that changes everybody’s property values and it also changes the housing stock,” making modest homes less available, said Sara Hottman, spokeswoman for Hales.

Local jurisdictions can follow the lead of the Oregon Opportunity Network (Oregon ON) in finding smaller-scale solutions. Through its work managing the community outreach aspect of Metro’s equitable housing initiative, Oregon ON has assembled a robust toolkit to help communities outside of Portland to adopt strategies to foster community affordability.

Go to the voters

A November 2016 ballot initiative is likely as affordable housing advocates look to increase they supply of affordable housing. This plan could take many forms. John Miller, executive director of Oregon ON, says that a bond measure for property owners is the most likely.

On April 29, the city commission approved a plan to fast-track a review of new infill size and setback standards. Hales said the review will limit opportunities for development of “McMansions” within existing neighborhoods, a restraint that could keep prices from escalating while higher-priced new development continues to replace older, more affordable homes.

Power to the (neighborhood) people

Realtor Alyssa Isenstein Krueger is working with a team of concerned real estate brokers that may propose the city offer more powers to neighborhood associations to consult on design reviews on demolition sites, and that citizens be empowered to record deed restrictions to prevent future demolition on their properties. The group may also suggest demolition permits on homes transferred within the previous 12 months require consent from the sellers, and that the city pass regulations to protect elderly homeowners from being paid below-market prices for their properties.

Land trust Proud Ground would like to canvass government agencies, including school districts, TriMet and the Portland Water Bureau, and other nonprofits for possible available land. Proud Ground Executive Director Diane Linn said only 60 percent of the jobs created last year in Oregon earned 60 percent of median income or more. The median income for Oregon was $50,229. Linn stresses that affordable housing can stabilize these populations that might otherwise become displaced or homeless.

Land use volunteers in the Concordia neighborhood have suggested the city allow more unrelated adults to live together, allow up to five dwelling units within single-family structures in residential zones in transit service areas, and relax standards on accessory dwelling units to foster development of affordable rental units.

Mayor Charlie Hales declared a housing state of emergency in Portland Sept. 23, which enables the city to wave zoning requirements for homeless shelters, among other things. Right now, city zoning is such that only Gateway and Old Town are zoned for such temporary housing. “We have heard from a lot of churches that want to open shelter beds in their basement but it takes six months and it costs $30,000,” said Sara Hottman, a spokesperson for Hales. The declaration enables the city to wave zoning codes to allow for more shelter development throughout Portland, and to use city owned property to develop more shelters. The goal is to bring all of Portland’s homeless veterans and homeless women indoors by the end of 2015.

The effort to house homeless veterans and women springs from a federal initiative that prioritizes veterans, women, and the chronically homeless. A Home For Everyone has already set the goal to get the area’s veterans indoors by the end of the year – 690 – and aims to scale its successes with veterans to other populations. Part of the project includes establishing a tracking system to monitor individuals and their housing access, and look closely at what solutions have worked. The goal after 2015 is that when a veteran becomes homeless, there will be a system in place to make that homelessness brief, rare, and a one-time occurrence.

Incentives for landlords to house the homeless

MultiFamily Northwest, an association of property owners, recently distributed a letter signed by Hales and Kafoury to call on more than 600 property owners of large, multifamily housing complexes to set aside more units for affordable housing. In exchange, those property owners receive rent vouchers; a funded risk-mitigation pool to cover any damages; and a promise of support services that help make veterans better tenants. There is now a landlord response team available after hours and on weekends to pitch in in emergencies. The search continues for large mutifamily properties that are willing to participate.

Multnomah County has committed $5 million to develop housing. This is unprecedented, but came in response to recommendations from A Home For Everyone. “It’s just a fraction of what’s needed,” said Mary Carroll, Senior Policy Advisor to Multnomah County Chair Deborah Kafoury.

Portland’s Bureau of Planning and Sustainability is revamping the city’s single-dwelling development standards, aiming to ensure that infill and home remodels blend into existing nieghborhoods. The reboot will probe housing size, narrow lot development, and alternative housing. Michael Andersen at BikePortland has been doing some great reporting highlighting the ways in which a revamp of these rules might increase housing affordability. For example, the city doesn’t often allow existing homes to be divided into apartments, a type of mid-density development that can boost affordabilty, curb demolitions, and increase available housing stock. City planners are currently researching the code, and plan a series of public hearings between January and April. New rules are expected to take effect late next year.

2 thoughts on “A benchmark of housing affordability solutions for Portland”