A state report is critical of the methods used to evaluate the air quality at John Marshall School in Seattle – a 100-year-old building that was renovated before hundreds of elementary school students moved in last fall.

At issue is whether children could suffer harm from the pollution by generated by cars and trucks traveling on close-by roads and highways. In John Marshall’s case, one corner of its lot in Seattle’s Ravenna neighborhood sits under Interstate 5.

After the school building was featured in several 2013 stories by KING 5 and the environmental journalism watchdog InvestigateWest, Seattle Public Schools paid Veritox $35,000 to study whether traffic pollution could harm students and staff.

In three days of testing in 2014 Veritox found that “…airborne particulate levels outside the John Marshall School and in the playground should remain well within PSCAA air pollution limits when it opens in September 2014.” PSCAA is the Puget Sound Clean Air Agency.

The Washington State Department of Health (DOH) reviewed the consultant’s report at the request of Seattle Schools and was unconvinced, finding that Veritox’s “…monitoring at the John Marshall School may not have been adequate to characterize pollution during peak traffic times.”

DOH further critiqued the study, saying Veritox’s decision to test for just three days might not be long enough, and that Veritox’s testing of only one type of particulate matter (PM2.5) generated by the nearby interstate traffic was not broad enough and “…is not supported by current research.”

“Where does that leave us as parents? If there is a concern we’re not going to be able to just take our kids up out of school,” said Zarita Hester, whose three children attend elementary school at John Marshall.

Even with the DOH report, the school district insists that children are not threatened by traffic pollution.

“Not one complaint has been received by the district,” said spokesperson Tom Redman. 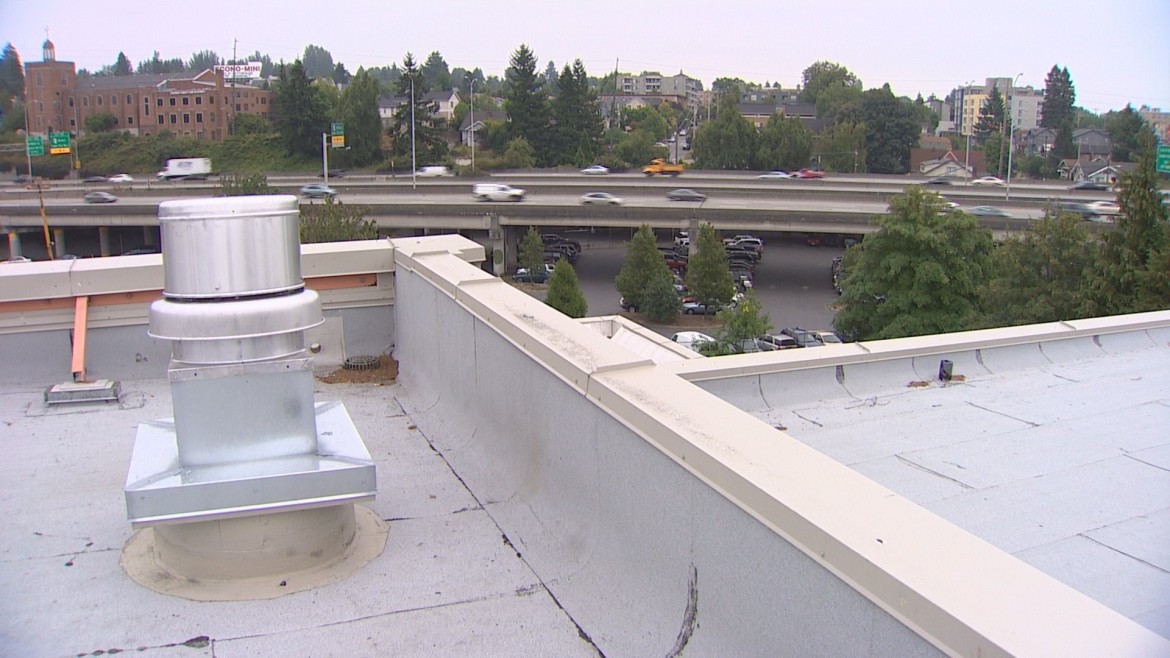 The dangers of vehicle emissions have been known for years: researchers in Europe first made the connection between children’s poor lung function and school-day exposure to traffic in 1993. Ten years later a California Environmental Protection Agency study made a similar leap, finding that kids in San Francisco’s East Bay attending near-road schools were 5 to 8 percent more likely to suffer from bronchitis and asthma.

Children spend about a third of their day at school, often during the hours of heaviest traffic. Many schools sit alongside big, busy roads because that’s where land is cheap and bus access is more convenient.

Within 500 feet of major roads, traffic pollution — a plume of suspended soot and gases — often carries pollutants at levels considered harmful by air-pollution researchers. A 2008 study found that more than 10 percent of surveyed U.S. schools were located within about 300 feet of highways, the distance within which road pollution is most potent.

A 2013 InvestigateWest analysis found nearly 30 public Washington K-12 schools sit within 500 feet of a major road. Eight of the 30 schools beside highways were built within the past 10 years — after the dangers were well established by scientific research.
An additional 166 schools are located within 500 feet of the state’s heaviest truck routes. The diesel fuel that powers these trucks can produce 100 to 200 times more soot than gasoline engines, and the exhaust is so toxic that the World Health Organization classifies it as a carcinogen. (See a map of those schools.)

Washington’s DOH says it does not advise parents to move their kids out of John Marshall or other schools near major highways, and it says that most parents shouldn’t need to take any action.

“Certainly, if a child has an underlying health condition that makes them more susceptible, then we strongly encourage the parents to consult with their family physician,” said DOH epidemiologist Glen Patrick.

Patrick said the conflicting studies result in a frustrating “uncertainty” for parents. But he says the DOH understands that eliminating the traffic health hazards that threaten children at school would require an enormous and costly public policy shift.

Veritox and the Seattle Schools, for their part, insist the DOH review of the John Marshall study was inadequate.

“No actual or anticipated exposure levels (or limits) at the John Marshall School are included in the WA DOH report. The exclusion of specific exposure levels coupled with the manner in which the report is written may result in unwarranted assumption by parents that air quality must be poor at the school…”, said Veritox’s written response.

Redman said the district remains convinced the air is safe. After KING 5’s stories in 2013, the district upgraded John Marshall’s air filtration system to a MERV 9. Redman said that’s the same level as a hospital laboratory.

However, at least one other school along I-5 received an even higher level HVAC system when it was renovated. Redman said the TOPS school in Eastlake got the state-of-the-art air filtration system because its air handling system needed to be replaced. Marshall’s, he said, did not.

Redman also says the district started sending out air quality reports to principals so they could decide whether to keep children inside on higher pollution days. And he says the prevailing winds at John Marshall typically carry road pollution away from the school.