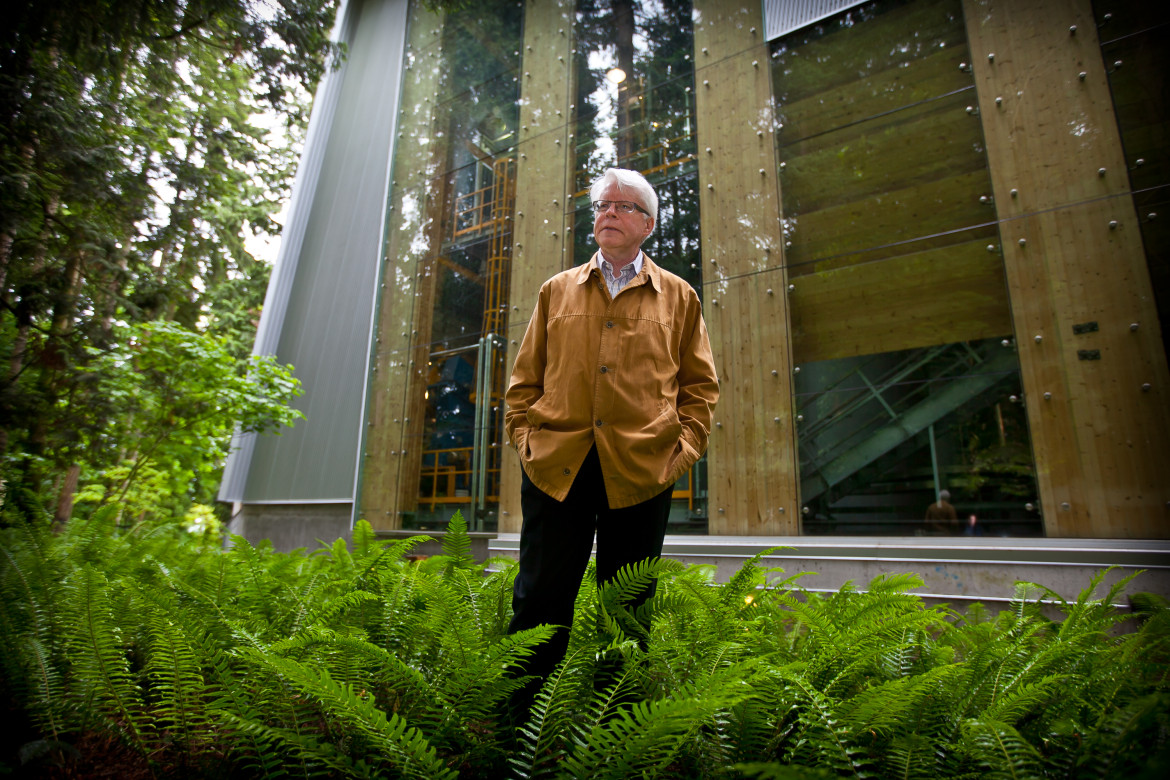 As director of strategic partnerships for the University of British Columbia, Brent Sauder had a major role in shaping plans for the new $34 million biomass power plant on campus, known as the Bioenergy Research and Development Facility. The industrial facility sits just across the street from bluffs overlooking Georgia Strait — some of the most expensive real estate in Canada, in other words.

In an on-campus interview last year with InvestigateWest’s Robert McClure for our “Smoke and Numbers” series with The Tyee, Sauder explained UBC’s motivations and rationale for bringing the facility to campus in a partnership with General Electric and Vancouver-based Nexterra. Their conversation has been edited and condensed.

Brent Sauder:                  One of the problems with BC is that we have very cheap power. The development of these kinds of technologies would tend to take place in places where there’s higher power prices. But obviously we want to have good companies grow in British Columbia so this was an opportunity for us to actually get them to develop their product here.

When they first came to us saying would we be interested in being a demonstration site, in typical Canadian fashion the only thing we have is land so that’s what we actually put toward the project. We have a site.

UBC is about 50,000 students. It’s one of the largest land grant universities in North America and we have our own governance system. We’re not the city of Vancouver. So part of the whole thing of this project was to get the social license to actually build a facility like this.

Robert McClure: Because it’s an industrial facility in the middle of campus?

BS                  You know, how can we tell the rest of the community that they should be looking at this kind of technology if UBC is not willing to do that? So I say ‘YIMBY’ — yes in my backyard — and that was part of the project. In the early stages we spent a lot of time getting the social license and social consensus to build it here. Big concerns about truck traffic, emissions, quality of life, and we’ve basically been able to mitigate all those things.

One of the big problems we have in BC is that our electricity is already green, right? It’s about 95 percent green, it’s hydro. The way to actually get to zero would be to have it all hydro. The problem is we are restricted on how much hydro we can actually bring out here.

The other thing that UBC has done, and this has again stimulated the market, is we’ve already raised our intention with the B.C. utilities commission that we would like to purchase a million gigajoules of renewable natural gas by 2018.

BS                  It’s from landfills, it’s not fossil fuel. Landfills, stuff from organic waste from digesters on dairy farms, all those kinds of things. In some ways what UBC does is we put out a performance requirement, basically a market that we’re willing to pay money for, then it’s up to the companies to work with us to develop solutions. When we go to companies, I say you know we would like X but we’re not interested in buying what’s in your catalog right now. We want to work with you to develop what’s in your catalog five to 10 years from now.

I joined UBC in 2001 and at that time I don’t think the researchers and the operations guys ever talked but now there’s ongoing dialogue.

BS                  That’s right, and they don’t have to worry about finding grad students to run the project because it’s part of the operational need. It’s not a research activity, it’s a mission. So a good example: Kennedy did not say we’re doing research on putting a man on the moon because if he had we’d still be doing the research. He said we’re going to put a man on the moon and it takes research to do that. But that’s not the end play. The end play of this is to generate steam and to make power.

BS                  Actually where it really helps is that we’re very well-known for sustainability. That’s a real catch for us and branding for us. Students are very enthusiastic about that and they want to participate in that. We’re also very strong in applied research like applied science or engineering-type stuff. The clean energy research center is here and they’re doing things like fuel cells. I don’t know if you’re aware of this, but Mercedes-Benz now manufactures all their fuel stacks for all their fuel-cell cars here in Burnaby. So they’re actually made here, shipped to Stuttgart, made into engines and shipped back as cars.

BS                  I mean, the end game for us on this is to build very successful companies and then have those companies — we feel that there’s more to be gained for the University from that than just selling them a piece of technology. So what I’d like is to get to the point where Nexterra, General Electric, Cisco, Alpha Technologies, all these companies are so close to UBC that they decide this is where they want to put a research center.

RM                  So the reason to do this and all the things that you doing is that you’re trying to build this concentration of sustainability and related private infrastructure?

BS                  Private infrastructure, and it’s a great learning tool. You get students working on projects and researchers working on projects that are relevant and have good take-up by the industry. You can get impact with that research. Universities, you know, when they come up with an idea, it takes a long time to finally get into the market. If you have a eureka moment and say ‘Oh!’ and then start your product it’s going to be 10 to 15 years before you actually do something. If you’re working with a company that already has the marketing and channels and all that kind of stuff you can move really, really quickly.

Just think what happens if you can get something with the marketing clout of Cisco behind you, how quickly that can change the world.

Most of these companies also are related to some sort of venture capital fund. Most of these big companies no longer have big corporate R&D centers. They usually do their innovation by acquisition. The idea is to look at the small, smart companies. If there’s a professor that’s been working with these guys, they’re watching them. That’s how they do it

BS                  I can’t say we do. One of the things we did to get the social license is we actually created a community charter, an operating charter, and in that operating charter we have a committee made up of citizens around here that actually get together to talk about problems. You know, there was some discussion about noise but the problem is this campus is noisy, just standing here.

BS                  How much noise gets blamed on the plant, that’s another thing. I got phoned by a lady who had an office right over there and she said, ‘I sent my team home because the odors are terrible and the vibration is terrible.’ I said that’s interesting because the plant’s not running. You know what it was? They were paving this and so it was the tar and it was the compactor that was shaking the building.

The biggest thing is how do you actually get change to be acceptable. People don’t like change. As I say, we prove we can walk the talk. Our air emissions are actually measured to a higher standard than what’s required by Metro Van (Metro Vancouver, a regional government).  We actually rate this plant against Massachusetts and the San Joaquin Valley, which are the two toughest jurisdictions in the world. The emissions are as good or better than natural gas, which is an interesting thing because most Joe Public think natural gas is extremely clean.

BS                  The unique thing about this plant is not its bigness, it’s its smallness. The only way we think that you can actually generate at that 2-megawatt to 4-megawatt sweet spot is through an internal combustion engine. That’s the research and demonstration part and that’s where the guys are working with Nexterra people. We’ve got a PhD guy working just on qualifying the fuel.  Because right now it’s the Wild West on biomass.

BS                  If you ask a company to bring you biomass, they’ll bring you anything. The trick for us is we want to be able to identify the UBC blend, and the UBC blend is like your coffee mixture. It’s the one that gives you the best performance for the least cost: tastes best and you can afford it, right? So the idea here is what does that look like? What’s the species mix? What’s the moisture content? Trace chemicals? What’s in there that we don’t want or we do want?

When you go fill your car up and you get the super blend, you expect a certain performance from that octane level. There’s no such gradation for biomass right now. Nobody has set the standards on this — it’s the Wild West.

BS                  Well, if you do anything, it’s where that carbon came from. The carbon that is coming from biomass would go into a landfill or somewhere else, and it’s coming from a renewable source so the idea is unless you want to wait another million or whatever years to get a fossil fuel out you can actually get this replenished within sixty years.

BS                  We are using some urban wood waste. We’re also using some fall down from sawmills and things like that. So it’s off product. You can smell cedar because we can’t afford to compete with the pulp mill industry. These are off pulp grade and pulp does not use cedar.

RM                  So the big picture is you guys have made this commitment irrespective of whatever the country or province may be doing?

Nexterra and General Electric came to us with their product that they wanted to develop five to 10 years from now. We just wanted heat. That’s all we wanted.

BS                  We’re a risk-accepting customer. We’re not foolish but we will accept some of the risk and depending on how much risk there is obviously that’s how much third-party funding we go get. That’s part of my job, to put the program together such that we get funding from the provincial government, from the federal government and private sector.

RM                  I read about the plans to put in biomass heating for the Olympic Village in downtown Vancouver, which apparently got shouted down.

BS                  It is about the social license. I mean I remember there were some discussions down in the False Creek area, there used to be a lot of sawmills down there. People talking about all we’re doing is bringing haystack burners back to False Creek, and that’s not what this is.

You know we had to be very, very careful about how we chose our vocabulary. We never talked about incineration because we don’t incinerate. I don’t know what it’s like in Seattle, but you don’t want to talk incineration in Vancouver. They get apoplectic. It took a little bit of education.