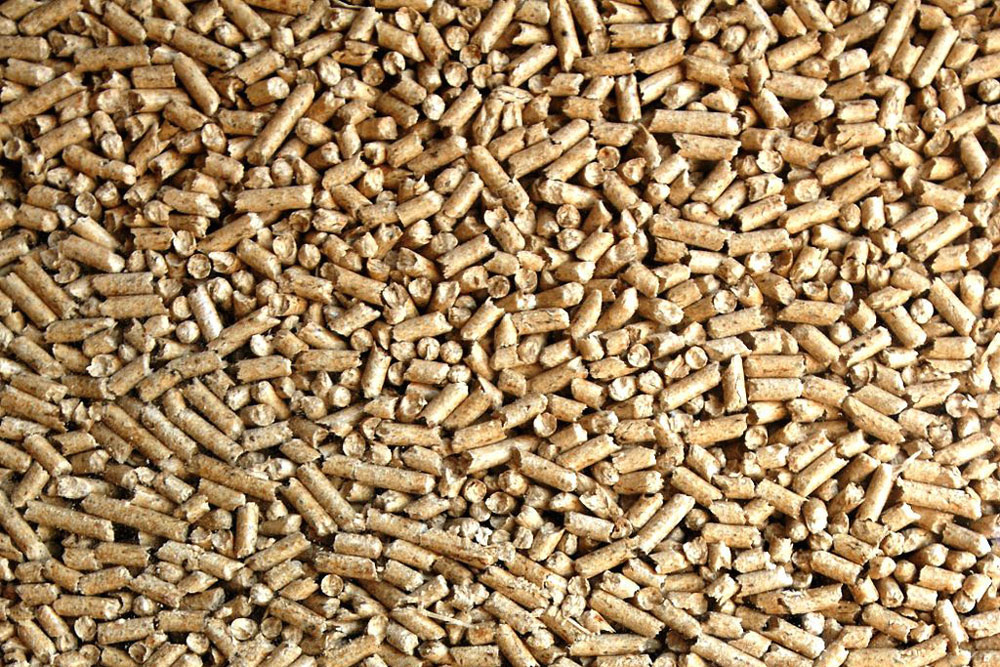 Eight words in a 927-page document. That’s all it took to launch a European policy with big implications for B.C. That policy counts burning wood to produce energy as equivalent, climate-wise, to solar and wind power. This despite the fact that burning wood releases the very same greenhouse gasses as any fossil fuel; the same gasses that are turning oceans acidic and melting the polar ice caps. Here are the eight words: “The emission factor for biomass shall be zero.”

Not, you will note, “are zero.” No: “shall be zero.” Behind that starkly declarative pronouncement lay months of tense international negotiations over the climate-change implications of burning biomass, or any kind of plant matter: wood, agricultural wastes, or crops grown for burning. In the end, the winning argument was that biomass regrows, recapturing the carbon released when it was burned, and therefore must be OK for the climate.

Editor’s Note
As the world searches for alternatives to climate-altering fossil fuels, the prospect of “grow-your-own” clean energy from plants — so-called biomass fuel — is tantalizing.But this joint Tyee/InvestigateWest investigation reveals that once you clear away the smoke, there are real problems with the carbon-neutral claims being made for this “green” energy.Read more about the project here.

As the second report in this series found, however, that argument was based on politics, not science. In fact, there are multiple factors at work in determining whether wood and other biomass lives up to its green billing. Nonetheless, the brief sentence has ignited a whole new industry in B.C. in the last decade, shipping boatloads of pelletized wood waste to Europe. There, Canada’s woody biomass is a sought-after commodity to be burned in power plants that put juice on the continental grid.

The export of B.C. pellets generates sales of more than $200 million a year. The fuel’s “zero-carbon” status, while fictitious as a matter of physics, helps the province’s Euro-customers get closer to their Kyoto commitments for greenhouse gas emission reductions. What’s not to love?

The trouble with this romance lies in the fact that while plants do regrow, capturing carbon back out of the air as they do, it takes decades for today’s emissions to be safely sequestered in the future’s trees. Meanwhile, the carbon released from burning biomass has the same climate-change impact as carbon from oil, coal or natural gas. Except that more wood has to be burned to meet a given energy demand than a fossil fuel. On a CO2 per kilowatt basis, wood fuel actually releases nearly half again as much carbon pollution than coal.

Which poses the question: is British Columbia a Saudi Arabia of clean bio-fuel? Or a participant in a global carbon-kiting scheme, claiming climate credit today for carbon that won’t be locked safely away for decades?

The pellets the Europeans are burning are thumb-sized extruded chunks of ground-up wood pressed together into fuel — a miniature wood-based equivalent of the familiar backyard barbeque briquet. Global production of these pellets increased tenfold between 2000 and 2012. At the same time, while other Canadian forest-product exports have been falling, the country has become one of the world’s largest suppliers of fuel pellets.

And even though the sea voyage from British Columbia to Europe is three times as long as from eastern Canada, the province contributes four-fifths of Canada’s pellet exports. According to the B.C. Ministry of Forests, roughly seven per cent of the biomass removed from B.C. forests ends up as fuel, with about 1.7 million tonnes of that turned into pellets for export annually. In 2012, about 60 per cent of B.C.’s pellet exports, some 795,000 tonnes, went to the United Kingdom, followed by about 250,000 tonnes to the Netherlands and 100,000 to Japan.

Critics point out however that the greenhouse gases actually going up Europe’s smokestacks haven’t declined at all as a result of switching from coal to wood fuel. They may even have increased, since it takes more wood than coal to generate the same amount of power.

“Those [EU biomass] policies opened the door for an environmental disaster,” warns Nicholas Mainville, a Greenpeace campaigner and lead author of a report critical of Canada’s foray into biomass energy. “The biomass industry and the boom for pellets actually increases the bad practices.”

The industry responds that it’s only transforming what used to be a waste product into something useful. Much of B.C.’s pellet production comes from wood mill wastes, industry notes. For years, the same stuff was incinerated in “beehive burners” that caused serious local air pollution in addition to releasing greenhouse gases. Other piles of it were buried in landfills, which is worse: there wood decomposes into methane, a greenhouse gas 21 times more potent than carbon dioxide over a century’s time. (Nowadays, though, most landfills capture this gas or at least neutralize it before releasing it.)

Unless these mill wastes are made into pellets, “you obviously can’t do anything with it other than burn it or bury it,” said Gordon Murray, executive director of the Revelstoke-based Wood Pellet Association of Canada.

A major point of contention between critics and industry is the extent to which any of those pellets come from whole trees cut just for fuel. Burning sawdust from lumber mills that would otherwise decompose and release gases that harm the climate anyway is one thing. But studies strongly suggest that generating power by burning whole trees that would otherwise, even dead, lock up carbon for decades to come in a forest, releases more carbon, sooner, than if they were left standing.

Industry strategist and public-relations consultant Cam McAlpine counters that, “Nobody’s going out and cutting saw logs for this. We’re not going out and actually cutting anything down.”

That may be so now. But many environmentalists fear that if Europe persists in its zero-emission biomass fiction, the pressure to harvest whole trees for fuel will become irresistible. By their reckoning, Europe will soon need five times as much wood-based energy than now to “balance” its Kyoto carbon books. The U.K.’s largest plant burns up to seven million tonnes of woody fuel annually, more than four times Canada’s total current exports. The European Biomass Association projects the EU will consume 50 million to 80 million tonnes per year by 2020, up to a 10-fold increase over 2008.

“The scale here is huge,” said Debbie Hammel of the Natural Resources Defense Council, another international environmental group that opposes woody biofuel. “We’re talking about a huge increase in the amount of pellets that would need to go to the EU for these very large utilities to have enough to meet their renewable energy needs.” And, she adds, “in reality, [they] are not reducing their carbon.”

Europe is sending mixed signals about its biomass-fueled future plans. Britain’s RWE power last summer abruptly cancelled what had been billed as the world’s biggest coal-to-biomass conversion, with a promised 70 per cent decrease in greenhouse gas emissions. The company cited difficulty in finding investors in the project, and in meeting air-pollution limits.

Also last year, the European Parliament revisited the question of biomass fuels nominal carbon-neutrality. While it didn’t reach a decision, a leaked document suggested it was preparing to, “put in place less strict sustainability criteria for biomass…. The criteria would not account for…the loss of forests as ‘carbon sinks’ which remove carbon from the air.”

Back in Vancouver, at least one company is looking the other way for additional biomass sales. RCI Capital, its CEO John Park told The Tyee recently, signed a Memorandum of Understanding last November with a Chinese Biomass Energy Association for the investment of up to a billion dollars in B.C. pellet production for shipment to China’s power utilities.

Others are asking, if Europe can get close to half its electricity from wood, why isn’t more B.C. waste wood used here, instead of being transported around the globe?

In fact, B.C. already boasts North America’s largest wood-fueled power plant: a privately owned facility has been generating 66 MW of electricity — enough to supply about 52,800 homes — for the last 16 years in Williams Lake.

But one who would like to see more home-grown biomass generation is UBC professor Michael Brauer. An expert in the effect of air pollutants on human health, he worked in Denmark and the Netherlands before coming to B.C. Now he doesn’t see the sense of sending Canadian wood waste there.

“Many of the European countries and Scandinavia say they’re going renewable, so they need a renewable energy supply and can’t do it themselves. So they import pellets from Canada or the U.S.,” Brauer said. “Why don’t we use them here? It’s perverse that we’re sending them over on diesel-powered ships for Sweden to call itself green.”

Even more perverse is this: as things stand, British Columbians can’t be sure whether the energy they, or Europeans, are getting from B.C. biomass is really ‘green’ at all. If British Columbians want to be certain their biomass bonanza is climate friendly, the province needs to review its policies.

Researcher and frequent Tyee contributor Ben Parfitt, in a 2010 study for the David Suzuki Foundation, urged that the province act to minimize the amount of wood diverted to biofuel as “unsuitable” for lumber, and suggested that plantations dedicated to trees grown for fuel be considered.

At a minimum, the province needs to ensure that when any trees are burned as “zero-carbon” fuel, replacement seedlings immediately start recapturing carbon from the atmosphere. And, that the “credit” for that capture isn’t “cashed” before it actually occurs.

Until then, British Columbia is a central player in what amounts to an international carbon-kiting scheme, claiming credit for carbon capture decades before it’s occurred, while hawking a product that actually spews more greenhouse gases than the fuels it replaces.

Read the first article in this series: “Are Climate Claims for Burning Renewable Trees a Smokescreen?”

Olivia Henry contributed to this report, which was supported by the Fund of Investigative Journalism and a Tyee Fellowship for Investigative Reporting. The Tyee award is funded by Tyee readers to pursue a major journalism project in the public interest for British Columbians.