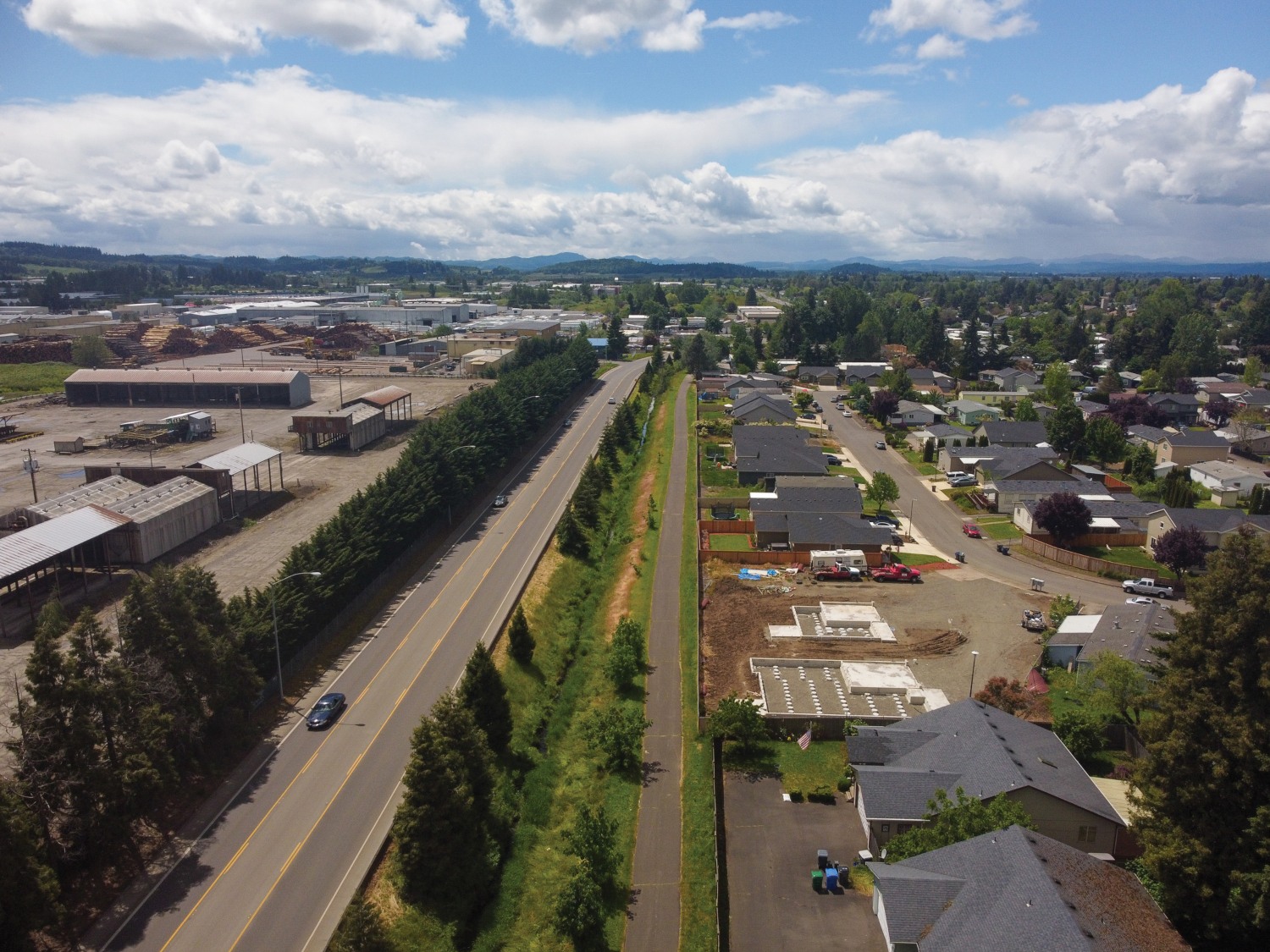 A chronic polluter closes its doors. What’s next?

Home » Environment » A chronic polluter closes its doors. What’s next?

The owner of a wood treatment plant is trying to walk away from its mess in West Eugene, Oregon. Neighbors say, not so fast.

It was 10:47 p.m. when Arjorie Arberry-Baribeault got the phone call that changed her life. A doctor diagnosed her daughter, Zion, then 13, with Hodgkin’s lymphoma. Two years later, the son of her best friend and neighbor was diagnosed with the same cancer. Once childhood pals, their kids were now teenagers with matching lumps on their necks. “Wait a damn minute,” Arberry-Baribeault thought. “They’ve played in the same water, the same parks. … What made our kids sick?” The teens’ cancers joined a long list of ailments affecting residents of West Eugene, Oregon. And they thought they knew the culprit: a nearby wood treatment facility.

Step outside the door of a home near the J.H. Baxter plant, and until recently, you might feel smothered by a bag of mothballs or inhale the stench of putrid burnt oil. The source? A cocktail of chemicals used to preserve wood products like railroad ties and light poles. After decades of neighbors complaining about nausea, headaches, burning eyes, rashes and more, the plant abruptly stopped production on Jan. 31. The company blamed rising operating costs, market volatility and diminished margins.

The acrid smell is gone, but the pollution from chemicals billowing into the air and dripping into the water remains. Pentachlorophenol, or PCP, a highly toxic industrial wood preservative, leaked into groundwater. Dioxins, a group of toxic chemical compounds created during pentachlorophenol production that can cause cancer, thyroid and reproductive problems, contaminated local yards.

The neighborhood and the facility need cleanup. But who is going to pay? Community members and local nonprofit Beyond Toxics want J.H. Baxter to foot the bill; the company claims it can’t afford to. The ensuing fight shows how hard it is to hold polluters accountable. But the situation could change; the city of Eugene is considering how to keep something similar from ever happening again.

A TWO-LANE ROAD, a grassy ditch and a trickle of water are all that separate homes from the J.H. Baxter plant, which opened in 1943. The city of Eugene annexed the surrounding area 11 years later, zoning it as low-density residential. Today, West Eugene is home to 32 of the 33 manufacturers that handle hazardous substances in Eugene. Just over half of the residents within a 1-mile radius of the plant are considered low-income, a higher proportion than Eugene overall.

Residents say they didn’t know that J.H. Baxter was spewing pollutants when they moved in, and they wonder why the city allowed homes to be built so close to it. “You stuck us in a corner in West Eugene and said, ‘Well, that’s the industrial area,’” Arberry-Baribeault, who lived there for 25 years, said. Some residents described a resulting pervasive fatalism: They’d call in air-quality complaints to the Lane Regional Air Protection Agency, nothing would change, and, for a long time, they gave up. “If this happened in the wealthy part of town, it would’ve changed in 1985 instead of now,” said Mira Mason-Reader, who described a neighborhood full of young professionals, older residents and tree-planting efforts. “We have a really awesome community that deserves the same quality of life, regardless of how much money we make.”

Decades of monitoring by the Oregon Department of Environmental Quality (DEQ), Oregon Health Authority and the Lane Regional Air Protection Agency detail polluted land, water and air. The agencies, Oregon State University and the city of Eugene created a rap sheet that lists multiple offenses starting in the mid-1980s and continuing through 2021: violated waste-discharge limits, disobeyed air permit terms and improperly handled hazardous waste. The DEQ designated J.H. Baxter a “significant noncomplier” — meaning the company repeatedly exposed people and the environment to hazardous waste — in 2011. In 2021, the agency found that residential yards just north of the facility contain two to 24 times more dioxin than the acceptable limit. (Georgia Baxter, the company’s owner, did not return repeated requests for comment.)

While state health officials note that their health-assessment analyses can’t determine what caused cancers in West Eugene, residents like Arberry-Baribeault believe there’s a connection between the dogs, kids and adults who have gotten sick and the toxic chemicals surrounding them. The Oregon Health Authority reports slightly elevated rates of lung cancer and Hodgkin’s lymphoma there compared to the state and county overall, and children’s asthma rates are almost twice as high in West Eugene’s school district as in the Eugene school district. But the agency also concluded that the cancer risk from naphthalene, a hazardous air pollutant and a source of the pungent odor in the neighborhood, was too low for concern. Residents aren’t convinced their health isn’t at risk.

Arberry-Baribeault got involved in Beyond Toxics after her friend’s son’s cancer diagnosis. Now, she’s the environmental watchdog’s community organizer for West Eugene, also called Bethel, helping residents understand what’s going on in their backyards and explaining how to contact city leaders and join community information and advocacy meetings. Beyond Toxics, along with fellow community organization Active Bethel Community, also helped form what’s called the “core team,” a group of county and state regulators and community members who meet frequently to share information and ask questions. “My part has always been to make sure (regulators) don’t look at us as data,” said Lin Woodrich, another neighborhood leader. “What they come up with is what we have to live with.”

IN 2021, THE DEQ SLAPPED J.H. Baxter with over $220,000 in fines, primarily for illegally pressurizing 1.7 million gallons of hazardous waste and boiling it off into the air — by far the largest penalty the state has issued against it. Some activists saw it as a slap on the wrist, while others saw it as a sign that the plant was finally facing real consequences.

Overall, however, accountability has been slow and the company has succeeded in having some of its penalties reduced. It’s part of a state-run air toxics program intended to lower health risks and bring high-priority offenders into compliance, but has yet to complete an emissions inventory, a crucial first step.

J.H. Baxter has also notified regulators that it can’t afford to clean up the plant site — an estimated $3 million cost — or the toxic neighborhood soil. Sampling a single yard can cost several thousand dollars; soil removal could cost tens of thousands of dollars more for each property. Still, the DEQ is trying to get the company to pay for some of the cleanup along with its outstanding penalties. DEQ spokesman Dylan Darling said the agency “will recover cleanup costs to the full extent feasible” and is trying to get a clearer picture of the company’s financial situation. The department recently placed a lien, a claim against a property that can be used as collateral, on the facility.

The first cleanup action, removal of toxic soil from a few yards in the neighborhood, will happen this summer — using DEQ funds, so it can begin sooner. The lengthy process, with no guarantees, agonizes community members. “We claim we’re making polluters pay,” said Lisa Arkin, Beyond Toxics’ executive director. “But in reality, we don’t have a way to hold their feet to the fire.”

THAT COULD BEGIN TO CHANGE: Eugene’s city council is now considering two new tools that could keep other companies from leaving a similar legacy of pollution. One proposal would make companies pay for “risk bonds” up front to cover future pollution costs. The other would create new zoning restrictions for industry abutting neighborhoods, including buffer zones for new development, quicker regulatory agency action on nuisance complaints and bans on activities like wood preservation.

In West Eugene, lawyers are also trying to seek monetary compensation for residents through two class action lawsuits against J.H. Baxter. And while the company’s explanation for the plant shutdown was financial, Arberry-Baribeault believes grassroots organizing helped drive the decision. In recent years, residents have become more informed about the pollution, and more vocal in calling for accountability. “We took down the big dogs,” she said. “That feels very powerful. That feels like any other place that’s doing what they’re doing should be afraid, ‘cause we’re coming for them.”

Still, she won’t be satisfied until J.H. Baxter pays for the damage it has caused. But in the meantime, neighbors are noticing birds returning to their yards. Mothers say their kids’ mysterious rashes are gone, and some no longer need their inhalers to breathe easily. And Arberry-Baribeault’s friend’s son beat cancer, as did her daughter Zion: She celebrated her 17th birthday on the day the plant announced it was ceasing operations.

Kylie Mohr is an editorial intern for High Country News writing from Montana. Email her at kylie.mohr@hcn.org or submit a letter to the editor. See our letters to the editor policy.