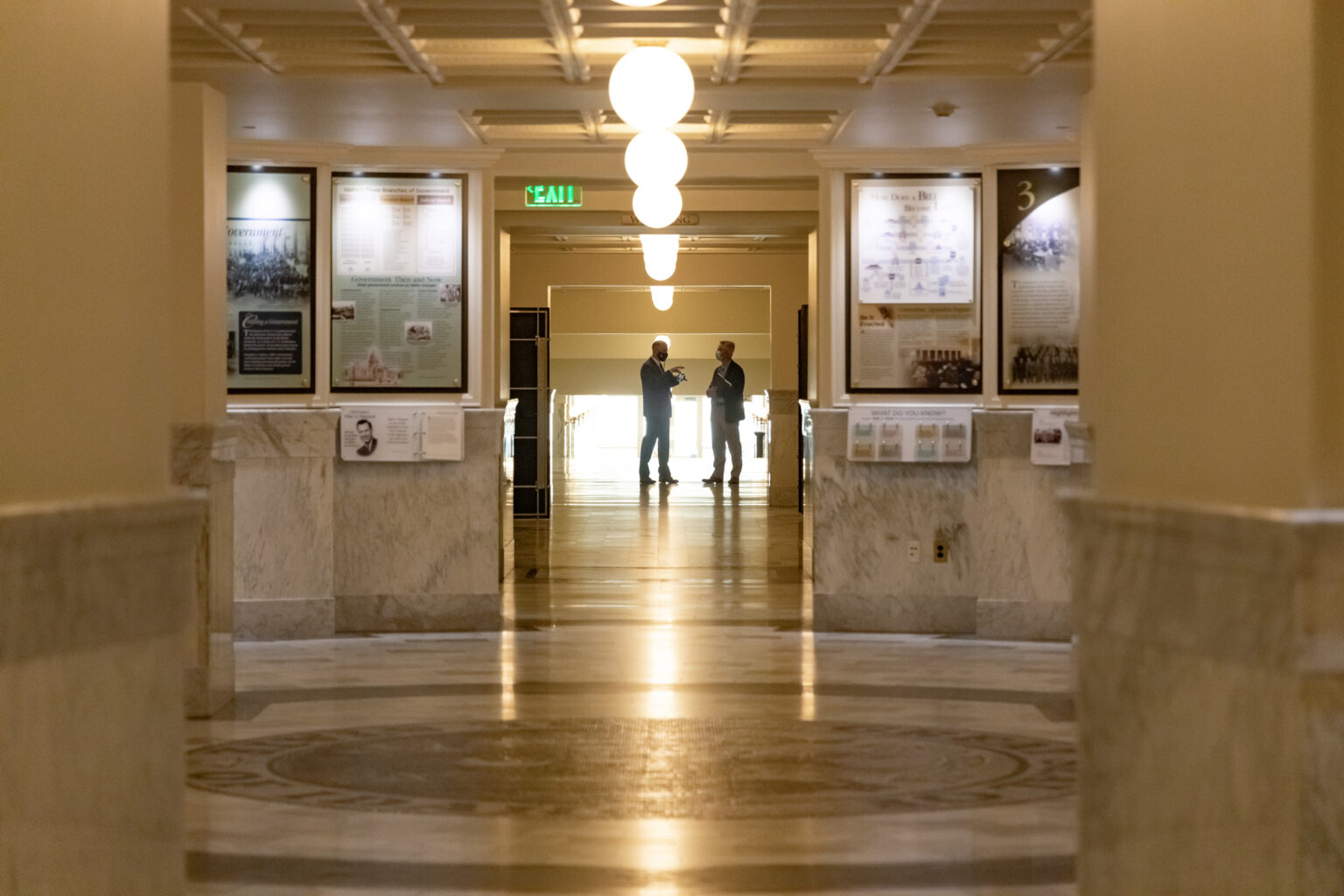 Lobbying or campaigning? Idaho political organizations did both before primary election

By Kelcie MoseleyJune 27, 2022No Comments

Home » Government » Lobbying or campaigning? Idaho political organizations did both before primary election

Sen. Jim Woodward, R-Sagle, started hearing about the messages reaching his constituents in mid-February, right in the middle of the legislative session.

“Sen. Jim Woodward partnered with far-left Democrats to kill a bill to protect parental rights in Idaho,” a Facebook ad that ran from Feb. 16 to 27 read.

“The question (from residents) was, ‘What’s Woodward doing down there? What’s wrong with him? How come he doesn’t represent us?’ And if you see me on a day-to-day basis, I am us,” Woodward said. “It’s easy to take one singular vote and critique it, but sometimes we voted yes on one bill and no on another, and they were both regarding the same topic, but you can cherry pick those votes. And then to the person who’s not following it on a day-to-day basis, you can present a picture that’s false.”

The ads were paid for by Idaho Freedom Action, the 501(c)(4) arm of the Idaho Freedom Foundation, a nonprofit organization founded in 2009 with a stated mission of “replacing the state’s socialist policies.”

The group has long been a focus of criticism for its influence over the Idaho Legislature and its activities in Idaho elections, particularly as a 501(c)(3) tax-exempt group. In the past year, the group also launched its own political action committee called Idaho Freedom PAC, and operates much of its campaign activities through those two entities.

Idaho Freedom Action has several of the same main staff members as the Idaho Freedom Foundation, including Wayne Hoffman as president, Dustin Hurst as vice president, and Fred Birnbaum as legislative affairs director. The PAC lists Hurst as its treasurer.

Until mid-April, Idaho Freedom Action reported all of its activities related to the legislative session as lobbying for specific bills under consideration in the Legislature. Between January and March, the ads the organization reported buying on Facebook totaled $35,708.

The Idaho Secretary of State’s office says there’s nothing illegal about the activity, and that the organization is careful about the wording of advertisements and other messages to comply with Idaho law.

But regardless of legality, Woodward said he doesn’t see the ads as lobbying efforts.

“When they’re putting those messages out in our home districts during the session, that’s negative campaigning is what that is,” Woodward said. “They already had their candidates chosen and they were starting the smear campaigns that proved successful.”

Lobbying is defined in Idaho Code as attempting to contact or cause others to make contact with members of the Legislature, legislative committees or an executive official to influence the approval, modification or rejection of any legislation. It also includes attempts to build relationships through goodwill or entertainment.

Agenbroad said he was also targeted by mass text messages that went out with the same rhetoric during the legislative session.

The text included a link to a form allowing the recipient to send an email to Agenbroad with their thoughts. He estimates he received between 50 and 100 emails from people as a result of the text, and several retracted their statements and apologized once he explained the text wasn’t true — that language in the bill specifically prohibited any national or state organization to influence the use of the grant funding, nor would it be used for any critical race theory instruction.

The group sent another mass text on March 7.

“On Wednesday, your state senator, Jeff Agenbroad, voted to fully fund California liberal Marlene Tromp’s social justice takeover at Boise State,” the text said. “That means pro-BLM, anti-law enforcement programs, LGBTQ+ initiatives, and safe spaces for liberal students. This is inexcusable and not conservative. Why is Jeff Agenbroad using your tax dollars to pay for this garbage. He owes you an explanation. Please email Agenbroad to let him know you’re disappointed with his support of leftist programs.”

The text referenced the entire higher education funding bill for the state, which was approved by the Joint Finance-Appropriations Committee and included funding for all of Idaho’s higher education institutions, including community colleges.

Agenbroad said he doesn’t see any of the ads or texts as lobbying either, and doesn’t think they should be reported that way.

“It’s wrong. I think it’s absolutely wrong,” Agenbroad said. “Particularly when you’re going to come out with misinformation and lies, people should be held accountable to that. I do not see the sunshine in their reporting like a candidate is held accountable to. Is anybody breaking any laws? I’m not claiming that. Are they exploiting the existing system? I think so.”

The laws surrounding campaign finance are complicated and often fall into gray areas, said Chad Houck, Idaho’s deputy secretary of state. It can be difficult to determine where the lines begin and end, and what should or shouldn’t be classified as an independent campaign expenditure rather than lobbying.

Although the lobbying ads focus on specific legislators, Houck said if the ads don’t include words to encourage someone to “vote for” or “vote against” that legislator in the election, it isn’t technically a reportable independent campaigning expenditure according to Idaho law.

“It’s a very, very fine line, but they are very meticulous in how they time their strategies, and they know exactly where that line is,” Houck said. “They never advocate for you to vote for them or support their candidacy, you’ll always see, ‘They voted this way.’ They’re making a statement of fact. And as a result, they’ve always argued this when pressed in the past, they are ‘educating the public’ about those individuals.”

Idaho law requires electioneering communications, which are ads or other messages meant to support or oppose candidates, to be reported within 30 days of a primary election. Between April 17 and May 17, Idaho Freedom Action reported electioneering communications on Facebook and Google amounting to $14,250. Those are the only ads reported as campaigning from Idaho Freedom Action.

Idaho Freedom PAC started reporting advertising expenditures on May 2. The PAC raised $55,225 between January and spent more than $50,000 of it before the May 17 primary, mostly on campaign advertising through Google and other hosts.

According to IRS records, Citizens Alliance has not yet received an official 501(c)(3) designation, which would make it exempt from taxation but also prohibit the organization from engaging in political activities.

Beginning in late January, the organization ran 24 ads on Facebook with cartoon depictions of legislators who had signed its pledge. The pledge includes promises to support election integrity and expand education freedom, and to never vote for any tax or fee increase or vote for any budget or spending bill that expands government.

None of the advertising shows up in campaign finance reporting before mid-April. Instead, the advertising was reported in lobbyist expenditures, totaling $24,853 between January and March.

To date, 18 lawmakers are considered in “good standing” with the organization for signing the pledge and not violating it during the 2022 legislative session. Many of those legislators also score high marks with the Idaho Freedom Foundation on its “Freedom Index,” which gives legislators a percentage score every session based on how closely he or she aligned with the organization’s scoring recommendations on bills.

More than a dozen other ads advocated for the Legislature to repeal the grocery tax, pass a bill banning any future mask mandates statewide, and accused Speaker of the House Scott Bedke, R-Oakley, and Rep. Paul Amador, R-Coeur d’Alene, of killing bills related to gun rights, election security and property tax reduction.

At the same time of the nonprofit organization’s founding in August 2021, Citizens Alliance of Idaho formed a political action committee of the same name, rather than launching a 501(c)(4) like Idaho Freedom Action. The PAC took in nearly $354,000 since the beginning of March and spent more than $337,000 to support legislative candidates who signed the alliance’s pledge, with $150,000 in support from the Citizens Alliance super PAC, which is based in Dublin, Ohio, and $30,000 from Doyle Beck, a board member of the Idaho Freedom Foundation and member of the Bonneville County Republican Party leadership.

The PAC posted less than a dozen ads on Facebook and Instagram that highlighted candidates for office — just 11 ads totaling $1,285, with simple messages and a real photo of the candidate rather than a cartoon.

Political science professor: No one wants to touch enforcement of laws

Maurice Cunningham, a political science professor in Massachusetts who wrote a book about dark money and has researched the Idaho Freedom Foundation’s dark money ties, said he has seen similar tactics in other states, but none quite like what is happening in Idaho.

“Not in the context of making what appear to be ads to benefit a candidate during a campaign and claiming it’s lobbying,” Cunningham said. “That’s a different kind of question. I think it’s really problematic.”

When it comes to enforcement of state laws or federal laws related to the IRS, Cunningham said no one wants to touch it, because it’s all political. That has always been the case to a certain extent, he said, but it has gotten worse in the past five years or so as the political environment grows more heated and polarized.

“A lot of politicians in the whole political corpus, they adjust to it. (They) adjust to it and they find a level of contentment in it, and they don’t fight it,” Cunningham said.

Cunningham said when organizations run various different branches, it essentially becomes a paperwork exercise. As long as the group is careful with recordkeeping, it won’t run into trouble with the law.

“But even those who are sloppy, the IRS has so little capacity because it’s been starved (budget-wise) for so long, and the IRS itself has been intimidated by largely conservative forces,” Cunningham said. “And it’s left a huge advantage for monied interests to kind of plow through knowing they’re not going to be cracked down on for the most part.”

FEATURED IMAGE:  Prominent political interest groups in Idaho advertised heavily during the 2022 legislative session against candidates for office and reported it as lobbying activities. The Idaho Secretary of State’s office says they’re doing nothing wrong legally, but the candidates say it’s negative campaigning that should be reported as such, not lobbying. (Otto Kitsinger for the Idaho Capital Sun)