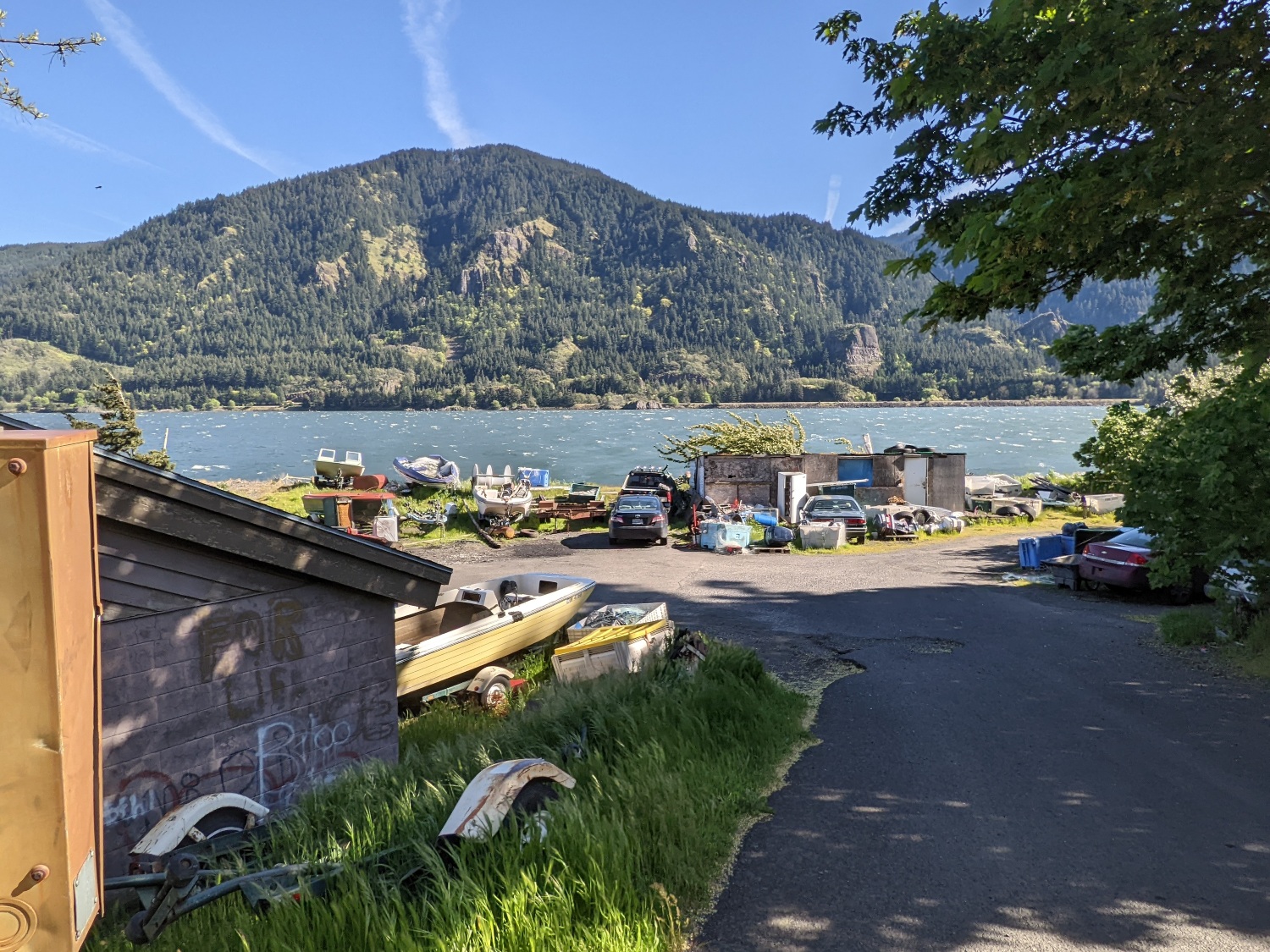 By Chris AadlandMay 6, 2022No Comments

This story originally appeared on Underscore.news.

Inadequate sewer and power systems, unsuitable housing or shelter, increasing crime, lack of internet or cell phone service, drinking water wells that are easily contaminated, and abandoned vehicles and boats — those are just some of the problems that have stacked up for managers of the 31 so-called “in-lieu” and “treaty fishing access sites” along the Columbia River.

The federal government created the sites in Washington and Oregon after the construction of dams on the river flooded tribal villages and fishing sites and displaced citizens of the four Columbia River treaty tribes whose ancestors had lived along the river and relied on its salmon for thousands of years.

But now, after the four treaty tribes have fought for years to be compensated for the loss of the land, the federal government says it’s serious about finally addressing the sites’ infrastructure deficiencies.

During a tour of three sites on May 3, the top federal official overseeing tribal affairs in the U.S. announced that the government would provide $880,000 to allow for the development of a plan to upgrade infrastructure at three of some of the neediest tribal treaty fishing sites. The money will also be used to tackle immediate problems like fixing shower and bathroom facilities and removing hundreds of abandoned vehicles and boats.

“This is a down payment,” Department of the Interior Assistant Secretary for Indian Affairs Bryan Newland said while visiting the Cooks Landing in-lieu site on the Washington side of the river. “We’re trying to get the infrastructure here up to a place that’s fit for the people who’ve always called this place home.”

The money is part of larger project funding announcements that Newland made during his visit.

On May 3, Newland announced a $10.65 million package to repair and upgrade Bureau of Indian Affairs (BIA)-owned water systems that had experienced contamination, Environmental Protection Agency (EPA) violations or were at risk of failing. More than $8.7 million will be used to address unsafe arsenic levels in drinking water on the Hopi Tribe’s reservation in Arizona, in addition to $1.05 million to replace a deficient and deteriorated water distribution system for the Pacific Northwest’s Nez Perce Tribe.

The following day, Newland announced nearly $10 million to augment or start six irrigation projects across Indian Country, including a $3.74 million project on the Yakama Indian Reservation in Washington. Newland was also scheduled that day to attend a day-long event hosted by the Yakama Nation to hear from tribal leaders and community members about the missing and murdered Indigenous person epidemic and the need for more urgent federal actions in central Washington to stem the crisis.

The allocations that Newland announced come from a $13 billion pool of money set aside for tribal communities and Indian Country projects in the $1.2 trillion infrastructure bill signed by President Joe Biden last year.

‘A historic lack of investment’

The construction of dams on the Columbia River, starting in the 1930s, led to millions of jobs, economic development for the region and cheap hydroelectric power. But the dams also meant the loss of fishing sites and villages where tribal members lived and fished for sustenance and their livelihoods, which, according to tribal leaders, has contributed to chronic poverty and unhealthy and unsafe living conditions for tribal members living along the river today.

To compensate the tribes for the loss of those traditional places, the federal government began acquiring and developing a series of in-lieu and treaty access fishing sites to enable tribal citizens to again exercise treaty-guaranteed fishing rights in “usual and accustomed places.” Development of the last site was completed in 2011.

The sites were designed to allow tribal members to access the river on a temporary basis. But, with a lack of affordable housing nearby, many tribal citizens began living at the sites, which were far from the four tribal nations’ reservations and the services, like health care, located there. With the combination of overcrowding from unintended habitation and the federal government not providing adequate services at the sites, people at many of the sites now live in distressed, unsafe and unhealthy conditions.

When it was acquired in the late 1950s, Cooks Landing where Newland made his announcement was one of the first in-lieu sites to be developed. Between 20 and 25 Indigenous people live there year-round, a number that grows to 45 or so during the fishing season, according to the Columbia River Inter-Tribal Fish Commission (CRITFC), which manages the 31 treaty sites.

“Access to clean water is a fundamental human right. For decades, tribal fishers have struggled trying to meet this need,” said Aja DeCoteau, CRITFC’s executive director. “The water system improvements this funding will make possible will improve the health and dignity of tribal fishers and their families along the Columbia River.”

The four Columbia River treaty tribes — the Nez Perce Tribe, the Confederated Tribes of the Umatilla Indian Reservation, the Confederated Tribes of the Warm Springs Reservation and the Confederated Tribes and Bands of the Yakama Nation — formed CRITFC in 1977 to help them advance their policy and management interests in the Columbia River Basin. While the Portland-based treaty rights organization’s goal centers around protecting and restoring salmon populations, it has grown to operate a police department that is responsible for public safety at the in-lieu and treaty fishing access sites. The organization also provides basic services and management at the sites.

At Cooks Landing, the water supply wasn’t meant to handle its current level of use, and contaminated well water led to an EPA violation levied against the BIA in 2019, according to CRITFC. A new well has since been drilled.

In addition, the wastewater system, which requires frequent and costly pumping, also needs to be upgraded, and there’s no nearby fire hydrant to help extinguish fires. The bathroom and showers are also in need of improvements. And despite clean-up attempts, abandoned vehicles and other types of discarded property quickly accumulate among the trailers, campers and small shacks that site residents call home.

During his tour, Newland said the condition of the site and the well contamination weren’t the fault of those who lived there, but instead the “result of a historic lack of investment in the basic infrastructure here.”

“You don’t have to spend a lot of time here to see that … infrastructure is lacking, so I’m really glad and excited that we’re able to make this investment,” Newland, who is a citizen of the Bay Mills Indian Community, said.

Attempts to fix the problems

CRITFC employees on the tour said conditions at the sites vary, but the need for the federal government to address basic infrastructure needs is apparent at all.

The $880,000 isn’t the first attempt to address issues at the sites in recent years.

In 2019, Biden signed a bill spearheaded by Congressional Democrats in the Pacific Northwest that dedicated $11 million to begin addressing unmet federal obligations to maintain the sites through safety and infrastructure projects like electric hookup improvements and the hiring of more police officers.

The legislation also called for the sites to be studied. CRITFC recently started the assessment, which will lead to recommendations for improvements and determine usage levels, current conditions and deficiencies at the sites, as well as cost estimates for improvements. A final report is expected this summer.

When the need for basic services became more glaring during the COVID-19 pandemic, CRITFC began offering some basic healthcare measures like administering vaccines and partnering with local healthcare provider One Community Health and the Oregon Community Foundation to buy and outfit a mobile medical van.

Another urgent need, according to CRITFC, is affordable housing that allows access to the sites and gives residents a safe, adequate place to live near the river. Instead, many tribal members have used the sites, including the one Newland toured with an Indian Country Today and Underscore.news reporter, as long-term or permanent housing in small plywood shacks, trailers or campers. Neither the 2019 legislation nor the recent announcements from Newland addressed housing.

The Yakama Nation is working on an affordable housing development near the river on the Washington side in Wishram Heights. The U.S. Army Corps of Engineers is also developing a plan to build homes for tribal citizens near The Dalles to replace homes lost to flooding due to dam construction.

The recent tour wasn’t the first time high-ranking federal officials and politicians have visited the sites; Newland also toured some of the sites last fall with Oregon’s two U.S. senators.

Someday, DeCoteau envisions well-kept sites with ample access to amenities like fresh water, showers, working toilets and electricity hookups. She said the government’s fulfillment of its promises would also include access to affordable housing near the sites so tribal citizens could live near the river without inundating the treaty fishing sites and overwhelming their services.

DeCoteau, a citizen of the Confederated Tribes and Bands of the Yakama Nation and a descendent of the Cayuse, Nez Perce and Turtle Mountain Band of Chippewa Indians, said CRITFC is discovering that conditions at many sites make them unappealing to many tribal members who might otherwise take advantage of them.

“People know these sites exist. They don’t want to bring their kids down here, though,” DeCoteau said. “How do we teach our next generation of fishers if they don’t even feel safe coming to these sites where they can catch a treaty-reserved fish?”

Jeremy Takala, who is a member of both the Yakama Nation Tribal Council and CRITFC governing board, said the hydroelectric dams have led to advances for the region, but that citizens of the four Columbia River treaty tribes and those who use the fishing sites are “getting left further and further back.” The severed connections to the river resulting from the dam construction and flooding, he said, have contributed to the ongoing historical trauma many Yakama and other Indigenous people experience.

Still, Takala and DeCoteau said they’re optimistic that the $880,000 infusion, along with the two recent visits from government officials and lawmakers, is a sign the government is committed to fulfilling its promises.

“I know things don’t happen overnight,” Takala said at the Cooks Landing site. “But I hope that we keep moving forward to the next steps.”

FEATURED IMAGE: Cooks Landing, one of 31 in-lieu and treaty fishing access sites along the Columbia River, is pictured on May 3. Photo by Chris Aadland/Underscore.news and Indian Country Today

This story is co-published by Underscore.news and Indian Country Today, a news partnership that covers Indigenous communities in the Pacific Northwest. Funding is provided in part by Meyer Memorial Trust.