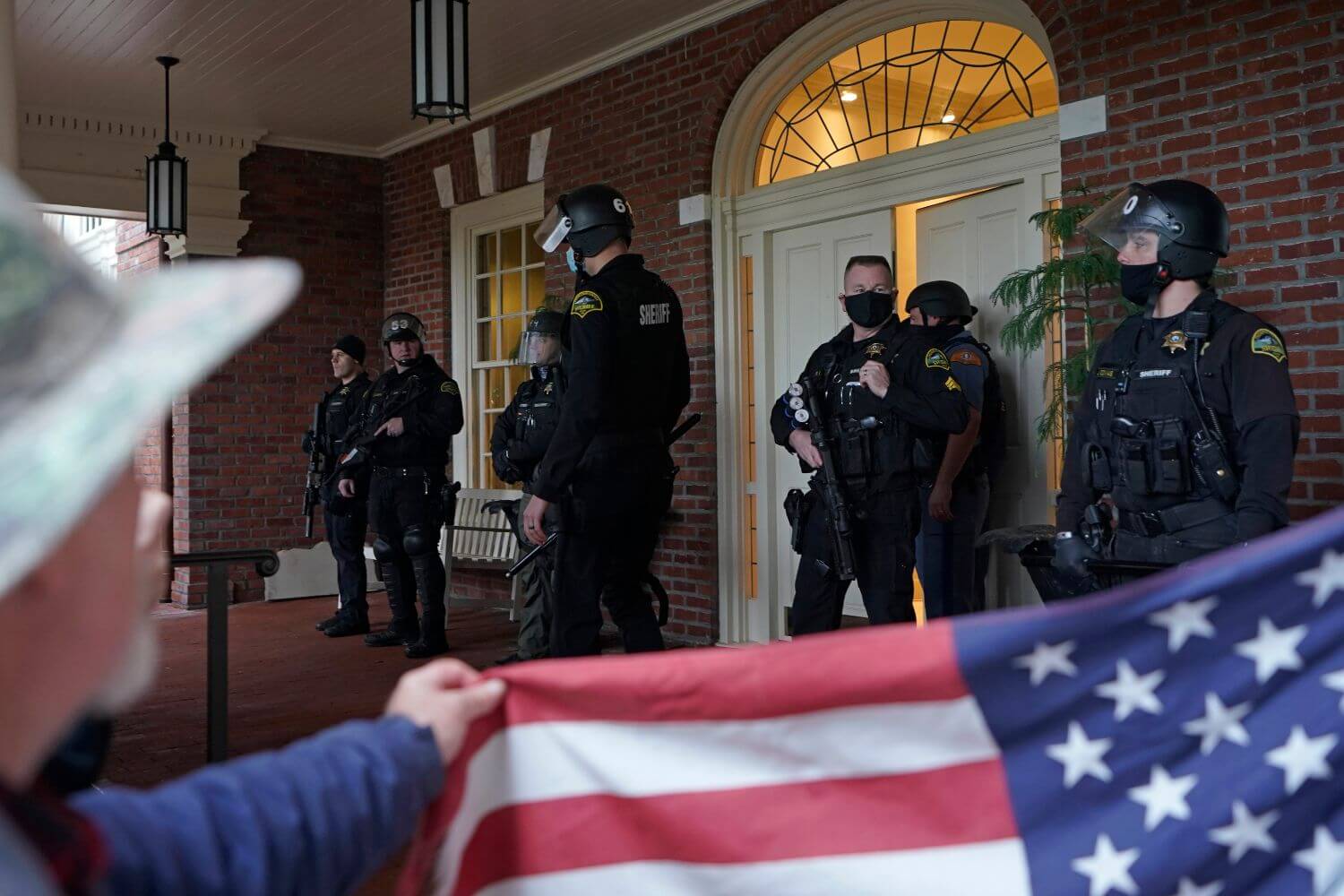 In the wake of insurrection, Washington lawmakers look for options to derail ad hoc militias

OLYMPIA — In the wake of anti-government mobs invading the U.S. Capitol and armed demonstrators gaining access to the grounds of the Washington Governor’s Mansion on Wednesday, state lawmakers are considering new restrictions on armed groups operating in public.

Three Percent of Washington, a far-right paramilitary organization, had announced plans to occupy the Legislative Building here in advance of the Legislature convening next Tuesday. But the group on Thursday canceled those plans after the incursions onto government property in D.C. and Olympia.

Even before this week’s events, key legislators said they would consider a handful of bills tightening state legal restrictions on groups carrying weapons in public. Their moves aim to address the proliferation of assault-rifle-carrying vigilantes who have become increasingly commonplace at Black Lives Matter demonstrations and on the Capitol steps.

State Rep. Tana Senn, D-Mercer Island, is preparing to introduce legislation she contends would be both constitutional and helpful in invigorating Washington’s longstanding bans on private militias.

Washington, like many states, has laws against forming private military organizations. But police rarely enforce the laws, in part because the statutes are widely viewed by police and prosecutors as vague and unenforceable, as InvestigateWest reported in November.

Racial justice demonstrators spent months voicing concerns about intimidation and the danger of mass violence to little result, even as some armed groups have turned increasingly belligerent across the Northwest. Wednesday’s insurrection in Washington, D.C. and brief standoff outside the Washington governor’s mansion overshadowed smaller, earlier anti-government actions; in December, for example, far-right protesters broke into the Oregon State Capitol building.

Senate Law and Justice Committee Chair Jamie Pedersen, a Seattle Democrat whose committee would likely need to bless any changes like those Senn is proposing, told InvestigateWest in November that he doubts a law criminalizing intimidation by armed, organized groups could pass constitutional muster, predicting it could “do more harm than good.” However, Pedersen said on Tuesday that he would support new restrictions on gun possession at protests or near the Capitol.

In the early 2000s, Senn pushed for the state’s civil disorder training law, which criminalizes training others to use bombs, firearms or “any device” capable of causing significant injury during a violent disturbance like a riot. That law, Senn said, was aimed at preventing training camps run by violent white supremacist groups in Idaho, such as Aryan Nations, from crossing into Washington.

Senn now hopes to reinvigorate existing restrictions on paramilitary groups through a bill that would make menacing others as part of an armed group a felony. Senn’s bill, which is currently being drafted, would amend existing law to criminalize threatening, organized conduct.

“The bill basically says if you are brandishing a weapon in order to intimidate, and you’re with one or more other person, then you are engaging in civil disorder activities,” Senn said.

If enacted, Senn’s bill or related legislation would empower local jurisdictions currently grappling with paramilitary conduct at demonstrations. It would likely have to pass the House Public Safety Committee, which is chaired by Rep. Roger Goodman, a Democrat from Kirkland.

Goodman said Wednesday that he supports legislation like Senn’s that would make operating as a paramilitary a felony.

Saying he is concerned about the trend toward armed conflict, Goodman said he supports banning weapons on the Capitol campus here, but declined to voice support or opposition for banning weapons at public demonstrations.

“There is this balance between firearm rights and firearm safety,” Goodman said. “The question is, what is a menace? What is intimidation? I would have to take a look at the (proposed legal) language” in any bill that is filed.

Racial justice advocate Afrose Ahmed of the Tri-Cities’ Black Lives Matter movement hopes for help from Olympia after “militia-type folk” pointed assault rifles at her and other marchers last summer, she said.

Counterprotesters drove past the peaceful crowds pointing guns at her and others, Ahmed said. She notified police and was among more than 13,000 people who signed a petition demanding that the Tri-Cities governments take action. Police made one arrest. Nothing else changed.

“I don’t know how to impress on people who don’t feel the fear of being targeted by white supremacist institutions, whether state-sanctioned or not,” said Ahmed, a poet and activist who was raised in Kennewick. “If you don’t experience that, you don’t really understand how devastating it was.”

Some local governments have taken notice. The Spokane City Council passed a resolution calling for Spokane police to enforce the same anti-militia laws Ahmed cited in her petition to the Tri-Cities governments. In Olympia, the City Council wrote a letter to Gov. Jay Inslee and other state leaders asking for help prosecuting militias, which council members saw “causing fear and intimidation.”

Lawmakers are also eying a ban on weapons at protests as a potential solution. Sen. Patty Kuderer, a Democrat from Bellevue, has filed a bill to ban weapons at public demonstrations and on the state capitol campus, which has been the site of several violent clashes.

Kuderer noted two recent shootings at protests in Olympia, including one that saw a racial justice protester seriously injured. Neither has been definitively tied to armed paramilitaries.

Sen. Pedersen, the Law and Justice Committee chair, acknowledged what he sees as a “troubling trend toward armed conflict” and said this week that he supports Kuderer’s proposed ban on weapons at demonstrations. Pedersen said he doesn’t believe additional restrictions on paramilitary conduct are practical, or necessarily address the concerns of demonstrators.

The issue the Legislature should resolve, Pedersen said, “is the fact that [counterprotesters] are armed and therefore chilling the expressive acts of other people.”

“That they are dressed up in fatigues or some other official looking uniform, that doesn’t bother me,” he said.

Last year, Senn introduced a bill to ban weapons on the capitol campus after more than 100 armed demonstrators showed up to support a state representative who’d been booted from the Republican caucus after an investigation found he’d engaged in terrorism. Senn said she plans to reintroduce the capitol campus gun ban.

Sen. Manka Dhingra, D-Redmond, and Rep. My-Linh Thai, D-Bellevue, both voiced support for restrictions on weapons at the capitol campus. Both would have a say in any new prohibitions; Thai is a member of the House Civil Rights and Judiciary Committee, while Dhingra serves as vice chair for the Senate Law and Justice Committee.

Dhingra said she also wants to discuss banning weapons at protests, rallies and parades. A former prosecutor, Dhingra doubts prosecutors will use the state’s existing anti-paramilitary laws unless the offense is egregious.

But there’s no consensus on the gun restrictions among Democrats, who control both legislative houses and the governor’s office.

While he is supportive of legislation constraining armed vigilantes, Rep. Jesse Johnson, a Federal Way Democrat serving as vice chair of the House Public Safety Committee, said he’s concerned that a ban on guns at protests could have unintended consequences, particularly in urban areas that have seen frequent protests.

In Seattle, Johnson offered, “if you’re protecting your business with a gun, you’re probably going to be near a protest, because of just the way that the city is laid out physically.”

Some Republican lawmakers in Olympia appear poised to oppose any new restrictions. A few, like Rep. Robert Sutherland, R-Granite Falls, have even participated in the armed counter protests.

Sutherland, who sat on the House Public Safety Committee last year, was one of the armed vigilantes who responded to Black Lives Matter demonstrations in Snohomish. On June 1, Sutherland posted a photo of himself on his Facebook page with three men, all standing together and holding assault rifles.

“Late night tonight defending my little town of Snohomish from rioting and looting by antifa thugs,” Sutherland wrote on Facebook, using language viewed by some as racially coded. Sutherland did not respond to an email request for comment.

State Rep. Brad Klippert, R-Kennewick, is the No. 2 Republican on the Public Safety Committee and a deputy sheriff for the Benton County Sheriff’s Office.

Klippert said he was not aware local Black Lives Matter movement organizers had threatened to sue agencies in the Tri-Cities, including the Benton County Sheriff’s Office. Klippert described the armed vigilantes in sympathetic terms.

“There are people out there who are very concerned about what is going on in America,” Klippert said. “They are taking actions to protect themselves.”

Not that that has stopped hundreds of Washington residents from joining groups that are, by all appearances, armed paramilitary organizations.

In November, Mary McCord, legal director of the Institute for Constitutional Advocacy and Protection at Georgetown Law School, wrote the Washington State Patrol, Clark County Sheriff and chief of police in Vancouver to warn them of a then-upcoming rally hosted by the far-right group Patriot Prayer. In the letter, McCord outlined existing state laws against paramilitary conduct and urged local authorities to enforce them.

Shane Burley, a journalist covering the Nov. 7 event, said about half of the roughly 200 attendees were armed. Some wore tactical vests and used two-way radios. Burley told InvestigateWest he only saw half a dozen police officers stationed near the crowd.

Demonstrations by armed right-wing groups have drawn light, often cordial responses by police, even in cities where police have violently dispersed racial justice protesters. Those on the receiving end of police action and “patrols” by paramilitary groups see a blatant double standard.

Ahmed said police didn’t come near the Black Lives Matter demonstrations in the Tri-Cities unless they heard reports of property damage. At the time, predominately white militia members sat on the periphery of peaceful demonstrations, taking notes and pictures, and pointing guns.

The armed groups roamed the Tri-Cities at night, with the stated purpose of protecting businesses. Ahmed said that every elected official she contacted for help told her the responsibility to stop militia groups fell under someone else’s jurisdiction.

“This is the place that is supposed to be my home, and people like me literally didn’t feel comfortable stepping out into the street,” Ahmed said.

“If those are the kinds of communities that they want to call their constituencies, I would ask them to take a really long, hard look at why they have sought positions of power.”