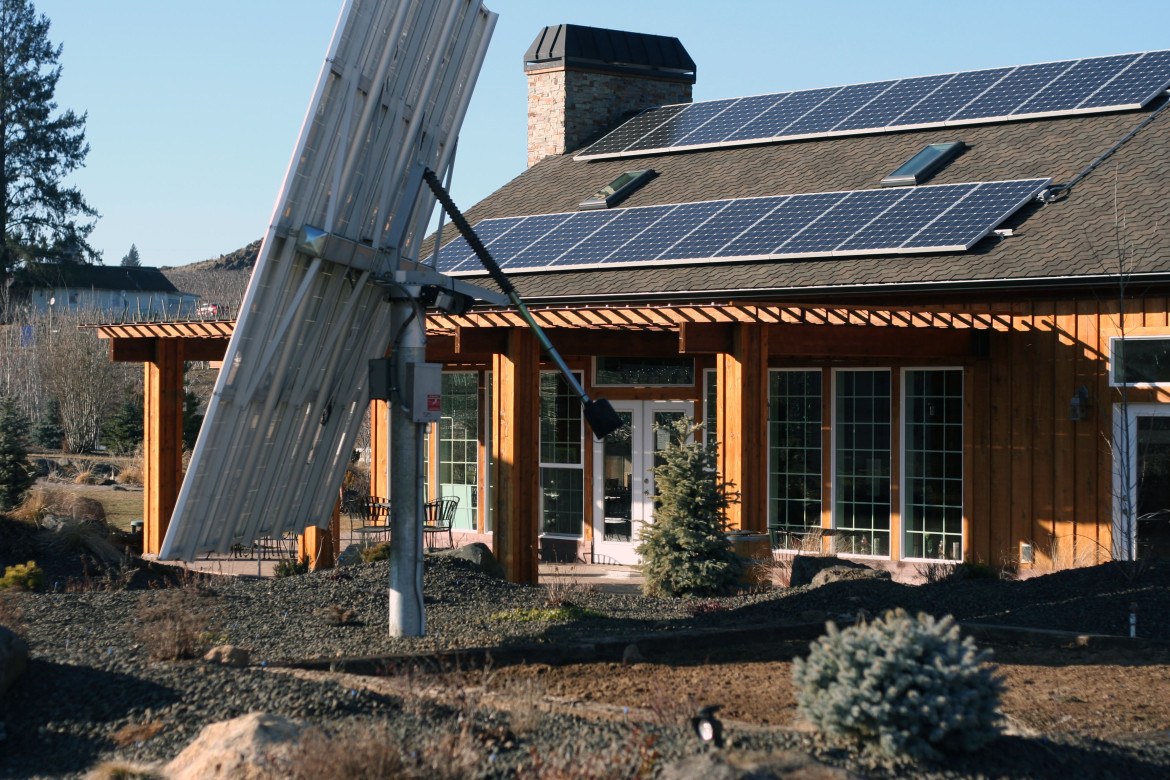 Reporting on key environmental bills in the Washington legislature.

With an end to the program looming, Inslee says action is needed now. But a legislative remedy is languishing in a House committee where the chairman is struggling to gain consensus from a variety of interests — including electric utilities that have been wielding their massive political clout.

At issue is whether – and how much – state taxpayers should continue to subsidize adoption of solar that is currently costing taxpayers $4.2 million a year.

Solar industry officials in Washington see this as a moment of opportunity. The cost of solar is lower than ever. They hope business will take off if the state payments are extended. But representatives of out-of-state leasing companies criticize the House bill for failing to ensure that utilities will keep paying market rates for solar power generated by home-based systems.

Lobbyists for electric utilities also see opportunity. And they have considerable lobbying clout. Long leery of solar’s potential impact on their business model, some utilities are seeking changes. They want to levy a new charge on solar customers to offset the cost of maintaining power lines and related equipment used to move power to and from their homes.

In a legislative session headlined by climate change debate, a failure to reach consensus on the solar legislation (HB 2045) would mark yet another failed legislative effort to deal with the threat.

State payments to homeowners and others who install rooftop solar are not scheduled to end until 2020, but officials fear that as fewer and fewer years of payments are available, consumers will be less and less likely to go solar.

“From the governor’s perspective, this is the year to get something done,” said Keith Phillips, who advises Gov. Jay Inslee on climate and energy issues. “We have been working on this a long time.”

Even before getting out of committee, the legislation by Rep. Jeff Morris, D-Mount Vernon, has stirred fierce opposition, with one national solar activist claiming the bill would make Washington the “most anti-solar state in the country.”

The legislation’s sponsor is aware of the strong emotions in play. “I was joking the other day,” Morris said, “and I called it the solar wars.”

Washington lags behind in solar

Despite offering some of the most generous incentives in the nation to install rooftop solar, Washington has never become a solar leader. Seattle, unlike Portland, doesn’t even make the list of the nation’s top 20 solar cities.

A huge impediment has been upfront costs. State law prohibits incentives to homeowners who lease solar equipment. Now the Legislature is poised to allow leasing companies to enter the market, as they have in California and other states, and to grant them incentives as well.

Under current law, if a homeowner buys solar equipment this year, the owner will receive only five years of state reimbursements before the program expires in 2020. That compares to 15 years of payments for a purchaser who started in 2005, when the incentive program began. However, prices were higher then: the cost for a typical 4-kilowatt system installed today is about $12,000, compared to about $28,000 in 2008, said Jeremy Smithson of Solar Installers of Washington, a statewide trade association.

The reimbursements, calculated on the number of kilowatt hours generated each year, can be total up to $5,000 per year for large systems.

Some 6,500 solar units in Washington state are enrolled in the incentive program. In 2014 alone, solar electric generation increased by 25 percent, according to Washington State University Energy Program.

“It’s also time to modernize this program, but we don’t have a particular prescription at this point,” Phillips said, speaking for the governor.

Other issues to be decided by lawmakers — with a promise for expanding solar installations — include extending the incentive program to encompass leasing companies, electric utilities and larger commercial solar operations.

Some electrical utilities are pushing back against what could become a massive expansion in solar energy.

Utilities in Washington and across the country, especially smaller ones, fear that when solar energy becomes a significant contributor of electricity, it could cause power fluctuations on the electrical grid. These fluctuations, which can damage sensitive electronic equipment, would be most noticeable during sunrise and sunset and during sudden changes in weather.

Advocates of solar power say such concerns about disruptions of the power grid are largely a myth, since solar power can actually help balance the load in many cases. Where problems do occur, however, technical solutions are available, they say.

The wrath of many utilities has been particularly focused on net metering, a popular incentive program approved in Washington and most other states that can make it harder for utilities to recover the cost of maintaining power lines and related equipment.

Net metering essentially allows consumers with solar power installations to sell excess power back to the grid at retail prices. In a true net-metering installation, the homeowner can watch the electric meter run backward when the system is producing more energy than what is needed to serve the home at any given instant. If the meter runs backward more than forward over the course of a year, then the system has produced more energy than has been consumed. Consequently, the homeowner pays nothing for electricity.

In addition to lower utility bills, Washington solar consumers also get cash payments through their utility company from the state.

To qualify for Washington state’s cash incentive program, most solar homes have separate production and consumption meters, since the incentive paid is based on the power actually produced. Most utilities have a base fee that everyone pays plus a consumption fee for electricity used. Typically, the base fee does not pay the full cost of maintaining power lines and substations, utility officials argue. So when a customer with solar comes out with a “net zero” bill, he or she is not paying enough for a system that works like a near-perfect battery, said Dave Warren, director of energy services for the Washington Public Utility District Association.

Everyone agrees that a few solar installations generating power for a full-size utility makes little difference, Warren said, but at some point solar energy can become a disruptive force, creating additional costs for the system. In California, he said, General Electric has been forced to redesign some gas turbines to respond more quickly to load changes resulting from shifts in the contribution from solar energy.

Morris, one of the original advocates of net metering, said he remains committed to the concept in his bill this year. Because of utilities’ initial fears, current law allows a utility to stop offering net metering to new customers when the total generation from solar power reaches 0.5 percent of the utility’s peak demand, as recorded in 1996.

“Some of the most credible studies show that you won’t see a huge impact on the distribution system until it gets up around 10 percent,” Morris said. “I just tell people that because the whole system is so complex, it is easy to oversimplify. The cost-shifting issue is a myth, because the way people pay for electricity has a tremendous amount of cost-shifting built into it.”

Morris opposes a proposal from some utilities to charge solar users a flat fee.

Morris’ bill would offer lower annual cash incentives than what solar users receive under the current law, but it would extend the payment period out 10 years from the date of installation. As in the current law, it would provide additional financial incentives for equipment manufactured in Washington state. Final numbers are being worked out. Unless extended by future legislation, equipment installed after 2020 would not be eligible for the 10 years of incentives.

Morris’ bill would also call on utilities to plan 10 or 20 years ahead and figure out how they will manage the growth of alternative energy. If they do the planning, the bill outlines options other than net metering that would be open to them.

“This is the gateway for them to get to other methodologies to manage for solar before it comes online,” he said. “They don’t need to wait until they reach one-half percent. If they do this, they will see that they can leave net metering the way it is.”

Morris said utilities need to embrace solar power and make it work on localized grids to reduce the cost of massive transmission lines. If they respond, they can survive the changing energy market. If they don’t, their customers might look for ways to get off the grid. New battery technology, for example, could leave electrical utilities following in the footsteps of hard-wired phone companies.

The bill would also open the door to state-funded cash incentives for utilities and businesses that install solar equipment. Leasing companies also would be allowed to claim an incentive, according to Morris, but it might be just half as much as equipment owned by a homeowner. His rationale is that leasing companies have access to federal tax credits and special financing arrangements because of their size.

“Rooftop solar leasing is the best way to go solar,” declared Bryan Miller, co-chair of The Alliance for Solar Choice, which represents some of the largest leasing firms in the country. “It is not even a close decision for most people.”

In California, which far outpaces every other state in solar energy, leasing has been the dominant method of getting solar up on the rooftops. Miller insists that leasing companies are not likely to operate in Washington state as long as net metering remains on the chopping block.

“We are not focused on the incentives,” he said, suggesting that a long-term commitment for net metering is the key to leasing arrangements.

Miller’s solar alliance is leading a letter-writing campaign in opposition to Morris’ bill, saying it would end net metering and deprive Washington of a strong clean-energy market. An online petition connected to the campaign asserts that Morris’s bill “would eliminate a homeowner’s right to produce clean energy, making Washington the most anti-solar state in the country.”

The bill does not eliminate a homeowner’s right to produce solar power, but it would change how the owner is reimbursed.

Morris disputes the leasing companies’ assertions. He says leasing companies will enter the Washington market, and some may even be formed by investor-owned utilities operating in this state. Other utilities might outright own and operate equipment on people’s homes and pay them for the privilege, he said.

At the request of the governor, Rep. Jake Fey, D-Tacoma, who works as director of the Washington State University Energy Program, met with a variety of people involved in solar energy through the summer and fall. From those discussions, Fey submitted legislation early in the session. Since then, the Fey bill has gone nowhere.

Morris, who chairs the key House Technology and Economic Development Committee, has kept the focus on his own bill as he struggles to gain consensus among representatives of public and private utilities, solar-installation companies and clean-energy advocates. Morris said he hopes to move his bill out of committee within the next week or so. Even if his bill gets through the House, it could be killed in the Republican-controlled Senate if utilities are largely opposed, he acknowledged.

“We are in constant negotiations,” Morris said. “We have to get 80 percent of the stakeholders on board, and it is so easy for people to confuse the issues. Unless we get 80 percent, we can’t get this through the Legislature.”

Christopher Dunagan reports on the Washington legislature and the environment for InvestigateWest.