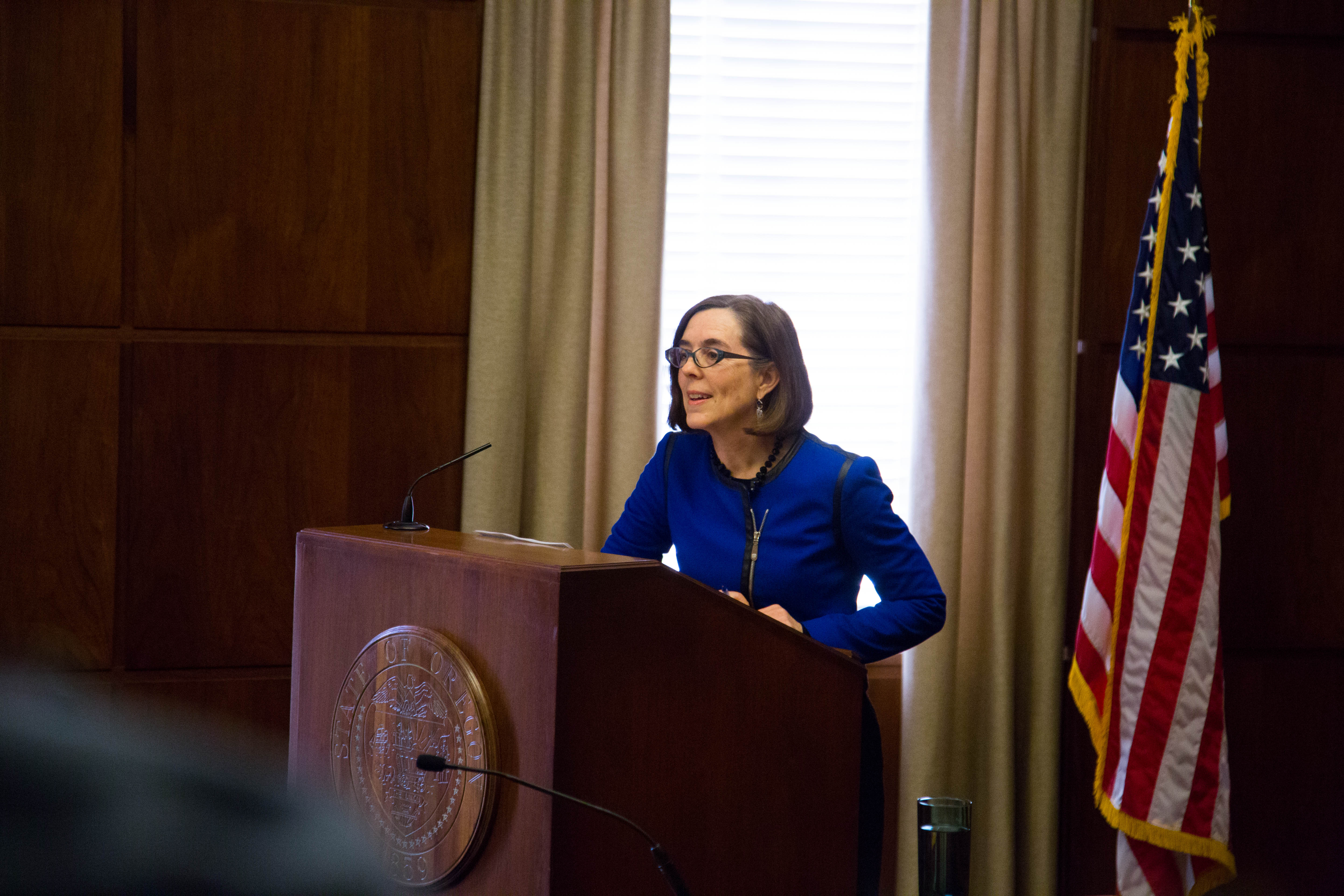 By now you’ve heard the news: our newly minted Gov. Kate Brown is cracking down. She’s pro-transparency. And she’s asking the Legislature for an audit of state agencies’ compliance with public records law.

In her rollout of transparency reforms, Brown proposed this and two other bills. One tethers the spouses of the governor to state ethics rules. The other strengthens the powers of the Oregon Ethics Commission by dragging it out from under the governor’s thumb, among other things.

If you’ve followed state politics for the last month or more, then none of this is a surprise. Brown’s plans are a response to issues highlighted by John Kitzhaber’s resignation on the eve of the state’s 156th birthday, problems Brown promised to solve against a backdrop of banners and frosted sheet cake.

In announcing her solutions in a press release March 11, Brown’s own record on transparency in the governor’s office reads like those Krispy Kreme promos that turn PR numerics into news: Brown has closed 12 of the 34 public records requests received so far as governor, and 5 of the 108 still pending from the Kitzhaber administration.

No doubt, her record on transparency is impressive. Brown spent 17 years in the Oregon Legislature and seven as Secretary of State without ever being sued in a dispute over access to public records. Those in her charge also never provoked any particularly shocking orders to release documents by the Attorney General‘s office. She also put the Secretary of State’s office on TRIM software, among the most robust of systems meant for archiving electronic records of any kind. That she has since made TRIM available to every other state and local government in Oregon on the cheap puts Hillary Clinton to shame.

But impressed as I am with Brown’s own track record on transparency, and her interest in reform, I’m much less excited about her plans. Here’s how I read her press release: This problem is under control. I’m taking swift action to ask the Legislature for permission to study it. And I will bring you reforms a year from now, when everyone’s forgotten about it long enough to make opposition palatable again.

I won’t bore you with a recap of how many times Oregon has been here. Case in point being Attorney General Ellen Rosenblum’s recent proposal to convene a second AG taskforce on transparency, giving some of us a painful case of déjà vu stemming from the first one ordained by her predecessor.

From what I gather, with Rosenblum’s idea in swing and Brown at the helm of Oregon, there have already been a lot of meetings. Stakeholders are getting around tables talking about what they’re going to talk about. The government groups that typically stand in the way of such things are also sounding like they plan to play ball.

“I think we’re willing to talk about it and talk about the rest of the Public Records Act as well,” said Rob Bovett, legal counsel for the Oregon Association of Counties, which stood steadfast against reforms to Oregon Public Records Law as recently as four years ago.

It all sounds fantastic, in particular if you like meetings for the sake of meetings, or navel-gazing like it’s some kind of sport. But it sounds to me like a whole lot of wheel-spinning.

My gripe? Brown is the governor. She’s promised solutions. And now she’s asking the Legislature for permission to study the problem — permission she does not need. It’s here that her long history of consensus-building politics, usually a strength, looks tepid. And the sad part is that she’s missing a moment to pull the trigger on a transparency reform bill — a real one, not a permission slip — before the usual grandstanding opposition from government groups will be politically safe again.

The bottom line: if Kitzhaber had turned over documents to Willamette Week’s Nigel Jaquiss when he requested them back in July, Jaquiss says the paper could have gone to press sooner with more information about Cylvia Hayes’ use of public resources in her consulting work, and about Kitzhaber’s culpability in whatever she was up to. That means voters would have had a shot at electing a governor who could have stayed a governor.

But that isn’t what happened. What happened is that Kate Brown became our governor three months into the term without an election. We also got a new Secretary of State in Jeanne Atkins. And those things happened because we don’t have a public records law that works.

I welcome the audit. Don’t get me wrong. I love those guys in the Audits Division. The Krispy Kreme PR department should move in on their metrics and start wheeling out stats about how many times they can encircle the Capitol with all the dollar bills they save us. Every year they should be set loose on just about everything, with public records compliance at the top of that list, as Brown is suggesting with this one-time audit. (Let’s hope someone amends her bill to make those audits annual.)

But, let’s face it, the reason both Brown and Atkins were sworn in amid talk about “public trust” and “transparency” is because they have a torch to carry. Atkins has the authority to order an audit. Brown, who just appointed her, can ask her to audit anything she wants. So what’s with the grandstanding at the Legislature?

Observers have pointed out that the audit bill buys Gov. Brown time in a moment where she’s being pressured to act. True. But if she really intends to get anything done, then she doesn’t have time. The moment in which the state of Oregon is sick over its ability to hold its own governor accountable is right now. This is the first time in years when it will be politically unfavorable to suggest that glaciers should be allowed to live and die in the timeframe that we allow public officials to turn over a couple of emails. Resource difficulties. Costs. Staffing. We have heard it. No amount of party politic and soothing is going to stand in for the fact that there was never a better moment for a governor to suggest that Oregon public records law include a deadline for response.

I know that deadline may need some flexibility. Maybe it’s just a deadline requiring agencies to simply say, “We’ve got your request. Here’s how long it will take to comply with it. Here are the ways that you could amend it to make that timeline shorter,” because, I will acknowledge, some public records requests are absurdly overbroad.

But information about questionable contracts, the kind of information that could have spared a state the resignation of a governor? Those documents need to be released without foot-dragging. And they aren’t.

“The absence of any time-limit in Oregon’s public records law is a serious problem and former Gov. Kitzhaber exploited it to great advantage last year,” Jaquiss said in an email.

What amount of chit-chat and auditing is going to erase this painful lesson?

Someday when Kate Brown is governor because she won an election, she can do all the audits she wants. But right now she is presiding over the cleanup of one of the worst transparency failures Oregon politics has seen. She needs to be the strong, capable, transparency governor that she presents herself to be. She needs to take the lead on giving us a law that works.