With focus on toxics, Duwamish cleanup could leave other health problems unsolved 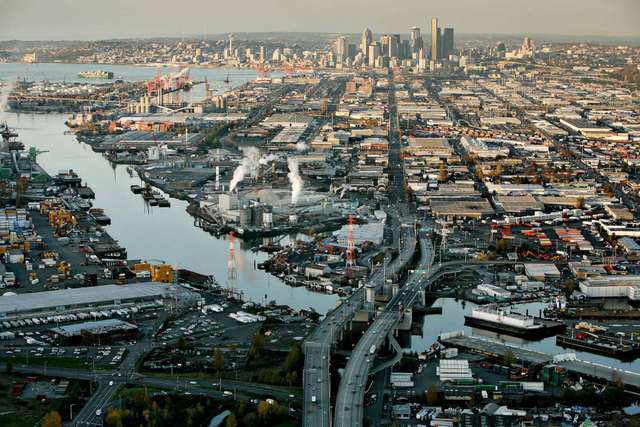 If the U.S. Environmental Protection Agency isn’t going to ensure Seattle’s Duwamish River is clean enough for needy residents to fish there for their dinner, the agency needs to ensure those people get fish some other way – even if that means supplying seafood through food banks. Or building clean urban fishing ponds. Or giving people shares in a seafood cooperative akin to a community-supported-agriculture operation.

That’s one thrust of a new report by health advocates commenting on the EPA’s proposed cleanup plan for the heavily polluted Duwamish, the first such “health impact assessment” on any Superfund site. The study also warns against potential gentrification of the riverside South Park and Georgetown neighborhoods; authors say a cleanup could hasten the already obvious demographic shift in the South Seattle neighborhoods, with wealthier and whiter residents edging out lower-income people unable to weather rising housing costs. 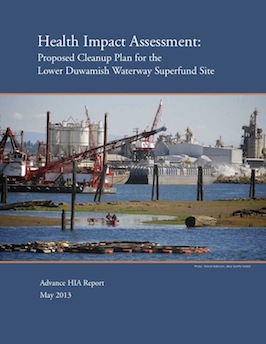 In all, the study touches on a broad array of the cleanup plan’s potential impacts, including effects on tribal identity, the labor market and family downtime.

These seemingly disparate observations and recommendations are embodied in a report released this week that challenges EPA’s traditional definition of health in past Superfund cleanups, one that focuses strongly on cancer-causing pollutants. This new study advocates adding social, cultural and even spiritual aspects of health into the mix.

The report zeros in on the four most affected populations – local residents, Indian tribes, non-tribal fishermen and local workers – to examine the potential unintended consequences of the agency’s plan on the very people it’s designed to help.

Residents are “worried that after they’ve worked so hard to clean up the river, they won’t be able to stay and enjoy the benefits,” study co-author Bill Daniell told the Seattle City Council during a presentation Monday.

Conducted by the University of Washington School of Public Health, Just Health Action, and the Duwamish River Cleanup Coalition/Technical Advisory Group, the study is the first of its kind. Sponsors The Robert Wood Johnson Foundation and The Pew Charitable Trust fund such studies for other types of projects, but told the report’s authors that this is the first such assessment to be applied a Superfund cleanup plan, said co-author BJ Cummings.

The report is an advance version of a final draft that will be released in time to meet EPA’s June 13 deadline for public comment on the agency’s proposed cleanup plan.

Reaction to the new report was muted. The Port of Seattle, one of four major Duwamish landholders responsible for cleanup, issued a statement saying the Port is concerned about people’s health. At the agency to which the study is directed, EPA, spokeswoman Hanady Kader said late Tuesday the agency still was studying the 23-page document released Monday morning.

However, a document issued by the EPA itself just three months ago echoes sentiments in the health advocates’ report of this week, saying EPA’s plan would “place the burden of addressing environmental contamination’s health effects on those affected, rather than those responsible for the risk.”

The Duwamish, a narrow band of water cutting through Seattle’s industrial core, was the collection point for a century’s worth of pollution. The cocktail of contaminants that gathered in the sediment grew so toxic that in 2001 the EPA designated a 5.5 mile-stretch of river a Superfund site, meaning it’s one of the nation’s worst toxic messes.

The EPA’s 109-page proposed cleanup plan outlines a seven-year remedy of active dredging, capping and other recovery tactics to reduce pollution levels. After that, the agency envisions monitoring pollution levels for 10 years. What happens then is an open question. Health advocates ask: Will the contaminant levels be low enough to allow much fishing, or will taking fish from the river remain restricted for decades to come?

The risks of eating Duwamish catch – and the drawbacks of not – are a central issue in the health advocates’ report. Even though the EPA posts no-fishing signs and issues warnings against eating almost any Duwamish seafood, both tribal and non-tribal anglers continue to feed themselves and their families from the river. The report quotes one tribal elder as saying, “It’s our spiritual food so it feeds our soul; so it might poison our bodies, but then we’d rather nourish our souls.”

Based on this, the study recommends EPA actively promote alternate food sources rather than merely posting no-fishing signs.  Urban ponds, stocking food banks with seafood, and encouraging community-supported-agriculture-like fish cooperatives are among the proposals directed toward the EPA.

For the nearby Duwamish, Suquamish and Muckleshoot tribes, the report points out that fishing restrictions violate their rights to fish under treaties that allowed settlement of the Puget Sound region. This limits access to both a dietary and cultural resource, and advocates fear that restrictions could last far beyond the 17 years the cleanup plan already accounts for. The study recommends establishing a tribal revitalization fund to offset the negative health impacts during the cleanup, such as building a salmon hatchery to increase fish stocks.

“The EPA should step back and take up some of that burden from people who are hurt,” said study co-author Linn Gould.

The people who live in the two neighborhoods on the banks of the Duwamish, South Park and Georgetown, have traditionally been working class and much more likely than Seattle’s population as a whole to be immigrants or members of minority groups. Potential negative impacts for these riverside communities include gentrification, construction-related air and noise pollution, increased traffic and spread of contamination, the report says. Of these, study authors say gentrification is the trickiest to handle.

The study found that, under the EPA’s proposal, a cleaner Duwamish is likely to displace residents into lower-cost areas, a move that may decrease those people’s access to healthy food, quality schools and supportive social networks.

While most of the recommendations in the report are made to the EPA, the authors directed their recommendations on gentrification to the City of Seattle and King County. Among the suggestions are to hold down housing prices through land use codes and tax incentives and to encourage home ownership through down-payment assistance. It suggests shoring up tax-deferral, -exemption and -relief programs for those residents who might face tax liability because of increased housing prices.

When I look at this report, I feel like we’re on this rational path to failing these communities.Councilmember Mike O’Brien
May 13, 2013

While this advance report focused on tribes, non-tribal fishing populations and local residents, the final report also will include the impacts on local industrial workers. Authors say that while the cleanup could revitalize local business, it could also place negative pressure on local manufacturers and result in job loss. The current report gives little detail on what those potential negative pressures might be.

During the authors’ presentation to the Seattle City Council on Monday, council members asked questions about the threshold for gentrification and when locals might be able to fish again. When Daniell replied that no-fishing restrictions could last indefinitely, council members cracked jokes about the worthiness of cleaning up the Duwamish at all.

Despite the levity, council members were clearly concerned. Although the new report lists possible positive outcomes of the EPA’s plan, council member Mike O’Brien said that the many negative impacts placed the cleanup in a new light.

“When I look at this report, I feel like we’re on this rational path to failing these communities,” O’Brien said.