The Society of Professional Journalists announced on Wednesday that Carol Smith and Lewis Kamb are recipients of the 2013 New America Award, which recognizes reporting on issues of importance to immigrant or ethnic communities in the U.S.

The News Tribune’s Kamb and InvestigateWest’s Smith won for “Center of Detention,” an investigation into Tacoma’s Northwest Detention Center. Both are co-founders of InvestigateWest.

“We’re extremely pleased to see The News Tribune and InvestigateWest share honors on this important project,” said Robert McClure, executive director of InvestigateWest. The collaboration was the first ever by The News Tribune with a nonprofit news organization. “As Congress debates how to step forward on immigration reform, we’re gratified that SPJ recognized this extraordinary effort,” McClure said.

From the SPJ announcement:

The entry, “Center of Detention,” tells the story of how a Tacoma, Wash., detention center worked alongside local politicians to expand the facility on top of a hazardous field prone to natural disasters. Information obtained through public records and government officials, as well as perspectives of immigrants in the center, explains the intricacies of laws and policies surrounding the immigration detention system.

“This report was so well done, a movie or documentary could be made based on this work,” said Sandra Gonzalez, a judge for the New America award. “It was so thorough and carefully woven together between Oscar and the center, from his arrival, to the center’s plan to its growth. I kept wanting to read more. I loved how the two were told in parallel timelines.”

The five-part investigation was also recognized recently by the Western Washington chapter of SPJ, placing first at Saturday night’s Northwest Excellence in Journalism awards dinner in the investigative journalism by a large newspaper category. At the same event, Kamb was honored as Journalist of the Year.

“Center of Detention” is available for download on Amazon. 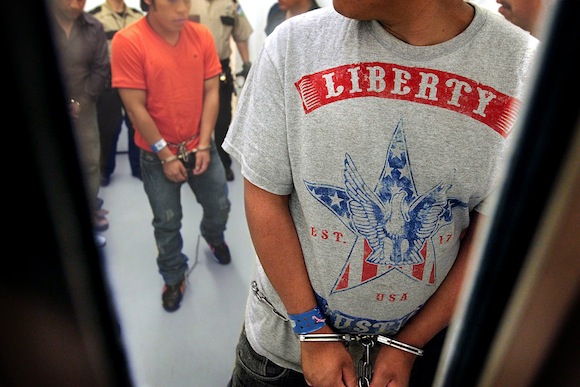