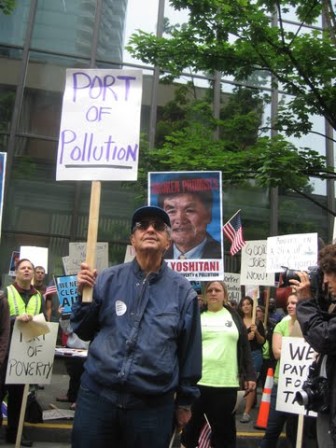 Against the backdrop of a towering asthma-medicine inhaler, about 250 protesters demonstrated downtown on Thursday*, saying the Port of Seattle should do a better job of cleaning up air pollution, taking care of its low-level employees and reining in the six-figure salaries of its executives.

The protest outside a meeting of the American Association of Port Authorities targeted in particular Port of Seattle CEO Tay Yoshitani’s 9 percent pay raise earlier this year that gave him a salary more than twice that of Gov. Chris Gregoire – as state employees saw their paychecks dip 3 percent. Yoshitani makes $366,825 a year.

Hudgins, D-Seattle, said he will file legislation that would:

Hudgins filed versions of those measures in 2007 and 2008, but they did not pass.

Port of Seattle spokesman Peter McGraw said the port had no comment on the proposed legislation, but he defended Yoshitani’s raise, writing in an email:

“CEO Yoshitani oversees an organization that includes the nation’s sixth largest seaport, 17th largest airport, a diverse real estate portfolio, and an annual budget of over $500 million…  It is a difficult job, and the right education and experience to lead the port is not an easy combination to find.  Tay has it, and in part because of his steady leadership, the port is in the black at a time when many other agencies are not. “ 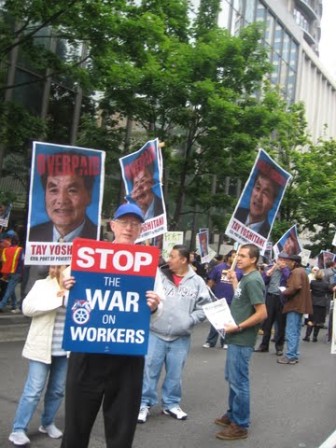 Among the port workers who took the stage to decry their working conditions were about a dozen drivers of the short-haul trucks that take cargo from the port to railyards and other destinations around town.

The drivers, who in some cases earn the equivalent of less than minimum wage, said there is a fatal flaw in the port’s plan to clean up air pollution: It involves relying on them to purchase more-modern, less-polluting trucks as of the end of 2015. That’s simply not possible, drivers said, when many are earning $30,000 a year or less, and the newer trucks produced since 2006 sell for more than $100,000.

“I guess we’re going to be unemployed. We need help,” said an orange-vested driver named Jose whose last name was unavailable.

The port, McGraw says, is trying hard to work with drivers. He produced a list of more than 120 meetings port staffers have arranged since May 2007 to discuss the port’s air-pollution-cleanup plans. Many involved truckers; others included meetings with community and environmental groups, businesses and business groups, and ports and other governmental agencies.

The South Park and Georgetown neighborhoods, near the port, show the highest incidence of hospitalization of children for asthma in King County. Activists blame truck traffic from the port. But no definitive study has been done to determine where pollutants are coming from that boost South Seattle’s air pollution to levels that exceed regulatory caution levels by up to 30 times, according to one government study. Nor has there been a comprehensive look at how air pollution is affecting area residents.