When Seattle was planning its first extreme-green makeover of a city block, residents competed for the honor. And in 1999, the winning street in the Broadview neighborhood got a gorgeous facelift complete with new sidewalks and verdant roadside rain gardens with shrubs and grasses.

But when the city recently tried going green in the Ballard neighborhood, homeowners there felt like they got stuck with the booby prize.

The rain gardens installed by the city last summer and fall haven’t worked as planned. The gardens, which look sort of like shallow, sparsely-planted ditches running between the road and sidewalk, fill with water – and stay filled up. Some of the rain gardens drain over the course of hours or days, but some become mini ponds until the city comes to pump out the water.

Many of the residents are not pleased. They worry that the swamped gardens are a drowning hazard for young children, a breeding ground for mosquitoes, and will lower their property values. There’s even a neighborhood blog calling for their removal.

“We feel badly,” said Nancy Ahern, deputy director for utility-systems management for Seattle Public Utilities, the department that installed the rain gardens. “It’s been hard on this community.”

More is at stake than the ire of angry residents. Seattle, like metropolitan areas nationwide, has a century-old legacy of streets, driveways, parking lots and roof tops that create massive volumes of runoff. Rain gardens are a key technology for curbing stormwater, which can trigger overflows of raw sewage, trash salmon streams with torrents of water, or scoop up and dump millions of pounds of toxic pollutants into Puget Sound, Lake Washington, the Columbia and Willamette rivers and beyond. Scientists say that controlling these flood waves of stormwater is essential to recovering salmon and cleaning up the environment.

And so cities and counties nationwide have been eager to install rain gardens, which are viewed as environmentally friendly and often less expensive than traditional stormwater solutions that rely on pipes and drains.

This week, Washington State University and the nonprofit Stewardship Partners launched the 12,000 Rain Gardens campaign with the goal of getting 12,000 of the stormwater gardens installed in the Puget Sound region by 2016. Along with Seattle, Portland has committed to the widespread installation of rain gardens, and smaller cities including Puyallup and Lacey are promoting their use. The Washington Department of Ecology is working on an update of state requirements spelling out when and how rain gardens and other green stormwater technologies – also called low-impact development – must be used.

But Ballard’s rain garden fiasco is a very visible reminder that green solutions aren’t always quick, easy and predictable. The project offers a cautionary tale to be heeded nationwide: rain gardens have limitations.

“Low-impact development technologies are very site specific,” said Art Castle, interim executive vice president at the Building Industry Association of Washington, an organization representing the housing industry. Castle, who served on an advisory committee that helped the state craft its low-impact development rules, says he believes rain gardens work, but worries about mandates for their use.

The Ballard rain gardens were meant to specifically help with the problem of sewage spills triggered by heavy rainfalls. Seattle is planning to spend $500 million over the next 14 years to reduce the sewage overflows by repairing the existing system, building large storage systems to handle the stormwater runoff and installing green infrastructure. Portland has spent $1.4 billion on the “Big Pipe” projects to curb its storm-sewer problems through more conventional means, in combination with greener solutions. Port Angeles is working on plans for a $40 million fix to its overflows with new sewage lines and a storage tank.

The combined sewer overflows – also called CSOs – can contaminate lakes and bays with disease-causing pests including salmonella bacteria, the parasite giardia and Norwalk-like viruses. People can get sick by inhaling small droplets of the polluted water, or through contact with skin, eyes, ears, and cuts. Exposure can cause diarrhea, vomiting, stomach cramps, fever, hepatitis, bronchitis, pneumonia and swimmers itch.

The hope was that the Ballard rain gardens would provide a more natural, less expensive alternative to the costly traditional fixes to the overflows. The idea was that the rain gardens would soak up the stormwater runoff, instead of piping the water into the sewer system, which can be overwhelmed during rainstorms. The $1.9 million pilot project was meant to be a model for future Seattle projects, as well as other cities and counties.

Despite the problems, the green dream is not dead. The city and even some of the Ballard residents remain committed to finding an eco-fix.

“It’s a misstep,” said Ray Hoffman, director of SPU, of the Ballard pilot project. “But it’s not swaying us from our belief that in a lot of places, environmentally and economically, (green infrastructure) is the best investment to make.”

West Seattle’s High Point is an emerald jewel in Seattle’s green infrastructure crown. Block after block of the low-income housing development is lined with rain gardens that capture rainwater runoff that gushes off the roadways and roofs.

Some of the gardens are nearly a foot deep. The sloping ditches are planted with red-twig dogwood and huckleberry bushes, grasses and sedges – all plants that don’t mind soggy soil. The rainwater soaks into the ground rather than flowing into the city’s stormwater or sewer system. As it soaks, oil and grease, pesticides and other pollutants are filtered out and often gobbled up by organisms in the soil.

Seattle Public Utilities was the driving force behind the High Point gardens, which are a poster child for how attractive green infrastructure can be. Just hours after a gully-washer, the rain gardens are hardly wet.

Sian Cullen, who lives outside of High Point, maps her jogging route through the development and along the rain gardens.

“I love them,” she said, pausing mid run on a recent afternoon. “I always admire them.”

So why are so many of the Ballard rain gardens a muddy mess?

The city had been planning to test green infrastructure to handle storm-sewer overflows. But when the government offered federal stimulus money in 2009 for “shovel ready” projects, SPU had to fast-track the Ballard pilot project in order to get $1.4 million in federal grants and loans.

Normally SPU would have done winter monitoring to understand how wet the ground would get and how water moved through it. They would have done an intensive outreach to make sure nearby residents understood and were on board with the project.

In Ballard, they cut corners. Test pits were dug at 19 sites to measure how fast the water would drain, but and other monitoring was done, but it wasn’t enough. That meant a serious problem went undiscovered: the presence of underground spring water and shallow groundwater. Some of the more than 90 rain gardens are actually tapping this water, and adding it to the rain runoff to create continually soggy ponds. Additionally, there was more fine-grained soil that does a poor job soaking up water.

“These (rain gardens) are like bathtubs without a drain,” said Karrie Mathison, who is among the residents who want the rain gardens removed. “It seems very clear to us that these won’t work in the area. I wish they had worked. We have to have green solutions, we absolutely need them.” 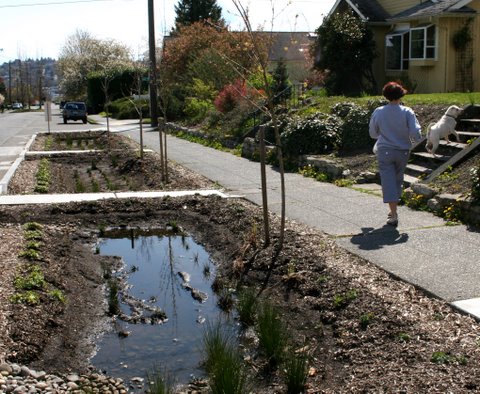 A neighborhood resident dogwalking along 28th Avenue north of 71st Street in Ballard. Residents complain about the stagnant water. Photo by Rita Hibbard/InvestigateWest

Mathison is among 13 city residents on a task force working to come up with solutions for the rain gardens problem.

SPU has proposed four alternatives for the group to consider: removing some of the rain gardens; installing drains in some so the water enters the storm-sewer system more slowly in order to prevent sewage overflows; modifying some gardens to reduce the pooled water by adding large rocks and plants; and making limited modifications to the rain gardens that are performing the best.

The repairs are expected to cost about $500,000, bringing the project’s bill to $1 million for Seattle, plus the federal stimulus dollars.

Originally, the Ballard rain gardens were expected to soak up 50,000 gallons of rainwater runoff a year.  That stormwater might otherwise flood the sewer system and triggered pollution overflows into the Ship Canal. In recent years, between 60,000 and 43.2 million gallons of sewage and stormwater have spewed from the overflows that the Ballard gardens were meant to help. The city hasn’t monitored the gardens to determine how much water is being absorbed, but the proposed corrections mean less water will be diverted from the sewer system.

SPU is hiring a firm to test some of the rain gardens to better understand how well they’ll drain. The goal is to begin making the fixes in May and have the work done by fall.

Green infrastructure experts say that even though the soil in Ballard is often composed of clay and dense earth called “glacial till” that’s tricky to work with, there are solutions.

“They are tough soils,” said Curtis Hinman, director of WSU’s Low Impact Development Research Program in Puyallup. “But we have (rain garden) systems that are working well on tough soils.”

Michelle Arab, a task force member who lives on 28th Avenue NW and who is also a landscape architect, is helping craft more attractive designs for the gardens, which were criticized for being ugly and too utilitarian. She hopes they’ll work out in the end.

“I would love for them to continue up the street,” Arab said.

The city is required by the U.S. Environmental Protection Agency to dramatically cut its sewage overflows by 2025. SPU would like to incorporate rain gardens as part of its solution in neighborhoods including Ravenna/Bryant and Montlake. King County is also interested in green infrastructure, and Portland has embraced rain gardens to compliment its investments in traditional “gray” infrastructure to solve its combined sewer overflow problems.

Outside of the Northwest, cities including Philadelphia, Kansas City, Mo., New York and Washington, D.C., are testing or proposing using greener strategies to handle sewage overflows.

“This is what we need to do,” SPU’s Hoffman said. “We need to make the urban landscape function like it wasn’t urban.

“The story that’s playing out here,” he said, “is being replicated across the country.”

InvestigateWest is a nonprofit investigative journalism center based in Seattle. For information on how you can support independent investigative reporting for the common good, go to invw.org.