Internships at InvestigateWest are not the coffee-fetching, errand-running type. In fact, as an intern, I recently learned that you may even be confused with a threat to homeland security.

As an InvestigateWest intern living in Bellingham, I was the natural choice for the Seattle-based news agency to visit the ConocoPhillips refinery near Bellingham to gather descriptive color and take photos from outside the facility’s fence. The story was about the refinery’s use of hydrofluoric acid, which has the potential to harm thousands of people if it leaks. IWest environment correspondent Robert McClure warned me that, because of a post-9/11 crackdown on anyone taking pictures near refineries, dams, bridges and other potential targets of terrorists, I might be questioned at the refinery. I understood this could be a possibility, but thought the workers there would most likely not acknowledge me. Turns out, Robert was right.

When I first arrived, I drove around to one of the far corners – making observations and jotting down notes along the way. After I had written down a thorough description, I stepped out of my truck and started taking photos of the refinery. Soon after my first pictures, a white Ford Escape quickly appeared. A security guard hopped out and said, “You aren’t allowed to take pictures here, it’s a federal offense.”

I told him I was on a public street and have a right to take pictures from where I was. He repeated himself and radioed the make, model and license plate number of my truck. A woman’s voice responded, “Is he still taking pictures?” I was. The guard said the refinery manager was coming out to speak to me and that they would call the sheriff and confiscate my pictures. Within a minute or two, two men arrived in a white Saturn. They asked me what I was doing and I explained. 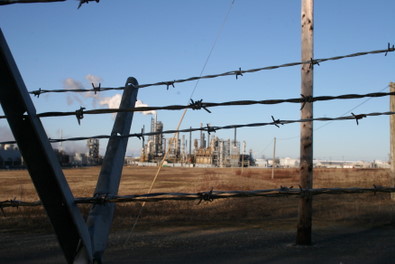 One of them said, “What you’re doing is making us nervous,” adding, “It’s a Homeland Security issue.”

I offered to show them emails between Robert and I about the story to prove I was not a threat. They declined. I asked them if where I was standing was a public street and they said yes. I asked, “If I stay on the street I can take pictures, right?” They didn’t answer. They reverted back to their first answer four or five times in various forms, using words like terrorism and terrorists, before the conversation ended in awkward silence.

They left me there and I continued to shoot photos. I drove to a few more spots, took more pictures, and headed toward the main road. I remembered a beach just down the road from the refinery where I had seen oil tankers anchored before. I thought it would be great to photograph an oil tanker just off the shoreline. There was no tanker.

So I turned around ready to head home and saw the original security car behind me. As I continued to exit, I noticed he wasn’t alone; there was another white vehicle from the refinery behind him. They pulled over, and I drove past them. I watched them turn around and follow me out to the main road. After about a mile, I saw they were no longer following me. I thought their stalking was excessive and unwarranted; I had never attempted to trespass or do anything else threatening.

Bear in mind that the story I was working on originated at the Center for Public Integrity, whose reporters had to go to get special permission just to look at government records outlining how dangerous a hydrofluoric acid leak or spill could be at this refinery and 49 others using the caustic acid. They were not allowed to photocopy the records but had to take notes by hand, Robert had to do the same thing for a 50-page document the refinery filed with the U.S. Environmental Protection Agency in Seattle. And now, as I exercised my First Amendment rights, ConocoPhillips was trying hard to shield itself from public exposure.

And they had some help – from the local constabulary. I was about a half a mile from the freeway when I saw a sheriff’s deputy driving in the opposite direction. Instinctively, I tapped the brakes and made sure I wasn’t speeding. I wasn’t, but I watched anyway. After he passed me, he made a U-turn, flipped his lights on, sped around the car behind me and pulled me over.

I rolled down my passenger-side window as he approached. “I stopped you because I got a call from the refinery that you were out there taking pictures,” he said.

He asked me why I was taking pictures and I explained the story I was working on and why I needed the pictures. He asked me for my driver’s license, went to his car, came back and said, “Well, you look pretty normal to me.” I was free to go.

Will Graff, a senior in the Western Washington University Journalism Department, is interning at InvestigateWest. Graff, 23, grew up in Vancouver, Wash., and was inspired to go into journalism by reading the muckraking books of Upton Sinclairand Lincoln Steffens.