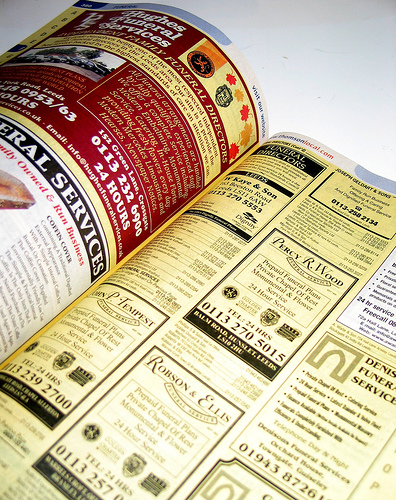 Seattle could become the first major city in the nation to stop the yearly delivery of phone books to residents.

Members of the city council at a Public Utilities and Neighborhood Committee hearing Tuesday showed interest in exploring different options to cut back on the delivery of phone books to homes that don’t use them.

Members of Zero Waste Seattle, a nonprofit group spearheading the effort, testified that  in today's digital age most people no longer use a phone book to find a business’ contact information.

Directories and phone books pile up, untouched outside apartment complexes and homes, Zero Waste said. Seattle added 2, 231 tons of phone books into the recycling stream in 2005.

“We don't use [phone books], we go online to find what we need,” said college student and ballard resident Ursula Sandstrom.

Only residents who sign up for phone books should receive them, Zero Waste Seattle says, and members said most people who stopped by the group's booth at the Fremont Fair last weekend agreed.

“Were are making sure we know what the city of Seattle wants on this, which is ultimately a chance to opt-in,” said Justin Rolfe-Redding, of Zero Waste. “We see it as a no-tresspasing sign for phone book companies.”

The council is considering contracting with Catalogue Choice, a nonprofit group, to help people get out of receiving an annual phone book. The city website would link to Catalogue Choice, where residents could sign up to discontinue phone book deliveries. This option would cost about about $30,500 next year, according to Seattle Public Utilities.

Phone book companies like Dex already allow individuals to sign up online to stop or restrict their phone book deliveries. Through it’s “Select Your Dex” program, people can limit which directories and promotional mail items they receive.

Amy Healy, a representative of the Yellow Pages Association, told The Seattle Times the industry recognizes some people don’t use phone books. She said companies are working to stop making unwanted deliveries.

“As an industry, we absolutely support consumer choice. It makes no sense for a directory publisher to provide a product that the customer doesn't want," she said.

Residents who testified at the public hearing, however, said they still receive directories, even after using the phone book companies opt-out online forms.

“We think in Seattle, the majority of people don't want a phone book,” said Heather Trim, a member of Zero Waste Seattle. “The idea is to go with an option that gives citizens what they want, which is to stop the these unwanted deliveries.”

Council President Richard Conlin said he was interested in pursuing an opt-in program in the future.