Oregon Congressman Greg Walden is drawing the ire of net neutrality proponents for opposing FCC consumer protections while receiving contributions from big telecommunications companies. But the story isn’t quite as black and white as you might think.

Oregon’s bedbug secrecy law — who are we protecting?

A quick update on records reform from Oregon’s top watchdogs

As we enter the last month of legislative debate, here’s how public records reform in Oregon is looking, so far, from the vantage of the watchdog press.

Oregon should not turn back to an era of default privacy

Pete Shepherd is a firm believer that nondisclosure can be in the public interest. He has been at the center of Oregon transparency discussions for decades. So who is he?

Well, we’ve finally arrived. Transparency season in the Oregon Legislature. Hard to know where it all will lead, but the fact that we got here – and with more proposals in favor of transparency than against it – is at least a good sign for Oregon. Here’s my summary of what’s on the menu, along with the state of the union for each proposal:
Senate Bill 481: This is the offspring of the Attorney General’s Public Records Task Force. It’s potentially the heaviest hitting piece of legislation on the table.

Is it a business to report on racial disparities?

It cost $2,400 to buy the Unequal Justice series. That’s not pay for the reporters or photographers. That’s not the cost of editing and distributing the work, either. That’s just the cost to buy the story from the Oregon Judicial Department, which controls the bulk data that underpins the Oregon eCourt Case Information – the database a reporter analyzed to uncover the disparities reported in the series. It’s also something for which the Oregon Judicial Department charges money.

An upbeat recap on a not-so-bad year

Does the MERS lawsuit signal a transparency gap?

The fourth estate and the marginally powerful clash, Oregon-style 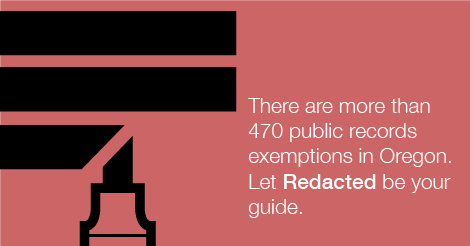