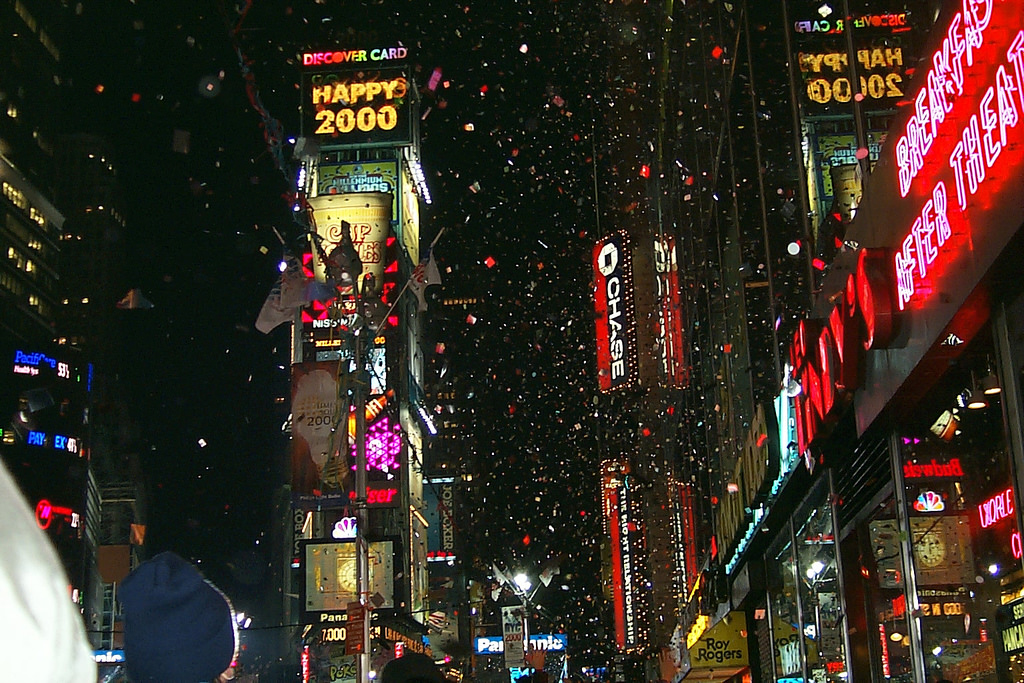 If not for Y2K, the Oregon Department of Transportation might still offer fee waivers on public records. But instead of waivers, all we get now is an opportunity to re-examine a 16-year-old decision by the attorney general’s office. It’s a decision ODOT officials now say forces them to charge fees.

To get into this scenario, let’s fast-forward from partying like it’s 1999 to the present. Past Y2K and the apocalyptic predictions of what would happen to the digital universe in a new millennium. And to the desk of Kevin Harden, the current digital media editor at The Portland Tribune, who in early August dispatched an email requesting records from the Department of Motor Vehicles, which is housed within ODOT.

This was just another day of reporting for the document-savvy Harden. He has a knack for bringing national issues into local focus for the Pamplin Media newspapers, for which he’s long been a reporter and editor.

What Harden sought from DMV was not particularly earth-shattering. He just wanted to know what local Volkswagen drivers planned to do about the company’s multi-billion settlement with consumers. As the result of the June 28 settlement over VW’s unfortunate bait-and-switch on emissions, 475,000 drivers are now eligible for lease termination or buybacks. As The New York Times reported, the largest percentage of those drivers are in Oregon. Harden and colleague Paris Achen took the lead in distilling the situation for the Tribune’s readers. Then Harden took the story a step further.

“I thought, ‘Well I’d like to talk to some owners of some of these vehicles and see what they’re going to do,’” he said.

To contact the owners of VW’s, Harden emailed DMV and requested contact information for 14,000 registered owners of Volkswagens. Such errands are the meat and potatoes of journalism. Run-of-the-mill records requests that simply get the job done. Harden knew that direct contact with the owners would not only give him insight into the inevitably sticky road to claiming rebates and wiggling out of leases. But that regular contact with those drivers would also help him spot problems – and report on solutions – if the rebate process breaks down or it proves difficult to cancel leases after all.

There is still an opening for fee waivers for public records. A duo of reporters from The Oregonian found it in 2000. Right after Y2K dominated the hearts, minds, and budgets of public servants the world over.

Harden didn’t get the records though – not yet. Instead he got a bill, which is typical in Oregon. There are no limits on fees for public records. And Oregon Public Records Law states only that government agencies are allowed to recover the “actual cost” of fulfilling the requests. So Harden was charged $126.52. True, it’s not a make-or-break amount of money, even for a newspaper. But looking at the details, the fee included a charge of $1.10 per second for computer computational time plus 20 minutes of staff time, billed at $50 an hour.

If you read the fine print on these things like I do, then you know that this is ridiculous. If the “actual” per-second cost of using a computer were really $1.10 cents per second, then DMV expects its computers – which let’s say cost them $2,500 each, to be generous – to have a lifespan of 37 hours.[1] (And yes, I am assuming the cost of electricity is negligible.) Also, nobody at DMV is getting paid $50 an hour to process public record requests. I checked. Only four engineers make $104,000 a year or more within all of ODOT. Another 99 managers make upwards of that amount. (Yes, that’s a real number. Read it and weep.) But none of those managers are union employees. And because we know that public records requests are typically processed by union employees – that’s clear at the Legislature, where they often turn up to testify about changes in the law – we know this isn’t the actual cost of the labor related to Harden’s request.

Translation? None of this is defensible as “actual costs” incurred by Harden’s request under Oregon Public Records Law.

But what’s more important is what happened next. Harden asked DMV for a fee waiver. Oregon Public Records Law makes clear that public agencies can waive fees for records if the request is in the public interest.[2] Harden believed his was. He was, after all, just trying to find out how the settlement process was going for thousands of consumers who had been ripped off by Volkswagen. He was denied, however – unsurprising in an era of de-facto exemptions and obstructive fees. But the reason for the denial was a surprise: DMV doesn’t grant fee waivers. In fact, they’re prohibited from doing so.

Thus, our question today is whether that’s really true.

There are a handful of court decisions and Attorney General opinions that led to us to this place. Attorney General James Redden’s administration decided in 1978 that if funding for a particular department – like ODOT – derived from funds that are statutorily or otherwise legally dedicated to things like roads, the department can’t waive fees for records. Doing so would constitute an illegal diversion of the funds.[3] And because most of ODOT’s money derives from the Highway Fund, which is fueled by taxes on cars and fuel, it’s understood that ODOT is robbing the highways if it gives people freebies on collecting public records.

The Oregon Constitution inked this long before Redden, clarifying that Highway Fund revenues “shall be used exclusively for the construction, reconstruction, improvement, repair, maintenance, operation and use of public highways, roads, streets and roadside rest areas in this state.”[4] And while the constitution lumped administrative costs in as well, courts have since construed them narrowly enough that the Highway Fund can’t even pay for sidewalks adjacent to state roads.

But there is still an opening for fee waivers for public records. A duo of reporters from The Oregonian found it in 2000. Right after Y2K dominated the hearts, minds, and budgets of public servants the world over.

Many of us remember the hysteria. Computers everywhere were predicted to be disrupted by the turn of the calendar year from 1999 to 2000. Because most computer programs only read the last two digits of the date, nobody knew whether the electronic sky would fall when the world’s digital operations zeroed out. Preppers everywhere kicked up business for survivalist boot camps and the freeze-dried dinners. Responding to the possibility of electrical grid collapse, fritzed out communications, and overall digital mayhem, governments everywhere made contingency plans, some enormously costly.

When the disaster never happened, reporters Steve Mayes and Steve Suo of The Oregonian made records requests intended to sleuth out exactly how much money ODOT had spent in preparation for the non-problem. In February 2000, they asked the agency for the contracts made with Y2K prep services, a list of those contractors’ qualifications, their expense accounts, pre-award reviews of the contracts, compliance audits related to the work, and a report of similar work performed by ODOT staff. It sounds like a lot. But when you think about it, the question at the root of all this was a good one: How many contract and staff efforts should ODOT have funded to fix a problem that never was?

The response the Steves got, however, was an estimate of $11,119.30 to produce the records. They logically requested a fee waiver, and appealed to the attorney general’s office when they didn’t get one. It was this appeal that produced the public records order ODOT now uses as a backstop against ever waiving records fees. Yet looking closely at it, the ruling doesn’t support a permanent ban.

Here’s why: while the ruling runs through the usual legal arguments regarding restricted Highway Funds, and spends an entire page-and-a-half detailing the precarious, Jenga-like nature of ODOT’s budget, it did find that ODOT has some amount of unrestricted funding – money that comes from state general funds and other, unrestricted sources. The Steves were eligible for a fee waiver from those funds, it turns out. They were denied anyway. And the heart of that denial rested on a wondrous quote from the House Floor from the era in which fee waivers were set to law – back in 1989. Though the statement smacks of the kind of anti-press sentiment that has no place in a public balancing test, we’ll ignore that. Let’s just read the quote itself.

“Frankly, some of the media representatives would like to have as much documentation as they’d think about asking for provided to them for nothing. It is not the intention of this bill that should be the case. It does have in there about the ability of the agency to provide for the public good. There was some discussion about the possibility of putting things like students and authors and so forth in there and we did not do that. This is strictly up to the discretion of the agency but at the same time it is also understood that the agencies will not gouge people with multiples of their actual costs. But I think it is important to just make it clear on the record that this does not give commercial organizations, of which the news media are a part of that class, the ability to go in and ask for anything they want and have it all given to them for absolutely nothing.”

There it is in black and white: “…at the same time it is also understood that the agencies will not gouge people with multiples of their actual costs.” It was Representative Ted Calouri, a Republican from Beaverton, who argued this. And I suppose he didn’t know that courts have made a distinction between newsgathering and commercial endeavors. Or imagine an era in which some media types stopped being viable as commercial enterprises, let alone that nonprofit news shops like InvestigateWest would pop up by the hundred, and that public records would become a revenue generating tool for public agencies. But indeed they have. And those things now being true, the Harden request should qualify for a fee waiver.

Because $1.21 per second of using a computer is clearly a “multiple of… actual cost,” as is a per-hour labor fee that exceeds the pay of the person performing the labor. With that in mind, the Oregon Attorney General should revise its prior decision on appeal. The 2000 ruling doesn’t apply in an era in which public agencies are gouging the public. And ODOT officials should be prevented from pretending they have the legal authority to do it.

[1] Aside the fact that’s less than a week of electronic pencil pushing, just the idea of trying to recover actual costs of computational time is absurd. Imagine this flying in the private sector: a depreciation tax for every second you spend at the cash register at the Fred Meyer. One might say, “I paid for that with the cost of my groceries, didn’t I?” Yes. Yes, you did.

[2] State agencies can waive fees for public records when “making the record available primarily benefits the general public” under ORS 192.440(4).