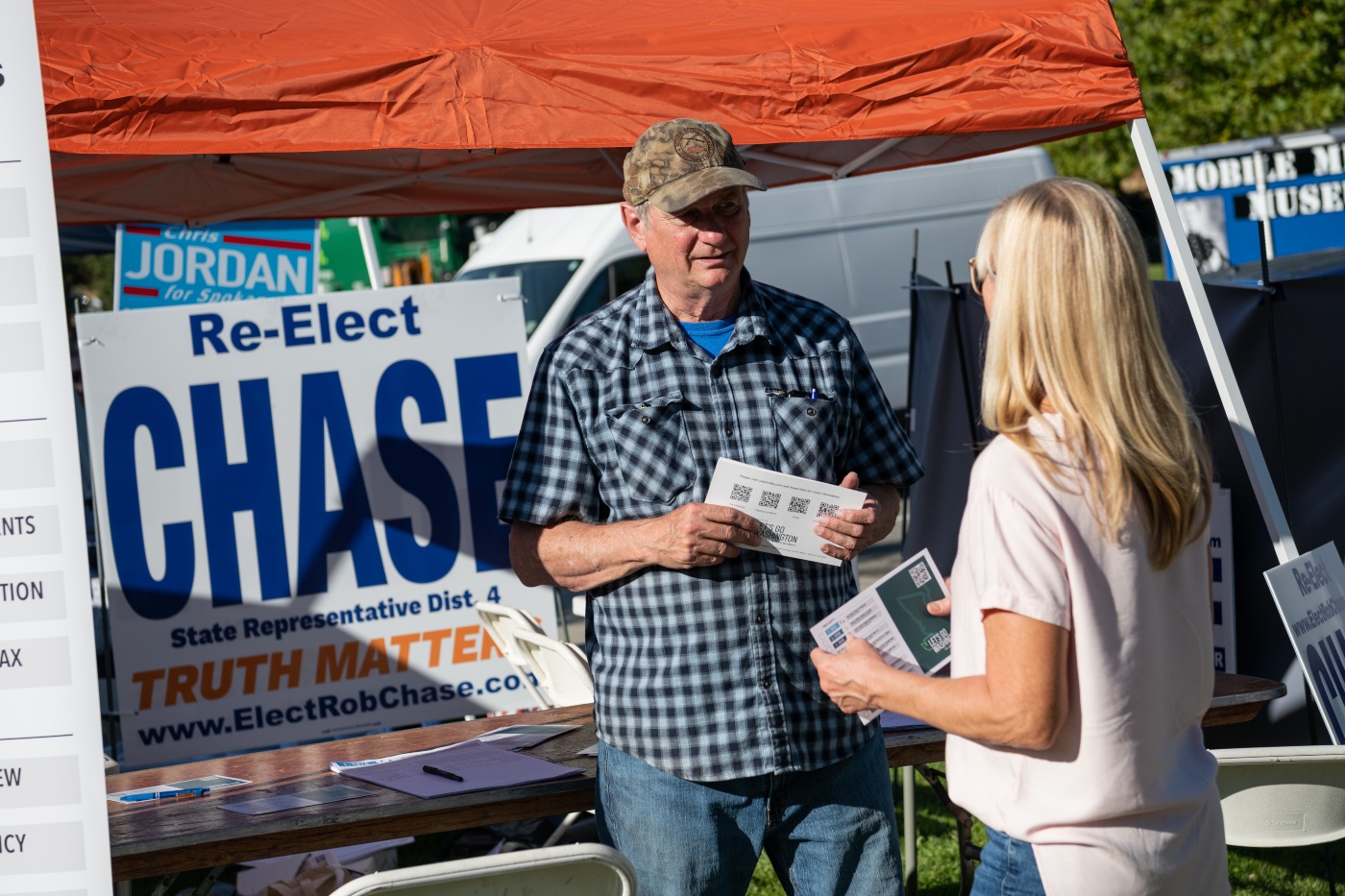 WA state Rep. Rob Chase was recruited by Shea who was linked to domestic terrorism

When Rob Chase vied for a seat in the Washington Legislature two years ago, voters knew he promoted far-right conspiracies.

On social media and in interviews, Chase promoted QAnon, spread COVID-19 misinformation and questioned who carried out the 9/11 attacks. He was recruited to run by his friend and ideological ally, then-embattled former Rep. Matt Shea. In 2020, Shea declined to run for re-election shortly after an independent report accused him of participating in domestic terrorism by helping to plan the armed occupation of the Malheur National Wildlife Refuge in Oregon.

Chase won the election handily in the deep red Spokane Valley district. And this fall, Chase is vying for re-election, once again advancing a widely debunked conspiracy theory. This time, the conspiracy is one more widely accepted within the GOP: that the 2020 presidential election was stolen from Donald Trump.

As Chase’s platform has been elevated in the state Legislature, extremism experts say he’s emerged as a dangerous far-right figure. He’s leading a push among Washington state lawmakers to question the legitimacy of the elections process, and he’s kept the central tenets of Shea’s far-right ideology — like splitting Washington into two states — alive.

In an interview with InvestigateWest, Chase rejects being cast as fringe or threatening, saying he’d have been considered “mainstream” 50 years ago. He defended his promotion of election fraud theories, COVID-19 conspiracies and QAnon.

“You should be able to read whatever you want without being chastised for it,” Chase said.

Unlike Shea, Chase doesn’t shy away from the media. His diplomatic demeanor stands in stark contrast to Shea’s fiery rhetoric and verbal attacks of journalists.

But that’s precisely why Chase may be a more effective messenger of misinformation and far-right ideology, said Devin Burghart, executive director of the Institute for Research and Education on Human Rights, a Seattle-based nonprofit.

“I think they’re equally dangerous,” said Burghart. “I think that Shea is more adept at stirring up the base, whereas Chase is a better vehicle for moving far-right ideas from the margins into the mainstream.”

Last fall, hundreds packed into an event center in Post Falls, Idaho, just across the Washington state border from the district that Chase represents. They had turned out to see three speakers who traveled from across the country to explain their widely debunked theories about how the presidential election was stolen.

Chase, who helped organize the event and invite the speakers, took the mic first.

“How does a guy get 12 million more votes than he did the time before and still lose to a guy who never left his basement?” Chase asked.

Compared to other conspiracies Chase has promoted, the 2020 election being stolen ranks among the more popular. Polls show about 70% of Republicans believe Joe Biden wasn’t the legitimate winner of the 2020 election.

But few state lawmakers have done as much to push the idea as Chase. Days after the Post Falls event, Chase wrote an open letter to then-Washington Secretary of State Kim Wyman calling the 2020 election results “fraudulent” and asking for an independent audit, “or else we need [to] decertify the election results.” In the Legislature, he introduced bills that would follow through on his wishes. When those bills went nowhere, he signed onto a petition calling for an audit of the 2020 election in Spokane County.

In an interview, Chase said he believes there’s always been election fraud but that the 2020 election was “way off the charts.” He says he has “no proof,” but at the same time questions why on election night several swing states looked good for Trump but then later turned toward Biden — something easily explained by the regular process of counting legal votes.

Chase also argues that if the 2020 election were fair, then elections officials wouldn’t have a problem with auditing it. Washington already conducts post-election audits.

This is where discussions of the 2020 election move past a good faith debate and start to become dangerous, said Alex Friedfeld, investigative researcher for the Anti-Defamation League’s Center on Extremism. There’s been no evidence that widespread election fraud stole the election from Trump. If lawmakers like Chase were genuinely looking for answers, the conspiracy would have ended years ago, Friedfeld said. Instead, election denialism has gripped Republicans across the country for what Friedfeld fears is a more troubling reason.

“They’re building a machine that’s telling everyone that any Democrat victory is illegitimate and the result of fraud,” Friedfeld said.

ON THE FAR RIGHT

The Institute for Research and Education on Human Rights released a report earlier this year revealing how many state lawmakers across the country were members of extremist far-right groups on Facebook. It found 875 legislators had joined at least one far-right group — 11.85% of all 7,383 state representatives and senators. (The report defined “far-right” as “advocating changes in the organizational structure of the state … or public policies” in a way that would undermine political, social or economic equality.)

That’s almost certainly an undercount, Burghart said. For one, while it lists 29 state lawmakers in Washington as having ties to extremist groups, Chase is not one of them. But don’t be fooled, Burghart said: That’s only because he uses Facebook differently than the lawmakers on the list.

“Chase has adopted a myriad of the tenets from across the far right,” Burghart said. “If there is a far-right cause in the region, he has generally embraced it.”

Chase has dabbled in QAnon. In a post on the far-right website Inland NW Report called “Plannedemic?” he describes his understanding of the sprawling, often antisemitic conspiracy theory. Chase tells InvestigateWest he no longer follows QAnon because they “haven’t published anything” in a while. He thought it was “interesting” because Q had to have been somebody “close to the president.”

On his Facebook page, he’s spread COVID misinformation, calling the COVID-19 vaccine “not a vaccine,” adding it is untested and “created by Eugenecists (sic) who want a smaller Global population.” Chase stands by the post to this day, adding that when he got COVID, he took Ivermectin, the anti-parasitic drug that study after study has shown has no effect on COVID-19.

Then there’s his push to create a 51st state out of Eastern Washington. The idea was first popularized by Shea, who proposed calling it “Liberty.” Chase has introduced bills in the Legislature to split Washington in half, too. Now, Chase said, they’d call the new state “East Washington.” A few other legislators in Washington have supported the idea, too. Chase said many of his constituents support it because they’re sick of Western Washington making decisions for them.

Chase’s opponent this November, Leonard Christian, is a conservative who says he is running because Chase has played a major role in expanding the far-right movement in Washington. He calls the idea to split Washington in half “a joke.” He sees it as the first step of a larger plan to create their own government.

“They really believe in their mind that they’re going to take over the government and secede from the United States and be their own deal,” Christian said.

When an independent investigator came out with a report that accused Matt Shea of engaging in domestic terrorism, House Republican Leader J.T. Wilcox called for Shea’s resignation while booting him from the House Republican Caucus.

Wilcox, however, declined to disavow Chase in an interview with InvestigateWest. Wilcox does not believe widespread election fraud occurred in 2020, nor does he support splitting Washington into two states. But he doesn’t share the same concern about Chase as with Shea. That’s because Shea crossed “the line” by putting law enforcement in danger, and Chase hasn’t done that.

“If Rob Chase were to do the egregious things that were part of that report, I’d feel the same about Rob Chase,” Wilcox said.

Burghart, however, said that kind of thinking can allow far-right ideas to become normalized in state legislatures. While Burghart stresses that there’s nothing wrong with discussing any idea, those promoted by Chase are harmful and based on misinformation. QAnon is antisemitic, and election denialism can erode democracy, he said. Chase, Burghart said, is a conduit for those ideas to make it into the Legislature.

“His profile has definitely grown among far-rightists in the last couple of years. He has essentially replaced Matt Shea in that context as the pipeline into the Legislature, at least for folks in Eastern Washington,” Burghart said.

Chase scoffs at the idea that he’s somehow dangerous, stressing that he’s “not a threat to anybody.” After all, he’s just representing his constituents. He believes at least 30% of people in Spokane County are “grassroots” Republicans like him.