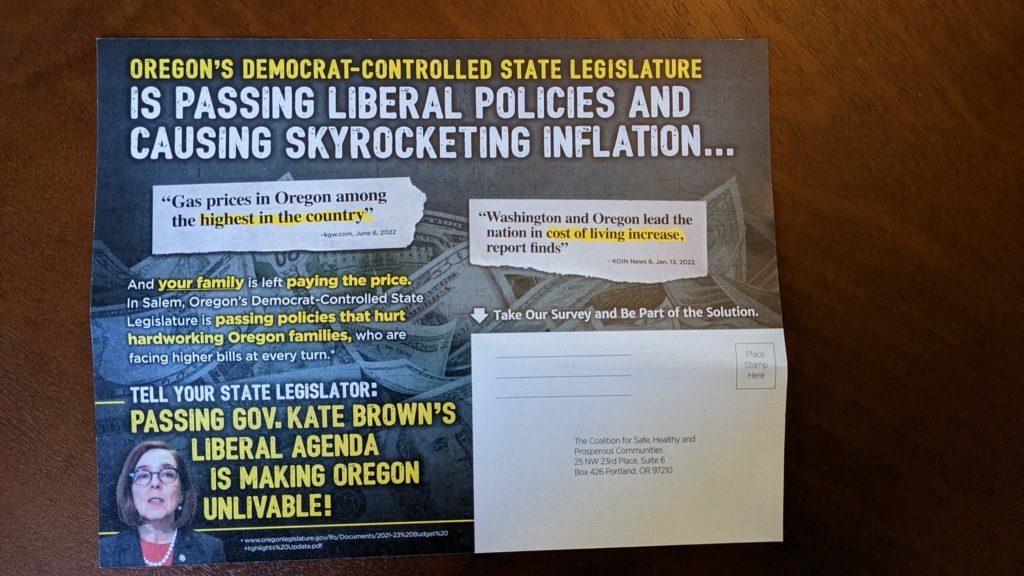 By Julia ShumwayJuly 25, 2022No Comments

A website with two short videos claiming policies passed by legislative Democrats led to increases in crime and inflation went live around the same time.

The mailers, the website and the ads were all paid for by the Coalition for Safe, Healthy and Prosperous Communities – but that coalition doesn’t exist in state campaign finance or business records.

The mysterious mail and online ads come after a national Republican group named the Oregon Legislature one of its top targets. Oregon remains a Democratic stronghold, but Republicans view this year as their best chance in more than a decade of taking control of a legislative chamber.

The organization is all but untraceable, though it shares a name with a newly-formed national nonprofit started by three prominent Republicans with ties to the oil and gas industry. Its failure to disclose its funding and spending could mean it’s violating the spirit, if not the letter, of state campaign finance laws.

“There are some groups that will do messaging work, often under a 501(c)3 designation or maybe a (c)4 where they say it’s not technically about an election or doesn’t technically fall within the campaign finance rules,” said Ben Morris, a spokesman for the Oregon Secretary of State’s Office.  “It’s more just issue advocacy, which there are different rules for. So it’s possible that would be their argument if they’re not registering as a political action committee reporting stuff.”

Organizations that spend money on political ads generally have to file records with the Secretary of State’s Office showing how much they raise and spend and who benefits. Rules differ depending on what type of organization it is, Morris said.

Political action committees raise and spend money to support or oppose a candidate, ballot measure or political party. Within three days of their first contribution or expenditure, PACs have to file a statement of organization with the state’s campaign finance database, ORESTAR, that includes their purpose and contact information.

Organizations that don’t seek contributions but spend money supporting or opposing a candidate or ballot measure are independent expenditure filers. They aren’t allowed to coordinate with campaigns, and they must register in ORESTAR within seven days after spending more than $250.

In a gray area are groups that say they’re doing general issue advocacy, or spending to support a cause but not something directly tied to an election.

After reviewing the mailers, Morris said the Secretary of State’s office would need more information to know where the coalition falls.

Jason Kafoury, a Portland attorney and one of the leaders of an effort to strengthen state campaign finance laws, said the coalition could be blurring the lines of issue advocacy. Nonprofits with 501(c)3 status can’t get involved in politics, while those registered as 501(c)4s can advocate on issues but not for or against candidates.

“‘These politicians aren’t doing X’ sounds like the message, which is a cute way of dealing with it,” he said.

A ballot initiative Kafoury and other campaign finance reform advocates proposed this year would have required every group sending political mail to list its top five donors on the advertisement. It didn’t make it to the ballot, but supporters plan to try again in 2024.

Whoever is behind the mailers and video ads have made themselves difficult to find. The mailers list an address, but it’s a postal annex in Portland where anyone can pay to rent a mailbox.

The website doesn’t have any contact information listed. The whois search engine shows that someone named “Jim Balentine” who works for a company called “MWP” in Atlanta, Georgia, registered that domain on July 12.

The Georgia Corporations Division doesn’t have any records of a Jim Balentine. It lists a number of businesses that use the acronym “MWP,” including painters, photographers and property management companies.

But only one, Atlanta-based MWPolitical, fits the bill. It’s a political digital strategy firm founded by Jim Valentine.

Valentine supports Republicans, according to his social media postings. And SEAL, a political action committee that backs conservative veterans, paid his firm more than $1.8 million in 2020.

Valentine did not return a call or text message on Thursday.

The coalition shares a name with Washington, D.C.-based 501(c)4 that opened last year, according to the Internal Revenue Service. The IRS doesn’t yet have any available copies of the organization’s Form 990 returns, the documents tax-exempt nonprofits must file every year.

But the D.C. corporation registry lists the organization and three directors, all of whom are longtime Republican operatives with ties to the oil and gas industry.

Jeff Berkowitz, the only one with publicly available contact information, was formerly the chief researcher for the Republican National Committee and now runs his own opposition research firm. His spokesman did not respond to an email on Thursday.

Alby Modiano, another director, was the president of the U.S. Oil and Gas Association from 1993 until at least 2018, though he now describes himself as the former president. And the last director, Marc Himmelstein, is a longtime lobbyist for the energy industry.

“I think they’re counting on Oregonians being fooled by that sort of spending, and I think that Oregonians won’t be fooled by D.C. corporate interests disguising themselves to try to appear more grassroots,” he said.

FEATURED IMAGE:  Oregon voters received mailers like this one shared by a source that attack legislative Democrats. (Submitted)

Campaigns target different groups of voters differently. We want to provide transparency about how campaigns and other PACs are trying to target and persuade voters, and you can help. Send pictures of your mailers and social media ads to our senior political reporter at jshumway@oregoncapitalchronicle.com