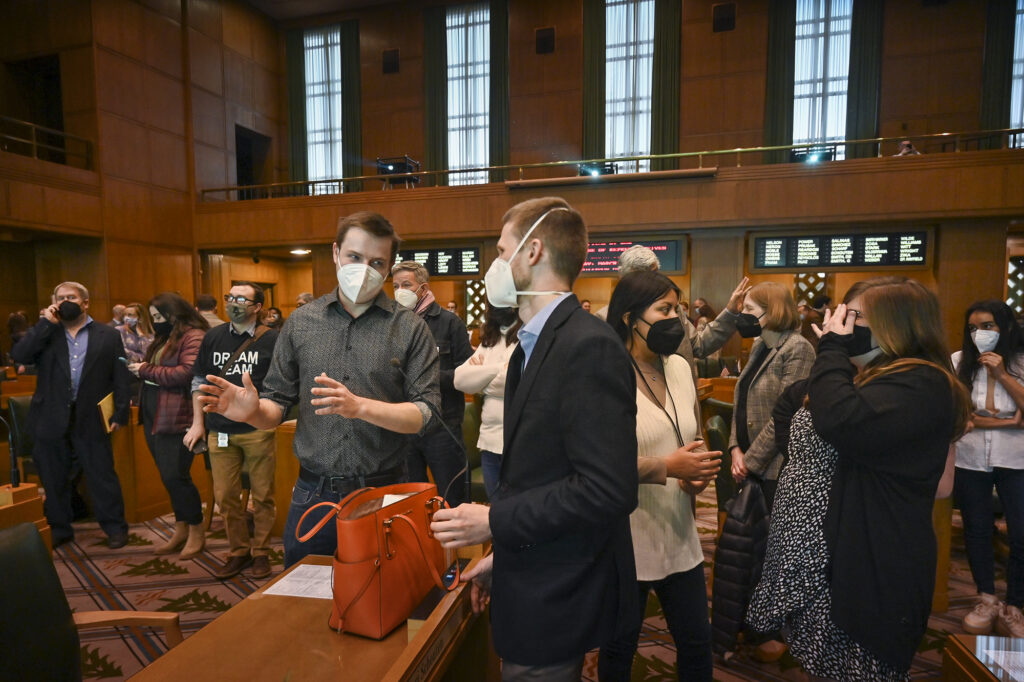 Oregon voters who aren’t registered with any political party reached a significant milestone in March: They now outnumber Democrats.

Nonaffiliated voters have long been the second largest bloc in the state, behind Democrats and ahead of Republicans. Their continued growth, due in part to a 2015 law that automatically registered people getting or renewing driver’s licenses as nonaffiliated voters, could give them more political power.

But they don’t get a say in picking candidates in most primary elections.

When county clerks mail ballots in May, nonaffiliated voters will see one major statewide race for the nonpartisan commissioner of the Oregon Bureau of Labor and Industries, some state and local judges and possibly other local races, depending on where they live. They won’t get to vote on nominees for Congress, governor or the Oregon Legislature.

Nonaffiliated voters have until April 26 to change their party registration and become eligible to vote in the Democratic or Republican primary. They can switch their registration back after that.

News that nonaffiliated voters surpassed registered Democrats brought more attention to a pending attempt to change the Oregon Constitution to allow all voters to participate in state-funded primary elections. Ed Doyle, president of Oregon Open Primaries and the chief petitioner for the proposed constitutional amendment, said he’s been a registered voter with both major parties at different points in his life and was always frustrated by how primaries limited his choices.

Doyle and other petitioners gathered more than 1,000 signatures from Oregon voters, the first step in getting a proposed amendment on the ballot. They’re now reviewing a draft ballot title from the Oregon Justice Department, and once that ballot title is complete, they must collect nearly 150,000 signatures from Oregon voters by July 8 for the measure to appear on the November ballot.

It’s a difficult task for a group that now has about $6,500 in a campaign bank account and will need to pay petition circulators.

“It’s really an uphill battle for us to actually get the signatures in order to get on the ballot,” Doyle said. “It will really depend on funding as we go forward.”

The proposed initiative is simple – just a two-sentence addition to a section of the Constitution. It would require that all voters be able to vote in a state-funded primary for any candidate for Congress, U.S. Senate, the Oregon Legislature and statewide elected offices like governor, regardless of political party.

It wouldn’t apply to presidential primaries or to partisan primaries for local races like county commission.

It also doesn’t prescribe how the state would hold open primary elections, just that all voters must be able to vote for all candidates. That could take the form of the top-two primaries held in Washington and California, or it could resemble a new Alaska election system that will be used for the first time in a special congressional election this summer.

Alaska voters in 2020 established an open primary that sends the top four vote-getters to a general election. Voters then rank their first through fourth choices in the general election, and if no candidate is the first choice of more than 50% of voters, vote tabulators look at the second choices from voters who picked the candidate who came in last place.

In Arizona, nonaffiliated voters who opted to receive ballots by mail have to contact their county clerk ahead of time to request a Republican or Democratic ballot. Otherwise, they can go to a polling place in person and ask for a partisan ballot.

Doyle said a system like that in Colorado or Arizona isn’t the goal, but that the initiative is purposefully vague on what Oregon’s election system should look like. It would force the Legislature to pass laws that would comply with the amended Constitution.

“It may be top two,” he said. “It may be top four. It may be something completely different. Our initiative isn’t defining the solution. It’s opening the door to guarantee the rights for all voters and all candidates.”

Doyle said he anticipates opposition from Democrats and Republicans, who have opposed similar efforts over the past two decades. Oregon voters defeated ballot measures in both 2008 and 2014 that would have created a top-two primary system akin to California and Washington.

Carla “K.C.” Hanson, chair of the Democratic Party of Oregon, said party leaders will decide whether to support or oppose the initiative if it moves forward, but they’ve historically opposed the idea of opening primaries to all voters.

“In the past, the Democratic Party has not viewed it as a viable option and neither have the people of Oregon,” she said. “Oregon voters have consistently voted it down every time it comes up, and they’re right.”

The rise in nonaffiliated voters, though, means both parties need to reach voters in the general election who haven’t chosen either party.

What the initiative says
Amend Article II, Section 1 of the Constitution of the State of Oregon to read:
Section 1. Elections Free. All elections shall be free and equal.
(1) In all publicly funded elections for state and federal office, the state shall only select candidates for the general election by conducting an open primary election in which all qualified candidates and electors may participate regardless of political party affiliation or non-affiliation.
(2) As used in this section, “office” means all state and federal legislative offices and all statewide elected offices.

On some issues, like education funding and taxing the wealthy, nonaffiliated voters tend to align with Democrats. When it comes to trust in institutions or government spending, they’re closer to Republicans.

“Big picture about nonaffiliated voters is that they pay less attention to political issues,” he said. “They have idiosyncratic positions on issues. Give them a list of 10 different things and they’d be conservative on some and might be liberal on others.”

Nonaffiliated voters tend to be younger and less engaged in politics than partisan voters. In the general election in 2020, about 91% of registered Democrats and Republicans returned their ballots, compared to just 65% of nonaffiliated voters.

Nonaffiliated voters would likely still lag partisans in voting even with open primaries, Horvick said, but they might have more of an incentive to participate.

“If you’re a non-affiliated voter in Oregon, you have less incentive to vote in the primary,” he said. “You don’t get to vote in the gubernatorial election, in the presidential election, your legislative election, for secretary of state or any of those other races. And it would make sense that if you don’t get a voice in those elections, that you would vote less because literally your vote doesn’t matter.”