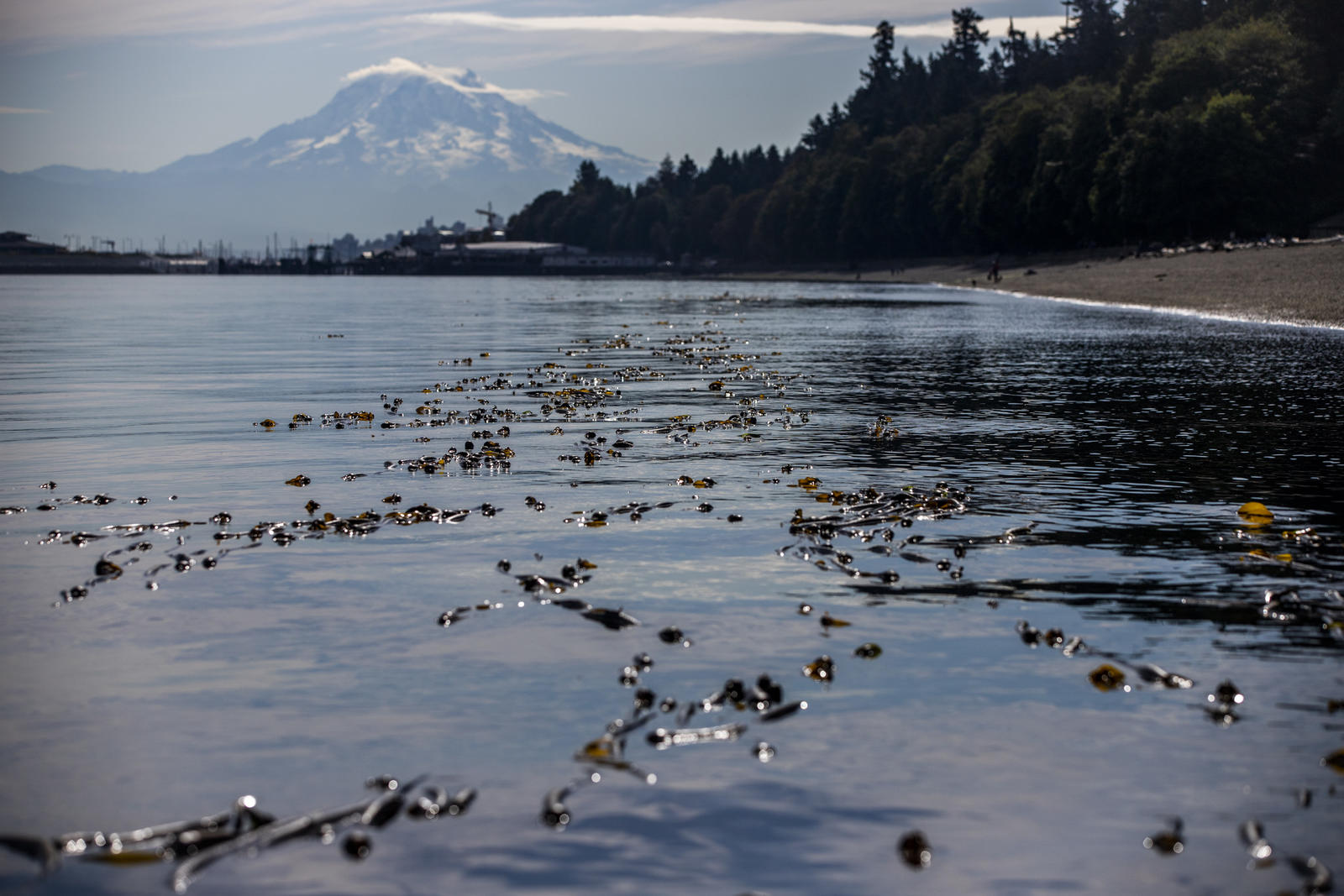 By John StangMarch 1, 2022No Comments

One of the building blocks of Puget Sound aquatic life is disappearing from the ecosystem, and scientists have only a fuzzy idea of why it’s happening and what to do about it.

What the scientists do know is that they are way behind in finding a solution for shrinking kelp and eelgrass beds and that their work could mean life or death for many other species.

Twenty-two species of kelp live in Puget Sound, making it one of the most diversified homes for kelp in the world.

“An alarm bell has gone off; there’s a crisis in eelgrass and kelp in Puget Sound,“ said Hilary Franz, Washington’s commissioner of public lands.

The ecological crisis has become significant enough that state Sen. Liz Lovelett, D-Anacortes, is shepherding a bill through the Legislature to have the state Department of Natural Resouces create a plan to restore by 2040 at least 10,000 acres of kelp forests and eelgrass meadows. At a Jan. 20 hearing on the bill before the Senate Agriculture, Water, Natural Resources and Parks Committee, several aqua-business companies and environmental organizations argued that the scope of the proposed plan should be expanded to Washington’s Pacific coast and the Strait of Juan de Fuca. The bill was amended accordingly.

“I grew up on [Fidalgo] Island.  I’ve had an opportunity to watch the overall decline in our area,” Lovelett said.

If this bill, which has already passed the state Senate, becomes law, the Department of Natural Resources would need to have a kelp and eelgrass restoration plan ready by Dec. 1, 2023, after which state officials and the Legislature would have to figure out how to pay to execute that plan. Franz said she is willing to extend the planning part of the project through 2024, if an extra year is needed.

“Having that blueprint is important,” agreed Jodie Toft, deputy director of the Puget Sound Restoration Fund.

The new plan would likely build upon an existing 2020 regional kelp recovery plan plus a 2015 regional eelgrass recovery plan. Even getting a grasp on the basic problem can be difficult. “We don’t understand enough about kelp and all its needs,” said Jodie Toft, deputy director of the Puget Sound Restoration Fund.

Scientists know kelp and eelgrass beds are shrinking in Puget Sound. “It’s complicated and in some aspects, we’re still working out why. … There is not a smoking gun,” said Todd Woodard, natural resources director of the Samish Indian Nation.

The Department of Natural Resources doesn’t have a concrete estimate of the total acres of kelp in Puget Sound. “It’s one of the monitoring goals we are working toward,” said Berry, the marine biologist with the department. However, kelp is growing along one-third of the sound’s shoreline, of which 10% is floating kelp, such as bull and giant kelp.

There are two basic categories of kelp. One, called “canopy,” is the widely seen and better studied kelp that floats while its strands attach themselves to underwater rock. The other major category is “understory,” which is more abundant but much less understood than “canopy” kelp. Only shallow edges of understory kelp are visible at extreme low tides. The existing Puget Sound Kelp Conservation and Recovery Plan calls for more study of this variety.

Using historic records as a baseline, Puget Sound’s volume of kelp is 20% to 38% of what it was in the 1870s, depending on how the calculations are made. The Tacoma Narrows holds the biggest collection of bull kelp remaining in the area.

Kelp can be found along Washington’s Pacific coast and the western half of the Strait of Juan de Fuca. It is scarce along the strait’s eastern part, as well as around the San Juan Islands, according to scientists.

Meanwhile, about 56,000 acres of eelgrass are growing along Puget Sound’s shorelines. The state does not have a grasp on what the acreage was decades ago. But, using historic records as a baseline, it knows eelgrass was significantly more robust in the late 19th century.

While scientists have not nailed down definite causes, they have several working hypotheses as to why kelp and eelgrass are shrinking in Puget Sound.

One hypothesis: global warming of the water. Kelp does not live well above 62 degrees Fahrenheit. Global warming also sends acid rain falling on the sound, making it more acidic. Runoff from streets and sewage treatment plants is polluting the sound, while underwater erosion makes subsurface rocks harder for the kelp strands to cling to.

Also, excessive nutrients from sewage plants are feeding nitrogen to phytoplankton, causing that species to grow out of control, blocking sunlight to kelp and eelgrass.

As to why anyone should care if kelp and eelgrass shrink in Puget Sound, these species are the foundation of life in Puget Sound — the bottom of the food chain that ripples to all levels of life above it.

Small invertebrates such as sea urchins munch on the eelgrass and kelp. Forage fish and salmon eat the invertebrates. Migrating salmon use the eelgrass and kelp as cover from predators as they migrate to the ocean. However, orcas are savvy enough to know kelp fields are fertile hunting ground for salmon. Native American fishermen and women also know this. “Kelp forests rival agricultural fields in productivity and growth,” Berry said.

“It’s really hard to restore kelp and eelgrass. Therefore, the best step is to conserve it,“ Berry said.  But restoration is the only way to recover what has been lost.

Enter the Puget Sound Restoration Fund, the University of Washington and the National Oceanic and Atmospheric Administration — all with individual and interconnected labs devoted to studying how to grow kelp efficiently in Northwest waters. “It’s how to get the most bang for your buck,” said the restoration fund’s Toft.

In the outside world, some actual restoration has been underway, including off the northern shore of Bainbridge Island. To replant kelp, the seeds are attached to thick white twine that are connected to beachball-size concrete pyramids on the sound’s bottom. But as Toft said, “It’s easier said than done.”

While the mechanics of replanting exist, environmentalists are still working on the wheres, whens and best practices. For example, the Puget Sound Restoration Fund is researching the best densities for seeds being planted and how to sustain those new plants over the years. “We want kelp to bring itself back each year, instead of us bringing it back each year,” Toft said.

FEATURED IMAGE: A bed of Bull kelp off the shore of Owen’s Beach in Tacoma on Sept. 12, 2019. Washington’s kelp, especially in the Puget Sound is seeing an alarming rate of loss. ““Since 2013 the major stressor on kelp has been water temperature. We are seeing extremely high marine temperatures related to climate.” Washington State Department of Natural Resources marine ecologist Helen Berry says. (Dorothy Edwards/Crosscut)