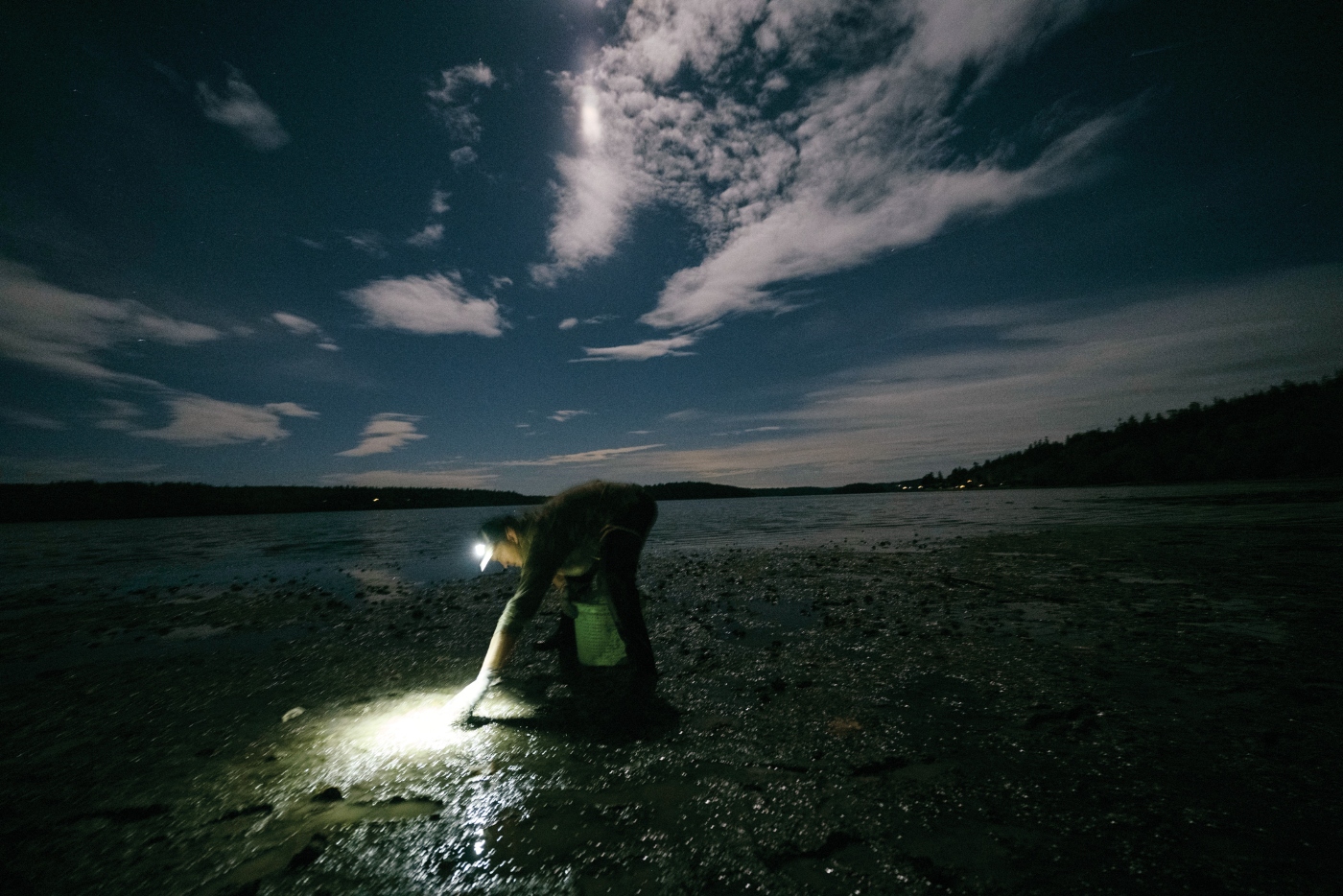 A Shellfish Company Gets into the Weeds

Home » Indian Country » A Shellfish Company Gets into the Weeds

The Swinomish Indian Tribal Community shows how eelgrass and aquaculture can coexist in Puget Sound.

The light of the October full moon bounced across the surface of Washington’s Similk Bay. Stuart Thomas stood ankle-deep in the ebbing tide, flipping black mesh bags filled with oysters.

He opened a bag and pulled out a handful of small ones, barely an inch across, shucking them quickly in the light of his headlamp. “These are Olympia oysters,” said Thomas, cheerful despite the midnight hour. The only oysters native to the state, they’re finally making a comeback after being driven nearly to extinction more than a century ago by overharvesting, habitat destruction and a commercial preference for introduced species, such as the Pacific oyster.

The flesh inside the Olympia’s shell is only the size of a quarter. It tastes sharp, briny and faintly of stone, more ancient, somehow, than the sweet and creamy Pacific oysters that are the mainstay of Washington’s farmed shellfish industry.

A self-proclaimed genetics nerd, Thomas is charged with reviving the Olympia oyster for the Swinomish Shellfish Company. The Englishman had spent years working in Washington’s commercial shellfish industry before joining the company, which is owned by the Swinomish Indian Tribal Community. Now he operates under a different set of rules, with a unique prime directive: Do not mess with the eelgrass beds.

“It was made clear to me early on that everything we were to do would have to be in line with protecting the environment,” said Thomas.

Less than 40 feet away from him, the eelgrass lay flat and unmoving at the water’s surface. Its stillness belied the importance it holds for the marine ecosystem in this part of the world. The grasses serve as a nursery, feeding ground and resting spot for a dizzying number of species up and down the food chain, from orcas to zooplankton, including virtually all the marine foods that Indigenous communities use.

But the plant also grows in or near many of the same places that shellfish do, and conservation measures to protect it have fallen short, according to a lawsuit the Swinomish brought against the federal government in 2018. Food security, both now and in the future, shouldn’t be sacrificed for economic gain, the tribe argues; the two can coexist. The Swinomish Shellfish Company is determined to prove that other vital species can thrive alongside an industry that brings in $150 million a year to the state.

PADILLA BAY, WHICH BORDERS the northern edge of the Swinomish Nation, holds the largest contiguous eelgrass bed in the Lower 48. At very low tide, eelgrass clumps lie fanned out and glistening in the mud. Part of the only plant family to flower completely underwater, eelgrass is essential to Puget Sound’s ecological functioning; its abundance is considered a key indicator of the estuary’s health.

At high tide, if you thrust your head into an eelgrass bed, you’d see tiny bubbles of gas clinging to the thin, almost translucent green strands. These bubbles are formed by the plant as it breathes in CO2 from the water column and breathes out oxygen. Studies have shown that eelgrass beds can help mitigate ocean acidification as the water warms — a growing problem for marine animals and the industries that rely on them, especially the shellfish industry.

The plant’s importance goes beyond climate change, though.

“Native eelgrass is a foundational element of the marine ecosystem. It provides important cover and feeding areas for juvenile salmon, as well as other marine species, like Dungeness crab,” Tino Villaluz, wildlife program manager for the Swinomish Indian Tribal Community and an enrolled member, wrote to High Country News in an email. “Aquaculture activities that diminish or destroy native eelgrass also eliminate crucial habitat for salmon.”

The fight to protect eelgrass is just part of the Swinomish Indian Tribal Community’s larger struggle to protect the habitat that supports many of the foods they rely on for physical and cultural sustenance. For the last few decades, the Swinomish have led the charge to protect habitat for salmon and other species, developing science-based plans to manage populations, restoring tidelands and channels and reforesting streams to keep waters cool.

The tribe, like many coastal Salish tribal nations, identifies as salmon people. But overfishing, habitat loss, dams and climate change have decimated salmon stocks in the sound, straining the tribe’s economic and cultural lifeline and diminishing tribal members’ well-being, said Villaluz. In 2016, the tribe developed its own set of Indigenous health indicators to better understand non-physiological components of community health. Access to “first foods,” such as salmon and shellfish, was identified as being central to tribal members’ health and welfare, especially in a rapidly changing world.

Then, in 2017, a shift in federal policy opened up much of Washington’s coast to commercial shellfish farming. Fearing that thousands of hectares of mature eelgrass beds — and the species that depend on those beds — could be lost, the tribe went to court.

SINCE 2007, SHELLFISH FARMING has operated under a sweeping national permitting system overseen by the U.S. Army Corps of Engineers. In 2017, over the objections of the Swinomish and environmental groups, the Corps adjusted its rules: Now, it said, any place where any shellfish farming had occurred in the past 100 years could be considered a continuous operation and thus exempt from stricter eelgrass protection measures. In North Puget Sound alone, this would have included over 2,000 acres with mature eelgrass beds.

The Swinomish sued both the Army Corps and the National Marine Fisheries Service, arguing that their ability to fish for salmon and harvest shellfish in traditional waters required a healthy ecosystem rooted in eelgrass, and that creating such widespread exemptions would imperil eelgrass. They won against the Army Corps, forcing it to switch from sweeping national permits for shellfish farms to individual permits.

But despite that victory, the Army Corps’ permitting system may still do far too much damage to eelgrass beds, said Amy van Saun, an attorney at the Center for Food Safety, which also went to court over the permitting changes and is suing the Army Corps again over industrial shellfish operation permits. The Swinomish are still challenging the federal government over how much of North Puget Sound’s eelgrass can be harmed by shellfish aquaculture. Meanwhile, they’re trying to get better eelgrass protection into Skagit County’s shoreline management plan.

The goal has never been to stop shellfish farming, simply to ensure that it doesn’t happen at the ecosystem’s expense. The same year that the tribe sued the Army Corps, it also opened its own shellfish operation, determined to prove that coexistence is possible. The Swinomish Shellfish Company’s 55-acre farm was a private oyster farm back in the 1930s, but the tribe permitted the farm as a new operation, with the much stricter protections that new operations require.

THE COMPANY’S OFFICE OCCUPIES an old salmon-processing facility, just across the Skagit River from the picturesque town of La Conner. White boxes printed with red and black images of leaping salmon from the old Swinomish-run salmon company, Native Catch, still line the hallways. Retired salmon-canning machines, which Thomas likens to giant pressure cookers, sit empty. Native Catch shuttered in 2016, after decades of declining salmon stocks. A lot of fishermen and women retrofitted their boats for crab and shrimp, and salmon went from being an everyday staple to something that was stored in a communal fridge and reserved for special occasions like weddings, funerals and ceremonies.

Laura Wilbur, a Swinomish tribal member who now works for the shellfish company, spent her childhood playing at the site, which her grandfather helped build, when it still dealt in salmon. Now, she’s one of a handful of full-time employees at the Swinomish Shellfish Company. “I’m excited to work somewhere where I can give back to my community,” she said, standing by the storefront where the company sells fresh oysters to the public on Fridays, her long waders pulled up thigh-high.

The shellfish company also sells its oysters at gas stations around the reservation for around a buck a piece. The oysters are becoming a mainstay at community gatherings. “Swinomish Fish Company is not just about revenue for the tribe,” Thomas said. During the pandemic, the tribe worked to help alleviate food insecurity in the community. Along with a box of basic staples and fresh produce, sourced from a local farm, it provided more traditional food as well: oysters, cleaned and ready to eat, fresh from Puget Sound.