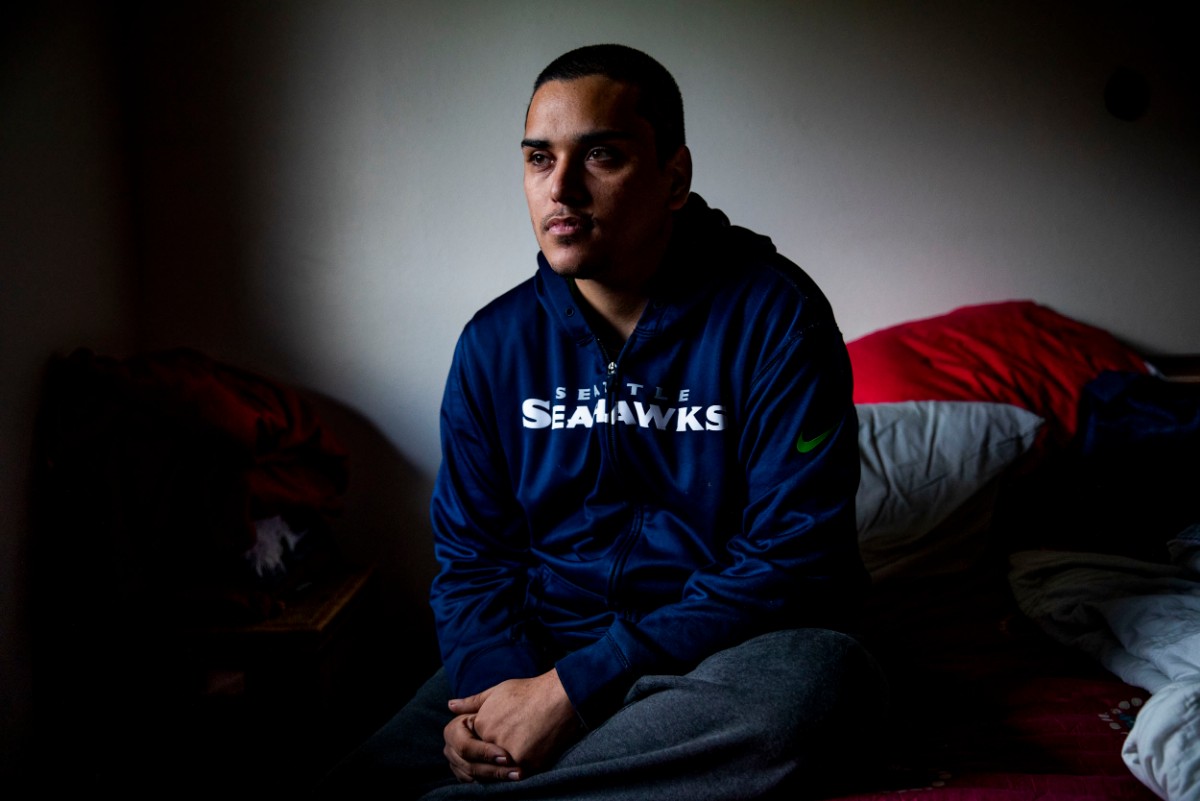 For more than two hours, a foster youth who had just been shipped by Washington state officials to a privately run Iowa group home was held down by three staffers, his wrists and heels painfully pinned to the floor.

His transgression? He cursed.

Washington foster youth Valery Roseus said he didn’t even know vulgar language was not allowed at Woodward Academy in Iowa, which is operated by Sequel Youth & Family Services. He would learn in coming months that staff members frequently used physical restraints like what he suffered after his arrival.

“I hated that place so much,” Roseus said.

Roseus is one of three Washington foster youths to recount mistreatment at Sequel facilities in interviews with InvestigateWest.  Washington foster youth Austin Hunt said he was regularly held down for up to half an hour at a Sequel-run facility in Idaho. And Jesus Lopez, in a story published in early 2019, recounted how workers at Sequel’s Clarinda Academy in Iowa repeatedly picked up the 17-year-old, dropping him onto his buttocks and pushing him forward until his face hit the floor, bruising his forehead, leg, back and arms.

The accounts of these three foster youth comport with failings uncovered in a national news report released in September. The yearlong investigation by APM Reports showed widespread abuse of youths at Sequel facilities throughout the United States. The practices included physical abuse by staff members who restrained youths in their charge.

Sequel officials refused to comment on accounts of mistreatment from Roseus and Hunt, but said “the type of behavior described in these student anecdotes is antithetical to who we are as an organization committed to the care and education of youth.” In response to Lopez’s allegations in 2019, Sequel Executive Vice President Steve Gilbert wrote, “We work diligently to ensure that we are providing the best care possible for our students, including continually improving our policies and procedures. If we identify a problem in our organization, we self-report it and make the appropriate correction immediately.”

Sequel’s public-relations firm, Lambert & Co., and the executive directors at each of the three Sequel facilities that Roseus and Hunt discussed also declined to answer InvestigateWest’s questions about policies on physical restraints and other practices specific to the facilities.

Sequel wrote in a recent statement to InvestigateWest that “restraints are never an appropriate first response unless imminent danger is being displayed to oneself or others around them.”

That doesn’t jibe with what Roseus says about the two times he was restrained at Woodward Academy, where he lived from August 2016 to January 2017. On the other occasion, Roseus was horseplaying with another child, and staff thought they were fighting. Employees put him in another restraint, this time for about two hours, he said.

There were six employees on top of him, he recalled, and they pushed on his kneecap and moved it.

Judging by what he heard on employees’ walkie-talkies during his stay, Roseus estimated, physical restraints of children occurred about three times day. Children at the facility didn’t watch the restraints because they went into other rooms and waited them out, Roseus said.

Roseus said he phoned a DCYF caseworker and told him that Woodward was “a hands-on place.” Yet the department kept him at the Sequel facility for almost six months.

DCYF spokeswoman Debra Johnson said she could not comment on Roseus’ account of his phone call to his caseworker or whether the caseworker followed DCYF policy. “The agency cannot legally respond to case-specific information,” she responded by email.

The agency also refused to comment on the case of Hunt, a Washington State foster child who said he was routinely hurt by employees at Mountain Home Academy in Mountain Home, Idaho, where he lived from January 2017 to June 2018.

Now 16, Hunt, with one of his lawyers present, gave InvestigateWest permission to use his full name as he described his experiences. He said that, in addition to socially pitting other children against him at that Sequel facility, employees subjected him to physical restraints one or more times a day. Those involved slamming, kneeing and holding, he said. They lasted anywhere from 15 minutes to a half hour.

According to Hunt, employees sometimes performed the restraints as punishment for him being too loud or annoying other children. Hunt said he never had a physical fight with an employee or another child before staffers restrained him.

During the restraints, Mountain Home employees would put their knees on Hunt’s buttocks and “slam” Hunt into the floor, he said. Sometimes they would do that, stand him back up, and then slam him into the floor again. They shoved him into carpet and linoleum, he explained.

The restraints typically involved two employees: one who would hold Hunt’s arms behind his back and another who would lie on his legs after the employees had pushed him to the ground, Hunt said.

Mountain Home employees seemed to use this physical tactic in an arbitrary way.

“They restrained us for whatever [reason] they felt like,” Hunt said.

Hunt’s DCYF case notes from his time at that Sequel institution indicate that DCYF employees knew about Mountain Home staffers physically restraining Hunt. Susan Kas, a child advocate and one of Hunt’s lawyers, shared those notes with his permission.

In January 2017, an employee with DCYF’s predecessor, the Department of Social and Health Services, wrote to two other agency employees, “I talked to Austin today and he reported ‘they hurt me.’ I asked him how and he described to me what sounded like a hold.”

A later case note bearing the names of other caseworkers read, “Aggressive [sic] that leads to restraints (5 incidents in September).”

Hunt said he told a DCYF caseworker about the restraints at least six times throughout his time at Mountain Home.

Johnson, the DCYF spokeswoman, declined to say whether the department employees managing his case adhered to department policy.

After Mountain Home, Hunt spent more than two additional years at other out-of-state facilities, neither owned by Sequel. He ended up back in Washington with a foster home that didn’t work out, he said. Hunt then found himself part of a disturbing trend among Washington foster children: sleeping on couches overnight in DCYF offices for about a month straight earlier this year.

Now Hunt is again in a group care facility, but this time, in his home state.

Photo caption (top of story): Jesus Lopez was restrained by staff at Clarinda Academy, causing severe bruising. He shared his story in 2019 in the hopes that no other kids suffer the way he did.