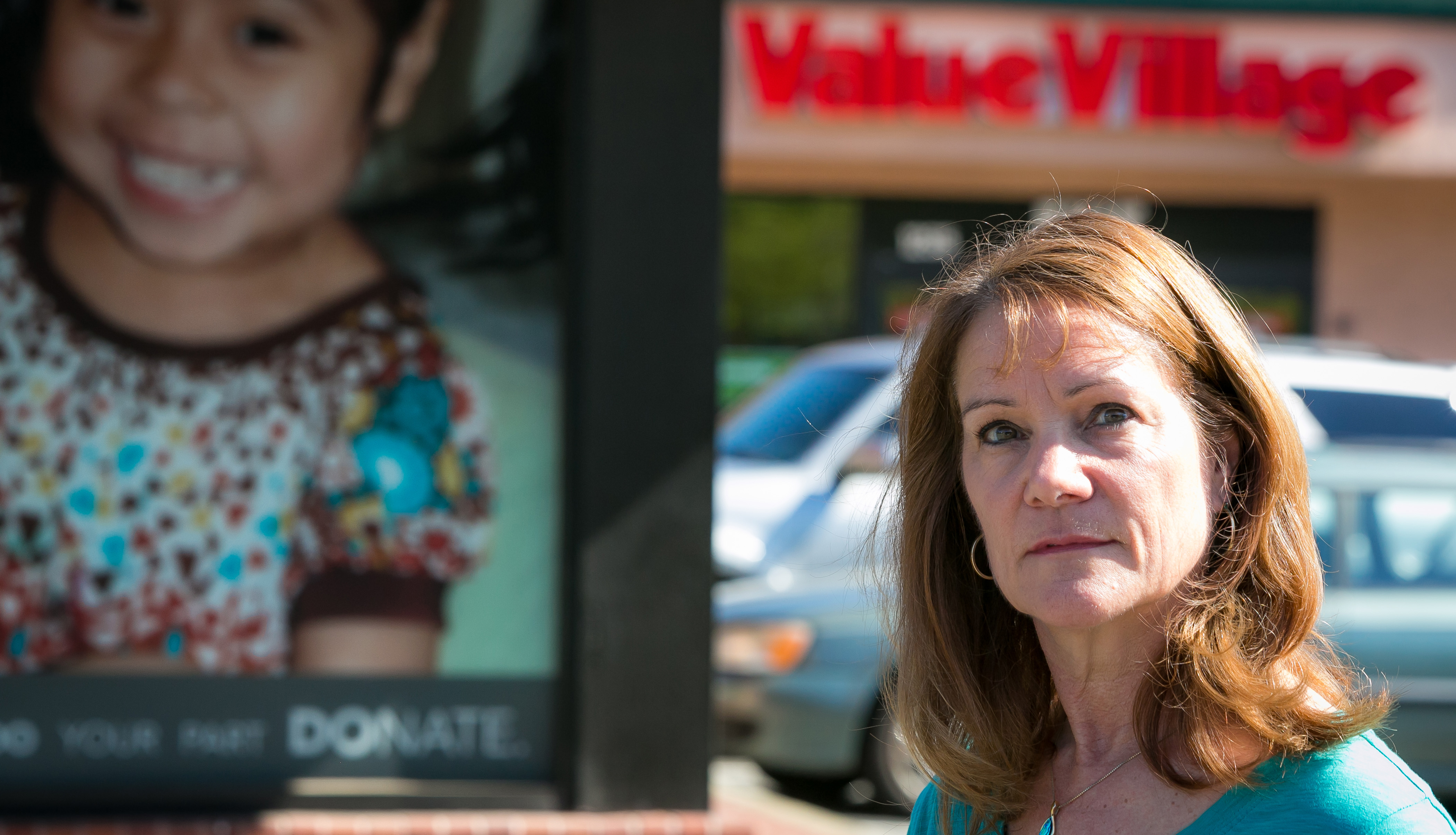 Meanwhile, a “Boycott Value Village” Facebook page that sprang up partially in response to InvestigateWest’s reporting is focusing on what critics call unfairly high prices in stores run by Value Village and its parent company, Savers, Inc., in 30 states and across Canada.

And Tania Ibanez, senior attorney general in the California Attorney General’s Office’s charitable trusts section, said in an interview that InvestigateWest’s Profiting from Thrift stories “have been invaluable in exposing this issue.”

“A lot of people don’t know that charities aren’t getting very much from donations to thrift stores,” Ibanez said.

As a private company, Savers is not required in most states to reveal how much of its revenue goes to its charity partners, which it heavily promotes as groups that “improve education, fight diseases and help children and families.”

However, InvestigateWest concluded that Savers pays just 8 percent to 17 percent of its revenue to charity partners. The series was based on extensive interviewing of former and current Savers employees, nonprofit leaders, charity watchdogs, and others; public records requests at the state and federal level; and analysis of government data and privately produced financial reports.

Savers’ biggest nonprofit competitors, such as Goodwill and The Salvation Army, devote the vast majority of their revenues to programs helping those in need, according to audited financial statements that they are required to make public.

Profiting from Thrift also revealed that Savers does not routinely tell donors how much of their used-goods donations actually go to charity — the part that is deductible on federal income taxes. As a result, according to tax experts and charity-watchers, it’s likely that many donors overestimate allowable deductions, taking a tax deduction that is far too high. The result, say critics, is a drain on the public treasury, forcing other taxpayers to pay more.

“Not only does Savers give shoppers the feel-good impression of supporting a charity, they appear also to be enabling wholesale tax fraud,” wrote Providence, R.I., consumer Steve Murphy, a middle-school math teacher, in an email to InvestigateWest. “I have been dropping off trunkloads of goods at this Savers store for several years, receiving this type of receipt, and claiming the value of the donations as a charitable contribution on my tax returns.

“In the future I plan to drop off my goods at the Salvation Army.”

Those same concerns were raised by the Minnesota attorney general in the run-up to a lawsuit filed earlier this year that Savers settled, agreeing to pay $1.8 million to its charity partners in Minnesota.

Online, where the story was seen more than 80,000 times, many readers railed against what they characterized as duplicity in Savers’ marketing, spurring calls for boycotts. More than 6,600 comments about the story were shared on Facebook.

Many readers expressed frustrations. Wrote one: “We finally have a forum with which to vent our anger at their greed for donated items.”

The founder of the “Boycott Value Village” Facebook page, Leah Delorme of the Vancouver, British Columbia, area, commented on a version of InvestigateWest’s story that appeared on NBCNews.com: “This is exactly why I started the Boycott Value Village page on Facebook.  At first it was just a place for me to vent, but now it keeps growing, as more and more people have had the same experience. ENOUGH IS ENOUGH.”

Delorme, a mother of two, said in an interview that she grew up shopping at Savers stores but now is outraged by how high prices have risen, particularly in view of the company’s charitable claims.

“If they were more upfront about their business practices, they would publicize their numbers, what goes to charity and be honest about what they retain in profit,” she said.

Delorme started the page soon after seeing a Facebook post objecting to a winter coat priced at $199.99 in a Value Village store. That post by David Pelletier, a trucker from Saskatchewan, triggered some 7,100 comments, 20,000 likes, and 67,000 shares, and prompted at least four Canadian news outlets to write stories about the public outcry. 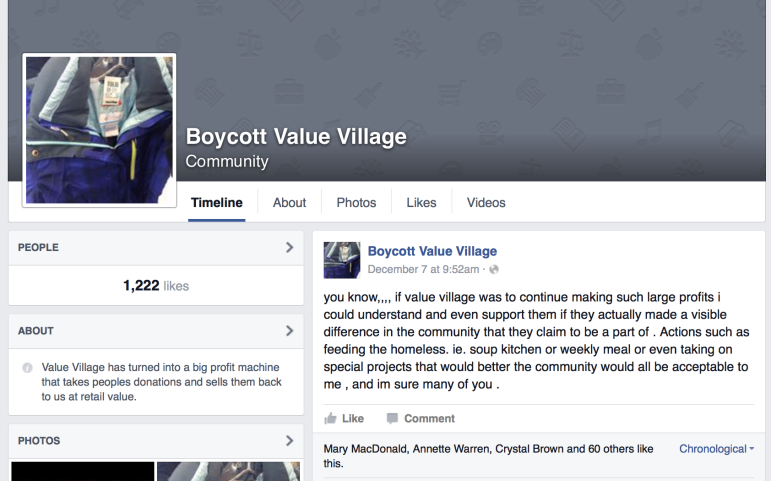 A new Facebook community calling for a boycott of Value Village

InvestigateWest began probing Value Village and Savers in spring 2013, filing requests with government agencies for public records that found numerous consumer complaints alleging deceptive practices in marketing and other areas. InvestigateWest also raised questions with state officials in Washington, where Savers is headquartered, about the thrift chain’s failure to register as a commercial fundraiser over many years.

In November 2014, the Minnesota Attorney General’s Office issued a report that dovetailed with InvestigateWest’s emerging findings.

The Minnesota attorney general’s investigation, which likewise questioned whether Savers’ marketing was leading taxpayers to claim inflated deductions, was followed by a state lawsuit that Savers settled in June 2015, just a month after it was filed. Savers did not admit guilt but agreed to change several of its business practices in Minnesota, including making clear that the company is for-profit and paying charities for all the merchandise delivered.

Among the consumers who commented on InvestigateWest’s story on NBCNews.com was Lauren Colburn, who wrote: “For-profit charities should be required to have complete transparency in the donation, sales, charity-partner benefits production chain.”

A commenter on InvestigateWest’s website called it personal: “If smaller charities can function by selling donated items to Savers at a tiny percentage of their retail price I suppose that’s of some benefit, but I don’t care to help further enrich Savers’ executives. In the future I will donate directly to Goodwill or the Salvation Army.”

“Congrats on a great story with a lot of reasons for the public to rethink their donations to Savers stores,” consumer Marie Emerson wrote in an email to InvestigateWest.

Not all reactions were critical of Savers. One commenter wrote to the Seattle Weekly: “Value Village may only donate a small percentage to charities, but that’s between them and the charities to bicker about how much the charities actually get — again, this is America and this company is in business to make money. It simply doesn’t matter to me. I go in to buy a $30.00 pair of jeans in almost new condition for $7 or $8 bucks and I’m happy.”

Savers did not respond to requests for comment for this story.

InvestigateWest documented that at least six nonprofits that previously collected and sold merchandise to Savers had in the last six years halted that arrangement and that at least three had opened thrift stores on their own. 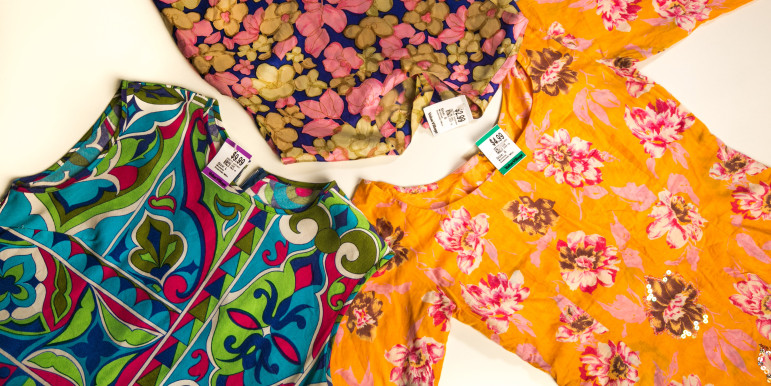 One of those nonprofits was the Arc of Spokane, where spokesman Brian Holloway praised InvestigateWest for alerting consumers.

“I am glad you are bringing this to light,” Holloway wrote in an email. “Your story illustrates much of our experience working with Savers. They seem to have very little interest in the ‘charity’ component of the business — virtually none, in fact.”

Another nonprofit that severed its partnership with Savers was Big Brothers Big Sisters of Prince George, in British Columbia. Its executive director, Tim Bennett, wrote in an email to InvestigateWest: “As an organization we terminated our relationship with the organization [Savers] for many of the reasons outlined in the article.… Thank you for bringing [these] concerns to light.”

“There are always going to be people thinking prices are too expensive,” said Adele Meyer, executive director of NARTS, the national Association of Resale Professionals, based in St. Clair Shores, Mich. Nor is Meyer optimistic that much will change unless many more people become aware of for-profit thrift stores’ practices and the stores are required to actually publicize their for-profit status. For now, “It’s not on the door or on the walls for customers to see,” Meyer said.

“There were big headlines everywhere with Savers, and stores like them, and they got a lot of negative publicity,” she says. “And then it died very quickly, and the company began to really thrive and kept going.”

The issue pops up from time to time, Meyer said, and “We’ll see what happens this go-round.”