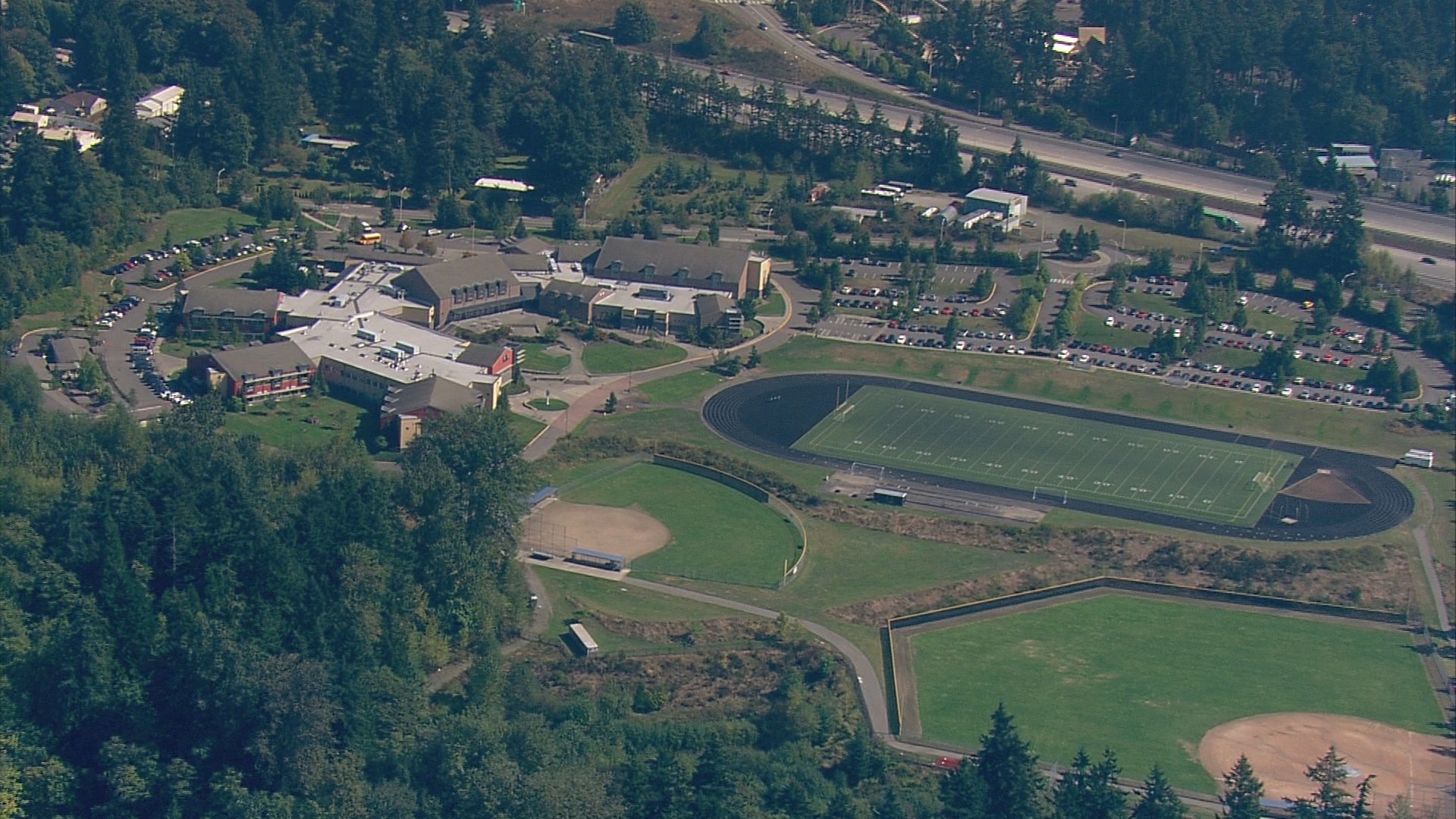 In spite of the substantial evidence of air-pollution risks to children who attend schools near large roadways — including lung problems, asthma attacks and heightened absenteeism — policymakers at both the state and federal levels ducked the issue in recent years, records and interviews show.

The risks were squarely presented. At about the same time in 2008 and 2009, independent groups of officials meeting in Olympia and Washington, D.C., considered and then rejected the notion of banning or severely restricting construction of schools inside the pollution plume emanating up to 500 feet from major roadways.

That lack of action means schools in Washington and across the country continue to be built near the nation’s biggest and busiest roads, despite compelling evidence that roadway pollution can set kids’ health back for life.

“It’s common sense, you’d think that common sense would prevail,” said Steve Fischbach, a Rhode Island lawyer who advised the U.S. Environmental Protection Agency during the federal process. “But the number of bad examples shows us that poor siting decisions still go on.”

At least six states have adopted explicit rules about avoiding major transportation lines during new school construction. When it had the chance, Washington — lauded as one of the nation’s greenest and cleanest states — did not.

Instead, Washington opted to largely leave it up to local school boards and health boards as to whether to consider road proximity when deciding where to put a school.  State health officials only provide school boards with expert advice or national studies if asked, said Nancy Bernard, an indoor air quality expert with the Washington Department of Health. 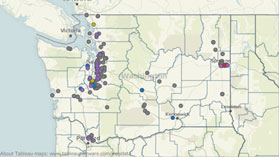 That strategy has not worked, though. It has not kept new schools out of roadway pollution plumes.

Eight Washington schools have been built within 500 feet of major roads in the past 10 years — after the emergence of compelling scientific evidence of harm to kids. Five hundred feet is the distance beyond which traffic pollutants usually start to dissipate to less harmful concentrations, researchers say.

At least 28 Washington schools lie within this area across the state, an InvestigateWest analysis found, with eight located within the more potent zone of 300 feet or less from the highway. Of those 28, three-quarters are also beside the largest truck routes, where toxic diesel exhaust is likely to be most prevalent and can further aggravate health problems.

California is the state that tackles this issue most vigorously, prohibiting the construction of new schools within 500 feet of freeways except under special circumstances. The limit applies to roads carrying 100,000 vehicles per day in cities and 50,000 vehicles per day in rural areas. California has some of the worst air in the country, with 40 of its 58 counties out of compliance with federal pollution limits.

Washington’s air quality is a lot better than California’s. And yet Bernard, of Washington’s Health Department, said that she sometimes gets calls from school districts asking for advice about siting schools near roads.

“If I get asked, I recommend California’s statute,” Bernard said.

In addition to California, at least five other states restrict new school construction near some major transportation lines, according to a 2006 study that Fischbach, the Rhode Island lawyer, prepared for the EPA. Indiana prohibits new schools within 500 feet of a railroad. School boards in New Mexico need the permission of the state to build within 400 feet of  “any main artery of travel.” (Eight other states ask districts to consider siting schools away from highways without banning the practice.)

In Washington no such red lights apply.  Washington is one of 36 states without restrictions on buildings schools near environmental hazards; the only siting restriction for new school locations in Washington is decibel level. Noise at a proposed site can’t be louder than a washing machine.

The only other requirement in Washington is that schools get the sign-off from a local health district during site selection. Major construction or renovation often triggers an environmental review under the State Environmental Policy Act, too. But such reviews for several new schools within the pollution plume of Interstate 5 failed to point out the highway’s risks to health.

Officials knew of dangers “for years”

Washington’s Health Department set out in 2004 to update its health and environmental standards for schools. After the Legislature intervened in 2008, though, the Health Department set up a committee of officials from school boards, local health boards and other interested groups to advise the state Board of Health on the new standards.

At the time, state health officials knew proximity to roads was a problem. An April 2008 draft of the siting rule drawn up by the Board of Health would have required schools to identify highways, roads, railways and airports within a half mile of the proposed school site. The board also pointed out in a rulemaking document that officials had known “for years” that traffic pollution harms students, but that concerns about it had often fallen through the cracks of new site reviews, even pinning the blame on its own barebones requirements.

But when the next draft of the Health Department’s proposed rules was released, the provision to protect school kids from traffic emissions had disappeared.

Board of Health staffer Ned Therien said that although health officials toyed with something like California’s setback, they didn’t think the science was strong enough on what distance from roads posed a danger to kids health.

But any hard-and-fast buffer in pollution science is going to be somewhat arbitrary, said John Levy, a Boston University researcher who measures exposure to pollutants.

“There’s no bright line. These are all gradients,” Levy said, noting that after about 300 to 500 feet, pollution drops off markedly.

The deathblow for road-related rules in the new state code came from schools themselves. Therien said school officials fretted that mandatory reviews of nearby transit corridors would delay the construction of new schools, particularly given that many school levies have use-by dates that could expire before reviews and the search for safer property were complete.

Throughout the rulemaking process, “The schools didn’t want anything that was going to cost them money,” said Health’s Bernard.

“We just didn’t feel we could get there,” Therien said.

As in Washington, cost was a speed bump along California’s road to its traffic pollution law. California’s statute, as it passed, was a watered-down version of an original bill that was bargained down by school boards and others. It was the Senate Education Committee that scaled back the minimum distance in urban areas from 1,000 feet to 500 feet.

Washington’s Therien acknowledges that air pollution “is something schools should be concerned about.” And he says that’s what rules are for — to tell local officials what health threats to look for.

And yet, for now, Therien said, “Who has the authority for dealing with that, I’m not totally sure.”

While officials in Olympia were grinding through rulemaking, proponents of safe schools on the national stage received a big break.

A 2007 federal law called the Energy Independence and Security Act directed the EPA to create voluntary guidelines on the safe siting of new schools. The guidelines were to serve as a non-binding reference document for states and school districts on best practices around environmental health.

It was in part a response to the report published in 2006 by Fischbach, the Rhode Island lawyer, on the lack of siting policy at the state level. The 105-page report found that two-fifths of states had no siting policies related to environmental hazards.

Fischbach was part of the brain trust — known as the School Siting Task Group — gathered by EPA to advise the agency about what environmental risks should be considered for schools. Composed of health specialists, school representatives and environmental-justice advocates, the group prepared its own version of the guidelines, a document that Fischbach calls “the gold standard” on school environmental health.

The panel developed a list of environmental hazards that school districts should avoid when building new schools. Gas stations, drycleaners and large livestock operations made the list, and so did high-traffic roads. Most of the hazards were listed with an exclusion zone attached — an “abandon-this-site” buffer in which the group said schools shouldn’t be built.

But EPA staffers had the final say. And when it came to the guidance EPA distributed to the public, the agency nixed the idea of a ban on schools near roads. Instead, EPA staffers called for “screening zones,” a system that identifies hazards but doesn’t direct officials to avoid building schools next to big roads or near other hazards.

The agency said it chose not to set minimum distances from hazards because proximity to a hazard like a freeway doesn’t absolutely predict exposure. Topography, wind direction and other factors influence how much pollution people take in.

In fact, a one-size-fits-all approach to school siting “could create less healthy environments for students and staff through increased transportation risks, reduced opportunities for walking and biking and increased traffic-related air pollution,” the agency states on its website. EPA spokeswoman Molly Hooven cited the passage in response to questions from InvestigateWest. The agency refused to grant an interview request but did answer two questions via email.

For Fishbach and others on EPA’s advisory board, the agency’s decision was a white flag.

In emphasizing environmental reviews over hard buffers, as Washington did, the agency’s advice to the public, states and schools boards has a “huge defect,” Fischbach said, because all it recommends is a review that exposes environmental drawbacks of a school site without preventing the school from actually being built.

Also in the advisory group was Stephen Lester, an environmental health expert best known for his work as a New York State consultant at Love Canal, one of the most egregious cases of toxic waste dumping in American history, now co-director of the Center for Health, Environment and Justice in the Washington, D.C., area.

Lester said that when it comes to children’s health, policies need more categorical “no’s” than site reviews and assessments.  With the EPA’s guidelines, Lester said it’s clear why they chose the latter.

“They didn’t want to open that Pandora’s box,” Lester said. “They knew that if they were to put exclusion criteria in there, it would raise these questions about schools already sitting in these hazardous zones, and reasonably so. Parents would say, ’My kids are at risk.’ And then what?”

“Then EPA is in the business of not having good answers for those questions.”