Rain gardens got a bad rap last year in Ballard when a portion of the neighborhood’s gardens failed to drain, upsetting some residents. But for a neighborhood in Everett, the shallow, plant-filled depressions are a source of pride and offer welcome relief from some nasty flooding.

Laura White had raw sewage spewing into her Everett home after a record storm last year.

“Sewage was coming through the showers, drains, toilets, everything,” White said. “It just blasted through all the backflow valves.”

But now that the city has installed a rain garden in front of her property, as well as made sewer improvements, White is optimistic the problem is solved.

Rain gardens are a tool used for reducing the amount of polluted stormwater flowing into sewer systems and Puget Sound. The gardens collect stormwater, which infiltrates permeable soils and is used to water the garden.

White said her rain garden is kind of an eyesore right now, but hopes it will be more attractive when the native plants mature.

“There is a big drain and ugly pipe sticking up,” White said. “But I really like the eucharis and columbines, and watching the animals.”

She said people walking by seem to like it and always comment on it. She said her family attributes a relatively dry basement this past winter to the rain garden, since most of the excess water from her back and front yards is diverted to the garden.

“It makes me very happy there’s no water coming through the cracks in the floor,” White said.

Elsewhere in the region, King County planners are hoping experiences such as White’s will encourage more people to embrace rain gardens, which have been controversial since well-publicized problems surfaced in Ballard last year.

King County this month entered the final planning stages for its newest rain garden project, to be located in two West Seattle neighborhoods.  The planners say they are being careful not to make the same mistakes as the City of Seattle did with some of its Ballard rain gardens.

But some West Seattle residents are still opposed.

“We are mostly worried about safety, there are lots of small children in this neighborhood and we are concerned the rain gardens could present a drowning hazard,” said Sabrina Urquhart, a West Seattle resident.

Urquhart and four of her neighbors sent a letter to King County Executive Dow Constantine outlining their concerns, which mostly echo complaints from the Ballard project.

County planners say they are studying and planning the rain gardens carefully and plan to use special wells to prevent the gardens from pooling. The “injection wells,” as they are called, use gravity to force water down into permeable soils, below the less permeable glacial till that is found in many Seattle neighborhoods.

White said an injection well was key to the success of her garden in Everett. She said her rain garden was not draining before her injection well was turned on. But now the water drains within 24 hours, no matter how much rain falls.

King County will finalize its plans for construction and location of the rain gardens over the next nine months through various neighborhood surveys and meetings with individual residents and neighborhood groups. Planners presented preliminary plans for the gardens during a March 28 meeting at Westside School in West Seattle. Residents were able to ask questions and give feedback to the team of county workers and private consultants involved in the project. Neighbors voiced a wide range of concerns at the meeting, demonstrating the project’s varying levels of support from the neighborhood.

The majority of neighbors in attendance seemed to be in favor of the green building techniques. A smaller group, however, opposes the project, with concerns about safety, parking and property values. Project leaders assured residents at the meeting that the West Seattle project would be different than the Ballard project, with considerably more time and money spent on planning and research for the rain gardens.

“This is not Ballard,” said the project leader for King County, Mary Wohleb. “We have taken over a year to study and plan this area. We aren’t rushing it.”

Seattle officials have acknowledged moving too fast on the Ballard project in order to secure funding from special federal economic-stimulus money.

In addition to pooling, neighbors of the proposed West Seattle gardens also are worried about a loss of parking on their streets, since some of the rain gardens will “bump out” the curb a few inches into what was previously a parking spot. Parking is already limited in the neighborhood, where most residents park their cars on the street and many alleyways are rutted and unusable. Residents say the rain gardens will further the parking problem and lower property values as a result.

Geologists and rain garden engineers presented their findings and plans for the neighborhood at the March 28 meeting, offering first glimpses of rain garden features to the public. In their geotechnical studies of the soil, geologists found the same low-permeability “Vashon till” that was found in parts of the Ballard neighborhood. The team plans to use underdrain pipes and injection wells to help water drain from the rain gardens and prevent the pooling that angered neighbors in Ballard.

Engineers have installed the wells in rain gardens across the region. Last fall, the City of Everett worked with the 12,000 Rain Gardens project to install a cluster of the gardens in a neighborhood plagued by flooding and sewage back-ups. Now, at least two of the gardens are using injection wells successfully, including Laura White’s.

12,000 Rain Gardens is a collaborative effort between Washington State University and Stewardship Partners, a Seattle-based non-profit group, with the goal of constructing 12,000 rain gardens in the Puget Sound region by 2016.

The Lombard neighborhood where White lives in Everett is one of many success stories touted by environmentalists in favor of rain gardens. The neighborhood applied to be a part of the city’s pilot rain garden project and was accepted in large part because of its historic flooding issues. The flooding reached a climax in the record-breaking rainstorm of 2011, when runoff overloaded the combined sewer system so badly that it sent raw sewage back into people’s homes.

The city renovated the neighborhood’s ancient sewage system after that event, and later approved the area for the pilot rain garden project. Over the past six months neighbors have seen a dramatic reduction in basement flooding.

Britt Stromberg, who lives a few houses away from White, has one of the biggest rain gardens in the neighborhood. Her family decided to transform almost half of the lawn into a rain garden. Stromberg said the garden requires some weeding and maintenance, but in a year or two the native plants used in the garden should establish themselves.

Maintenance of the rain gardens and its facilities is one of the concerns shared by some of the neighbors in West Seattle. Residents said they don’t think the county will uphold its maintenance responsibilities, while leaders of the project have assured residents that the rain gardens are the county’s “facilities” and that they will be maintained.

Unlike Everett, where the gardens are in people’s yards, King County plans to put the West Seattle rain gardens in the planting strip between the street and sidewalk, which is public right-of-way.

West Seattle project leader Wohleb said she understands the concerns, but that rain gardens are the most cost-effective approach for the community to reduce its stormwater pollution.

“It’s going to be inconvenient for some people, and I’m sorry about that,” Wohleb said. “We are going to work to minimize that inconvenience. But we have a bigger problem.” 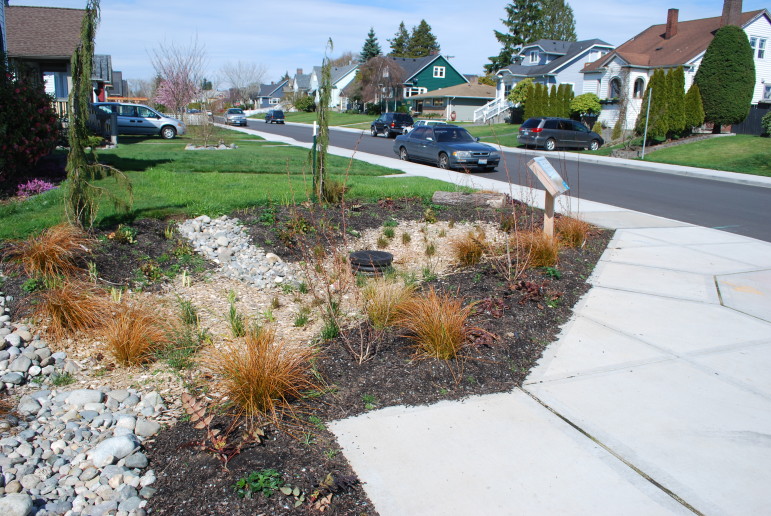 This large rain garden in Everett’s Lombard neighborhood helped to end disastrous flooding in the area.

The big problem facing the county, and the reason it wants to install the rain gardens, is that overflows from an overloaded sewage system go untreated into the Puget Sound. Stormwater flows off of hard surfaces, taking pollutants into drains leading to the combined sewage system, which treats all the wastewater from buildings, as well as the polluted stormwater. When these systems reach their limits during large storms they overflow, spilling raw sewage into the Sound. The Barton pump station in West Seattle, which is where this neighborhood’s wastewater ends up, overflows four times a year, on average.

The Sunrise Heights and Westwood neighborhoods were chosen for the Barton rain garden project because of the amount of stormwater they contribute to the combined sewer system. According to the county, the two neighborhoods contribute 45 percent of the water draining into the Barton pump station.

The county explored other options for reducing overflows before deciding on the rain gardens. An underground storage tank was discussed, but the county decided rain gardens would be a better option because they would remove the stormwater from the sewage system altogether, rather than simply delaying its release, and would also cost a lot less.

State regulations limit such sewage overflows to no more than one overflow incident a year. The county hopes the rain gardens can achieve that, and reduce pressure on the sewage treatment systems at the same time.

Members of the 12,000 Rain Gardens project have worked with several municipalities in the Puget Sound to install the landscape features. It is their goal to put in 12,000 of the gardens in the Puget Sound region by 2016. They believe the most effective and efficient way of achieving that goal is by installing clusters of rain gardens, such as in the Everett and proposed West Seattle projects.

The benefits of a rain garden don’t end with the environment, said David Burger, executive director of Stewardship Partners. He said they can also increase property values and the beauty of a home.

He said the Ballard incident shouldn’t be considered representative of rain garden projects in general: “When you look at the number of rain gardens in Puget Sound, (problematic ones are) a very small percentage.”

Burger estimates there are 900 to 1,000 rain gardens in the Puget Sound region. The 12,000 Rain Gardens website lists more than 700 that have registered with the organization.

For Burger, untreated runoff is the number one environmental issue in the country.

“We came into the natural environment and modified it,” Burger said. “We put water in a pipe; out of sight, out of mind. Now we’re rethinking the way we manage water.”