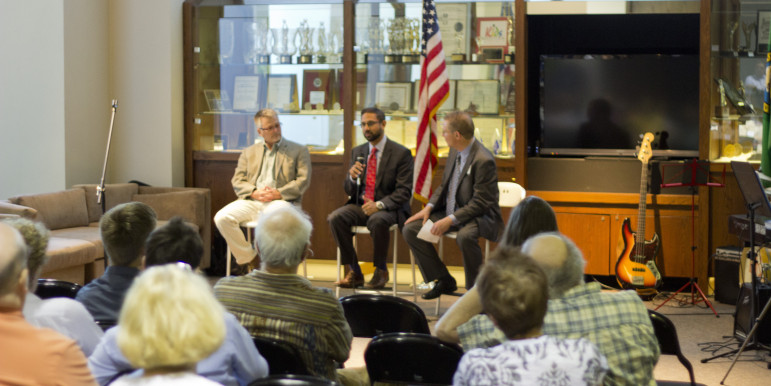 InvestigateWest offers a new nonprofit model for watchdog journalism that enriches our community. We invest in original reporting — on public health, the environment, and government accountability — and produce powerful stories with a clear bearing on public policy.

By partnering with commercial media and public broadcasters, we create new opportunities for individuals and teams of journalists to take on ambitious reporting assignments and learn new skills.

As a mission-driven organization, we strengthen communities, engage citizens in civic life, and help set the policy agenda in the Northwest by producing powerful, independent investigative and explanatory journalism.

InvestigateWest was founded in 2009 after the Seattle Post-Intelligencer newspaper stopped publishing. Ever since, we have worked to establish a nonprofit model for public-service journalism where none existed before, publishing dozens of in-depth stories every year that reach an audience of millions.

We publish original reporting and tools here on our website that equip the public to participate in our democracy and collaborate with other news outlets to pursue consequential journalism. Our dozens of partners include The New York Times, KING 5 Television, Crosscut, KUOW Public Radio, The Portland Tribune, Willamette Week, Seattle Weekly, KCTS 9 Television, and many, many more.

The case for support

For a century, nearly all the original reporting in the U.S. happened at newspapers. Then starting in 2008, an estimated $4 billion disappeared from newsroom payrolls — including more than 1,500 newspaper jobs in the Pacific Northwest.

Against that backdrop InvestigateWest is pioneering a powerful new nonprofit  news model to educate and equip the public on consequential issues. We participate in bold ideas, like crowdfunding statehouse reporting, to create a new market for investigative journalism and we are asking for public investment to help us grow.

Since 2009, InvestigateWest’s journalism has directly led to a healthier, safer and more transparent Pacific Northwest, including two first-in-the-nation state laws to protect the environment and workers’ health.

See some of the ways our journalism has made an impact »

Our journalism has also won dozens of state, regional and national journalism awards since we began publishing. Our work and our staff have been honored for exceptional reporting, technical innovation, and creative storytelling.