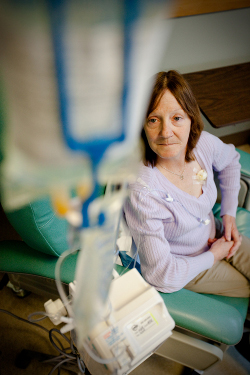 Secondhand chemo – like secondhand smoking – is an apt description for disease that occurs after chronic exposure to low doses of a drug intended for someone else. And like secondhand tobacco exposure, it can have deadly consequences.

An InvestigateWest investigation has found that the federal Occupational Safety and Health Administration does not regulate exposure to chemotherapy in the workplace, despite multiple studies documenting ongoing contamination and exposures and their potentially deadly consequences for human health. Studies as far back as the 1970s have linked increased rates of certain cancers to nurses and physicians. Occupational health experts believe that’s because when nurses, pharmacists,technicians and increasingly, even veterinarians, mix and deliver the drugs, accidental spills, sprays and punctures put  them in close, frequent contact with hazardous drugs. These are drugs that can save lives of cancer patients, but ironically, are also human carcinogens themselves.

A just-completed study from the U.S. Centers for Disease Control, 10 years in the making and the largest to date, confirms that chemo continues to contaminate the work spaces where it’s used, and in some cases is still being found in the urine of those who handle it, despite knowledge of safety precautions.

Read the story of Sue Crump, a Seattle area pharmacist who died at age 55 of cancer she believed was linked to her years as a pharmacist mixing chemotherapy in hospital settings. Her story is just one uncovered in a year-long investigation by InvestigateWest’s Carol Smith that drew upon early studies showing links between workplace exposures and later disease, slow recognition that the drugs have long lasting and even lethal consequences, and a reluctance to meet the problem with strict workplace safety regulation, at the federal and state levels.

While safety awareness has improved, the most basic precautions remain recommendations only, even as federal scientists and occupational health experts have pushed for more regulation in the work place.

Most alarmingly, the toxic drugs that some pharmacists and nurses believe caused cancer years later are moving out into home health care, veterinary clinics and non-hospital clinic settings where the deadly consequences of exposure may be even less recognized.

Our full story appears below. It was also published by The Seattle Times and MSNBC.com,  and a broadcast investigation was produced in partnership with  KCTS 9.

This images used in this presentation of Sue Crump and her daughter Chelsea were made by photographer Paul Joseph Brown for InvestigateWest. Photographer Mike Kane shot the video of Sue and her family for Investigate West. The video/slide show was produced by Daniel Gawlowski of The Seattle Times.

Sue Crump braced as the chemo drugs dripped into her body. She knew treatment would be rough. She had seen its signature countless times in the ravaged bodies and hopeful faces of cancer patients in hospitals where she had spent 23 years mixing chemo as a pharmacist.

At the same time, though, she wondered whether those same drugs – experienced as a form of “secondhand chemo” — may have caused her own cancer.

Chemo is poison by design. It’s descended from deadly mustard gas first used against soldiers in World War I. Now it’s deployed to stop the advance of cancer.

In the United States, there’s a lot of discussion about the difficulties of requiring hospitals and clinics to prove they are not contaminating their workers with toxic drugs.

But some other countries are already doing that.

Oncology pharmacist Bruce Harrison died at age 59 of a rare form of cancer. He was one of the authors of the strictest set of guidelines yet for healthcare worker safety, guidelines that had they been mandatory may have saved his life.

A diagnosis of thyroid cancer at age 35 changed vet Brett Cordes’ life. Now he’s a safety crusader warning other vets that the stuff they’re using to save our pets’ lives could be threatening their own.

Luci Power was one of the first pharmacists in the United States to pressure her employer to take seriously warnings about chemo handling coming out of Europe in the early 1980s. Read how one activist changed a workplace.

Hospital pharmacist Karen Lewis once had a cavalier attitude toward gloving and face masks, believing a little exposure wouldn’t harm her. Four years after being diagnosed with a pre-cancerous blood disease, she knows differently.

Q & A with Jordan Barab, Dep. Asst. Secretary of Labor for OSHA

We asked what the agency charged with protecting American workers is doing to protect healthcare workers on the job.

Sue Crump, In Her Own Words

Behind the Scenes at Swedish Hospital