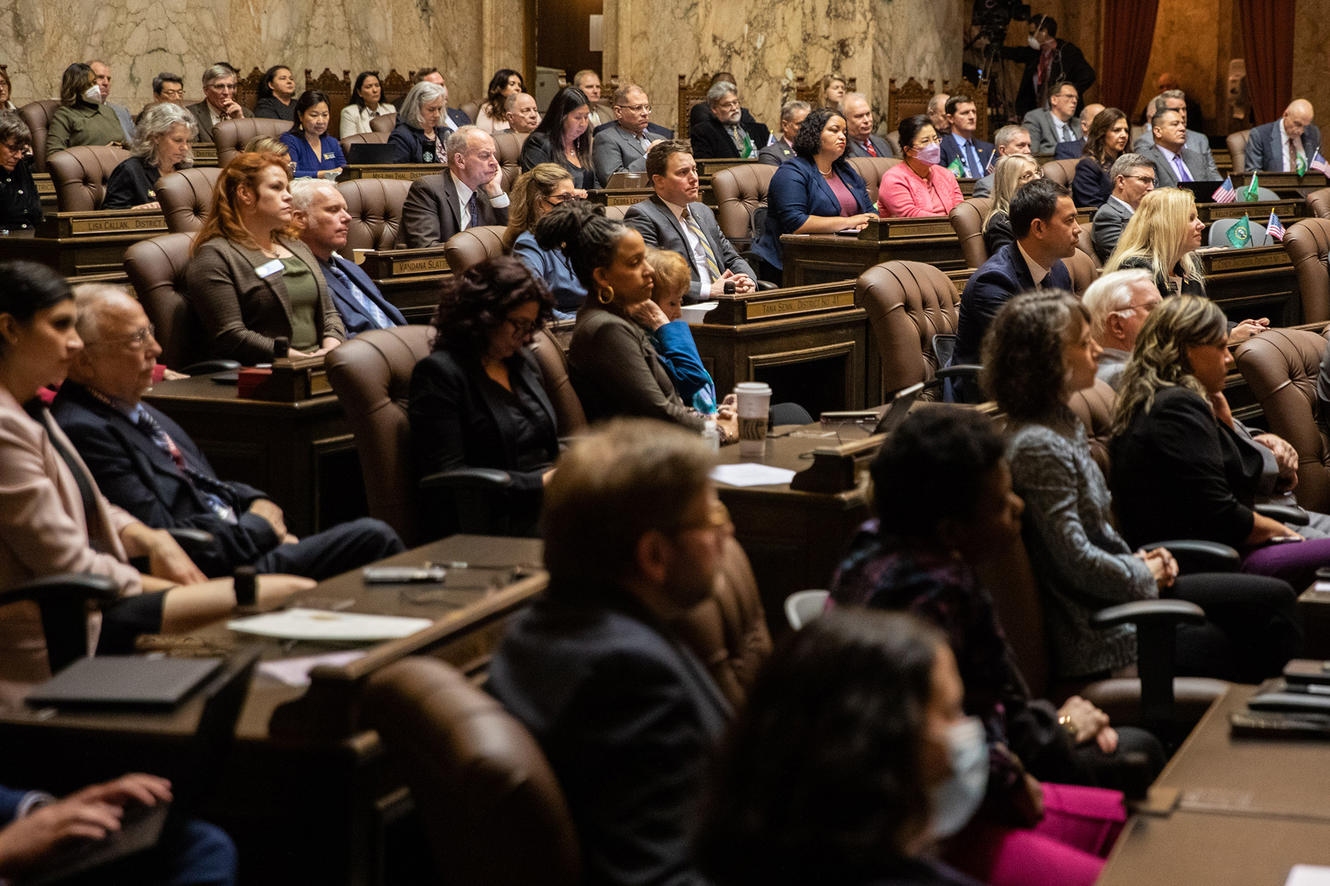 Some WA lawmakers are sidestepping the state’s Public Records Act

By Joe O'SullivanJanuary 12, 2023No Comments

Despite a 2019 state Supreme Court ruling, legislators are shielding documents by claiming a loophole of ‘legislative privilege.’

In 2019, the state Supreme Court ruled that lawmakers had been violating Washington’s Public Records Act for years by unlawfully withholding disclosable documents, such as lawmaker calendars and emails.

But what seemed to be settled law at the time remains a point of contention between legislators and the public, and the journalists working on their behalf.

The Supreme Court ruling in Associated Press et al. v. Washington State Legislature et al. – which came after a coalition of media organizations sued – essentially found that for years, legislators had unlawfully claimed themselves exempt from the 1972 voter-approved transparency law.

But even the highest court in the state can’t stop legislators from hiding documents they don’t want to show the public.

Over the past year, lawmakers have begun asserting what they call “legislative privilege” to again withhold or redact documents like emails. The phenomenon was first reported by McClatchy, which owns the Tacoma News Tribune and The Olympian.

At an annual legislative preview last week, legislative leaders generally defended the practice, with some arguing that they have a constitutional right to it.

“Legislative privilege is an exception from public records that’s actually grounded in the constitution, not in statute,” said Rep. Laurie Jinkins, the Democratic House speaker.

She contended that each individual legislator can assert a privilege to withhold documents, meaning an email between two lawmakers might be considered exempt from disclosure by one member and a public record by the other member.

Staff attorneys for the House of Representatives searched more than 26,000 records for 2022 from both Democrats and Republicans, according to a spokesperson for Jinkins. That review found 24 requests with redactions for legislative privilege.

Advocates for open government, as well as the attorney involved in the 2019 Associated Press lawsuit, however, have said they don’t believe an exemption exists.

On Monday, public records advocate Arthur West filed a complaint against the Legislature and Democratic and Republican leaders in Thurston County Superior Court. West’s lawsuit alleges, among other things, that lawmakers are violating the 2019 court ruling.

Additionally, lawmakers could face further penalties in the 2019 public records case – part of which is still being resolved in that same Thurston County court – for withholding the new records, according to Michele Earl-Hubbard of Allied Law Group.

In an interview, Earl-Hubbard, the attorney for the media organizations on that case, said Thurston County Superior Court Judge Chris Lanese could potentially grant penalties against lawmakers for their latest moves.

“That can clearly come back and bite them in a penalty motion,” said Earl-Hubbard, a board member of the Washington Coalition for Open Government, who was speaking for herself. Such a motion, she said, is “to deter future action, to make other agencies comply.”

“And to me, the Legislature and legislators have illustrated they have not yet gotten the message,” she said.

House Chief Clerk Bernard Dean declined to comment on those cases, writing in an email that he hadn’t yet seen the complaint by West, and that the House generally does not comment on litigation. He added that legislative privilege is considered a concept in at least 43 other states.

In an email, Secretary of the Senate Sarah Bannister cited a 2006 Snohomish County Superior Court ruling that the Legislature believes justifies the new practice.

Legislative attorneys are using that decision, known as Washington State Farm Bureau v. Gregoire, “when determining whether or not evoking legislative privilege is appropriate,” according to Bannister.

“Now obviously a higher court has not weighed in on legislative privilege in this state, but courts in many other states have appellate cases that are consistent with the attached opinion,” Bannister wrote. “If at some point an appellate court in this state has a different interpretation we will, of course, follow it, but for now, this is the only comprehensive guidance we have from any court on this topic.”

A historic lack of transparency

For years, Washington lawmakers claimed they were exempt from the state’s 1972 voter-approved statute requiring government and elected officials to disclose swath of documents, from emails and memos to official calendars.

A coalition of news organizations sued the Legislature to challenge that exemption, and that case, Associated Press et al., resulted in a partial victory in 2019. The state Supreme Court found that lawmakers’ offices were subject to disclosure, but the House and the Senate as institutions were not.

Lawmakers are now withholding records by claiming Article II, Section 17 of the state Constitution. Titled “Freedom of Debate,” it is  a one-sentence provision which reads: “No member of the legislature shall be liable in any civil action or criminal prosecution whatever, for words spoken in debate.”

In her view, Earl-Hubbard said that neither of those citations would give them the power to shield records.

“They’re citing completely inapplicable laws that do not apply to the records they’re citing,” she said.

“I was the lawyer who handled the Gregoire case and the Freedom Foundation, and it was all about the idea, about the executive privilege case at the federal level,” added Earl-Hubbard. “And can that privilege apply to a governor as a chief executive. It was a very, very specific argument for a chief executive.”

Gov. Jay Inslee himself vowed long ago not to invoke executive privilege given to him by the court decision. The governor later vetoed a bill by the Legislature exempting itself from the Public Records Act before the legal challenge by news organizations reached the state Supreme Court.

Asked about his decision at the legislative preview, the governor called transparency an “important issue” and encouraged the lawmakers to be transparent.

“We have, in the executive branch, demonstrated that we can be effective in leading the state while also being as transparent as possible,” Inslee said, adding: “I hope legislators can achieve the same result, I do think it’s important.”

In his response during the legislative preview, House Minority Leader J.T. Wilcox, R-Yelm, was skeptical of the concept. He has searched through his own records in recent years, Wilcox said, as they get requested for public disclosure.

“It can be a little arduous sometimes,” said Wilcox. “But it’s never once occurred to me that, ‘Oh, there must be some reason I can find that I shouldn’t turn this over if it is responsive to the request.”

“And so the idea that things that are difficult can be concealed, seems counter to what … the whole PRA debate was all about a few years ago,” Wilcox added.

The return toward secrecy is worrying to advocates of open government.

“The public needs to know what its government is doing,” said George Erb, secretary of the Washington Coalition for Open Government. “In our view, this is just the Legislature’s latest attempt to rewrite itself out of the state’s transparency laws.”

Jason Mercier of the Washington Policy Center has spent years filing public disclosure requests. He’s now among those who have received redacted records claiming legislative privilege. After so many battles over public disclosure, the latest revelations left him “numb.”

“When I got the redactions, I was like, there they go again,” said Mercier.

Among the documents Mercier has requested are those concerning internal discussions about the tax on capital gains passed by the Legislature in 2021. Democrats have described it as an excise tax, and that’s an important distinction in a state where a state income tax was long ago found unconstitutional. The state Supreme Court later this month will hear arguments to a legal challenge on whether the capital gains tax is constitutional.

It’s valuable for the public to see how lawmakers talk about issues behind closed doors, Mercier said, to better understand where they’re coming from. Previous records obtained by Mercier show at least one lawmaker acknowledging that the capital gains tax was expected to be challenged before the state Supreme Court.

“I wanted to know what are they telling themselves, what do they think they know,” he said.

Earl-Hubbard said she thinks the legal advice given to lawmakers to justify legislative privilege “is completely wrong.”

“And it looks like they’re just trying to find another excuse to hide their actions from the public,” she added.