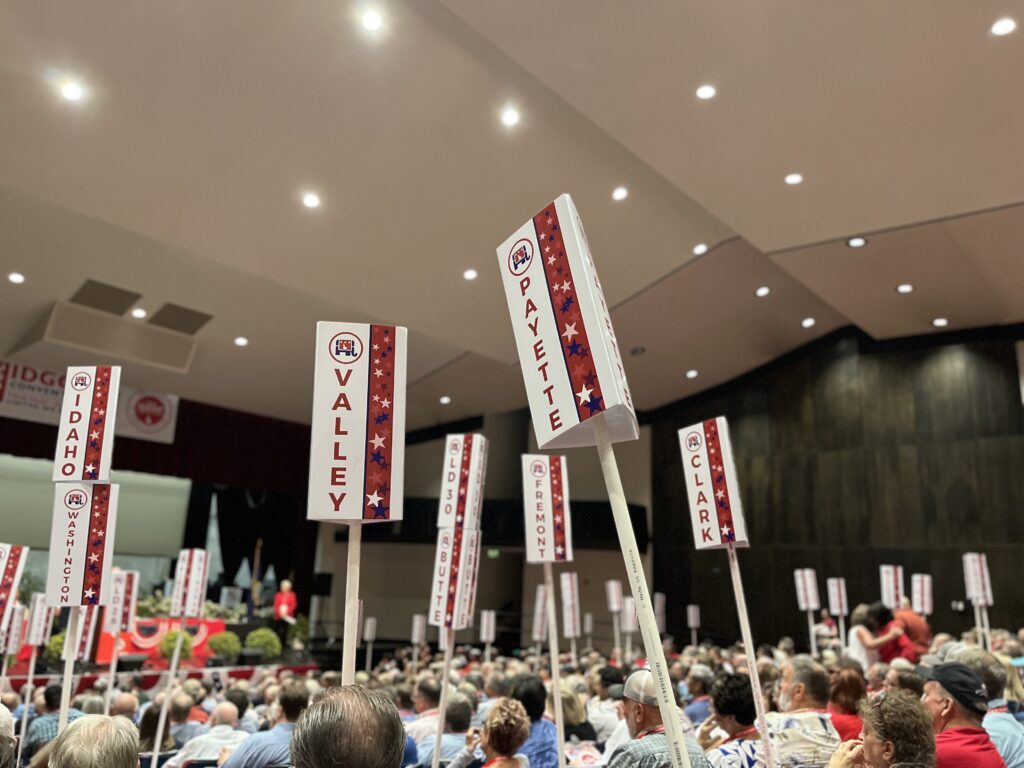 The Idaho Republican Party’s State Central Committee will consider several changes to its rules over the weekend at its 2023 winter meeting, including a policy that would allow the party’s committee members to question the conduct of a Republican elected official and consider punishment for deviating from the party platform.

The Idaho Republican Party’s state central committee will meet from 4-7:30 p.m. Jan. 6 and from 8 a.m. to 7 p.m. Jan. 7 at the Riverside Hotel in Garden City to consider changes to the party rules, including some that were recommended by GOP convention delegates in July. While the convention is made up of about 750 delegates and party officials, the state central committee is a smaller group of 240 people, including the state executive board, county chairs, state and youth committee members and legislative district chairs.

The party platform enforcement rule was submitted by Benewah County State Committeeman Hari Heath and Shoshone County Chairwoman Linda Yergler. Heath and Yergler could not be reached for comment.

The rule states that the support of the Idaho Republican Party is beneficial to candidates, and those who pledge to uphold the party platform when running for office should be held accountable while in office.

“Without enforcement, the expressed policies and principles of the party are nothing more than ideals and philosophy,” the rule states. “Republican legislators have, at times, defied their pledge and oath, voting on legislative matters substantially contrary to the party’s expressed policies and principles. Republican executive officers also have, at times, conducted their offices contrary to Republican and constitutional principles.”

After allowing the official to explain their actions, the respective committee members could vote with a simple majority to censure the elected official on the first offense. For subsequent offenses, the rule states, 60% of committee members could remove party support and prohibit the candidate from using Republican Party identifiers on any campaign literature or advertising for a period of five years.

“The Idaho Republican Party has a proprietary interest in its name, logos, party identifiers and the support it gives to Republican candidates,” the rule says. “Candidates do not have an independent right to make use of the same.”

Bingham County Republican Central Committee Chairman Dan Cravens called the proposal outlandish, saying there are several things in the Republican platform that not every Republican supports, such as the idea of returning to the gold standard of currency.

“That would just be ridiculous, and it would be very damaging to the brand of the Republican Party,” Cravens said. “And it’s something voters would have no patience for.”

Cravens said the proposal, along with a rule regarding crossover voting that the party will also consider at the winter meeting, place little trust in the Republican electorate in picking their own candidates. He hopes voters will reach out to state central committee members like himself with their thoughts about the ideas.

Idaho Republican legislators from across the state react to proposed rules

Five Idaho legislators issued a letter Tuesday stating their opposition to two other rules that will be considered at the winter meeting — one that is intended to prohibit some voters who have affiliated with or donated to other parties within the past two years from participating in the Republican primary, and one that would strip young Republicans and Republican women organizations from having a vote on the state executive committee.

There are currently 18 members who can vote on action items related to the party’s budget and other executive functions. That number would drop to 15 without the three group’s votes, although they would remain “ex-officio” members.

“Across the nation, Republicans continue to lose ground to Democrats by a 3:1 ratio with the younger generation. If we continue to play this out over the next 10 years, the forecast is bleak for Republicans if we do not reverse this trend,” the letter said.

The letter states that most first-time voters in Idaho register as Democrats or independents because Democrats have an effective ground game, but groups like the Young Republicans and College Republicans have been able to convince those voters to switch to the Republican Party.

“By placing a 25-month restriction for Republican affiliation, the current rule will effectively eliminate any success made on campuses, churches and in our communities with students and young families,” the legislators wrote. “We are essentially telling our young voters they are not able to participate in our primaries for potentially up to four years. We agree that crossover voting is a serious issue, but there are commonsense amendments that can be made to stop blatant occurrences without impacting honest, new Republican voters.”

The letter added that by removing the voice of those young Republican organizations from the state executive committee leadership board, the party is taking away any remaining opportunity for those groups to influence the party.

“It takes effort to keep younger voters engaged. We can attest to that as five Young Republican legislators,” the letter said. “… We strongly recommend the Idaho Republican Party State Central Committee vote down these proposed rule changes as written or amend them to something that makes sense.”

Idaho Federation of Republican Women President: Women are the workers of this party

Tracey Wasden, president of the Idaho Federation of Republican Women, said she has emailed nearly 100 of the 220 state central committee members telling them to reject the proposal that would strip the organization’s vote from the executive committee. Wasden, who is married to former Idaho Attorney General Lawrence Wasden, was elected president by the federation in September and said she thinks the move is partially meant to target her personally because of political differences between herself and others on the board. She said it is a short-sighted disservice to Idaho Republican women.

“Truly, the women are the workers in this party,” Wasden said. “We are the worker bees; we are the people who get it done. (Most) men aren’t out there running everything and setting up everything and organizing every meeting. … We are also the people who at the same time are raising families and teaching our children these Republican values, and we are also serving our communities and our churches. We are trying to do good in lots of different places.”

Wasden said the primary argument she has heard for removing the organizations’ votes is that they were not elected by the party delegates. Wasden said she may not have been elected by the delegates, but she was elected by 125 delegates of the roughly 850 Republican women in clubs across the state. Even if the federation still has membership on the board, without a vote, their voice doesn’t have any power, she said.

“What women think matters. Everyone should want that perspective of a woman. We have a very valuable thought process that we need to be able to share with other people,” Wasden said.

Of those she has contacted, few have expressed a willingness to vote against the rule change, Wasden said, but that won’t stop her from trying to defeat it.

FEATURED IMAGE:  The Idaho Republican Party’s State Central Committee will consider several changes to its rules over the weekend at its 2023 winter meeting, including a policy that would allow the party’s committee members to question the conduct of a Republican elected official and consider punishment for deviating from the party platform. (Kelcie Moseley-Morris/Idaho Capital Sun)

Jacob Fries is executive director of InvestigateWest. Previously, Fries spent more than a decade leading the Inlander, a Spokane-based weekly paper covering the Inland Northwest that’s become a regional powerhouse for narrative and accountability reporting. A Pacific Northwest native, he also worked as a reporter at the Tampa Bay Times and the New York Times, and his work has appeared in numerous publications, including the Seattle Times, the Denver Post, and the Boston Globe. Reach him at jacob@invw.org.