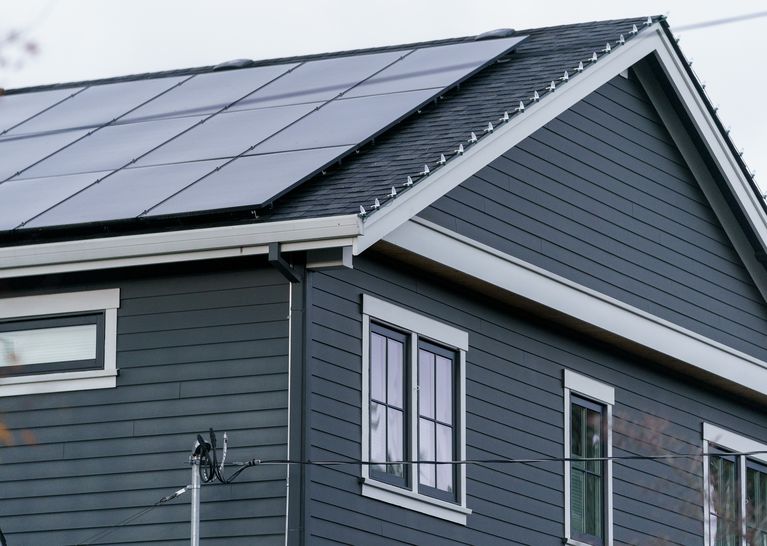 By Monica SamayoaDecember 19, 2022No Comments

One person’s dream home might be a villa on the shore of Italy’s Lake Como, while another’s is a clifftop mansion overlooking the Pacific Ocean. Will Musser’s is a house that blends in with his Portland neighborhood.

“It’s comfortable, not ostentatious or kind of extravagant,” Musser said. “It’s pretty much got everything that I want.”

Musser’s dream home is equipped with solar panels, an electric water heater, a smart electric panel, an induction stove, an electric vehicle charger and a battery storage system. Upgrading the house to minimize the Musser family’s carbon footprint — their dependence on fossil fuels that contribute to climate change — took over a year to complete and cost about $50,000.

Musser is a climate change and sustainability advocate. He hopes his retrofitted house will serve as an example for how other early adopters can transition their homes to 100% electric power without trying to get off the grid or live an ultra-sustainable lifestyle.

“It’s just lowering your carbon footprint and maximizing livability and comfort,” he said.

But there’s one thing keeping his home from operating entirely on carbon-free energy: the power grid that it’s connected to. Except when its energy is coming from the rooftop solar panels or the battery storage system connected to an outside wall, it’s powered by whatever mix of electricity the utility company is delivering.

That means a combination of carbon-free energy from hydroelectric dams and wind farms and electricity from power plants that burn natural gas and coal. Now, as more policymakers, companies and individual Oregonians are beginning the transition to 100% clean electricity, more attention is shifting to the power grid — usually a more out-of-sight and out-of-mind piece of the puzzle.

The grid is like a giant machine made up of generation facilities, transmission and power lines, transformers and substations. It takes all those moving parts to deliver energy from source to electrical socket. Experts say it needs to be modernized to be able to handle the clean-energy transition.

But updating the power grid isn’t as easy as flipping a switch. It takes coordination from utilities, federal and state agencies and other players to update and build out the miles-long, state line-crossing grid.

The transition to 100% renewable energy

Recently, researchers from around the world released a report that warned if greenhouse gas emissions are not drastically curbed, the world could see catastrophic climate disruptions by 2100. So far this decade, Oregon has faced longer and more intense wildfire seasons, drought, and an extreme heat event that killed dozens in June of 2021 — all linked by scientists to climate change.

In response to what is increasingly seen as a climate crisis, Oregon state lawmakers adopted House Bill 2021, which requires utilities to eliminate their greenhouse gas emissions associated with electricity they provide by 100% by 2040.

The law has set the state on a course to meet one of the nation’s most ambitious climate goals. Adam Schultz, the Oregon Department of Energy’s electricity and markets policy group lead, said so far Oregon is doing fine in meeting those goals but there is more work to do to get more renewable energy in the system to replace what’s being produced from burning fossil fuels.

“We still have certainly quite a bit of fossil, mostly natural gas, some coal still powering Oregonians’ homes,” he said.

According to the Oregon Department of Energy’s 2020 data, hydroelectricity is the state’s main source of electricity. But natural gas — mostly made up of the potent greenhouse gas methane — has become one of Oregon’s fastest-growing energy resources in the past decade. The state’s use of natural gas has doubled since 2012. Power from natural gas-fired energy plants make up about 22% of the state’s electric use.

Oregon’s share of energy from wind and solar has steadily increased over the past decade. At the same time, electricity from burning coal has declined. The single biggest reason for this is that Portland General Electric shut down Oregon’s last coal plant in 2020, replacing it with an innovative wind, solar and battery facility near Boardman in Eastern Oregon.

Coal continues to power many homes and other buildings in Oregon because some utilities are still bringing in electricity powered by out-of-state coal-fired plants.

“The key pathway that we need to unlock in the two decades ahead is really figuring out to what extent storage is going to play a significant role in adding that flexibility to our grid,” Schultz said.

The Northwest’s power grid will also need to modernize and expand its transmission lines to move renewable energy from where it’s being generated to where it’s needed, he said. That includes wind and solar farms in Oregon and other states — and potentially offshore wave and wind energy.

“We know we’re going to need more transmission,” she said. “But there’s no plan in place right now for building out the transmission we need or even identifying how much of it we need and where it should go.”

The Bonneville Power Administration operates about 75% of the Pacific Northwest’s transmission lines, including critical corridors from east to west across the Cascade Mountains.

Moore said because of that, BPA, regulators like the Oregon Public Utility Commission and policymakers should quickly and cooperatively come up with longer-term plans and policies for meeting clean-energy goals.

NorthernGrid, a membership organization that includes BPA and 11 utilities in the region, is tasked with developing a 10-year regional transmission plan. Moore said that needs to be extended to 20 years to better plan out transmission routes.

“The clock is ticking on climate action and transmission lines are notoriously difficult to build and take a very long time — from 10 to 20 years — to build a new line,” she said.

Jeff Cook, a BPA vice president who oversees transmission engineering and technical services, said it would be too generous to say the region is ahead of the game when it comes to modernizing the grid’s transmission.

“I think we are right in the middle of the game and we need to be proactively looking at where to add these transmission lines,” he said.

One reason transmission-line modernizing takes so long is the time required for public input and environmental review before permits can be issued. The proposed Boardman to Hemingway transmission line, Cook said, is a case in point.

“It started in 2007 and a shovel hasn’t hit the ground yet,” Cook said. “So, it is a long process in order to build these lines.”

Constructing the Boardman to Hemingway line across nearly 300 miles of eastern Oregon and southwestern Idaho is expected to begin in 2023.

‘We are on the cusp’

Despite the clean-energy transition’s many challenges, modeling from the Clean Energy Transition Institute, a nonprofit research and analysis organization, suggests Oregon could meet its first hurdle for emission reduction targets. That would mean removing coal from the state’s electricity mix and replacing it with clean resources, while also reducing energy consumption.

Executive Director Eileen V. Quigley said the institute is researching additional steps toward cutting carbon from the energy mix, including what she called “deep decarbonization pathways” — the process of reducing carbon emissions as much as possible from all sectors of the economy.

Quigley said it’s not realistic to expect Oregon’s energy mix to be 100% carbon-free right at this moment, but it should be able to get there over the next two decades.

“So, I think that’s probably one of the most important points to make to people,” she said. “We are talking about a transition. Things need to change over time.”

Quigley said she is seeing a clear consensus on climate change and its consequences, and that is helping shift the conversation on carbon-free power and energy conservation.

“I really feel like we are on the cusp of finally cracking many, many difficult barriers to this transition,” she said.

As for Portland homeowner Will Musser, he’ll continue to open his home for those curious about how they can transition to a less carbon-polluting lifestyle. Musser said he understands not everyone can afford to make the same upgrades he did; the cost of some appliances and retrofits are still high, despite rebates and other incentives offered to make the switch.

Musser said he will keep learning more about what he can do to help move this forward, so the clean energy transition can benefit all communities.

“Everybody has to do this, or will have to,” he said. “We have to do this, especially for residences, if we’re going to meet our climate goals and basically have a livable habitat for the next several hundred years.”

FEATURED IMAGE: The rooftop solar array on a south-facing roof, at the home of Musser’s Portland home. (Kristyna Wentz-Graff / OPB)