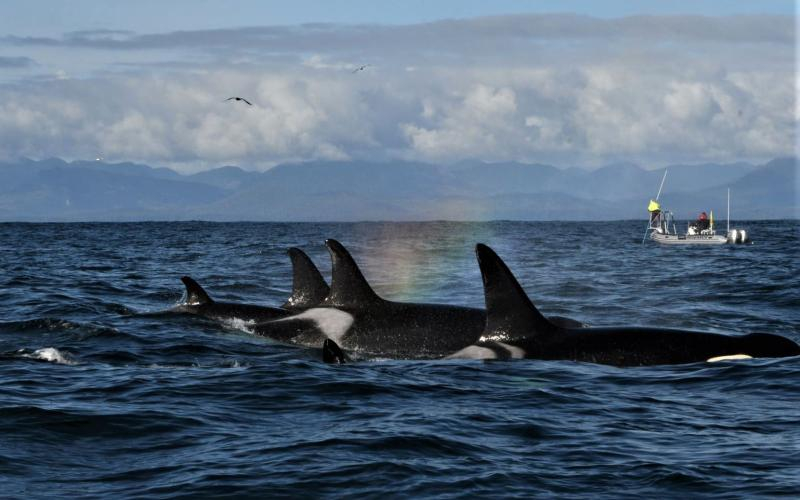 By Katie SurmaDecember 13, 2022No Comments

The moves are the latest developments in the “rights of nature” movement gathering momentum in countries around the world, including the U.S. With only 73 of the orcas of the Salish Sea still in existence, time is of the essence.

By Katie Surma, Inside Climate News

This article originally appeared on Inside Climate News, a nonprofit, independent news organization that covers climate, energy and the environment. It is republished with permission. Sign up for their newsletter here.

Gig Harbor, Washington, on Dec. 5 became the second city in the Pacific Northwest region to proclaim that Southern Resident Orca whales have legal rights. A week earlier, Port Townsend, Washington, made the same proclamation, marking the first time a U.S. city council has made such a recognition.

“The rights of the Southern Resident Orcas include, but are not limited to, the right to life, autonomy, culture, free and safe passage, adequate food supply from naturally occurring sources, and freedom from conditions causing physical, emotional or mental harm, including a habitat degraded by noise, pollution and contamination,” both towns’ non-binding proclamations say.

Issuance of the document represents the latest development in the “rights of nature movement” which recognizes that nature and all of its constituent parts—including wild animals, mountains, forests and rivers—possess inherent legal rights similar to humans.

The resolutions, which were supported by the towns’ city councils and mayors, also recognized that existing legal protections for the whales have proved inadequate.

Despite the orcas being protected by the Marine Mammal Protection Act and listed under the Endangered Species Act in 2005, the population of Southern Resident Orcas, also known as Salish Sea orcas, has been in decline. Only 73 individuals remain in the wild, down from a recent high of nearly 100 whales in the mid-1990s. Scientists say the Southern Resident Orcas face threats from persistent pollution, noise from boat traffic and decreases in Chinook salmon populations, which is the orcas’ primary food source.

An additional Southern Resident Orca has been held in captivity at Miami Seaquarium since 1970 after being taken from the Salish sea. The orca, known as Sk’aliCh’elh-tenaut by the Lummi Indigenous peoples, has been the subject of a long-running campaign by the Lummi and others to reunite her with her family pod in the wild.

For Kriss Kevorkian, the founder of Legal Rights for the Salish Sea, recognition of the rights of the Southern Resident Orcas is a step towards reorienting humanity’s relationship with nature and moving toward the reality that humans are part of nature.

“We have a responsibility to protect the Southern Resident Orcas,” Kevorkian said. “We can’t let them die on our watch.”

Because the Southern Resident Orcas resonate so strongly with people in Washington and around the world, Kevorkian said, she is hoping that the Port Townsend and Gig Harbor resolutions will inspire recognition of the rights of the orcas, and nature in general, at the state level in Washington.

If the rights of the Southern Resident Orcas make it into legally binding law, it would provide the orcas with legal standing to defend their rights in court, which is typically done through a guardian process where individual humans or organizations act on behalf of the orcas’ best interests.

Southern Resident Orcas, a unique and endangered population of killer whales endemic to the coastal area of Washington state and Vancouver, Canada hold cultural significance for many Indigenous peoples in the Pacific Northwest. In 2018, one of the orcas, known as Tahlequah, captured international media attention when she refused to abandon her stillborn child, carrying the calf through the water for 17 days. Pods of orcas have unique cultural, social and physical characteristics and, like humans, they are sentient beings, have individual personality traits and display affection, grief and playfulness, scientists have determined.

Tahlequah’s story inspired Port Townsend residents and a coalition of local organizations to propose that the city recognize the orcas as rights-bearing beings. Elizabeth Dunne, a Washington-based lawyer with the Earth Law Center who worked on the campaign, said the proclamation, while not legally binding, moves away from existing legal and economic systems that view the orcas as objects and property that humans can own and destroy.

“In this country, recognizing the rights of nature may seem like a bold move, but around the world, it’s not,” Dunne said. “In other countries that already recognize these rights, it is part of a redesign of their legal systems.”

Around the world, at least 39 countries and Indigenous nations have judicial rulings or some form of legislation recognizing the rights of nature. In Ecuador, where there is constitutional recognition of the rights of Pacha Mama, or Mother Earth, the laws have been used to block exploratory mining projects in fragile ecosystems and to require the restoration of a damaged river.

Researchers estimate that there are over 400 initiatives in the works around the world to advance the recognition of nature’s rights. Separately, legal systems around the world from New Zealand to the United Kingdom and Spain have increasingly recognized that animals have the capacity to experience feelings and sensations, including suffering.

In the United States, local communities across the country have enacted laws or otherwise taken steps to recognize the legal rights of nature. But, those laws have faced obstacles that have kept them from being enforced as a result of legal precedents at the state level that subordinate, or preempt, local government laws to state legislation.

A court in the U.S. has yet to uphold a rights of nature law.

While the rights of nature movement began with passage of a local ordinance in Tamaqua, Pennsylvania, in 2006, Dunne said that corporate influence over lawmaking has slowed the growth of the movement in the United States.

Rights of nature advocates often point out that most existing legal systems treat nature as property while affording corporations many of the same legal rights as humans, including rights to due process and free speech. That imbalance is why certain sectors of the business community have defended the status quo and worked to block initiatives, including laws recognizing the rights of Lake Erie and the rights of waterways in Orlando, Florida, Dunne said.

“Corporations engaged in extractive industries feel threatened by the idea that nature has rights,” she said, “because it means businesses will need to better account for what their impacts on the environment are as opposed to a system that allows them to get permits that allow them to pollute.”