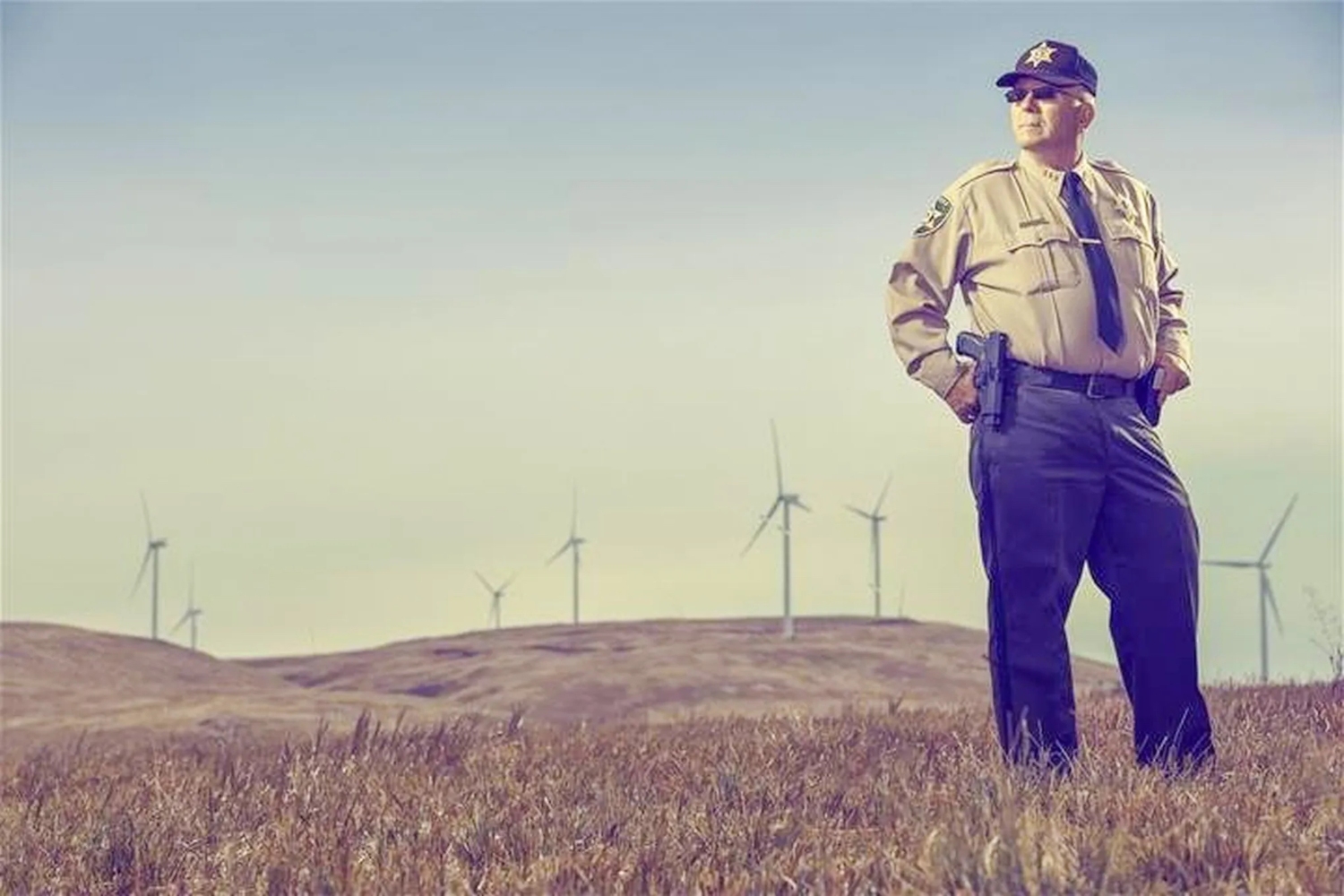 By Wilson CriscioneNovember 3, 2022No Comments

Four years ago, many of Washington state’s sheriffs were unhappy with a voter-approved gun safety law that required stronger background checks and raised the age to buy a semi-automatic rifle.

Thirteen sheriffs, however, went a step beyond merely expressing their displeasure. They announced they would defy the new gun laws because, in their interpretation, it violated the U.S. Constitution.

“I will follow the rule of law,” Klickitat County Sheriff Bob Songer said at the time, “when I believe it’s constitutional.”

For Songer, it was a tipping point. Not only did it get him on far-right conspiracist Alex Jones’ show, but his stance caught the attention of the Constitutional Sheriffs and Peace Officers Association, a far-right, anti-government group that wrongly asserts a sheriff’s power supersedes that of state and federal authority. In 2019, they awarded Songer the Washington State Constitutional Sheriff of the Year Award.

While only about 300 out of more than 3,000 sheriffs in the country are official members of the Constitutional Sheriffs and Peace Officers Association, nearly half of sheriffs nationwide who responded to a survey by The Marshall Project said they believe their power outranks federal or state government in their county. Other sheriffs or candidates for the office may not believe their authority is that powerful but are still willing to disregard a law based on its perceived constitutionality.

Sheriffs have some discretion when enforcing laws, but they do not have the power to decide what is constitutional like the judicial branch. That many sheriffs believe they have that power concerns people like Rupa Bhattacharyya, special litigation counsel for the Institute for Constitutional Advocacy and Protection within Georgetown University Law Center.

It’s not just worrisome because they may decide not to enforce laws they disagree with. Bhattacharyya said the worst case scenario would be if these sheriffs are emboldened to meddle with the elections process. Already, 2020 election deniers are recruiting county sheriffs to more closely watch over future elections.

“These few, vocal sheriffs who have gone a little bit rogue are very concerning,” she said. “Because there’s not a great way to hold them accountable, other than by not electing them.”

The Constitutional Sheriffs and Peace Officers Association was founded in 2011 by Richard Mack, a former sheriff in Arizona who believes “the greatest threat we face, as a nation, is our own federal government.” The organization was opposed to the Obama administration’s gun initiatives and promised its members wouldn’t enforce policies they thought violated the Constitution.

More recently, Mack and the association have been focused on resisting COVID mandates and encouraging sheriffs to investigate unfounded conspiracies about the 2020 election. The Anti-Defamation League considers the organization an “anti-government extremist group.”

Songer has been a prominent voice for Mack’s group after Mack celebrated his stance on Washington’s gun laws. In May, the group listed Songer as a “sheriff committed to investigating election fraud” and quoted Songer saying he was convinced there was widespread voter fraud in the 2020 election after seeing the widely debunked film “2000 Mules.” In a recent webinar with Mack, Songer said that the association awarding him the “Constitutional Sheriff of the Year” was an “eye-opener” regarding his duties as sheriff.

“I said, ‘You know, if I’m going to be elected sheriff, my primary job is to interpose when government is the bad guy,’” Songer said. “And here in Washington state, we’ve got some bad guys in government.”

When asked why he believes he has authority to enforce laws based on his own reading of the Constitution, Songer points to his oath of office to uphold the U.S. and state constitutions.

But while “constitutional sheriffs” often use this argument, it doesn’t hold up to scrutiny, said Bhattacharyya, who has held leadership positions with the U.S. Department of Justice and the Department of the Treasury.

For one, the word “sheriff” doesn’t appear in the U.S. Constitution. While sheriffs have discretion — they don’t go after every person for jaywalking, for example — their oath of office does not give them the authority to pass laws like legislatures or to decide their constitutionality like the courts. The oath that sheriffs take is not unique.

“It’s virtually the same as the oath that every other government officer takes,” said Bhattacharyya. “They’ve sort of cobbled together this theory based on authorities that don’t really do what they’re claiming that they do.”

Other Washington sheriffs and candidates have similar beliefs even if they aren’t members of the Constitutional Sheriffs and Peace Officers Association like Songer. Out of 39 counties in Washington, 17 current sheriffs endorsed Songer.

The “far-right” ideology promoted by Mack and Songer is expressed “by a disturbingly large number of sheriffs,” said Devin Burghart, executive director of the Institute for Research and Education on Human Rights, a Seattle-based nonprofit that’s studied the movement.

InvestigateWest reached out to each sheriff candidate in Washington hoping to clarify how they view a sheriff’s authority. Of those who responded, several expressed their belief that their power was greater than federal or state authority, even if they sometimes found Mack extreme.

Franklin County sheriff candidate Chris Turner, for example, said he believes the elected sheriff has greater authority than the federal or state government. Joe Harris, running for sheriff in Grant County, said in an interview that if there were a state or federal law that he didn’t think was constitutional, then he would not enforce it.

A campaign manager for Clark County sheriff candidate Rey Reynolds responded to InvestigateWest’s questions with a letter to the editor Reynolds wrote to a local paper in which he said, “the sheriff is the ultimate law enforcement authority in a county.” The campaign did not respond to follow-up questions aiming to clarify whether he believes sheriff’s power supersedes state and federal officials.

In Chelan County, Sheriff Brian Burnett said “it’s kind of a fine line.” Burnett, who is also the president of the Washington State Sheriff’s Association, said he’s attended speeches by Mack but that Burnett didn’t agree with the “total philosophy.” Sheriffs, Burnett conceded, don’t make laws and aren’t interpreters of the law.

On the other hand, Burnett is one of the 17 sheriffs to endorse Songer this election cycle. And the actions he took in recent years are similar to Songer’s: Burnett said he wouldn’t be investigating crimes related to Washington’s new gun laws and he announced he wouldn’t enforce COVID-19 masking rules and other mandates.

“At some point if you end up with a corrupt government, if somebody is doing something that you believe is not constitutional, that’s where the sheriff has not just the right, but a duty to intervene and uphold those laws,” Burnett said in an interview.

Other sheriffs, however, took a strong stance against the idea that sheriffs have unilateral authority when reached by InvestigateWest. Burnett’s challenger in this year’s election, Mike Morrison, said he “wouldn’t allow personal feelings to dictate how I do law enforcement.” He referred to Mack and the “constitutional sheriffs” group as “more of an extremist political group” and said he would consult with prosecutors and the county attorney if he had questions over the legality of enforcing a law.

“My No. 1 goal is to protect and serve and enforce the laws of the state,” Morrison said.

“People ask me all the time, ‘Do you believe in enforcing the Constitution?’ Yes, absolutely. That’s part of my oath,” Gese said. “I don’t think the Constitution gives sheriffs a greater degree of authority over state or federal officials.”

What Can States Do?

The power of sheriffs does not outrank the feds or the state, but in practice, there’s often little to be done about a sheriff who refuses to enforce laws.

When the group of Washington sheriffs defied the state gun laws in 2019, Gov. Jay Inslee accused them of “grandstanding.” But Inslee didn’t do anything else besides tell the Washington State Patrol to enforce the law in those counties.

Washington Attorney General Bob Ferguson, meanwhile, wrote a letter that said a county could be held liable if a sheriff, for example, failed to perform a background check for a gun that landed in the hands of a dangerous individual. The AG’s office did not return a message seeking comment for this article.

In Washington, a sheriff can be removed through a recall process just like any other elected politician, but recall efforts are typically unsuccessful. In Snohomish County, efforts to recall Sheriff Fortney over his refusal to enforce pandemic restrictions failed.

“There are not a lot of formal consequences, because they’re elected,” Bhattacharyya said.

King County recently made the sheriff an appointed position instead of an elected one. Sheriffs across the state are predictably opposed to such a move, but even those most concerned with rogue “constitutional sheriffs” don’t love that idea.

Instead, he’d rather educate the public about what he calls the “far-right agenda” and hope voters make the right decision.

Bhattacharyya, too, has mixed feelings about appointed sheriffs. Elections are the best way to hold people accountable, she said.

“I think it’s a decision that communities have to make on their own,” she said.