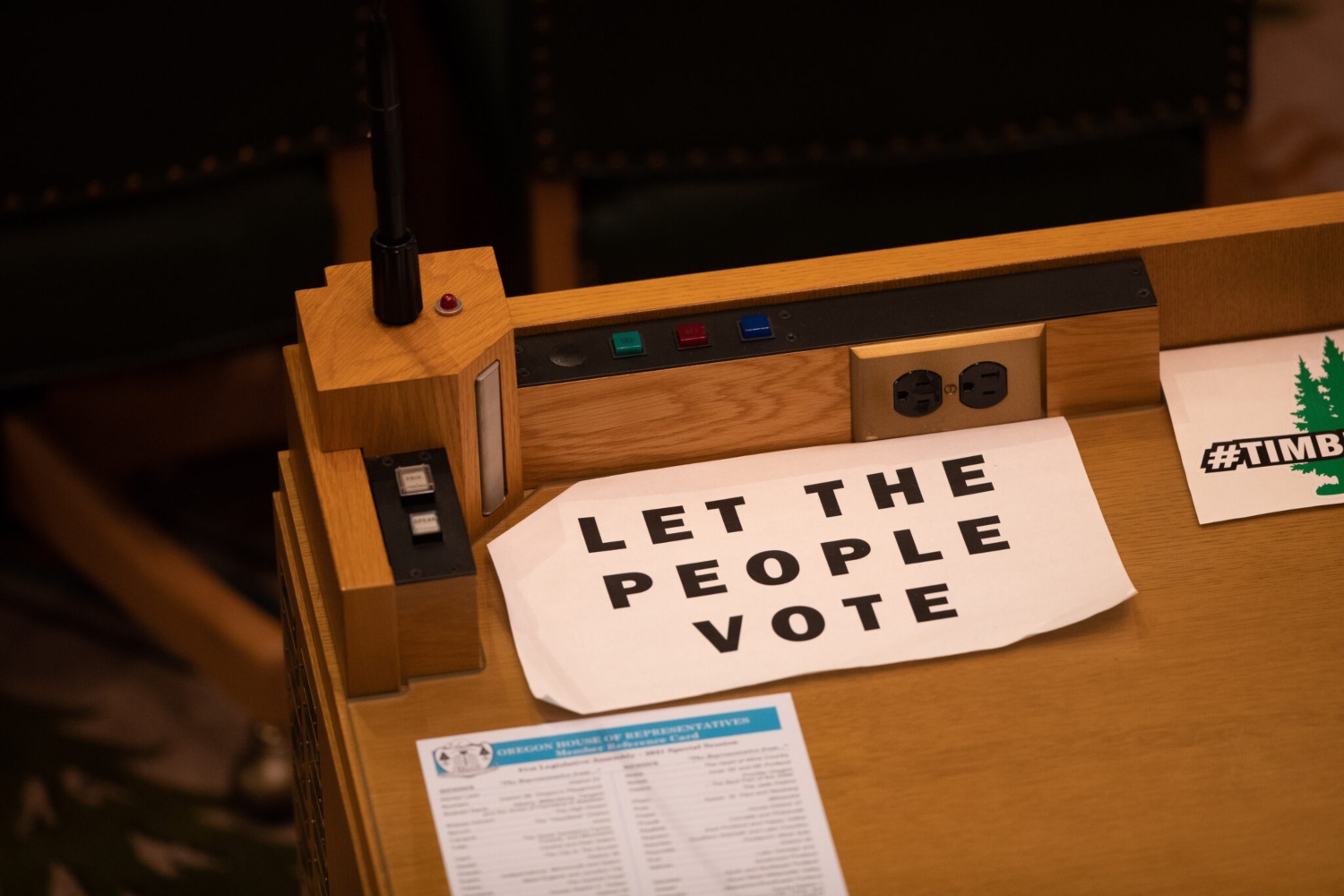 Only two candidates, including gubernatorial hopeful Betsy Johnson, will be on the November ballot

Betsy Johnson is aiming to make history this year as the first Oregon governor in decades without the backing of either major political party.

If she were to win, it would be despite an election system that makes it much more difficult for candidates who aren’t Democrats or Republicans to get elected.

Democratic and Republican candidates pay a fee ranging from $25 to $150 and fill out a two-page form, then compete in the primary. Minor party candidates are nominated separately by their parties, through conventions or party-run primaries. But non-affiliated candidates must collect petition signatures from hundreds or thousands of voters, depending on the office.

Records provided by the Oregon Secretary of State’s office indicated that more than a dozen people filed to run this election cycle for state-level offices as nonaffiliated candidates. Only three turned in signatures, and only two – Johnson and former Republican state Rep. Rich Vial – qualified for the ballot.

In Johnson’s case, collecting the nearly 24,000 required signatures involved paying almost $900,000 to a Washington-based signature gathering firm that hired circulators off Craigslist, according to state campaign finance records. Johnson also used volunteers and submitted more than twice the required number of signatures to ensure her place on the ballot.

Efforts to change Oregon’s election system are again afoot, with a coalition launching its petition drive Tuesday for a constitutional amendment to open primaries. Nearly 41% of Oregon voters are ineligible to vote in primaries because they’re nonaffiliated or registered with a minor party.

Vial, who lives in the unincorporated Washington County community of Scholls and is now running as a nonaffiliated candidate for the state Senate, was elected to the House as a Republican in 2016. He said he quickly soured on the role of partisan politics inside the Legislature, especially the expectation that he vote in lockstep with the Republican caucus.

“Almost immediately upon entering the Legislature, I realized that the caucus system really limited the ability of any legislator to truly represent their district because they were bound by the need to be loyal so they could get reelected,” he said.

Vial’s time in office was short: He survived a 2018 primary challenge and backlash from fellow Republicans over his vote for a law that prohibits people convicted of domestic violence against a girlfriend or boyfriend from owning guns, but he lost the general election to Rep. Courtney Neron, D-Wilsonville.

Vial said he generally gets a positive response from voters when he talks about why he’s running as a nonaffiliated candidate. Most agree with him that the current system doesn’t work, and that the Legislature would function better if it were more cooperative, he said.

But many voters are also skeptical of him, he said. They know what to expect if they vote for the Republican or Democratic candidate in his race – Democratic Rep. Wlnsvey Campos of Aloha and Republican political newcomer Kimberly Rice of Beaverton are also running in the 18th Senate District – but they’re less sure what Vial stands for.

“​​That’s because my answer to the abortion question is we need to both be conscious of a woman’s right to choose, and we need to be conscious of treating human life as sacred,” Vial said. “There is no middle ground for some people on that question, but I think there is a middle ground, and I don’t know what it would be if we worked at it in Oregon.”

Johnson, a former Planned Parenthood board member who has a fervently anti-abortion former Republican candidate for governor leading her outreach to Republican voters, has faced similar criticism from abortion rights supporters and opponents.

Derek Clevenger, the mayor of the small rural city of Aumsville east of Salem, learned the hard way that relying on paper signatures to get on the ballot isn’t reliable.

Clevenger said he collected about 450 signatures to run as a nonaffiliated candidate in the 17th House District, but he didn’t hand those signature sheets in to the Secretary of State’s Elections Division himself. Election officials only counted 342 signatures, and he needed 396 to qualify. Clevenger won’t appear on the ballot.

“Our system is built to exclude anyone who does not have an R or a D next to their name,” he said. “If someone is running with one of the two major parties, they don’t have to go through this step. They don’t have to collect signatures. They can just pay the fee and go straight onto the ballot.”

Nonaffiliated candidates who don’t have a long history in politics, unlike Johnson, have an even harder time breaking in, Clevenger said.

“Even when we look at the availability of having paid circulators, that’s something that’s pretty much exclusive to you know, Republican or Democratic Party,” he said. “The money doesn’t really flow into independent candidates unless your name is Betsy Johnson.”

Clevenger said he couldn’t honestly run as a member of either party because neither represents him.

His campaign website lists a hodgepodge of issues where he doesn’t neatly align with either political party. He describes the 2nd Amendment as “fundamental” and opposes attempts to ban assault weapons or large-capacity magazines, but he supports laws requiring safe storage of guns and stricter training requirements for people seeking concealed carry licenses. He supports increasing teacher salaries and benefits, putting more emphasis on vocational training and ending standardized testing, but calls for keeping total state spending on education the same.

Backers of open primaries tried and failed to put their constitutional amendment on the ballot this November, and they’re starting earlier for the 2024 election cycle.

“Political polarization is worse than ever, across the country, and I think that most people understand that we’re not going to be able to find solutions to the most pressing problems that we face unless we’re able to come together with candidates who are seeking office who want to appeal to the entire electorate,” said Michael Calcagno, an organizer of the All Oregon Votes open primary effort. “We think we’ll find success because voters are leaving the two major parties at a faster rate than we’ve ever seen before.”

The proposed amendment doesn’t detail how primaries would be run, just that candidates only could be nominated by a primary election that allows all candidates and all voters to participate.

Calcagno said supporters may try to pass a second initiative changing Oregon law or work through the Legislature on details. Alaska’s new system, in which the top four candidates advance from the primary and the winner of the general election is chosen among them through “ranked-choice voting,” is promising, he said.

Ranked-choice voting allows voters to pick their top candidates in order. The candidate who received the lowest number of top-choice votes is eliminated, and people who picked that candidate as their first choice would see their second-choice votes applied to the remaining candidates.

Calcagno, who ran for the state House as a candidate with the Independent Party of Oregon in 2016, said he saw how party affiliation affected races. He received about 19% of the vote, the incumbent Democrat received just over 50% and a Republican candidate received 31% of the vote despite not holding any campaign events, setting up a campaign website or publishing a statement in the state-issued Voters’ Pamphlet.

“So 30% of voters decided to vote for the Republican in that race, who by most judgment wasn’t truly running an actual campaign,” he said. “I think what this change will allow is for us to shed some of the party labels that are so constricting. I think we’ll see better candidates emerge when nonaffiliated candidates are on a level playing field with the major parties.”

Over the past 20 years, only three state legislators have been unaffiliated with either major political party – though all were initially elected as Democrats or Republicans.

Democratic state Sen. Avel Gordly left the party in 2006, halfway through her final term. Former state Treasurer Ben Westlund was elected to the House as a Republican in 1996, briefly ran for governor as a non-affiliated candidate in 2006 and re-registered as a Democrat later that year ahead of his 2008 campaign for treasurer.

And Sen. Brian Boquist, I-Dallas, registered with the Independent Party of Oregon in January 2021, shortly after winning re-election as a Republican.

Nationally, nearly all legislators belong to the Democratic or Republican parties, according to the National Conference of State Legislatures. As of June 1, Republicans held 3,978 of the 7,383 total state legislative positions in the U.S., Democrats held 3,266, 48 were vacant and the remaining 91 were represented by third-party or nonaffiliated candidates.

More than half of that remaining group were from Nebraska, where the 49 members of the state’s unicameral Legislature are elected on nonpartisan ballots.

Vial first learned about Nebraska’s system at a training session for new legislators after his election in 2016. He’s been interested in it ever since.

“Most of my legislative colleagues, with relatively few exceptions, were really well-meaning thoughtful people, but they could not actually discuss or vote their true conscience because of that party system,” he said. “And even though party politics still plays a role in Nebraska, my sense in studying some of their policies – particularly in the area of juvenile justice reform, which was one of my pet topics when I was in the Legislature – has really been they’ve been much more successful in finding places where the citizens in Nebraska feel united rather than divided by by the parties.”

FEATURED IMAGE:  A sign on a desk in the House Chamber at the Oregon State Capitol on Monday, Sept. 20, 2021. (Amanda Loman/Oregon Capital Chronicle)