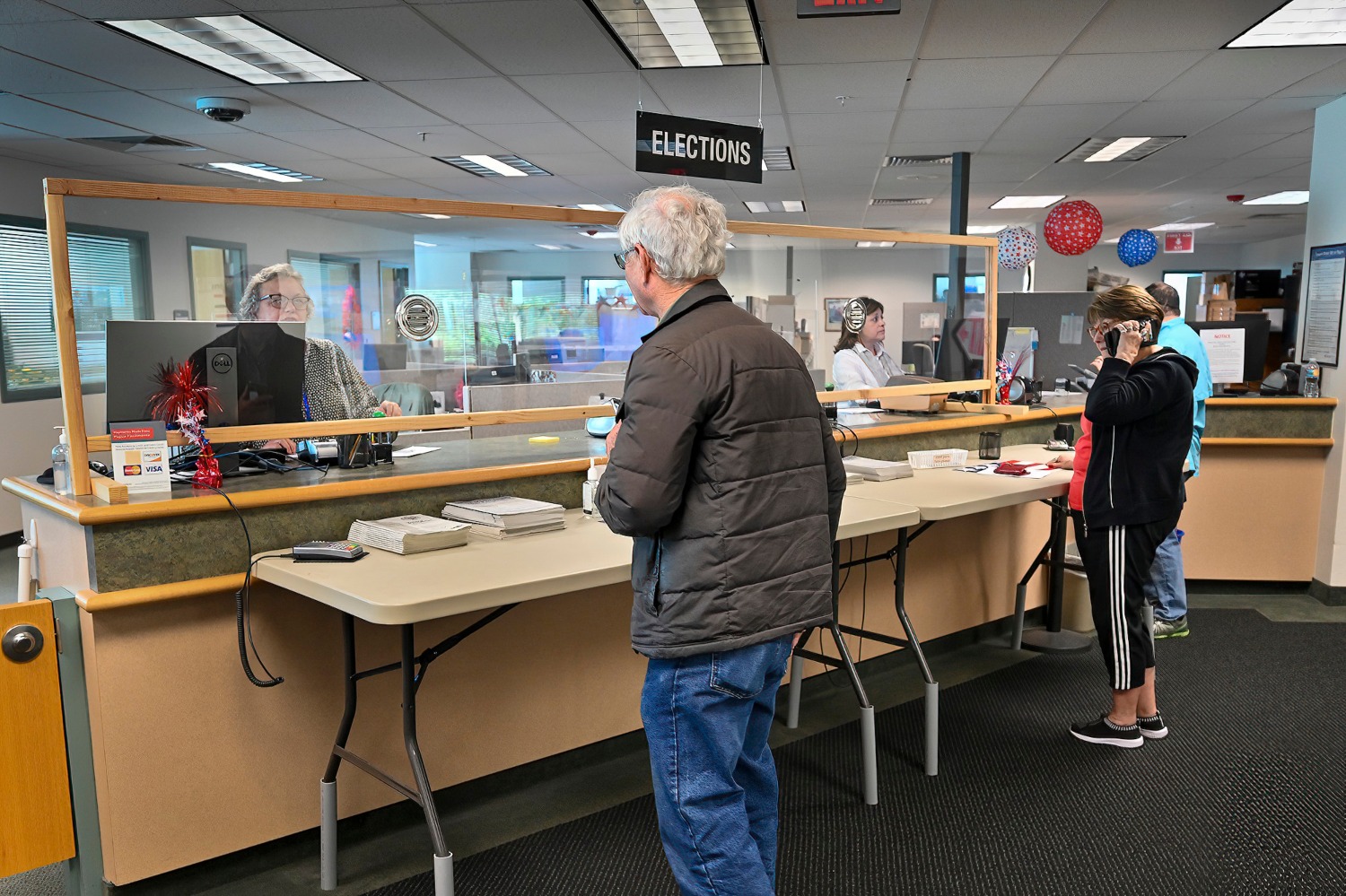 This story is part of a project called Democracy Day, in which newsrooms across the country are shining a light on threats to democracy

For the clerks who handle elections in most Oregon counties, September and October are busy months.

There are ballots to proofread, print and ship, first to overseas or military voters and then to the rest of Oregon’s nearly 3 million voters; last-minute voter registrations or address changes to process; routine testing of election equipment. And, because clerks and their staff split their time between running elections and recording documents such as deeds and mortgages, a steady flow of non-election paperwork.

This year, that pre-election rush includes something new: a stream of letters and emails demanding copies of obscure election records and ordering county clerks and other officials who don’t supervise elections to retain records from the 2020 election because they may be sued.

County officials described an uptick in correspondence tied to election conspiracy theories, which has ebbed and flowed since the 2020 election nearly two years ago. The latest batch appear to be tied to a federal lawsuit filed by an Oregon woman last month, as well as national messaging spread at a weeklong conference in Missouri hosted by election conspiracy theorist and pillow company CEO Mike Lindell earlier in August.

Jeremy Gordon, a Polk County commissioner appointed last August, said the county received more emails, letters and calls about the 2020 election than any issue other than Covid.

“(Covid-related correspondence) was more constituent-based, though,” he said. “It didn’t seem to be coordinated outside of our jurisdiction. These were folks in our county asking about Covid issues. But since then, this is by far the highest volume of communication we’ve received from the public about a single issue.”

Ben Morris, a spokesman for the Secretary of State Shemia Fagan, said the state office that oversees elections fielded 205 public records requests stemming from election conspiracy theories in July and August. In some instances, people submitting records requests even included instructions telling them to copy and paste text.

“It’s clear that it’s being driven by some of these national actors like a campaign, which is unfortunate because the public records request system is there to make government transparent,” Morris said. “When you submit 10, 20, 30 duplicate requests and we’re legally required to respond to each and every one, it bogs the system down and it gets in the way of us responding to people who are doing this in good faith.”

For the past several weeks, election officials around the country have been inundated with requests for something called the “cast vote record,” essentially a very large spreadsheet that tracks how votes were tallied.

Election officials in Colorado tied the influx to a summit Lindell hosted in Springfield, Missouri, in August, during which he told hundreds of attendees and a crowd watching online to go to their county clerk’s office and ask for the record.

In Polk County, where Clerk Val Unger oversees a staff of two, those requests meant multiple meetings with the county’s legal counsel and IT staff, trying to figure out what was being requested, whether it was legal to provide and how to make that information available. The county settled on charging $30 for a flash drive with the cast vote record, the same solution it came to when other records requesters asked for images of every ballot cast in 2020.

So far, only three people have opted to pay the $30 for ballot images from the November 2020 election, Unger said.

She was surprised that the public records requests about the 2020 election continued this year and has no idea what might happen after this November’s election.

Kulla, like county commissioners throughout Oregon, doesn’t directly oversee elections. He and two other members of the Yamhill County Board of Commissioners approve the entire county budget, including money for the independently elected clerk’s office, but that’s the extent of their involvement.

Still, he and other elected officials from around the state have received form letters ordering them to retain records relating to elections, including some requests that don’t apply to how Oregon runs elections. Oregon mails paper ballots to all voters, but the letters refer to voting machines and differences between Election Day and “absentee by mail” voting.

Election records, including ballots, are required by law to be stored for at least 22 months after each federal election.

Letters demanding they be retained are tied to a lawsuit from Jennifer Rae Gunter, a woman from The Dalles who previously filed two unsuccessful federal lawsuits against the North Wasco County School District, Gov. Kate Brown and Patrick Allen, director of the Oregon Health Authority, over mask mandates and other Covid policies.

Gunter is now suing the Secretary of State’s Office, and she filed a 35-page complaint Aug. 24 in the U.S. Court for the District of Oregon. The complaint, which Gunter submitted without an attorney, makes vague allegations of Chinese interference in the 2020 election, claims the federal government is improperly involved with state-run elections because the FBI and Department of Homeland Security help monitor threats to election security and criticizes a Fagan tweet about how county election officials have been buried in public records requests.

Gunter’s lawsuit asks that a federal judge order the state to immediately switch to only hand-counting ballots and that the federal government and state Attorney General Ellen Rosenblum investigate every allegation she made.

Gunter and other plaintiffs did not respond to emails sent to the addresses they provided with their letters to county election officials.

Lawsuits like Gunter’s, the related records requests and a “misguided and misinformed” push to hand-count every ballot are part of a coordinated nationwide effort, said Paul Gronke, a Reed College political science professor and director of the college’s Elections & Voting Information Center.

“The move appears to be inspired by ongoing efforts to sow distrust in our election system, and with false claims that hand counts are somehow more accurate,” Gronke said.

Counties, especially large ones like Multnomah County, have hundreds of different ballot styles. Every voter will see statewide races, such as governor, labor commissioner and four statewide initiatives, on their ballots, but down-ballot races are based on geography.

Machines can quickly read a barcode, recognize a ballot style and tabulate the votes correctly. People are much slower and more prone to errors.

Instead, Oregon’s county election offices test machines and ballot styles before each election, and the public is welcome to observe in-person or through video. After each election, they hand-count a random sample of ballots and compare to results from the tabulation machines as part of their standard post-election audit.

“This is Statistics 101: you don’t need to test all of your blood to see if you have a disease — you take a sample,” Gronke said. “It’s the same thing with elections. You don’t need to count every ballot in a race that, for example, was decided 60-40 or 70-30.”

Morris, with the Secretary of State’s Office, said Oregon’s system of public post-election audits and voting by mail should make voters feel more confident in their elections.

“Our system is really built in a way that makes us positive that the results are accurate, because paper is paper, and you can actually physically look at the ballots that were cast and compare them to the results of the tally machines,” he said. “That’s something that doesn’t exist everywhere, but it’s a feature of vote by mail that really adds to its security.”

Voters with questions or concerns about elections can visit oregonvotes.gov or their county election official’s websites, look for news from trusted local news outlets or even go into their clerk’s offices and watch as machines are tested and ballots are counted, he said. Local clerks will soon share information about the machine testing, which is a scheduled event open to the public, and many elections offices offer tours.

“It’s not the most exciting thing in the world to go down to a county elections office, but anyone who does it and talks to the clerk walks away feeling really, really good about Oregon’s vote by mail system because once someone explains to you how this goes, it really demystifies it and clears up a lot of the myths that are floating around out there,” he said.