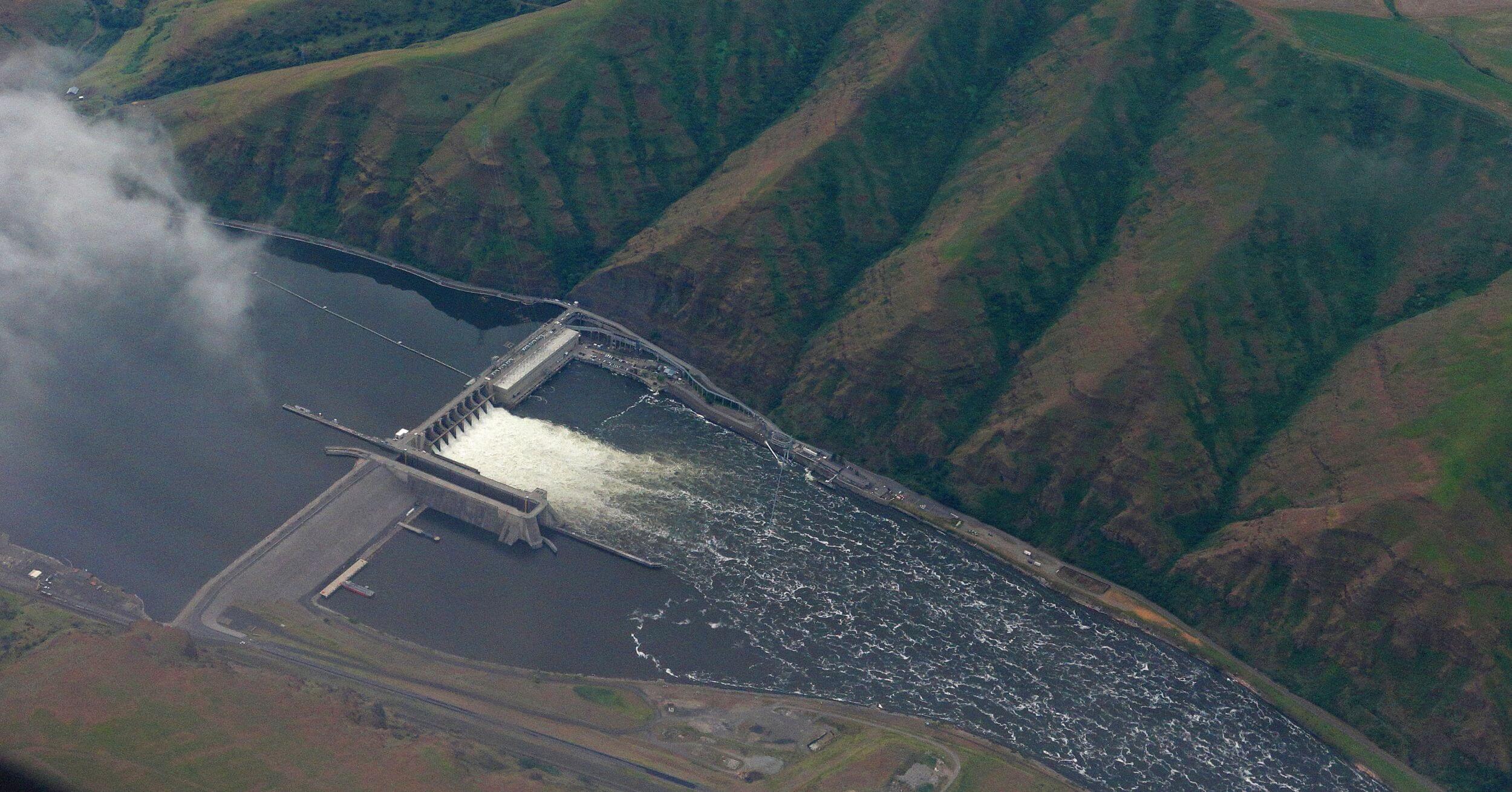 By Orion Donovan-SmithAugust 26, 2022No Comments

By Orion Donovan-Smith / The Spokesman-Review

WASHINGTON – Gov. Jay Inslee and Sen. Patty Murray have concluded that the Lower Snake River dams should not be breached before the financial and environmental benefits they provide are replaced, work that would cost an estimated $10 billion to $31 billion, according to a report commissioned by the two Washington Democrats.

The joint statement coincided with the release Thursday of a final version of the report, which weighed the costs and benefits of removing the earthen portions of the four dams between the Tri-Cities and Lewiston in an effort to restore declining salmon runs, for which the federal government has guaranteed fishing rights to Northwest tribes.

Calling the possibility of salmon extinction unacceptable, Murray and Inslee pledged to continue fish recovery efforts while calling for the “enormous” investment in energy and transportation that could make breaching feasible in the future.

In a separate statement, Murray said she and Inslee looked carefully at research “on all sides of this issue,” consulted with tribes, farmers, environmentalists and other stakeholders, and considered every option to restore dwindling populations of salmon, steelhead and other anadromous fish that migrate upstream from the ocean to spawn.

“However, it’s clear that breach is not an option right now,” she said, because “while many mitigation measures exist, many require further analysis or are not possible to implement in the near-term.”

Murray emphasized that breaching the dams would require bipartisan support in Congress, where there is staunch opposition to such a move from Northwest Republicans. After a draft of the report was released for public comment in June, GOP Reps. Dan Newhouse of Sunnyside and Cathy McMorris Rodgers of Spokane introduced a bill that would prevent the dams from being breached.

In a statement Thursday, Newhouse criticized Murray and Inslee for the “duplicative, unnecessary” report.

“This report outlines what central Washington has known all along: there is no reasonable replacement for the Lower Snake River Dams,” the statement reads. “The fact of the matter is, even if they were able to replace the 66% of the state’s energy which is currently provided by the clean, renewable, and affordable hydroelectric dams, the loss of the dams would still devastate our communities: prices would rise, crops would perish, jobs would be eliminated, and the environment would be threatened.”

McMorris Rodgers, meanwhile, said the Democrats’ conclusion was “a welcome step back towards reality,” but also slammed the process that got them there.

“For months, they led a sham process paid for by Washington taxpayers and pandered to radical environmental groups who ignored the facts in pursuit of what is still their end goal – breaching the Lower Snake River dams,” she said in the statement.

Advocates of dam breaching expressed measured optimism in response to Murray and Inslee’s recommendations. Samuel Penney, chairman of the Nez Perce Tribe, called the Democrats’ proposal “the next step in the right direction to save these sacred species.”

“The Nez Perce Tribe appreciates Senator Murray and Governor Inslee’s courage and leadership at this moment of crisis for Columbia Basin salmon,” Penney said in a statement. “We appreciate Senator Murray and Governor Inslee’s recognition that salmon extinction is unacceptable, and that restoring the lower Snake River can be done in a way that not only addresses affected sectors but also ensures a better future for the Northwest.”

“This report is a call to our entire region to roll up our sleeves, have the tough conversations, and get to work on specific solutions with a timetable that works for everyone,” Smith said in a statement. “Communities are hurting and we need answers and action now.”

Inslee and Murray waded into the region’s intensely controversial salmon-anddams debate in May 2021 when they spurned a proposal by Rep. Mike Simpson, an Idaho Republican, to spend $33 billion to replace the benefits the dams provide – including irrigation, barge transportation between Lewiston and the Tri-Cities, and enough energy production to power a city the size of Seattle.

Simpson shook up the long-running debate when he released his proposal in February 2021, drawing praise from tribal leaders and environmentalists, and scorn from his fellow Republicans in Congress. The region’s Democratic leaders largely kept quiet – reflecting the difficult balance they have tried to strike between Indigenous people’s rights and the low-carbon energy the dams provide – until Murray and Inslee announced in October 2021 they would conduct their own process to consider dam breaching.

In his own statement, Inslee said breaching the dams would give salmon the best chance to return to abundance in the Snake and the lower Columbia River into which it flows, but he added that doing so before replacing the benefits of the dams “would be disastrous.”

“The question of whether to breach the Lower Snake River Dams is deeply personal to the many communities and Tribes engaged in this debate,” the governor said. “The stakes are high, and the debate often devolves into a binary choice to breach now to save the salmon or not breach and maintain the status quo. Neither of those options are responsible or feasible.”

Advocates of dam breaching were encouraged in July when the Biden administration weighed in with a pair of reports that supported taking sweeping actions to restore salmon runs, including potentially breaching the dams.

When Murray got involved in the dam-breaching debate in May 2021, she signaled Congress could use the Water Resources Development Act – a bill lawmakers pass every two years to authorize federal water projects – as a vehicle toward eventually breaching the dams. But when the Senate passed the bill in a near-unanimous vote July 28, after the House passed its own version in a similarly bipartisan vote in June, it didn’t include provisions related to the dams, hinting that Congress was not about to take action on the issue.

The report, prepared by a consulting team composed of Seattle-based firm Ross Strategic and D.C.-based Kramer Consulting, assesses the potential costs and benefits of dam breaching but doesn’t make recommendations.

“With the damming of the Snake River, the wealth of the Snake River has been transferred through energy production, transportation, and irrigation to the detriment of salmon and the communities that rely on salmon,” the report concludes.

Maintaining the dams costs an estimated $150 million to $278 million per year, the report finds, but breaching them and replacing the benefits they provide would cost between $10.3 billion and $31.3 billion, in addition to other unforeseen costs.

During a public comment period from June 9 to July 11, the consultants wrote, they received “approximately 1,769 online form submissions, 22 comments via paper mail, and approximately 65,000 emails and attachments.”

Murray and Inslee note in their recommendations that, if the dams were breached, “some communities on the lower Snake River would experience fundamental changes, and that some industries relying on the Dams would no longer be viable.”

“We take these impacts extremely seriously,” they continue, “and any approach involving breaching of the Lower Snake River Dams must provide opportunity for all the communities that would bear these impacts.”

While acknowledging the intense disagreement in the debate over the dams that has raged for decades in the Northwest, Murray and Inslee urged the stakeholders to work toward a solution based on a shared desire to see salmon and low-carbon energy production coexist.

“While we have heard disagreement and intensity of feeling, we have also seen clear areas of common agreement,” they said. “The present moment affords us a vital opportunity to build on these areas of agreement, and we firmly believe that the region cannot afford another fifty years of confrontation, litigation, and acrimony over the Lower Snake River Dams.”

FEATURED IMAGE: In this May 15, 2019 photo, the Lower Granite Dam on the Snake River is seen from the air near Colfax, Washington. (Ted S. Warren/AP)

Orion Donovan-Smith’s reporting for The Spokesman-Review is funded in part by Report for America and by members of the Spokane community. This story can be republished by other organizations for free under a Creative Commons license.