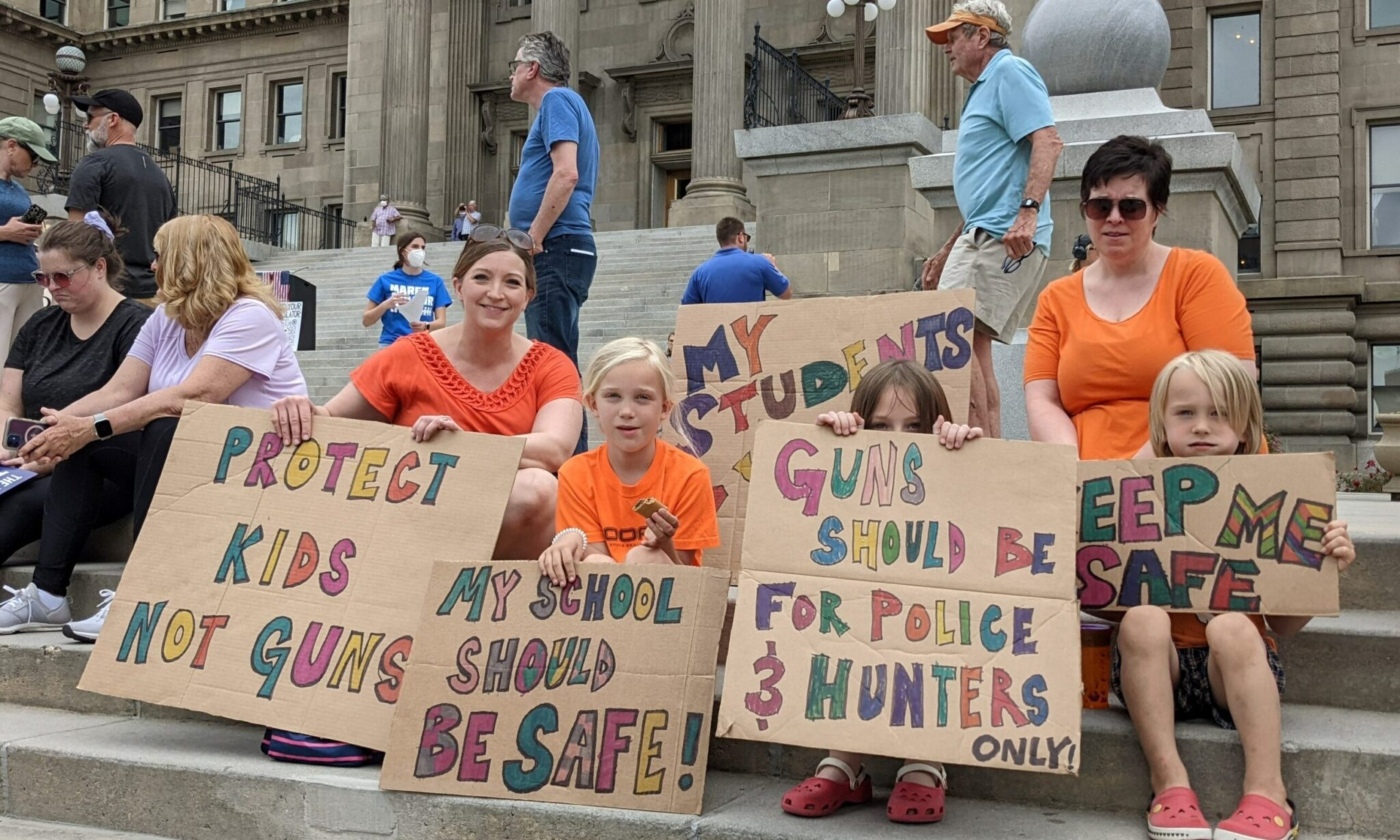 By Audrey DuttonJune 15, 2022No Comments

Idaho’s congressional delegation has received hundreds of thousands of dollars of support from gun rights organizations — and has stayed mostly quiet on the topic of new gun safety and gun control proposals now making their way through the U.S. Congress.

The four men who represent Idahoans in the U.S. House and Senate have yet to comment on new firearms policies in the wake of an elementary school shooting in Uvalde, Texas. They  have received more than $609,000 in financial support from gun rights groups, according to campaign finance data compiled by the nonprofit Open Secrets. Most of that is from the National Rifle Association, or NRA.

The shooter in Uvalde — an 18-year-old who legally purchased semi-automatic rifles days before entering the school — killed 19 children, ages 9 to 11, and two teachers and wounded others, including his grandmother. The husband of slain teacher Irma Garcia also died two days later of a heart attack his family attributed to grief, and an 11-year-old survivor was hospitalized with heart problems her mother attributed to trauma.

There have been no fatal school shootings in Idaho to date. However, a 12-year-old student at Rigby Middle School fired a semi-automatic pistol and injured students and a janitor in May 2021, before a teacher persuaded the student to hand over the gun and accept a hug, according to reports.

But hundreds of Idahoans die each year from gunshot wounds. In October, a 27-year-old man killed two people and injured four at the Boise Towne Square mall. The Idaho Statesman reported that police had flagged the shooter months earlier, after an encounter at the Idaho Capitol building.

The Gem State currently ranks 16th in the U.S. for firearms deaths per capita.

There were 1,854 firearm deaths in Idaho between the years 2014 and 2020, according to the Idaho Violent Death Reporting System. That included 190 children.

The overwhelming majority of firearm deaths in Idaho are suicides, but guns are used in homicides as well. The reporting system shows 35 children killed in firearm homicides between 2014 and 2020.

Guns are big business in Idaho, and big money in politics

The firearms and ammunition industries are strong in Idaho.

Manufacturing and exporting data from the federal Bureau of Alcohol, Tobacco, Firearms and Explosives shows that Idaho’s gun industry created more than 36,000 firearms in 2020.

There were 1,298 dealer and manufacturer licenses active as of last month, according to ATF records. That was a 13% increase in the past five years.

Rep. Mike Simpson, a longtime Republican member of the U.S. House, represents eastern and south-central Idaho and roughly half of the Treasure Valley. The NRA has provided Simpson at least $389,209 of direct and indirect support since his first race in 1998, according to the data. He ranks 24th among all 535 members of Congress, the data show.

As a whole, Simpson has received a total of $84,583 in campaign contributions and $343,226 of independent spending support from gun rights groups, according to another set of data compiled by Open Secrets. Gun control groups have spent $861 in opposition to him, the data show.

Simpson released a statement about the Uvalde shooting in a tweet on May 26.

“This is not an acceptable status quo and we must do better for our children. Kathy and I are praying for our country and especially for the families who are living the unimaginable,” it said. “Hate and division are too present in our country, and elected leaders must set an example by coming together to find meaningful solutions that (address) the clear mental health crisis in this country.”

Simpson’s press secretary did not respond to four emails and a voicemail requesting comment from the congressman about the NRA support and his positions on specific gun-control proposals.

Sen. Mike Crapo, a Republican who has spent nearly three decades in Congress, received at least $57,539 in direct and indirect support from the NRA since his first race in 1992, the Open Secrets data show. He ranks 61st among all members of the House and Senate, according to the data.

As a whole, Crapo has received a total of $92,665 in campaign contributions and $6,389 of independent spending support from gun rights groups, according to data compiled by Open Secrets. Gun control groups have spent $861 in opposition to him, the data show.

Crapo’s press secretary did not respond to two emails from the Sun.

Sen. Jim Risch, a Republican who previously served as Idaho’s lieutenant governor and governor, has received $24,338 in direct and indirect support from the NRA since his first campaign for Congress in 2008.

As a whole, Risch has received a total of $70,160 in campaign contributions and $2,494 of independent spending support from gun rights groups, according to data compiled by Open Secrets. Gun control groups have spent $861 to oppose him, the data show.

Risch’s deputy press secretary responded immediately to an email from the Sun, but wrote, “I don’t have a statement to share at the moment and we likely won’t be (able) to put an interview on the Senator’s calendar.”

Rep. Russ Fulcher, a Republican who represents the northern and north-central regions of Idaho and roughly half of the Treasure Valley, has received at least $2,000 in direct support from the NRA since his first race in 2018, the Open Secrets data show.

Most of Fulcher’s contributions come from gun rights groups besides the NRA. He has received a total of $9,500 in direct contributions from all gun rights supporters, the Open Secrets data show.

The amounts are career totals for current officeholders.

What do Idaho’s federal lawmakers believe about gun control?

The U.S. Senate is expected soon to take up gun safety legislation. National media reported in the past week that a bipartisan group of 20 senators reached a deal on the package, which would include:

The group of senators who reached the deal, as reported by Politico and CNN, did not include Crapo or Risch.

Fulcher is the only member of Idaho’s delegation so far to speak at length about the issue of gun violence following the Uvalde massacre.

The most junior member of Idaho’s delegation, and with the least amount of career-total NRA support, Fulcher said on KBOI talk radio that he has “the same frustration that everyone else does” about repeated mass shootings. But restricting gun ownership is “entirely missing the mark,” he said, suggesting that strengthening families and “moral teaching” are solutions, as Boise State Public Radio reported.

Signs and speeches at the Capitol; long guns across the street

A crowd gathered Saturday at the Idaho Capitol for a March For Our Lives rally, demanding stricter gun control measures to prevent mass shootings.

Alison Henken, who works in education and has two children in the Boise school system, said that every time a mass shooting happens, “I just keep saying, ‘I don’t want to take everyone’s guns away, but we have to do something different.’ It can’t be OK for a person to go and get a gun that they can (use to) shoot 300 people within minutes, and take that to a school.”

Her 7-year-old daughter, Elianne, said she doesn’t want to have an active-shooter lockdown at her school. So far, she said, “we’ve only had practices” at her school, and “to some kids, it feels real.”

Heather Etcheverry, from Kimberly, said she drove to Boise for the demonstration because she teaches kindergarten, and her daughter just finished second grade.

“I don’t understand why we’re still circling this, over and over again,” she said. “I believe in a person’s right to bear arms, but I also believe that our Founding Fathers had no idea what it was going to look like in the year 2022, and things have just gotten to the point where it’s easier to buy a gun than it is to buy medication, and I’m not OK with that.”

Across the street, in a grassy area overlooked by a statue of assassinated former Gov. Frank Steunenberg, gun rights activists formed a smaller crowd. Several of the counter-protesters held firearms and wore tactical gear.

Alex Shelton, a 21-year-old Meridian resident, said he came to the Capitol to exercise his right to carry firearms.

“I used to be on one side,” Shelton said. “It took a while for me to finally go in and educate myself, and truly understand what this country was founded on.”

Shelton said that, in addition to supporting firearms as a tool to defend “against an evil,” he points to the Second Amendment as a reason to oppose gun licenses, waiting periods and other restrictions on firearms ownership. Shelton said he believes such limitations would be a step backward for constitutional rights.

“I believe no one should have to have a license,” he said. “Here in this state, I can carry wherever, whenever, however I want, you know, and I think that’s a fair right to give — the right to carry.”

Asked if he wears tactical gear or guns to work, Shelton said he does: He works in a gun store.

FEATURED IMAGE:  Alison Henken (left) of Boise and Heather Etcheverry of Kimberly brought their children to the Capitol on June 11, 2022, to show support for gun control measures. They were joined by their children, Elianne Henken, 7, Natalie Etcheverry, 8, and Anderson Henken, 4. (Audrey Dutton/Idaho Capital Sun)