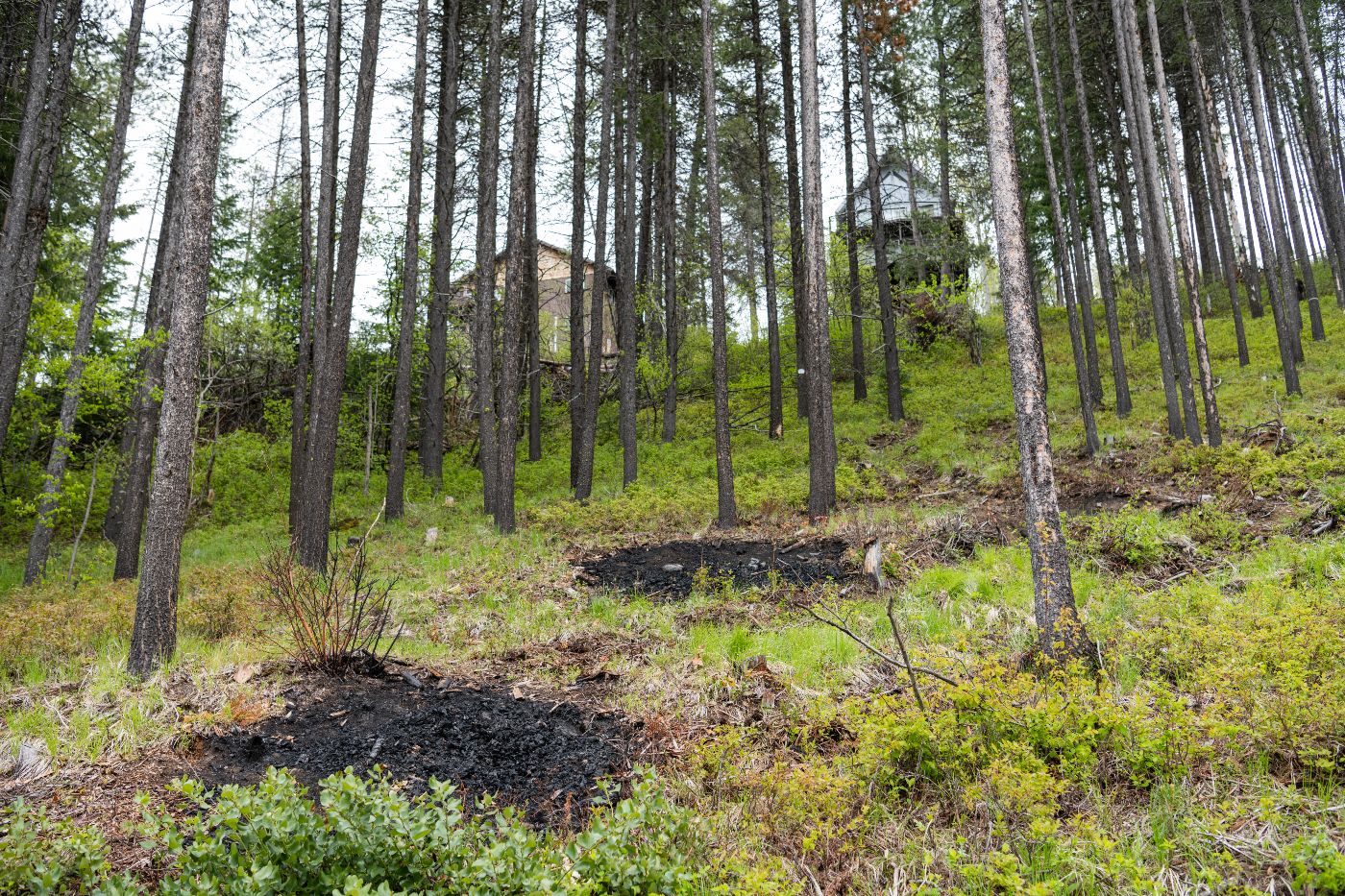 At 9 on a Saturday morning, Dan Holman, a 74-year-old retired oncologist, picks up a chainsaw and heads into the forest.

The forest in question is on the slopes of a hill outside of Chewelah in northeast Washington — and just a stone’s throw away from Holman’s home in the woods.

Armed with the chainsaw and years of experience, Holman spends the next four hours working with more than 50 of his neighbors to make their community safer from wildfires. The smell of freshly cut lodgepole pine and fir soon mixes with smoke from small fires used to clear weeds and brush.

Holman is one of the 2.5 million Washingtonians estimated to live in the wildland-urban interface, or WUI, regions where burnable forests or vegetation meet urban development.

According to a 2018 study published in the Proceedings of the National Academy of Sciences, the wildland-urban interface is the fastest growing land use type in Washington and in the country at large. It also poses a big risk to its inhabitants with the growing threat of wildfire.

“The main issue right now with the WUI is wildland fires — the lack of fire protection, the lack of fuel mitigation to protect the homes,” says Holman.

In Flowery Trail, a 47-home subdivision about 60 miles north of Spokane, Holman organizes “volunteer Saturdays” where members of the local homeowners association work together to reduce the threat from wildfire.

Meanwhile, city planners and state lawmakers are trying to reduce sprawl in the wildland areas through new legislation, but the number of houses built on the wildland interface increased by 41% between 1990 and 2010, and continues to grow.

Owing to climate change, the Pacific Northwest has already seen an increase in wildfires — and that danger is only going to get worse with new developments spreading to the wildlands. And while state officials sometimes step in to remove fire-prone vegetation like trees and brush, it is often up to the people who live there to keep everyone on the same page, and put in the work toward fireproofing their homes.

In 2021, the state Department of Natural Resources developed a map of regions that are considered interface areas to gain a better understanding of where new properties are being developed.

“Folks need to be aware of where the WUI is occurring and how that changes what can actually be built in that environment,” Cooper said.

Also in 2021, the Washington State Building Code Council, an advisory state agency, began considering proposals for a WUI Code, which it hopes to implement next year. According to Cooper, the map she helped develop will define which areas are affected by the new regulations.

Current proposals being considered aim to enforce defensible-space requirements around houses where no burnable vegetation can grow, or adding construction requirements like noncombustible materials for the exteriors of homes.

When Holman tried to get Flowery Trail added to a Stevens County fire district, he said the fire department’s representatives were reluctant. Back then, the neighborhood’s forests were thick and the community had too many fire risks, like fallen trees.

After five years of fuel-reduction programs and significant help from the Department of Natural Resources, Holman says Flowery Trail finally joined Stevens County fire district four around 2014. The coverage they received is conditional and renews yearly.

“The contract states that we must maintain ‘home hardiness’ — which is clearing all the burnables away from your home or your cabin,” Holman said.

Meanwhile, in the state House of Representatives, House Bill 1099 seeks to add a climate aspect to the state’s Growth Management Act. It would recommend reducing new growth in the wildland-urban interface area while developing buffer zones and wildfire preparation measures to protect existing residential areas in those regions.

“The point of the bill is that we need to be smart about how we develop and where we develop,” Duerr said.

The bill failed to pass the past two legislative sessions. She said she plans to reintroduce it next session and is hopeful for its outcome.

According to Duerr, the bill’s most vocal supporters were firefighters, who are frequently called to areas farther away from their departments to fight fires. For Duerr, mitigating sprawl with HB 1099 means reducing pressures to expand and maintain infrastructure like roads and fire services.

But for people already living in these communities, access to those services is already in high demand.

Patty O’Hearn, like Holman, is a retiree. She owns about 40 acres of forested property in Kittitas County, on the eastern slope of the Cascades, and she says she surveys her property nearly every day in search of trees that need to be thinned or brush that needs removal.

Over the years, O’Hearn has acquired a chipper, some chainsaws, even a brush mower — but she knows that not everyone can afford to do that.

“Some of my neighbors don’t have the funds or the equipment, or their property is such that they need people who know what they’re doing to come in and do handwork,” O’Hearn said.

Mitigating wildfires gets even more complicated when renters come into the picture. Katie Fields, community program manager for the Washington Environmental Council, a policy advocacy group, says farmworkers and other people who rent generally have fewer resources and more limitations on what they can do.

Closer than you think

O’Hearn and Holman both live in “typical” wildland-urban areas. They are surrounded by forests and far from urban centers. In the interactive map made by the Department of Natural Resources, these areas would be considered “intermix” because they are surrounded on two or more sides by burnable cover.

But many people live in the wildland-urban interface without even realizing it — though this knowledge can be crucial to helping reduce the presence of “fuel” on private properties.

Interface regions on the state’s map border wildlands on just one side, which means some urban spaces are at risk of wildfire.

Guy Gifford, an assistant division manager at the Department of Natural Resources, says that fires aren’t just caused by homes being in close contact with burning trees. Instead, more than 50% of home loss and damage to property during wildfires is caused by embers — not the direct flame.

“When a tree burns, they release little embers — like matches — that can go up in the air, travel over a mile, and drop around your home a mile away from the actual fire,” Gifford said.

The embers can catch on to small things, like a pile of left leaves unattended in a yard, or paper waste from an open recycling bin. Gifford says that reducing these flammable materials is one of the most important and easiest steps that homeowners and renters can take to mitigate fire risk.

As a result, O’Hearn says that communities like South Cle Elum Ridge, where she lives, rely on the cooperation of neighbors creating defensible spaces around their homes.

“It’s very fortunate for myself and all of us that my neighbors understand and are on the same page and have been doing work,” O’Hearn said.

Holman, who lived in Spokane at the time of the 1991 Spokane Valley wildfire, says he’s been “scarred for life” when it comes to fire safety, and hopes his neighbors will continue to do their part.

Clearing out trees and keeping burnable cover away from homes requires persistent, yearlong efforts, according to Holman. But for Flowery Trail, the results of these efforts are starting to show.

In 2019, Firewise, a national program that recognizes resident efforts to fireproof communities, selected Flowery Trail as a site of excellence.

FEATURED IMAGE: A view from the lower, undeveloped part of the Flowery Trail neighborhood where slash piles have been burned, outside Chewelah, Washington. (Erick Doxey/InvestigateWest)