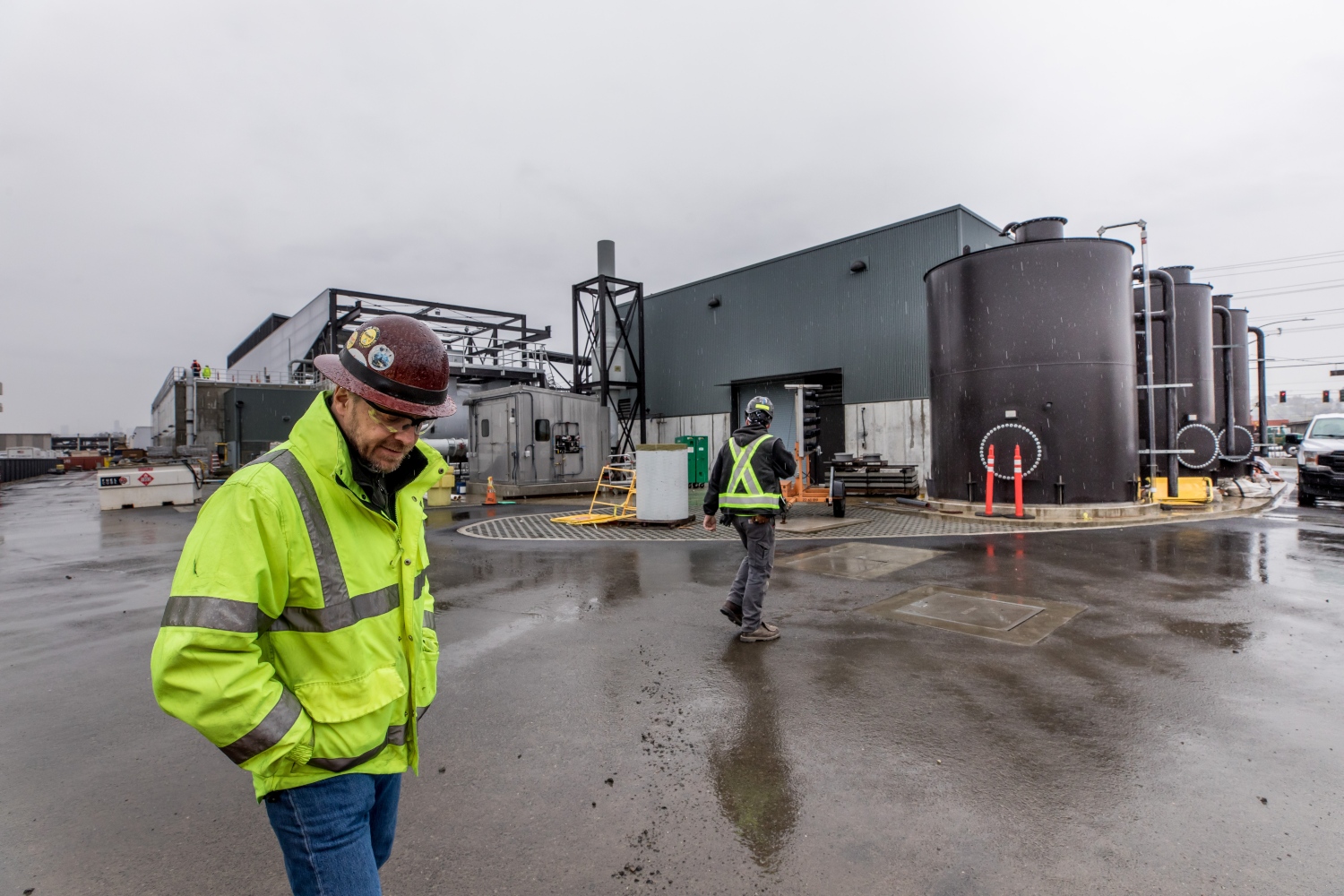 It was dark and stormy — in other words, an April morning in Seattle — and a mixture of untreated stormwater and raw sewage was threatening to flow directly into Salmon Bay, which links Lake Washington and the Puget Sound.

Over the next 48 hours, rain would overwhelm a network of tunnels under the city designed to treat the wastewater, sending an unsanitary soup of stormwater, chemicals and sewage spewing from an underwater pipe.

The spill would light up King County’s sewer map, an online tool that tracks sewage overflows across the county, effectively marking areas where swimming, fishing and boating should be avoided.

Last year alone, the Puget Sound recorded 220 such spills. On average, these spills collectively dump about 93 million gallons of chemical discharge a year — straight into Puget Sound and its surrounding water bodies.

“Combined sewage outflow is never a willful violation,” Fiore said. “The system just gets overwhelmed because it wasn’t built for this weather. It was designed 50 to 60 years ago.”

According to a 2017 study by Seattle Public Utilities, what used to be once-in-a-century storms are now expected to happen every 25 years. Sewer infrastructure is expanding to keep up.

Construction has already begun on the Ship Canal Water Quality Project, a $570 million wastewater management collaboration between the Seattle and King County governments.

Project Executive Keith Ward said the project targets six problematic outfall pipes along the Ship Canal and expects to reduce the number of toxic spills from those pipes to just six per year.

“The water bodies we care about — our Lake Union, the Ship Canal and Salmon Bay – those are what we’re really protecting,” Ward said.

Failure to protect those water bodies can be costly — especially when you’re working on a deadline.

After a number of violations of the Clean Water Act in the mid-2000s, the Environmental Protection Agency and the Department of Justice sought settlements from the county and Seattle. In 2013, the city and the county entered into separate consent decrees with the state Ecology Department and the EPA, agreeing to reduce such spills to one overflow per outfall pipe per year by 2030.

As a part of the agreement, King County has paid $310,500 in fines since 2013 for wastewater discharge that exceeded the pollution limits outlined in its permits.

Now, Seattle and King County officials are under mounting pressure to clean up their act with projects like Ship Canal — but these projects have had to get bigger to withstand their toughest challenge yet: climate change.

Near Discovery Park, Seattle’s largest public park, there’s a facility by the water called the West Point Treatment Plant. Both the city’s and county’s networks of pipes pump sewage and stormwater there for purification.

But when rain overwhelms the capacity of the plant, untreated wastewater spills from sewage outfalls across Seattle, including the one in Salmon Bay.

When complete, the Ship Canal Tunnel will hold up to 30 million gallons of water during excessive rainfall, and pump it to the nearby West Point facility after the storm has passed. The tunnel — 18 feet, 10 inches wide and 2.7 miles long — would be about the size of a Sound Transit light-rail tunnel, Ward said.

“When rain events happen, we’ll divert water into these drop shafts into the storage tunnel,” Ward said. “It’ll be held there until the rest of the system is ready for it.”

At its current size, the tunnel is expected to prevent about 75 million gallons of wastewater from entering the sound annually — but that wasn’t always going to be the case.

According to city officials, the Ship Canal project had to be modified during design to keep pace with climate change.

The tunnel was made almost 5 feet wider, increasing the storage volume by 15 million gallons from the original design. The change resulted in a cost increase of about $29 million.

Sabrina Register, a spokesperson for the city of Seattle, said in an email that the modifications were made based on changes in historical rainfall and estimates for future climate impacts.

“By the end of 2015, Seattle had experienced the most intense 20-year period in its rainfall history,” Register said. “Current climate science predicts that future rainfall will be even more intense.”

For Shawn McKone, a water quality specialist at the Department of Ecology, the fact that city planners don’t know what rainfall might look like in the future is what makes improving combined sewer systems such a daunting task. The amount of sewage expected to be kept out of the sound by the Ship Canal project, for example, is based on rainfall data from 2018.

“The biggest issue with climate change is just not knowing what the future is going to look like,” McKone said.

King County officials know that a single storm can make a huge difference.

During the dry season, roughly from May to October, the West Point Treatment Plant needs to treat 90 million gallons of water on a daily average, said Fiore, with King County’s Wastewater Treatment Division. During the wet season, that number more than quadruples to 440 million gallons per day.

This year, King County is expected to finish construction on a treatment center designed to bridge that difference.

Once operational, the plant will treat up to 70 million gallons of wastewater per day on stormy days, supplementing the West Point facility by diverting water that would have otherwise overwhelmed it.

According to Chris Mack, the project’s construction manager, the plant is expected to run about 20 times a year, based on current predictions for the frequency of rain events.

“Of course, for climate change resilience, the plant can be used more frequently to deal with more wet weather,” Mack said.

As the storms on the horizon get bigger, King County officials are looking for more time to prepare. In 2019, the county entered into negotiations with Ecology and the EPA to revise the consent decree.

Negotiations are ongoing, but meanwhile time may be running out for one crucial Puget Sound inhabitant.

Every October, a group of volunteers travels to Longfellow Creek, a West Seattle stream that connects Elliott Bay to the rest of Puget Sound.

The volunteers are surveying the health of coho salmon — and are finding, on average, that three in five are fatally sick.

Puget Soundkeeper, a nonprofit organization that monitors the health of waterways in the region, has been organizing these volunteers since 2015. It has been tracking “Urban Runoff Mortality Syndrome,” a deadly disease seen in salmon and caused by stormwater.

Sean Dixon, executive director of Puget Soundkeeper, said the chemical responsible is an antioxidant used in rubber tires. When it rains in urban areas, the stormwater picks up the chemical — known as 6PPD-Quinone — before entering the sewage system.

After large storms, untreated stormwater mixtures that contain 6PPD-Q flow through outfall pipes and into nearby streams.

“When coho salmon swim through creeks or streams or rivers where 6PPD-Q is present,” Dixon said, “the vast majority will die before they can reach the point in the stream where they’re going to start their spawning.”

In previous years, surveyors have discovered pre-spawn mortality rates of up to 90% among female salmon, which the Soundkeeper describes as “an alarmingly high statistic.”

For Dixon, the solution is prevention. He advocates for more “green stormwater infrastructure” — a mix of plants, trees and soil that mimic nature and soak up rain before it can reach the sewer system.

Ideally, this green infrastructure complements traditional “gray” infrastructure, like detention tanks and storage tunnels, and would support projects like the Georgetown facility and the Ship Canal tunnel.

Per a 2021 report, Seattle has added green stormwater infrastructure in 8,000 locations across the city, and has incorporated it alongside regular sewage projects into its plan to meet the consent decree targets.

“If we reduce the amount of water that goes into the sewers in the first place,” Dixon said, “We solve the problem.”