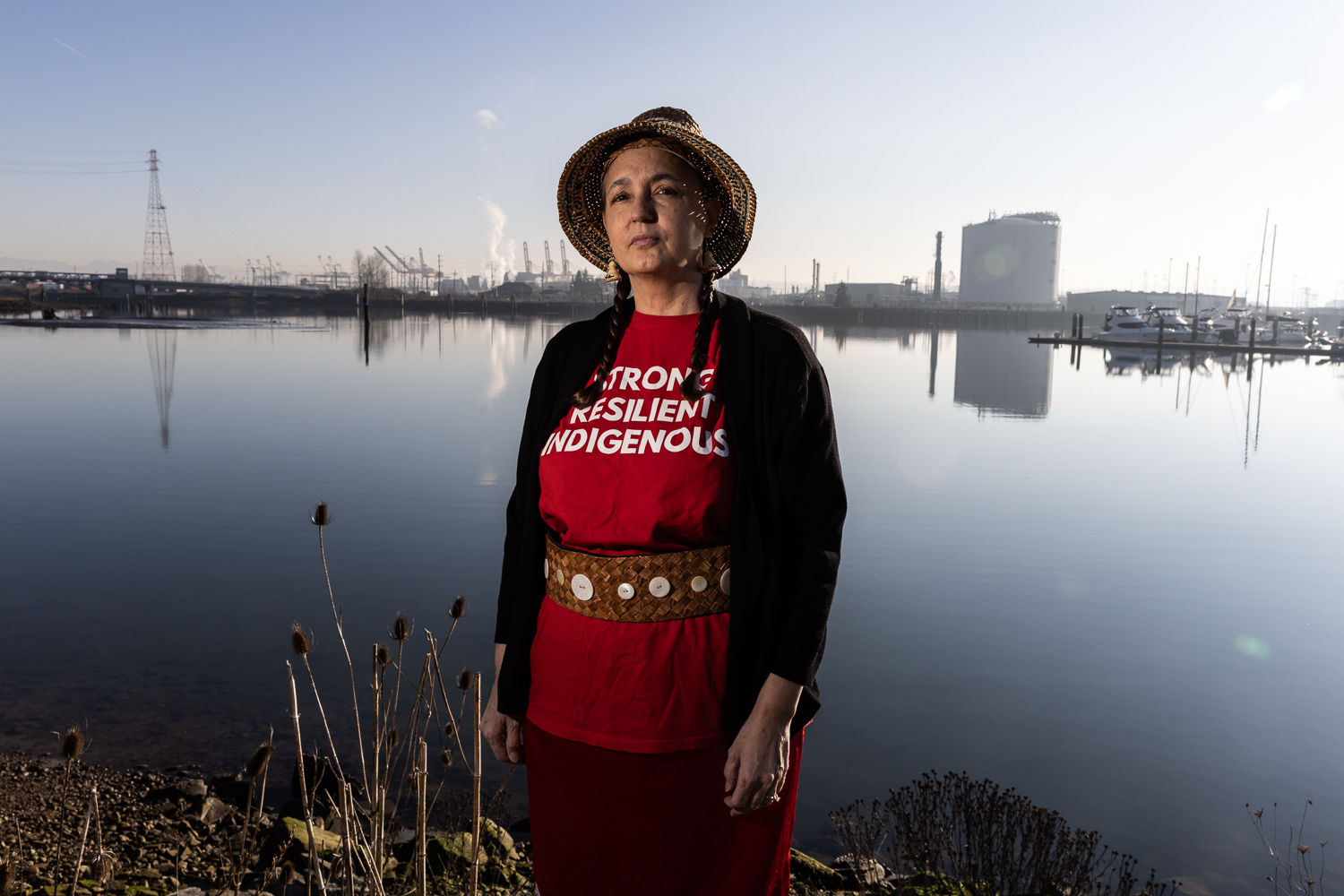 How a Tacoma gas facility started a fight over climate change, sovereignty and human rights

In the Tideflats of Tacoma, Washington, beyond the masts of sailboats anchored in the Puyallup Tribe’s marina, pipelines emerge from the earth and snake their way inland. Their destination — an 8 million-gallon liquefied methane gas tank — was once considered by politicians to be the logical answer to the climate crisis. Now, it’s the center of a local controversy with international implications.

The tank, owned by Puget Sound Energy, is the product of a recent era of proposed climate solutions. In 2012, the Environmental Protection Agency gave the shipping company TOTE Maritime a waiver to switch its operations to methane gas, also referred to as natural gas, in order to encourage it to lower the sulfur output from its diesel emissions. Two years later, PSE signed a contract with TOTE to supply its ships with gas. Against the express wishes of the Puyallup, the 14-story waterfront tank was born.

“The salmon are sick in the water because of facilities like (PSE’s) that continue to pollute us and dump these toxic chemicals on top of us, day in and day out,” Puyallup member Dakota Case told High Country News in January.

The subsequent fight against the tank illustrates the critical place Indigenous sovereignty holds at the intersection of human rights and climate change. On Nov. 19, 2021, the state’s Pollution Control Hearings Board affirmed the issuance of the final permits necessary, which require PSE to monitor sulfur dioxide and volatile organic compound emissions. The Puyallup Tribe and a coalition of environmental groups represented by EarthJustice immediately appealed, arguing that the facility and its associated operations would hamper decarbonization at a life-or-death moment for the planet. They were joined by some unlikely allies: immigration advocates, who fear that it would endanger detainees in the nearby Northwest ICE Processing Center, and pensioners from Canada, who object to having their retirement funds used to help pay for the tank. The opposition, like the tank itself, is both unique and common, normal but not. Given the kind of climate solutions likely to be offered by settler-colonial institutions, it might be a glimpse of the future.

SINCE TIME IMMEMORIAL, the Tideflats have been the Puyallup’s home. The tribe came to the water to fish, traveling by canoe to gather plants for food and medicine. Prior to colonization and industrialization, shellfish were abundant at low tide. “When the tide was out, the table was set,” said Puyallup Councilwoman Annette Bryan. “So you can imagine all of the tidelands without any industry as just very, very beautiful.”

In the mid-1800s, Gov. Isaac Stevens forcibly dispossessed the Puyallup of their lands, though the resulting Medicine Creek Treaty preserved their rights to fish and hunt. Case said that with the treaty, Stevens made a two-part, largely unspoken, promise: “One, that these treaties shall remain intact as long as the trees grow and the rivers run, and two: You’ll sign these treaties or you’ll walk knee-deep in the blood of your people.” In the 20th century, the tribe won a series of legal and legislative victories, first and foremost against the state of Washington regarding fishing rights, culminating in the Land Claims Settlement Act of 1989, which required the signatories, including the city of Tacoma, to consult with it on projects impacting tribal members’ way of life, especially their right to fish.

The Tideflats are not only vulnerable to sea-level rise and tsunamis; residents are also already in the 80-90th percentile in the nation in terms of cancer risk from air pollution. Toxic releases from industrial facilities, waste treatment storage and disposal, diesel emissions and wastewater discharges have disproportionately impacted the area as well. “It’s my belief that we cannot afford one more facility, especially another fossil fuel facility, that adds to the impacts that are already there,” Bryan said.

The Tacoma Human Rights Commission agreed in a letter it wrote to Tacoma Mayor Victoria Woodards in April 2019, after the city issued a final supplemental environmental impact statement. It warned that “the operation of the (methane) facility would potentially expose the South Sound community to grave environmental risks,” adding that the city had omitted the tribe “from more integral involvement” in the environmental impact scoping and drafting process. A month later, in May, Washington Gov. Jay Inslee withdrew his support for the project.

According to the governor’s press official, however, in a response emailed to High Country News, Inslee lacks authority over the permitting, which lies in the hands of the city. The Tacoma City Council, meanwhile, passed a series of ordinance amendments last November that limited new petroleum infrastructure but still allowed for PSE’s tank. Bryan believes that the federal government failed to uphold its trust responsibility; even if it delegates regulatory authority to local jurisdictions, it doesn’t delegate its trust responsibility. And the government’s responsibility, and the lack of it, can have very real consequences. “If it’s going to impact our inherent way of life, our salmon — anything to do with us — you have to consult with us,” Case said. “We have to give you permission.”

PSE claims that its facility, which would be supplied by pipeline with gas extracted by hydraulic fracturing from Alberta and British Columbia, qualifies as a climate solution because, instead of diesel, it would supply methane gas for cargo ships and construction trucks, as well as gas for PSE’s pipeline network to local customers during periods of high demand. “In the maritime industry, there are currently no other options that can offer the same environmental benefits, so (liquefied methane gas) is the best alternative we have today,” PSE said in an emailed statement to High Country News.

Tacoma’s supplemental environmental impact statement similarly claimed that the project would offset diesel emissions from ships, resulting in a net greenhouse gas benefit. And the Puget Sound Clean Air Agency declined to conduct a Health Impact Assessment, stating that emissions of toxic air pollution would be “acceptable under all applicable requirements.” According to Peter Erickson, an internationally recognized climate expert based in Seattle, the city’s review was fundamentally flawed and misleading. Erickson testified in front of the Pollution Control Hearings Board on March 19, 2021, saying that project-associated methane emissions are inconsistent with state, national and global commitments to reduce emissions because they would increase gas consumption and hinder decarbonization.

The Puyallup aren’t the only people affected by the region’s continued commitment to extractive energy. Immigrants in the Northwest ICE Processing Center, an immigrant detention facility owned by the GEO Group, are also at risk. The center was built next to an EPA Superfund site, now a metals recycling facility. In 2018, lithium-ion batteries in the facility ignited, burning car remnants and emitting fumes that the detainees could smell, according to Maru Mora Villalpando, an immigrant advocate with La Resistencia. “Everybody is saying, ‘This is gonna be terrible if something happens. Tacoma is in danger,’ ” Villalpando said. “Just think about the people that are detained right here.” The GEO Group did not respond to multiple requests for comment.

The poor air quality means that Ivan Sanchez, who is detained at the facility, has to use an inhaler. He said air filtration isn’t properly maintained and the bad air comes and goes. The drinking water is often brown and doesn’t taste right, he added, and bottled water costs detainees $2 a bottle. Conditions are already bad, and the thought that they could be worsened by yet another fossil fuel facility has brought La Resistencia and the Tacoma Human Rights Commission into the fight. In the same 2019 letter to the mayor, the commission found that the tank would “potentially subject (Puyallup) Tribal members and (NWICEPC) detainees, in particular, to a disparate environmental impact in violation of their human rights.”

PSE is owned by the Macquarie Group, a global financial services group, and a consortium of pension funds: the Alberta Investment Management Corporation, British Columbia Investment Management Corporation, the Ontario Municipal Employees’ Retirement System, the Ontario Teachers’ Pension Plan and PGGM Vermogensbeheer B.V. of the Netherlands. The funds either declined to comment or didn’t respond to questions regarding the project’s potential human rights violations. The pensioners themselves include public service employees from Canada and the Netherlands, and at least two are unhappy with the way their funds are being used.

James Rowe, a professor of environmental studies at the University of Victoria in British Columbia said these pension funds represent a massive amount of capital, which could be used either to accelerate or slow decarbonization. Rowe, who draws a pension from BCI, said it angers him that his retirement money is funding the methane gas facility, given that he teaches his students about the importance of climate action and respecting Indigenous sovereignty. Mary Lynn Young, a professor at the University of British Columbia, who recently co-authored a book on Indigenous representation in the media, was likewise concerned to learn her pension fund was being invested in the project. She told HCN that she is in the process of moving her funds to a fossil-free investment option offered by BCI.

But short of the city forcing PSE to pull the plug on the gas tank, there is no clear or immediate solution in the offing. The project instead leaves Tacoma as a near-perfect symbol of the climate crisis: An American city ignoring a sovereign Indigenous nation, waving a climate emergency declaration about in one hand, and a massive tank of methane gas in the other.

FEATURED IMAGE: Tribal Councilmember Annette Bryan on tribal land across the water from the terminal, which sits on the edge of the Puyallup Reservation. (David Moskowitz / High Country News)