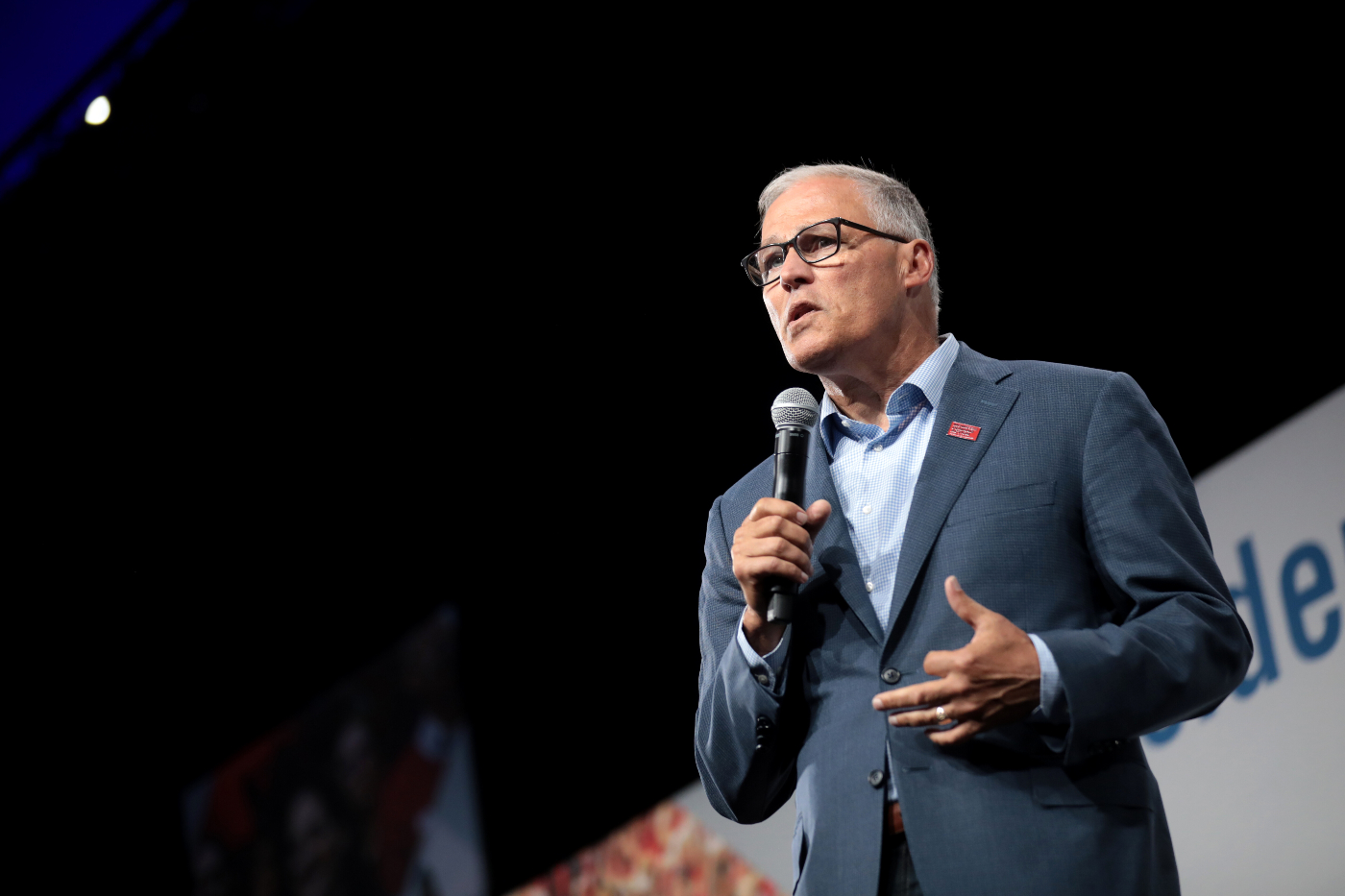 By John StangJanuary 11, 2022No Comments

Lawmakers could look at more than a dozen climate proposals addressing carbon reduction and other environmental issues.

More than a dozen climate change proposals are expected to come before the Washington Legislature in the session that began this week.

Gov. Jay Inslee (above) is hoping to build on last spring’s passage of two major climate measures — a cap-and-trade program for industrial carbon emissions and a low-carbon fuel standard.

The price tag for this wish list: $626 million. Inslee contended that he can find the money without raising taxes or fees.

“Climate change is a rapid tornado of damage going through Washington. … We’ve made progress, but we have not made enough progress,” Inslee said at a mid-December press conference outlining his budget proposals.

Washington’s leaders have blamed global warming for increased wildfires, problems with the state’s shellfish industry, a lack of water for farming and numerous health problems and other troubles.

The ranking Republican on the House Energy and Environment Committee argued that the governor’s proposals would not effectively address wildfires, flooding or drought.

“The governor’s proposal to decarbonize buildings, to get rid of the natural gas industry and retrain workers whose jobs would be eliminated from his policies would do nothing to reduce deadly, destructive wildfires and the smoke they emit,” said Rep. Mary Dye, R-Pomeroy. “The governor’s proposal to spend millions of dollars in rebates for electric vehicle purchases would do nothing to prevent flooding or address drought that threatens our farmers.”

The governor is not the only politician tossing around environmental policy ideas before the Legislature this session.

Other ideas include a new fee on banks that finance fossil fuel projects, predicted to raise $80 million to $100 million for measures addressing climate change. Meanwhile, Republicans want to reroute revenue from Washington’s new cap-and-trade program to the state’s forests and other projects. Also, a proposal to incorporate climate change considerations into Washington’s master land-use law is expected to be resurrected this session.

A potentially bipartisan bill is in the works to speed up government response to droughts.

Inslee and Rep. Joe Fitzgibbon, D-Seattle, and chairman of the House’s Energy and Environment Committee, acknowledged that no governor’s proposed legislative package gets through the Legislature intact. However, Inslee and state Sen. Reuven Carlyle, D-Seattle, chairman of the Senate Environment, Energy and Technology Committee, said Democratic support for the governor’s plan will be strong. Democrats control both houses of the Legislature.

“We have a policy framework, and this package builds on that infrastructure,” Carlyle said at the mid-December press conference.

The bulk of that framework rests in three Washington laws: A 2008 law that sets carbon-reduction targets; a law passed last spring that ordered cuts in carbon emissions from gasoline and diesel fuel sold in Washington; and the creation of the nation’s second state-level cap-and-trade system, following California’s.

Fitzgibbon believes climate change legislation might progress easier through the Legislature in 2022 than it did in the previous two years. That’s because Inslee has taken one of his most ardent critics in the Democratic Party out of the mix.

“With Hobbs out of the Senate, that opens up possibilities we didn’t have in the past,” Fitzgibbon said. The Senate’s Democratic caucus picked Sen. Marko Liias, D-Everett, to chair the transportation committee. He is much further left on the political spectrum than the moderate Hobbs.

Here is a breakdown of Inslee’s package, which is expected to dominate the environmental debate during the 2022 session.

Blaming climate change, Inslee declared a drought emergency last July for all of the state except Seattle, Tacoma and Everett, which have solid municipal water supplies. The measure sent the state scrambling to find money to help local governments and boards buy or divert water or tackle other heat mitigation measures. The declaration sped up processing for emergency drought permits and allowed temporary transfers of water rights.

The state has no designated sources from which to collect money for drought funding.

That drought declaration also activated the Joint Legislative Committee on Water Supply During Drought, which meets only in years when the state declares a drought. “We learned a hard lesson this year. … We need more flexibility in time of drought. We need more certainty,” said Sen. Judy Warnick, R-Moses Lake, and the committee’s chairwoman.

In briefings this year, the committee learned that 2021’s March to August temperatures were the third warmest in Washington history — 2.1 degrees Fahrenheit above average. Fifteen of Washington’s 39 counties posted their driest conditions ever. The easternmost quarter of the state is undergoing drought conditions that normally show up once or twice every 100 years.

Among other impacts, the drought drastically cut into Washington’s crop yields in 2021.

Last year’s wheat crop was 46% of 2020’s harvest, the state’s lowest wheat harvest since 1964. “We had everything from complete crop failures to low [numbers of] bushels [per acre],”  Michelle Hennings, executive director of the Washington Association of Wheat Growers, told the drought committee.

The state’s cherry harvest dropped 20% from 2020 to 2021. Cherries are a major Washington export to Pacific Rim nations. Meanwhile, the northwestern corner of the state produces 85% of the nation’s red raspberries, and this year’s heat cut the harvest by 30% below normal. “Is this a once-in-a-century event or a sign of what’s to come? We don’t know that,” Henry Bierlink, executive director of the Washington Red Raspberry Commission, told the committee.

State officials expect a drought to reemerge in 2022 because Washington would require 150% of its regular rainfall through next spring just to recover the water lost in 2021 in the agricultural breadbasket of the Columbia River Basin. “That’s not likely to happen,” state climatologist Nick Bond told the committee.

Warnick, the senator from Moses Lake, plans to introduce a bill — which she hopes will be backed by both Republicans and Democrats on the drought committee — to provide state grants to drought-stricken communities, better define what constitutes emergency funding, and to speed up the state’s responses to declared droughts. The bill would also likely try to prevent emergency withdrawals from exceeding existing water rights. She said money to pay for these drought responses still needs to be identified.

“I hope we get pragmatic and get something in,” Warnick said.

Besides Inslee’s package, other climate bills are in the legislative pipeline.

Pomeroy Republican Dye plans to introduce a bill that would reroute some money to improve forests in state parks, tackle wastewater polluting Puget Sound and mitigate flood and drought damages “There’s a huge backlog in needed development in our state parks,” Dye said.

However, Fitzgibbon, her committee chairman, said, ”We’re not going to do this.”

Rep. Davina Duerr, D-Bothell, has introduced a bill that would add municipal landfills and limited-purpose landfills to those covered by a state law requiring monitoring and methane collection systems when landfill exceeds specific levels of exuding heat and methane.  Fitzgibbon noted that methane is the second-most voluminous greenhouse gas in Washington behind carbon dioxide.

Duerr also plans to revive a bill that would add climate change considerations to the Washington Growth Management Act. In 2021, the House passed the bill and the Senate Ways & Means Committee recommended approval. But it stalled in the Senate’s transportation committee. The proposal would require comprehensive plans, development regulations and regional plans to support state greenhouse gas emission targets and improve resilience to climate impacts and natural hazards.

Her bill would have required climate change to be considered in land-use and shoreline planning for the 10 largest of Washington’s 39 counties and in cities of 6,000 people or larger. The 10 largest counties cover Puget Sound, Spokane, the Yakima River Valley and the Washington-side suburbs of Portland. A legislative memo said 246 county and city governments would be affected, including 110 jurisdictions outside the 10 most populous counties.

Carlyle, the Seattle senator, plans to introduce a bill to create a “climate resiliency fee” on global financial institutions in Washington.

He wants to add a surcharge to a financial institution’s business and occupation tax, the state’s tax on a firm’s gross income. He expects the surcharge to raise $80 million to $100 million annually for climate resiliency measures, such as creating public cooling centers, relocating infrastructure at risk from floods and sea level rise, and helping farmers and communities obtain critical water supplies during more frequent and severe droughts. The bill would reduce the surcharge as the affected institution decreases its investment in fossil fuels — eventually reaching zero when a bank’s investments in fossil fuel projects reach 5% or less of its 2022 level.

“One of the most profound lessons from the UN Climate Summit conference was that global banks have financed almost three times more fossil fuel than clean energy projects since the Paris Agreement in 2016. At the same time, these same banks have made commitments to design net zero portfolio investments by 2050. This bill is simply asking those funding climate change to pay a modest fee toward the cost that Washington taxpayers are currently spending on climate resiliency,” Carlyle said when he announced the proposed bill.

A bill introduced by Sen. Jeff Wilson, R-Longview, would require the Washington Department of Ecology to set up a program by 2024 covering how manufacturers of wind turbine blades would recover overused blades and recycle the materials.