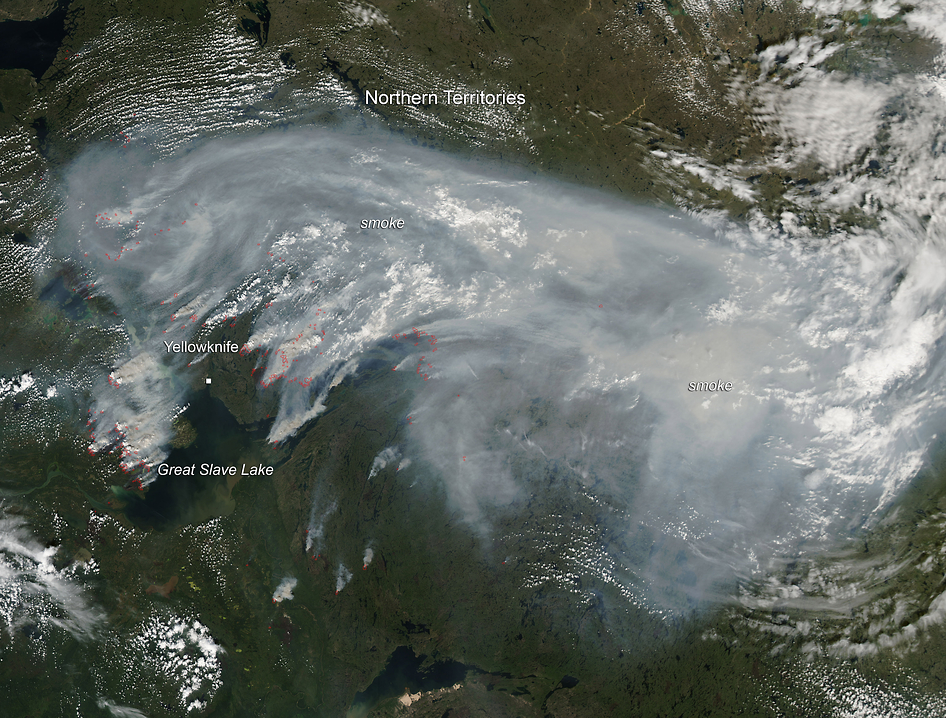 Editor’s note: Wildfires are growing in frequency and intensity, threatening our landscape, our lifestyle and our health. “Smoky Skies, Altered Lives” probes how the upsurge in fire and smoke fueled by climate change puts us at risk, and how restoring the health of our forests could make a difference.

VANCOUVER, BRITISH COLUMBIA – Emergency physician Courtney Howard vividly remembers the summer of 2014. Communities like the one she lives in —  Yellowknife, in the Northwest Territories — had finally made it through the dark, cold winter. She was ready for a few months of blue skies and warm weather in the otherwise snowy subarctic of Canada.

Then, in mid-June, the fires came. That year in the Northwest Territories, nearly 400 fires burned 3 million hectares (about 11,563 square miles). An additional nearly 1,429 square miles burned farther south in British Columbia. Smoke came at Yellowknife from all directions. “We basically didn’t go out from mid-June through August,” recalls Howard. That made her 1-year-old cranky — and made Howard’s work more difficult.

“We saw so many people with respiratory illnesses,” recalls Howard, who in addition to being an emergency room doctor is president of the Canadian Association of Physicians for the Environment. And with climate change progressing apace, “we felt like this was just the beginning.” 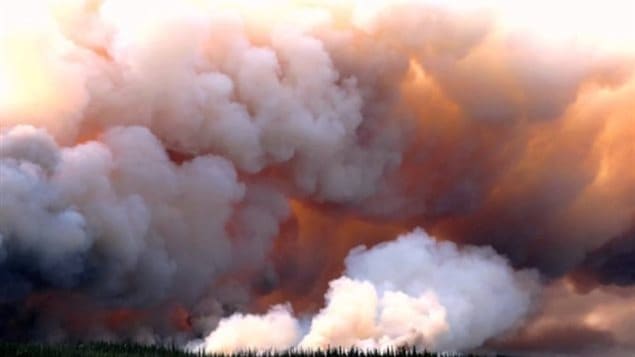 It turns out that Howard’s prediction was right: 2014 was a harbinger of change. The 2017 fire season was even more extreme, with British Columbia under a state of emergency for most of the summer and more than 65,000 people forced to evacuate. Some 200,000 tons of smoke billowed into the atmosphere.

One community, Prince George, recorded levels of  PM2.5 — a category of fine particulates — at 1000 parts per million (healthy air quality is anything under 50 parts per million and readings over 200 are considered “very unhealthy”).

But partly because of its devastating fires, Canada is leading our understanding of smoke’s impact on human health. That effort has been led by Sarah Henderson, a researcher at the British Columbia Centre for Disease Control.

Using a British Columbia Ministry of Health database, which captures all patient information in the province, Henderson has looked at how forest fires impact respiratory illnesses like asthma and chronic obstructive pulmonary disease, or COPD.

Her findings help illuminate who is most affected, and how that information can be used by local officials to determine what to do in a forest fire, such as requiring evacuations and opening “smoke shelters,” buildings with special air filters. And they’re important for the American West as the region reckons with a “new normal” of summer wildfires—and can receive smoke from forests burning in Canada.

Henderson’s groundbreaking research looks at how asthma inhaler dispensing numbers change during wildfires. Considering data from 2003-2010, Henderson and colleagues looked at information from air quality monitors to classify areas of British Columbia as fire affected, and non-fire affected, during wildfires. They also classified certain days as “extreme” when the smoke became especially intense. Using data from the provincial health ministry, the team then  tracked the number of asthma inhalers filled during wildfire events.

Part of what they found was not particularly surprising. In wildfire affected areas, inhaler dispensations went up by 6% even with a small increase of 10 parts per million of fine particulates. That sort of fluctuation can be seen many times throughout a day. Non-wildfire affected areas didn’t see the same jump. 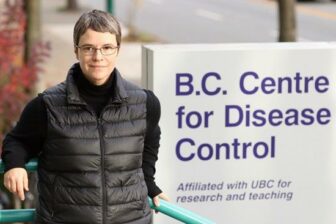 Sarah Henderson of the British Columbia Centre for Disease Control and her colleagues have set up a monitoring system to look for early and unexpected increases in inhaler demand and asthma-related physician visits.

But they also found that the spike stayed elevated up to four days after the smoke went away. And they found that on extreme wildfire days, inhaler dispensations went up for everyone studied, by 7% for each increase of 10 parts per million of fine particulates. This means that everyone breathing in smoke may be affected, even hundreds of miles away.

After that initial 2013 study, Henderson and colleagues continued their work, comparing the relatively smoke-free summer of 2016 with the more fiery summers of 2017 and 2018. They found a 40% increase in asthma inhaler demand over the combined wildfire seasons, with about 43,000 extra inhalers given.

Doctor visits for asthma surged nearly 20%, which translates into about 10,000 extra visits. Another study led by Henderson found an increase in ear infections for fire-impacted populations, about half of them children under age 10. The team documented the uptick even in Victoria and Vancouver, far removed from fires but still affected by smoke.

This was the first study to show this unusual side effect, although other research has shown ear infections can result from other fine particulate matter: from traffic pollution, wood-burning stoves and tobacco smoke. The study also hinted that there may be an increase in heart attacks, strokes and other heart troubles, but there wasn’t enough evidence to definitively tie those to wildfire smoke.

Thanks in large part to Henderson’s work, British Columbia health authorities are now ahead of their American counterparts in preparing for smoke. Henderson has set up a monitoring system to look for early and unexpected increases in inhaler demand and asthma-related physician visits. Such spurts are important, as they can demonstrate even moderate health impacts from unhealthy air that may soon affect the larger population. Weekly reports now go out to health officials, which can help them to make decisions around emergency management, funneling extra resources like health care workers where they may be needed or setting up smoke shelters before a major spike occurs. The system has now been improved to use smoke forecasts for the coming 48 hours to predict health impacts across the province.

Henderson says that all the research has made British Columbia “well ahead” of Washington and Oregon. “We have real time surveillance systems that are constantly looking at the air quality and the asthmatic response,” she says while sitting in her small office at the disease control center, a photo of a wildfire framed behind her.

Authorities have also put together a one-page summary, based on Henderson’s research, on how to stay safe during forest fires.

“There is a very concerted, unified effort, with unified health messaging, making the information available for people to use,” says Menn Biagtan of the BC Lung Association. “This is unlike previous years where we’re all struggling, each agency has different messaging. But now the province has come up with one unified voice.”

Still, Henderson thinks British Columbia isn’t doing enough to respond. “We’re better organized than we used to be, but we don’t have anyone specifically assigned to dealing with wildfire smoke when wildfires happen. There’s nobody at the Ministry of Health with particular expertise in this issue.”

MENTAL HEALTH TAKES A TOLL, TOO

Back in Yellowknife, Howard is grateful for Henderson’s work, which she says is leading the way the world thinks about wildfires and health. But a focus on respiratory health may just scratch the surface. Based on Howard’s 2014 smoky summer, she realized, “there’s a whole bunch of things you wouldn’t have thought of that come up. For example, you have a whole bunch of evacuated people in a gym space, and then suddenly, you think, where’s your needle exchange program? How do you maintain someone’s safety in those situations? How do you provide care to people?” 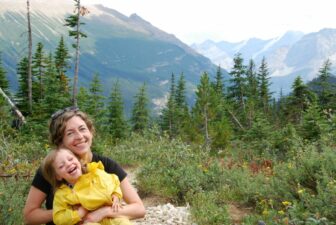 Courtney Howard and her daughter Vivi in the mountains of British Columbia. During a smoky summer in the Northwest Territories, the emergency room physician saw a huge spike in patients with breathing problems. She says mental health is a big issue, too.

The constant smoke also restricted other regular activities—like getting medicine refills, putting some people at further risk of getting sick.

Howard encourages towns and cities to consider things like smoke shelters and to plan for indoor recreational activities and medical needs in advance, rather than just reacting to an emergency. “We need to take a more proactive approach and identify vulnerable people, like elderly people, ahead of time,” she said, “and have a way of getting to them.”

But planning can’t address everything. In 2014, “people felt really isolated and irritable” after being trapped inside, Howard says. These sentiments were captured in a series of interviews conducted by Howard and other researchers. They found that the daily interruptions impacted members of First Nations communities, whose members couldn’t participate in traditional activities like berry picking or hunt for traditional food sources like elk.

“It was like we didn’t have a summer, for me, because usually we get outside, we do things on the water,” a First Nations woman who lives in Yellowknife told the research team. “We enjoy being outside. We enjoy the environment. We enjoy cooking. Everything that’s outside, we enjoy, and I feel like I lost that…That impacts you emotionally and mentally.”

“Mental health remains the big elephant in the room,” Howard says. “There’s this big sense of eco-anxiety”—stress about the earth’s changing climate. “We’ve been focusing on the respiratory impact, but mental health has been neglected. We need to up our game on that.”

Next in InvestigateWest’s “Smoky Skies, Altered Lives:” The mental health challenges that follow wildfires and other disasters; one community’s mental health self-help solution; and what you can do to care for your mental health after a disaster.