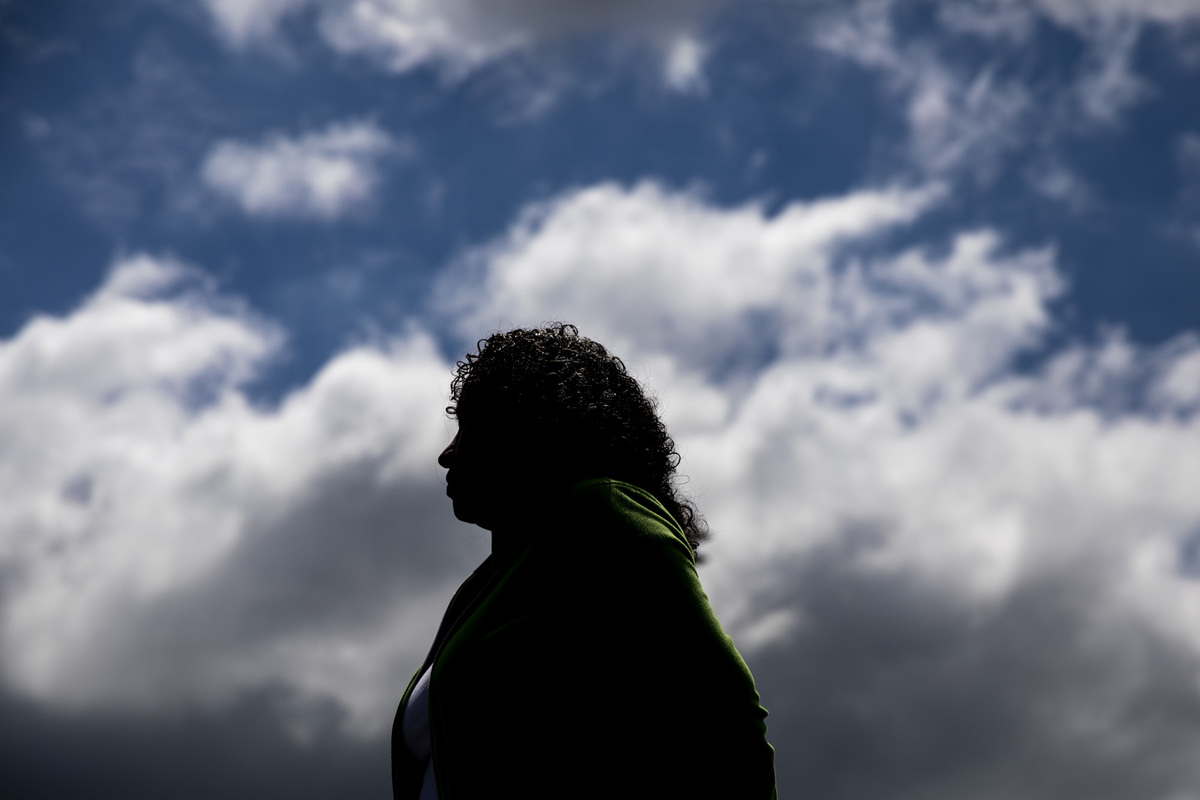 Undocumented workers, a crucial cog in the economy, are left in poverty amid coronavirus

Home » COVID-19 » Undocumented workers, a crucial cog in the economy, are left in poverty amid coronavirus

On the last day he drove for Uber, in mid-March amid increasingly urgent appeals from government officials for Washington residents to stay home, Carlos took off from his Eastside home on a gray Pacific Northwest morning. The day was like many before. As usual, Carlos headed across Lake Washington for downtown Seattle. But fares were scarce. When he got home that afternoon, the 56-year-old who’s originally from Colombia had barely $12 to show for the day. 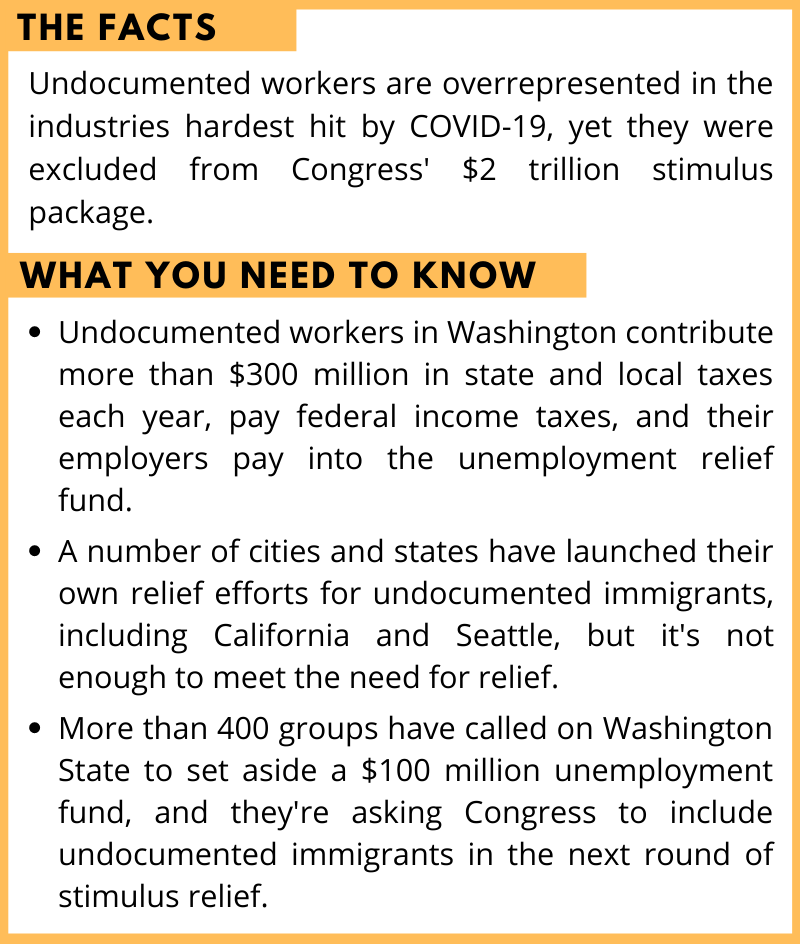 That was it. Carlos hung up his keys. He feared catching COVID-19, while failing to actually make a living.

Carlos hasn’t worked since then. He’s received notifications from Uber about how to apply for unemployment benefits. He’s read about stimulus checks being sent out by the federal government. But Carlos is not eligible for any of that. He’s being identified by a pseudonym in this story because he doesn’t have legal immigration status in the U.S and fears being deported or fired.  His wife, who cleans houses and also is undocumented, now is able to work only one day a week. Their $4,500 a month combined income has dwindled to almost nothing.

U.S. citizens and lawful permanent residents “can make requests for unemployment and other things,” said Carlos, who fled Colombia 20 years ago after receiving threats from criminal organizations. “But us no, nothing, absolutely nothing.”

“I spent what little savings I had,” he added later in an email.

Undocumented immigrants are among the most impacted as COVID-19 sends the country into an economic slump, yet they are being left out of stimulus efforts. Activists are asking federal, state and local governments to set aside money to help people like Carlos, who are out of work and not eligible for unemployment benefits or emergency relief funds. But while the effort is receiving some support in Seattle, it has yet to catch on in Olympia. And efforts in Congress to include undocumented immigrants in the next round of stimulus legislation appear unlikely to succeed.

“We have a responsibility to take care of families across our state and cities, regardless of immigration status.” ~Seattle City Council President Lorena González

Undocumented workers are overrepresented in the transportation, construction and service industries, according to the Pew Research Center. Those are among the industries hardest hit by COVID-19 in Seattle. Employers of many undocumented workers — about half to three-quarters of them — pay into the unemployment relief fund, regardless of their workers’ status. Yet people without legal status were specifically written out of the $2 trillion stimulus package Congress passed in March. Their U.S. citizen children are also excluded.

In response, a number of cities and states have launched their own relief efforts for undocumented immigrants. In May, California offered $75 million in stimulus payments to undocumented workers despite budget shortfalls. There is pushback: Pundits on Fox News demanded to know why people who are in the country in violation of immigration laws should receive taxpayer help. And the idea has drawn significant fire on social media.

Nevertheless, the Seattle City Council passed a resolution calling on Washington state, which is  facing a predicted $8.8 billion budget shortfall, to set aside a $100 million unemployment fund for undocumented workers. In a letter to Gov. Jay Inslee and legislative leaders in April, a coalition including labor groups, civil libertarians, faith leaders and immigration advocates asked for the $100 million fund. More than 400 such groups signed off on the letter including Washington Jesuit leaders, Working Washington and the Northwest Immigrant Rights Project.

In Olympia, few legislative leaders have weighed in. House minority leader J.T. Wilcox, a Republican from Yelm, and Senate Majority leader Andy Billig, a Democrat from Spokane, didn’t respond to requests for comment for this story. House Speaker Laurie Jinkins, a Tacoma Democrat to whom the activists’ letter was addressed along with Billig, referred questions to Rep. Javier Valdez, a Democrat from Seattle, who voiced support for the measure but stopped short of predicting relief is on the way from Olympia.

“The question is, if we don’t get assistance from the federal government, we have a lot of demands here on the state government, including a projected revenue shortfall,” Valdez said in an interview with InvestigateWest.

Proponents of creating the fund for undocumented workers, including Seattle City Council President Lorena González, point out that undocumented immigrants pay taxes. That’s particularly significant in Washington, where there’s no state income tax, meaning that sales and property taxes that support the bulk of state government revenues are paid, regardless of immigration status.

Carlos owns the Kirkland townhome where he and his wife raised their two children, for example. According to the Institute on Taxation & Economic Policy, undocumented immigrants in Washington pay more than $300 million in state and local taxes each year. An analysis by the center showed that undocumented workers in Washington are taxed at a higher effective rate than in any other state.

“Right now, it’s necessary to help [undocumented workers], it’s necessary to support us, because we support the economy of this country.” ~Teresa, a 50-year-old woman from Mexico who lives in Federal Way and volunteers for OneAmerica

“We have over 250,000 undocumented immigrants in Washington state who pay into our state and local tax system and don’t see a single benefit out of that when they need it the most,” González said. “We have a responsibility to take care of families across our state and cities, regardless of immigration status.”

Speaking to reporters in May, Inslee said his office was looking into whether such a fund could be created without legislative approval. An Inslee spokesman said it’s still being explored, “but nothing is finalized.”

“The governor’s staff are working on it in communication with stakeholders along the way,” Mike Faulk, the governor’s spokesperson, wrote in an email. “We do not (know) yet if the proposal would be something the governor enacts through his office or if it is something that would need legislative approval.”

The city of Seattle makes its relief services, like food banks and rental assistance, available to immigrants of any status. A tax plan proposed by council member Teresa Mosqueda last week would raise $17 million this year for financial assistance to immigrants and refugees, regardless of their immigration status.

González said she’s “interested in” the idea of setting aside money specifically for undocumented workers. Yet she also said it’s an issue that falls to the state because many undocumented immigrants, even those who work in Seattle, can’t afford to live in the city limits.

“Like many undocumented people in this country, we work for minimum wage,” said Teresa, a 50-year-old woman from Mexico who lives in Federal Way and volunteers for OneAmerica, an immigration and refugee advocacy organization. OneAmerica is one of the groups at the forefront of the push for the relief fund. “Right now, it’s necessary to help us, it’s necessary to support us, because we support the economy of this country.”

Teresa, who asked her last name not be used because of her undocumented status, said she left her job in childcare shortly before the COVID-19 outbreak because of an injury. Now, as her husband’s hours as a construction worker have been drastically reduced and they’ve struggled to pay their bills, she’s unsuccessfully looked for part-time employment. Their children, two of whom received work authorization under the Obama administration’s Deferred Action for Childhood Arrivals program and one of whom is a U.S. citizen, have helped.

But since the coronavirus shutdowns started, Teresa and her husband weren’t able to always pay all of the rent for their house in Federal Way. Teresa estimates their monthly expenses, including rent and bills, to be about $2,600. She and her husband have watched the balance on their unpaid bills carry over each month. Meanwhile, she’s putting off treatment for her injured knee.

These nine organizations are collecting donations toward a $5 million goal to provide emergency preventative financial relief to as many undocumented families as possible.

In Washington, a coalition of immigrants rights groups has raised more than $3 million to provide assistance to needy families. It would take more than $15 million, however, to meet the needs of the 17,000 people who have applied, organizers said.

The groups pushing for the $100 million Washington Worker Relief Fund are also asking Congress to include undocumented immigrants in stimulus spending. Legislation passed by the House would open up stimulus payments to everyone in the U.S. tax system, including undocumented workers.  But the measure is unlikely to make it through the Senate. OneAmerica is also asking the state to set up a permanent unemployment fund for undocumented immigrants, said Robin Engle, the group’s communication and development director.

In Kirkland, Carlos said he’s fortunate. His two children both received deferrals from potential deportation proceedings during the Obama administration, married U.S. citizens and are lawful permanent residents, he said. His son is a university professor. His daughter is a social worker. Together they support Carlos and his wife. But that can only go on for so long. Carlos has a $1,480 monthly mortgage payment as well as living expenses, and his children have their own bills to pay.

“We’ve never received help and we’ve never hoped for it,” Carlos said. “We don’t get any of the help that’s being given to American citizens. We know that the money comes out of the same taxes, however we’re not given any of the help from that money. Basically, what we need right now is financial relief … from the debts we need to pay.”

Correction: This story originally misattributed the Institute on Taxation & Economic Policy’s figures on how much Washington undocumented workers pay in state and local taxes, and their effective tax rate, to the Washington State Budget and Policy Center.